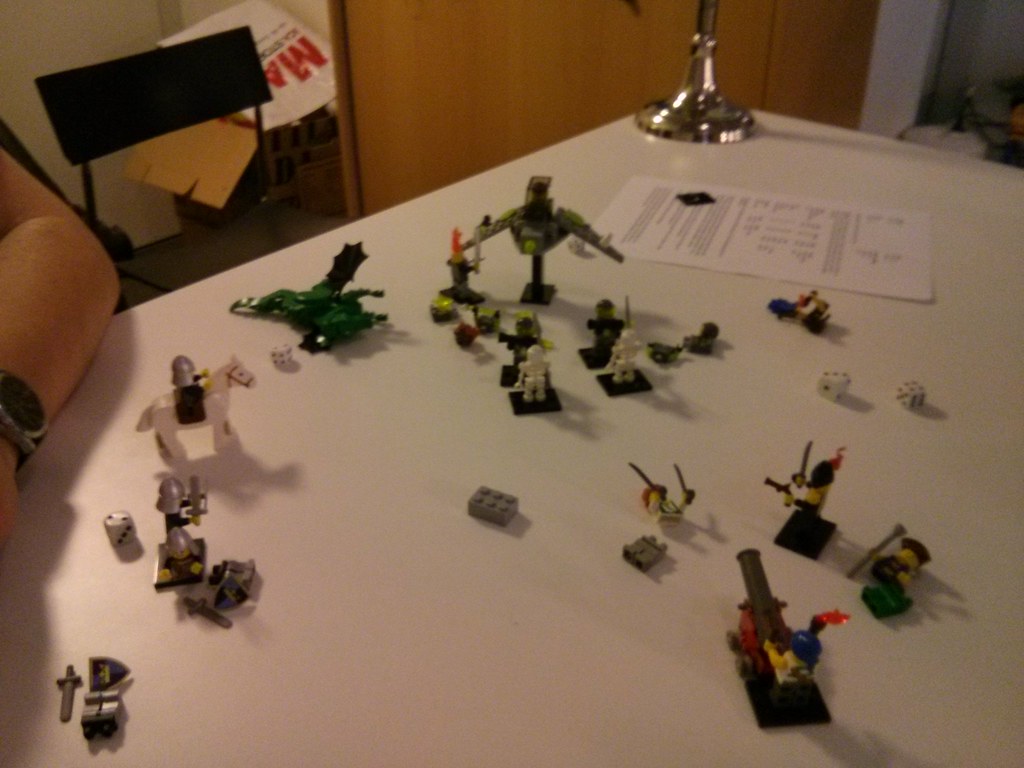 There were discussion about objective cards awhile back and now I made some myself and tried them out.

(The battle was fought using my hack rules. WIth standard rules, the word "round" below refers to the time it takes each player to complete a turn, starting with the first player.)

How to do it
You have a deck of objective cards. At the start of the game, you draw five cards from the deck and place them face up on the table, and place one Victory Point on each of them. 1x2 bricks work well as Victory Points.

When a player completes an objective, they receive all Victory Points on it, and the objective card is discarded.

At the start of each following round, draw new objective cards if there are less than five on the table. Then place one Victory Point on each objective card. This means the longer it takes the players to complete an objective, the more points it will be worth.

A round limit for the game is probably a good idea. We played five rounds, that felt about right.

These are the objective cards we used:

Duel
Kill an enemy Hero with your Hero.

Last Chance
Kill an enemy unit when you only have one unit left.

Monument
Build a stack of at least three corpses.

King of the Hill
Have one of your units on the highest point of the battlefield at the end of a round/the start of your turn.

Heroes of the Air
Do a Heroic Feat that makes your Hero fly through the air.

Infiltrator
Move a unit to the spot where an enemy team started.

Capture the Flag
Grab the flag with one of your units in the move phase and hold it until the end of the round/the start of your next turn.

IDGAF
Do a Heroic Feat that succeeds AND causes the death of one of your other units.

Collateral Damage
Kill two NPC units in one round.

How to improve it
A lot of the objectives above rely on Heroes. That wasn't very fun for the player who lost their Hero early on. There should be more non-Hero reliant objectives.

There should be more objectives overall, really - we ended up going through the whole deck in our three-player, five-turn game.

If you have ideas for objective cards, post them!
The Disc Wars
Top

Looking good! Have you considered the objectives to be multi-staged? That is, they have multiple stages of completion, and for each stage completed you gain a victory point.
For example: you have to repair some sort of mining machine to start digging for resources. Suppose, only robots can operate that machine. So first you need to find and activate a robot (+1 victory point), then you sit him down in the mining machine (+1 victory point), and, finally, you get this machine to the mining area (+1 victory point). Once the machine starts mining, you gain all 3 victory points. You have to complete all three stages for victory points to transfer to you. So, if a robot pilot or his machine are destroyed, no victory points whatsoever.
Of course, this particular example involves you defending something over multiple turns, of which not all BrikWarriors approve, but you get the general idea.

I thought of some others.

THIS IS BRIKWARS
Push a minifig of a high place, and have it die from fall damage.

Use your head
Kill a unit with a decapitated head.
Did you know that 60% of statistics are made up on the spot.
If you say "Gold pool" really slowly it sounds like gullible.
Top
Post Reply
4 posts • Page 1 of 1