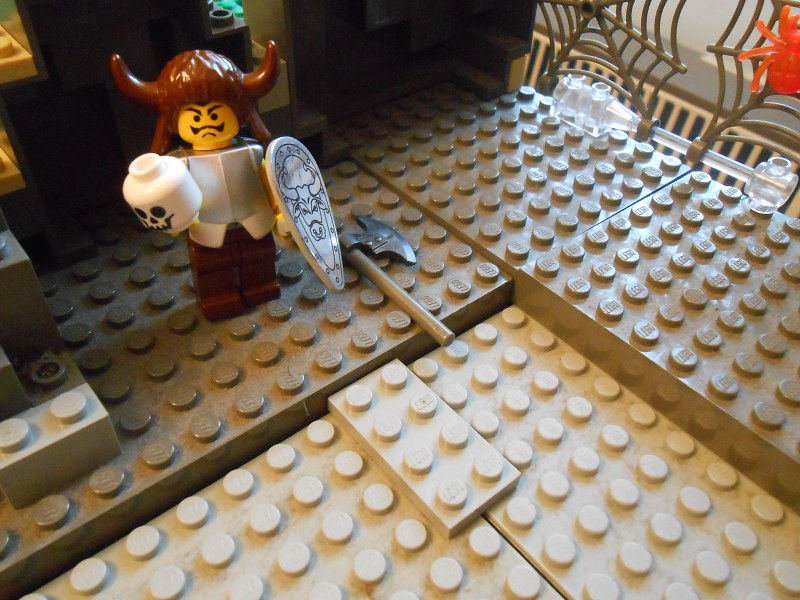 The Shaman picks up Marnix's Shield and puts on the sacred armour. With both these Artifakts in tow he attempts a Heroic Feat, imploring the Bull God to give him moar powah! 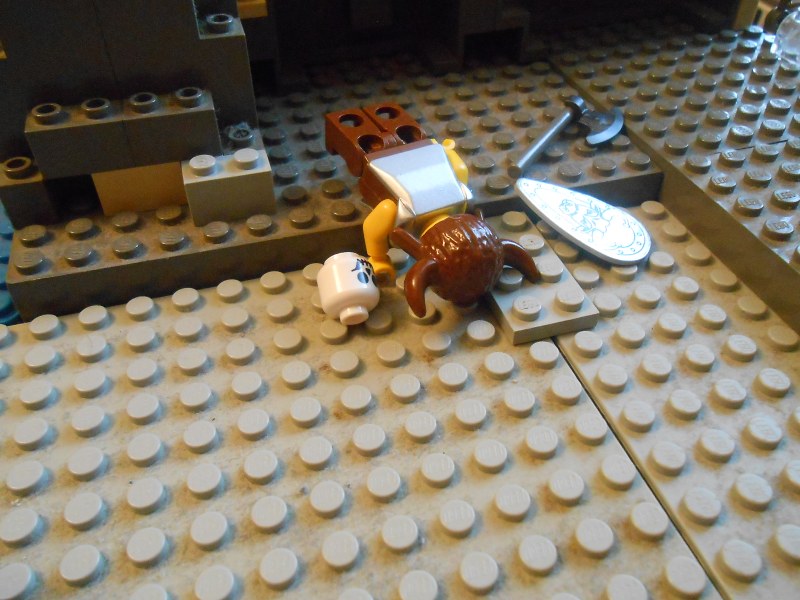 The armour and shield become bright as if lighting up in sudden anger. The Bull God strikes the Shaman down for his insolence. Hasn't he given this weakling enough? First, prove your worth! 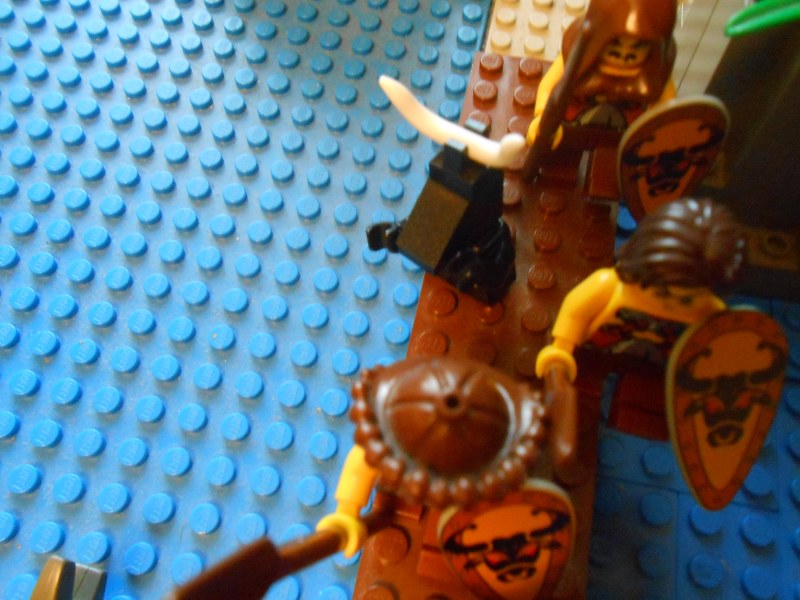 The Icon sadly disappears as the Shaman becomes Incapacitated.

I roll a d6 to see how many rounds the Shaman will be out and roll a '3' (killing him seemed excessive since I only wanted another d6 SN). 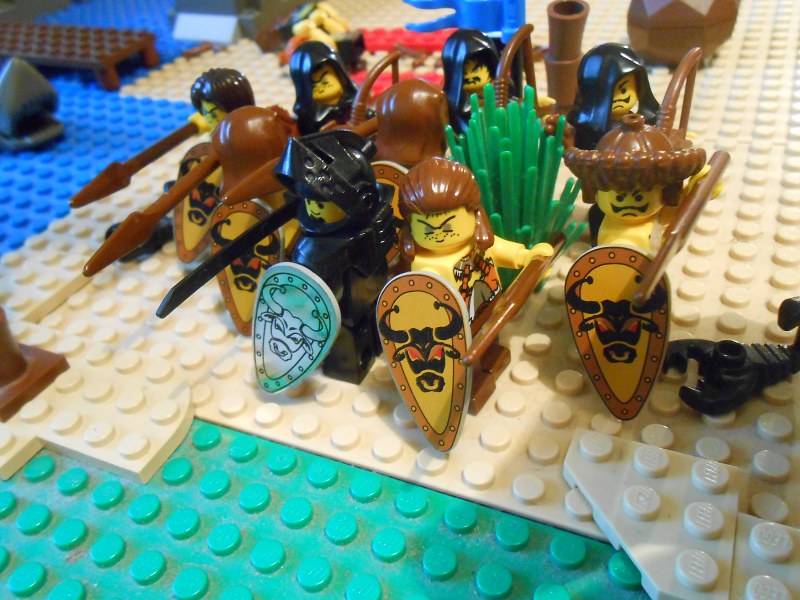 "The days of the phalanx are NOT over! FORM UP, and follow my lead!"

Valarius, not willing to spend another turn dicking around crossing the bridge, rallies his men around him in a wedge formation with himself at its center. As long as the formation holds, any attacks on the Bulls in it must be directed at him. It is a critical success that also removes the earlier attack bonuses the Draklon Raiders gained against him. The Ambushers are eager to take some shots, but seeing the Drakhirri's entrenched position, shields and realizing they're still out of range, their only sane option becomes setting up response fire again.

No replies for 3 rounds but of course for something like that you're on point. 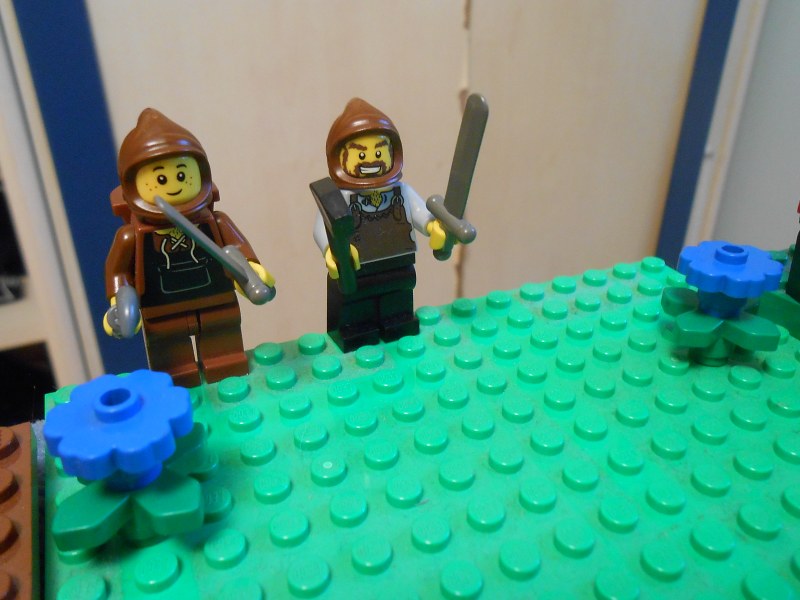 Haldon the Smith and his apprentice walk onto the field, proudly wielding their tools and the swords they've been forging for the Peasant Rebellion. 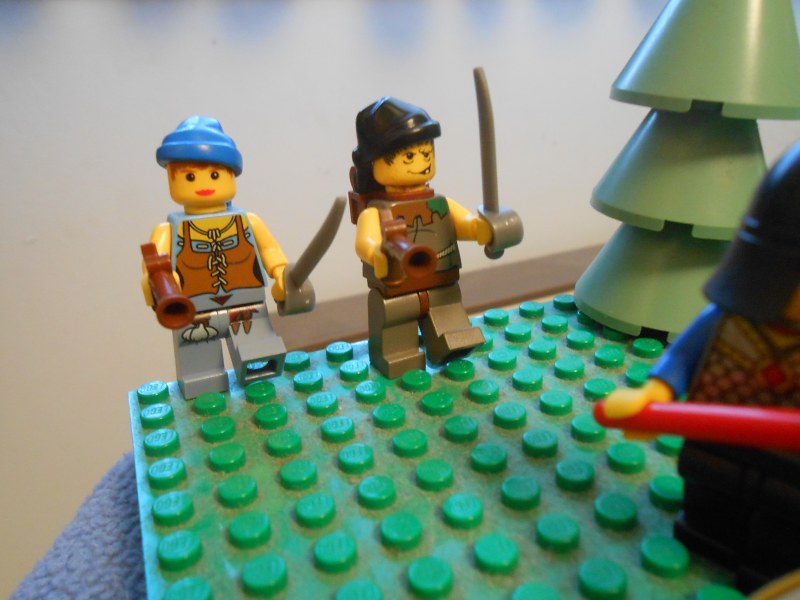 Two Scallywags enter the field. Slimy Pete and his fiance were with the Holy Flame when they fell behind because they went to do some 'scouting'. Now they find their allies locked in a fierce struggle, and about to be buttfucked by a group of Imperial Guardsmen as well! Time to acquit themselves for the Holy Flame! 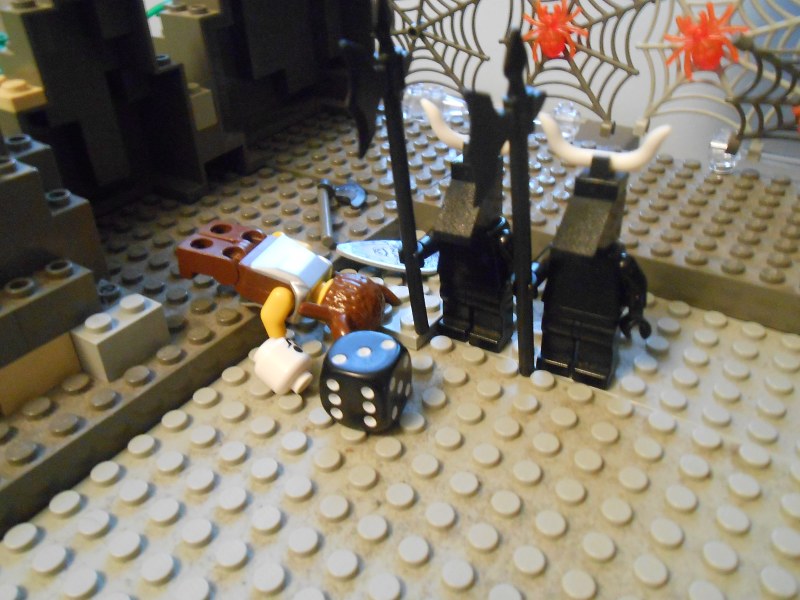 The Bull God, seeing Marnix's armour and shield unprotected, but unable to fault the Bulls for it because they are showing such aggression, summons two Icons to guard them. His influence limited, they are only as strong as the Minifigs surrounding them, but it'll have to do. 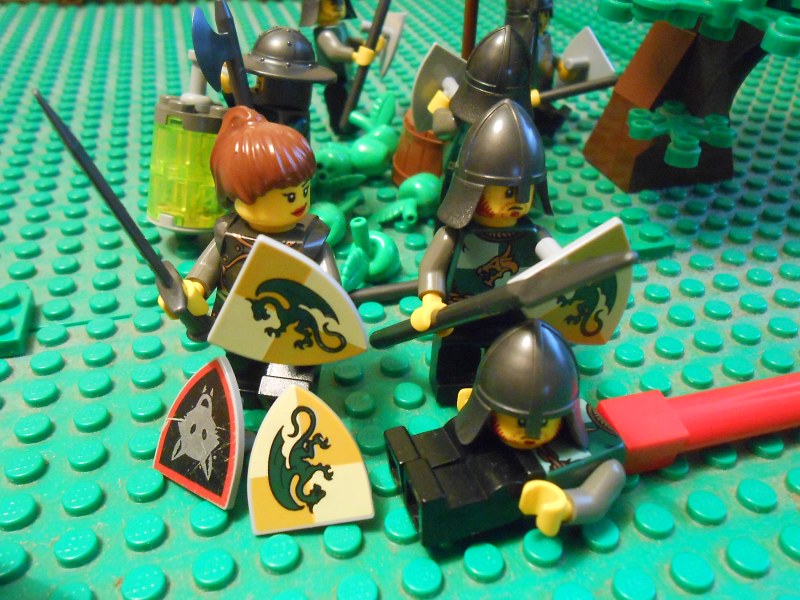 The Matriarch smells something upon the sea wind... 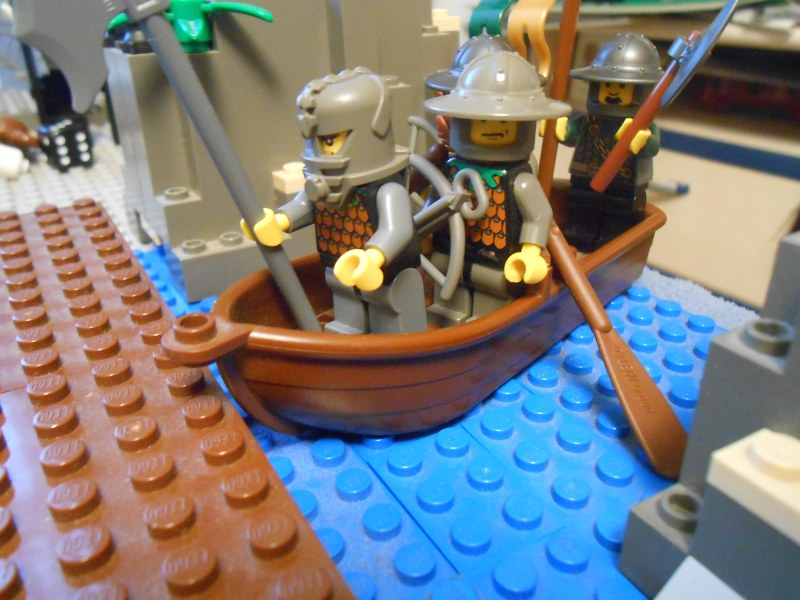 Some Draklon Mariners arrive in the boat they're supposed to get the Arktifakt on. They're not too happy about the amount of enemies in their way, and who the hell put that bridge there?! 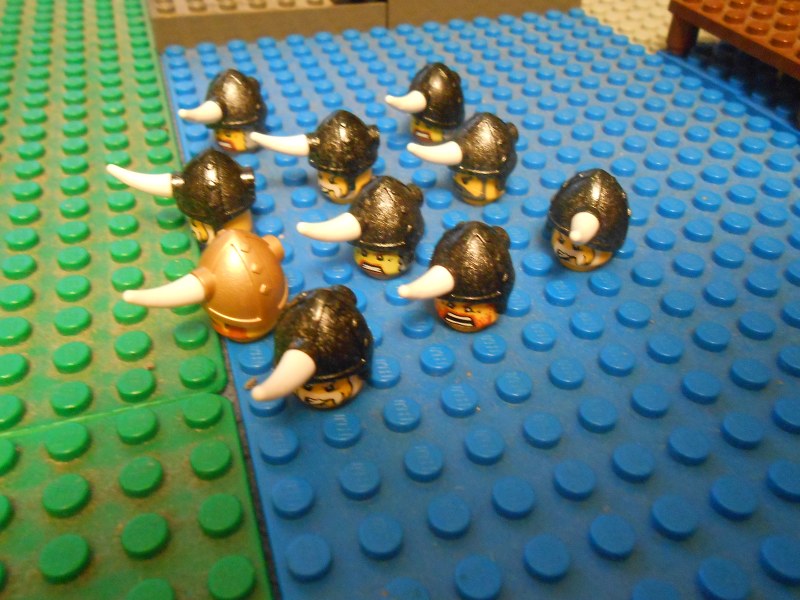 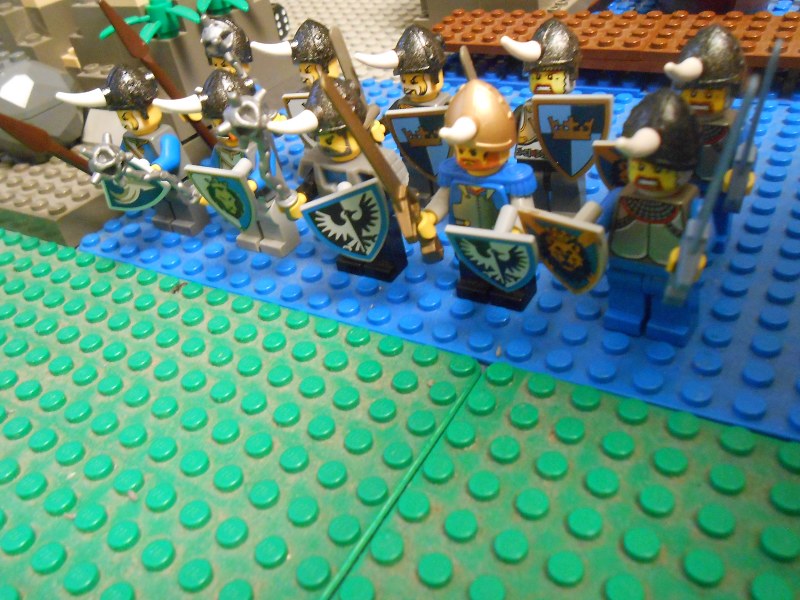 Spear-Demons, Sword-Demons, Macers, a Thegn, and Fishstache, the lot of them! Having spotted the Arktifakt falling down from miles away, and knowing it would draw out many of the Kingdom's rogue warbands, they sped over with a purpose. Let others fight over the Arktifakt, it would be nice to give it to Cales but it's only secondary to them. They're here to kill. All of Cales' enemies must be eliminated! That includes any Drakhirri if it turns out they need to be kept in line! FOR THE EMPEROR! They don't have their special stats for this battle (I wanted to keep everything nice and simple and it would unbalance the fight) but they can move unimpeded through water as always. They're under the command of Red_Rover and will take their turn after everyone else has. 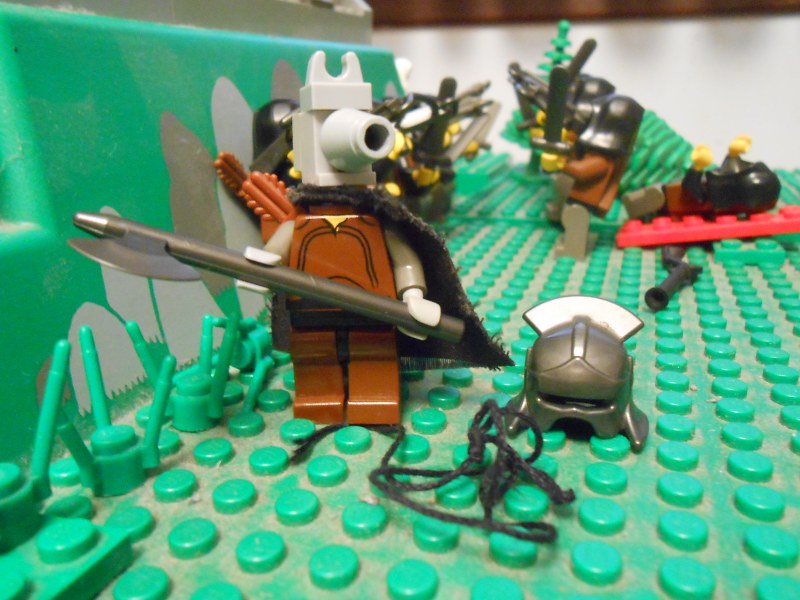 In the face of this adversity, the Gang Leader decides he's worn his silly helmet for long enough and that it's time to show his true face! He is the legendary thegreywolf, quite possibly a creature somehow connected to the Brittanian League's Admiral Blackdog, but who can really know for sure? His full potential now revealed, he gains a bonus die to his Heroic Feats as if he were wielding an Heroic Artefakt (in game terms his head is the Artefakt, and enemies can stop him from using it by cutting it off).

Ok, now you can send your orders! 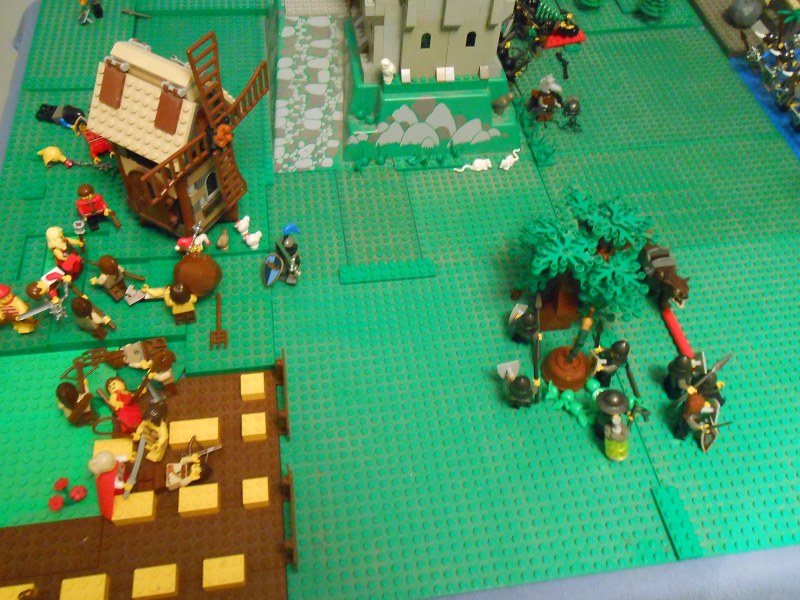 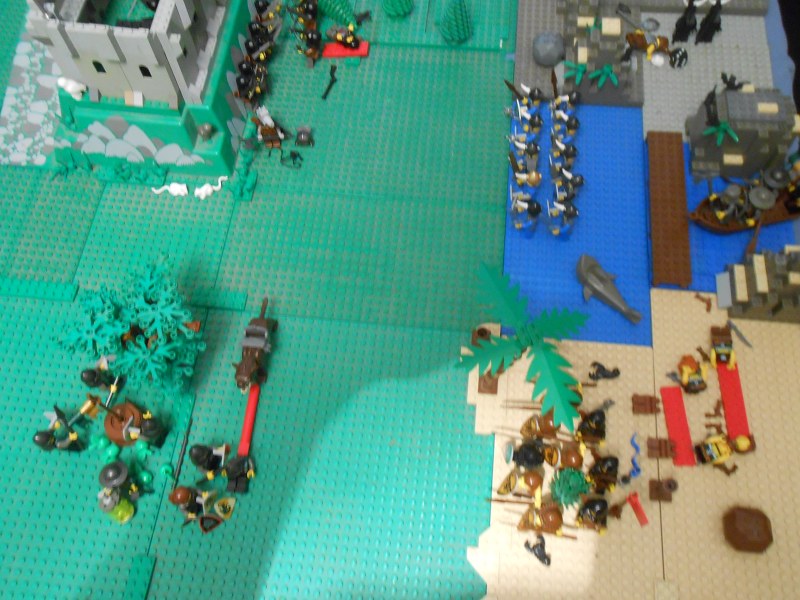 A shadow falls over the battlefield, like that of some higher being that's regarding these events with mirth, and decreasing his own picture quality while he's at it...
Westeron Restored (Fantasy BrikWars)
My Twitch - My blog
Top

This just got a whole lot more interesting. Does Thegreywolf have any special stats?
Times banned by Natalya: 8 (+ 1 alt).

No but he has slightly higher odds of succeeding his heroic feats since he rolls an extra die for them compared to before (like Valarius has been doing).
Westeron Restored (Fantasy BrikWars)
My Twitch - My blog
Top

Mind posting an Overwatch picture of my corner of the map? I want to see where the newcomers are in relation to my troops. 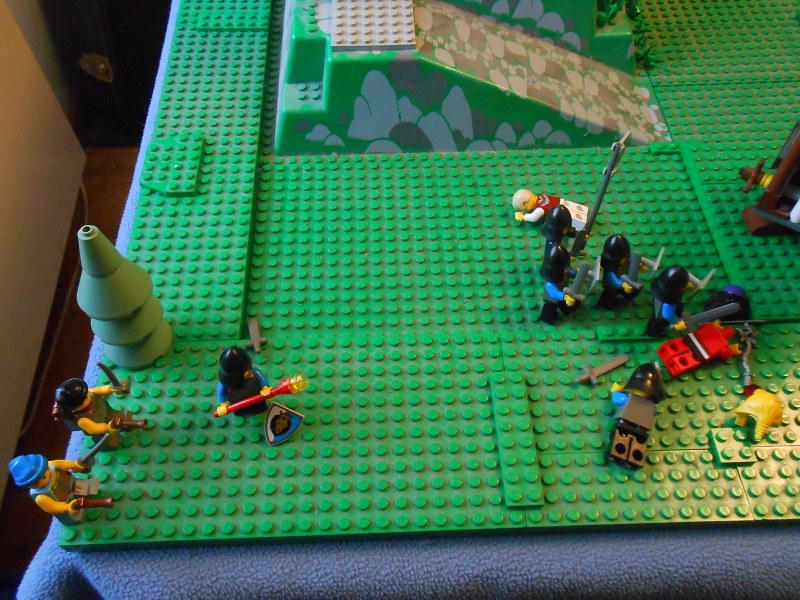 Have you guys noticed an increase in picture quality? I've started taking the pictures at max size and then resizing them manually instead of taking them at a smaller size as I was doing before. The pictures seem better to me and it's easier to get the camera to focus right but I don't know enough about photography to say whether or not it actually has an impact or I'm just wasting my time. I looked for an answer on the internet but couldn't find a definitive one.
Westeron Restored (Fantasy BrikWars)
My Twitch - My blog
Top

Maybe a slight increase? Then again, that could just be due to lighting differences, I don't know jack about photography. Are you resizing before uploading to Flickr? I usually upload them fullsize and just link a smaller version.
Times banned by Natalya: 8 (+ 1 alt).

I resize them before because the file size on the macro images is like 60 MB, the resized one is 1,8 MB. Makes it easier to store the backups as well.
Westeron Restored (Fantasy BrikWars)
My Twitch - My blog
Top

I haven't noticed the improvement but I mostly browse on mobile.

Have the holy flame start sprinting toward the artifakt.
I make apocalypses and apocalypse accessories.

He's not really running away from you, he's running towards the peasants and the Arktifakt.

You can bite my shiny yellow ass. I want to get my hands on that maniac beer.
I make apocalypses and apocalypse accessories.

Hey now whoever said this was maniac beer?

Kommander Ken wrote:Hey now whoever said this was maniac beer?

And the Big Woof belongs to the Wolfpack.