Hello everyone. Today I have posted a new episode for the Storyline: "Alliances in Nehellenium Galaxy".

In this episode, Dracosiusian learn about the alien threat and start to prepare for the upcoming battle.

I have also uploaded the story to the wiki for orderliness and future reference.
https://brikwars.com/wiki/Episode_12:_N ... sius_Prime

Comments and criticism is welcome as always.

On Dracosius Prime, King Axandrias of Dracosia Kingdom is walking in the gardens along the city walls of the capitol city. He saw his son, Prince Dorian coming towards him in haste. 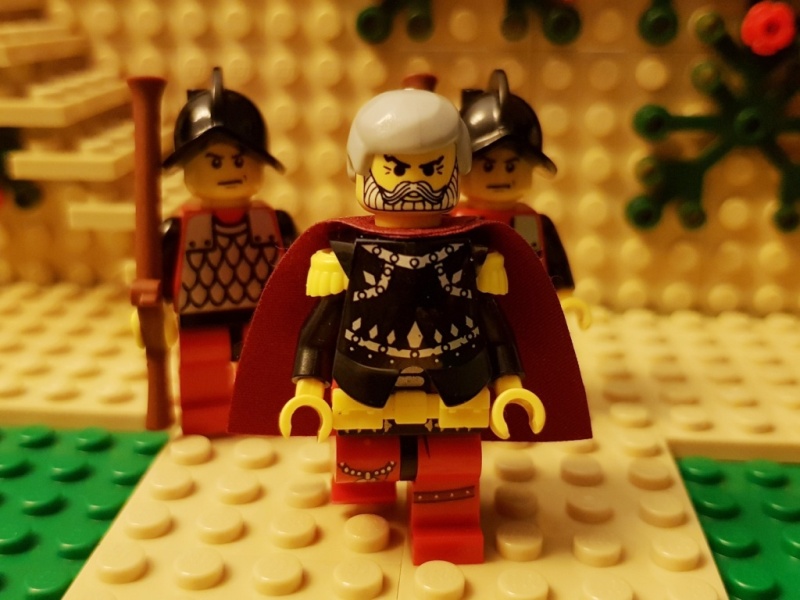 The Prince bows in front of his father, saluting him. 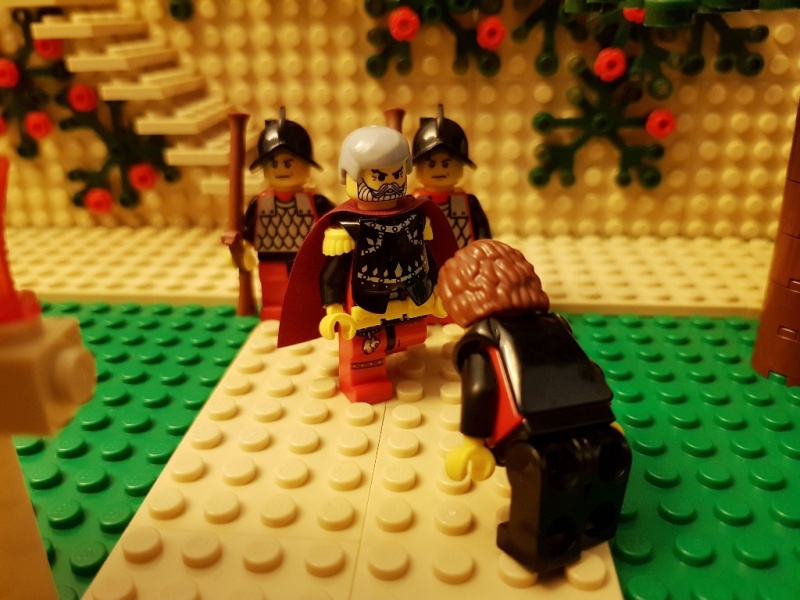 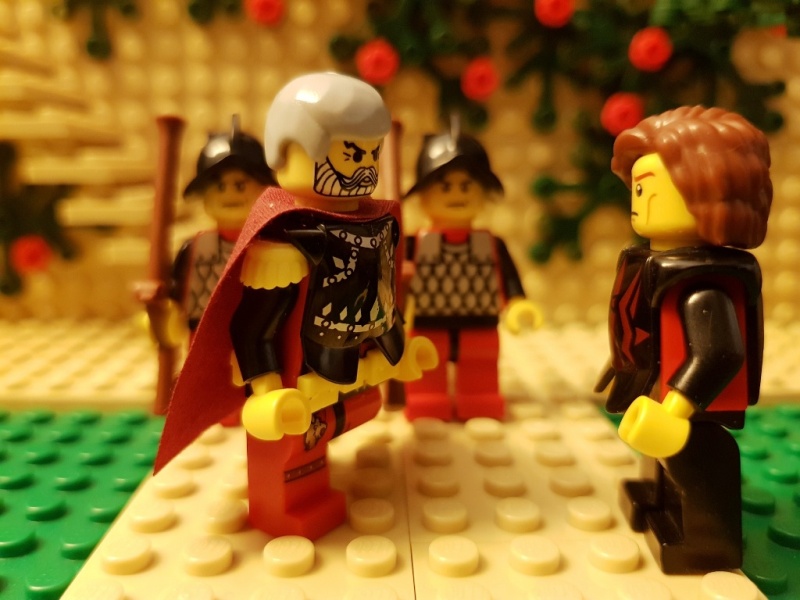 Prince Dorian: Good morning, father. I’m afraid, I have unpleasant news for you.

King Axandrias: You look worried. What is it?

Prince Dorian: Our new friends from the M-Throne Empire inform us about a hostile army approaching our planet. They believe that this could be an invasion force?

King Axandrias: Who are they and where are they coming from?

Prince Dorian: I called the M-Throne Captain Vanshikin here to explain the details herself.

Captain Tiana Vanshikin comes into the presence of the king bowing with reverence. 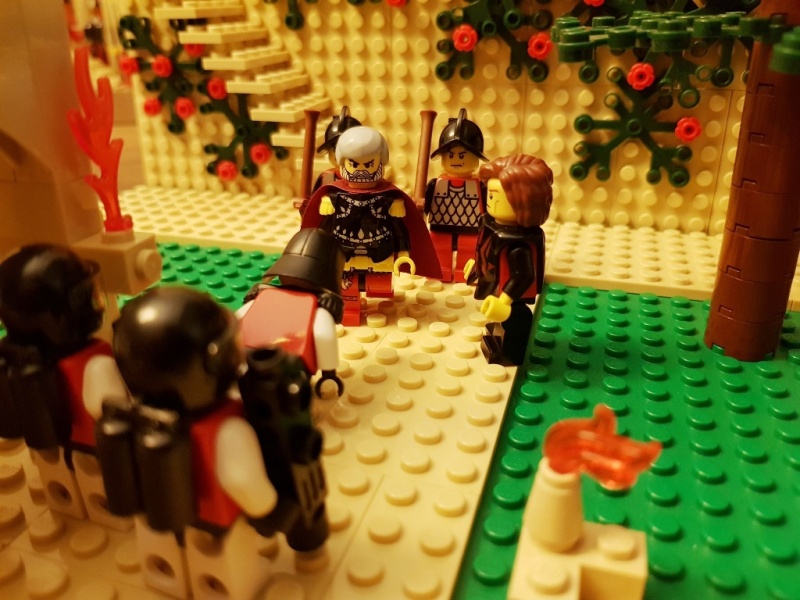 King Axandrias: Nice to see you once again, Captain. Perhaps you could explain me the situation in detail. 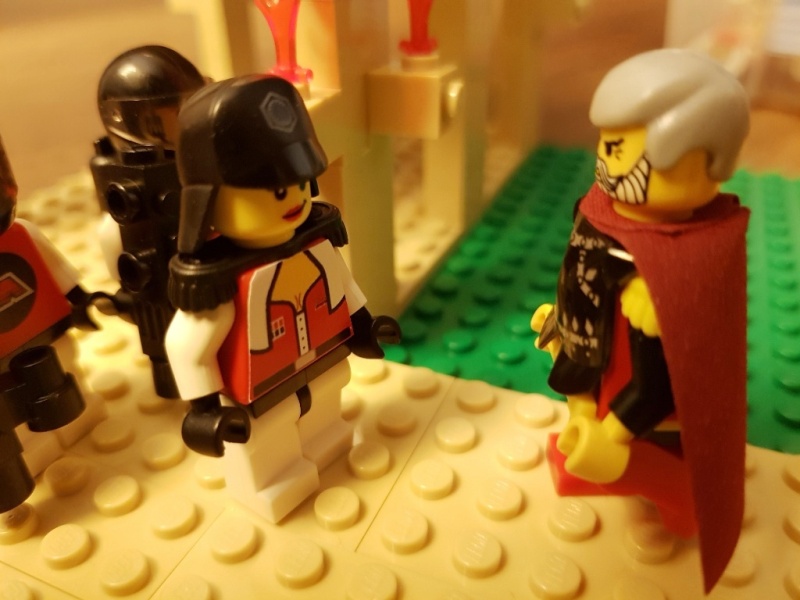 Captain Vanshikin: It’s an honour to talk to you once again, your highness. A greenskin fleet is approaching this planet and their intentions are hostile. We believe that they will directly assault the capitol city.

King Axandrias: What is a greenskin?

Captain Vanshikin: Greenskins are a combination of violent and uncivilised species most of which have green-coloured skins.

King Axandrias: What do these greenskins may want from us?

Captain Vanshikin: They could have a special goal to achieve or they could simply look for war and conquest. Either way, we are in immediate danger and should act quickly.

King Axandrias: What do you suggest, Captain?

Captain Vanshikin: Since you have no anti-space defences in place, the enemy cannot be stopped in orbit. We have activated the energy shield in the military base. The shield will cover the city and protect it from orbital bombardment but also prevent enemies from teleporting inside. We will most likely have to deal with the greenskins in ground combat. You should mobilise every man inside your kingdom, who can carry a weapon.

King Axandrias: That will be done. What would you do? Are you staying to fight with us or leaving us to our fate?

Captain Vanshikin: The Empire never abandon its allies who stay true to the Greater Good. Of course we will fight alongside you.

Captain Vanshikin: We have asked for reinforcements. Hopefully, they will come soon. You should give us a list of important locations that could be a target for the enemy and we will analyse and try to find out their main target, if there is one.

King Axandrias: It will be done.

Not long after the conversation between Vanshikin and the King, he orders every man that can handle a weapon to arms. In the armouries of the kingdom, various weapons ranging from swords to rifles were about to be handed out to draftees according to their skills. 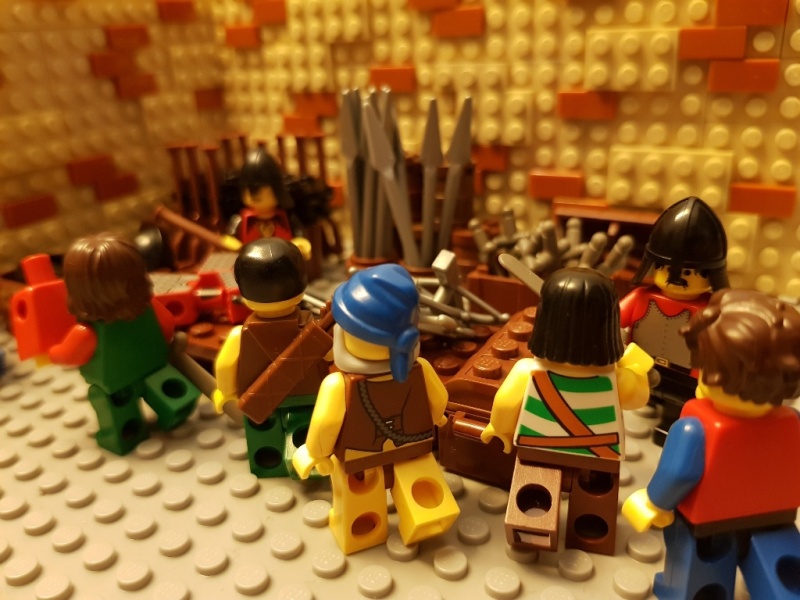 Armoury personnel chief: Take your weapons and more forward to take your uniforms! 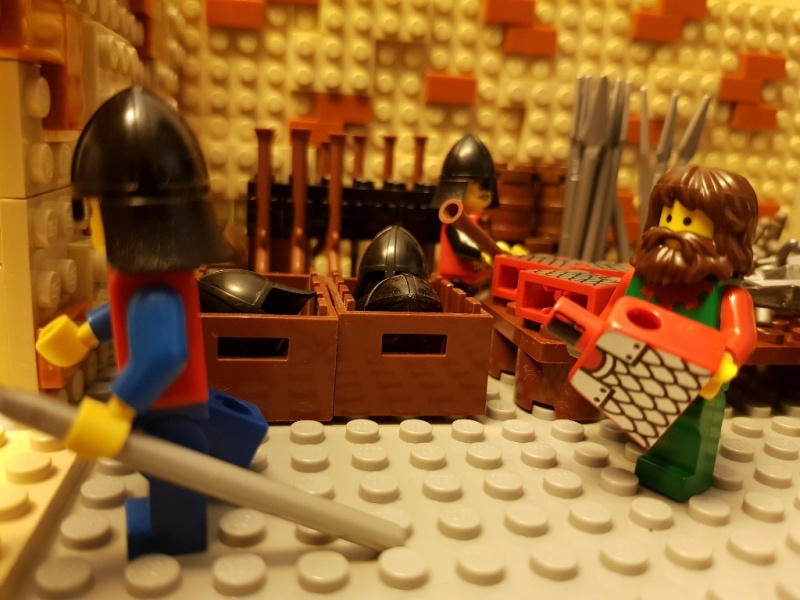 Armoury personnel chief: Hey you, green shirt guy! Make sure you trim your cave man beard before coming to the ranks.

Cavemen like bearded draftee: Alright, alright. I’ll do that. 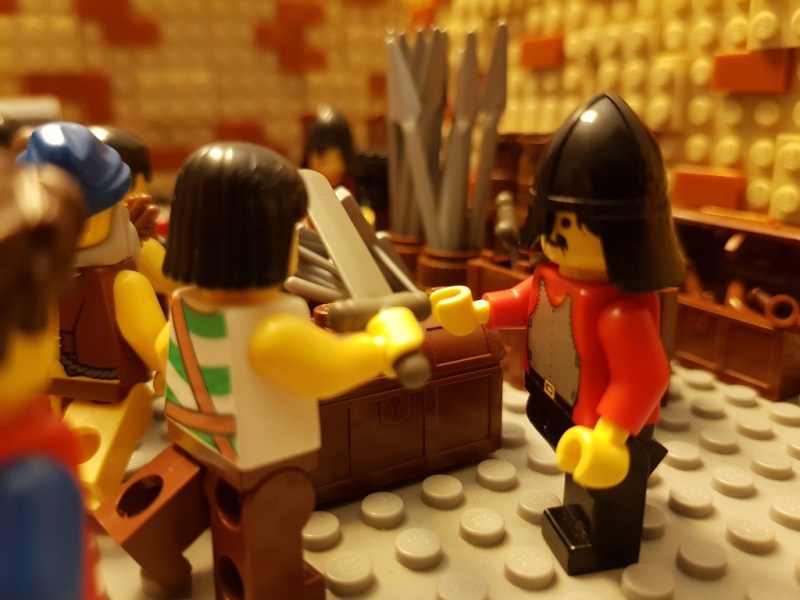 Armoury personnel: Do you know how to handle this?

Drafftee that looks like a pirate: Of course I do. I’m using weapons like these since my childhood. 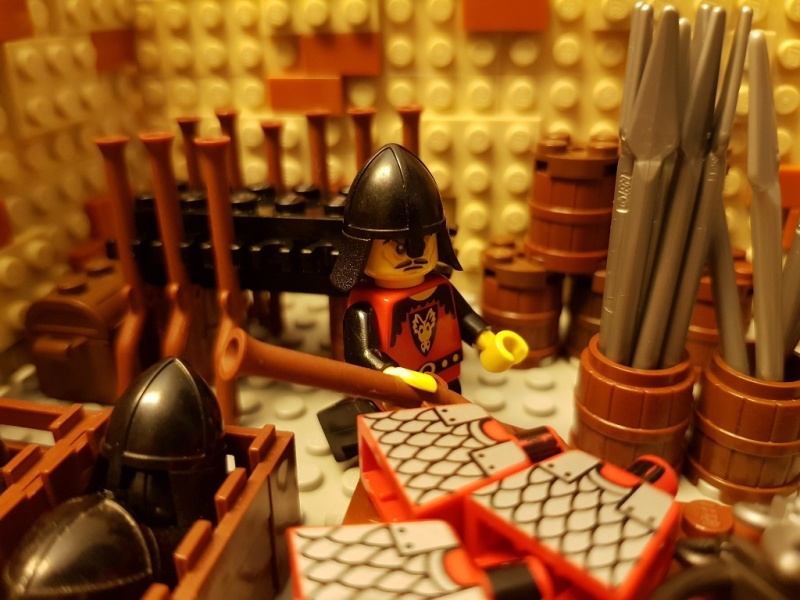 Armoury personnel chief: Hurry up, guys. We have to be ready on the frontlines until dawn.

On the next morning, King Axandrias, Prince Dorian and the king's brother Prince Camadus were discussing the plans and latest news about the enemy. 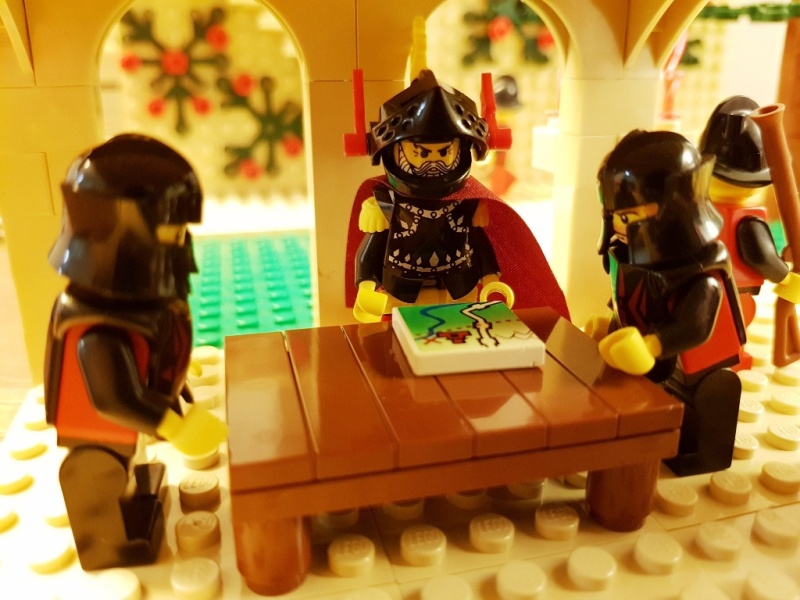 Prince Camadus: According to information we got from our M-Throne allies, the enemy ships has landed outside the city and the enemy shield dome as expected. They are forming their lines in front the city walls, the main focus seems to be… here.

King Axandrias: Here? My guess is that they will try to capture the Emerald Glaive. We should strengthen the defences.

Prince Dorian: Maybe we should relocate the Emerald Glaive to somewhere else.

King Axandrias: The city is surrounded, Dorian. We cannot risk the lives of the civilians inside the city by hiding it there. Besides the walls of Adrian city proved themselves to be impenetrable. And also not only the glaive but the Statue of King Darixus the Great is important for us. It was build right at the location where he first settled to found this city. We can not abandon it to the enemies. 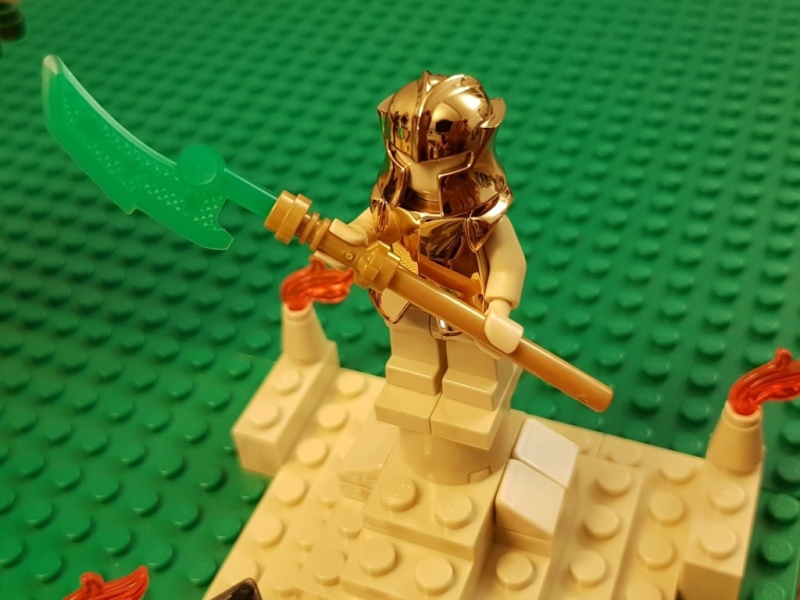 King Axandrias: Emerald Glaive is a heirloom of King Darixus the Great. Legend has it that he forged the glaive from a stone that came from the heavens and can cut through all known materials like butter. Maybe this story means that the glaive is made from an object containing a high tech material that fell into our planet. 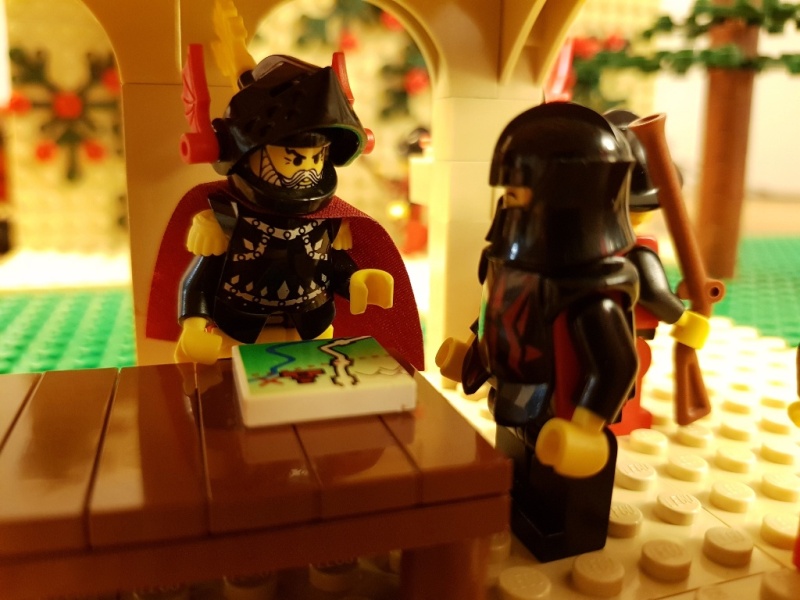 King Axandrias: Camadus. I want you to contact our M-Thronian Allies and inform them about the Emerald Glaive. The M-Thronian forces should reinforce us to protect the Glaive here.

Prince Camadus: As you wish, your highness. 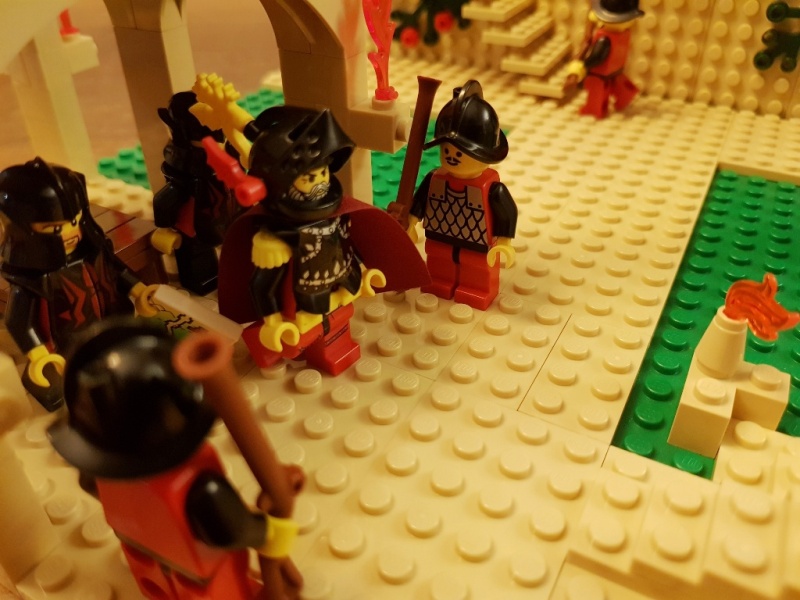 King Axandrias: Dorian, I want you to organise the soldiers on the wall.

Prince Dorian: As you wish, father.

They walked in front of the statue of King Darixus the Great and bowed to show their respect, praying for his spiritual help to gain courage in the upcoming battle. According to Dracosiusian beliefs the deceased kings become some kind of god-like spirits in the heavens. The strongest of these spirits was the King Darixus the Great who was the founder of the Dracosius kingdom. 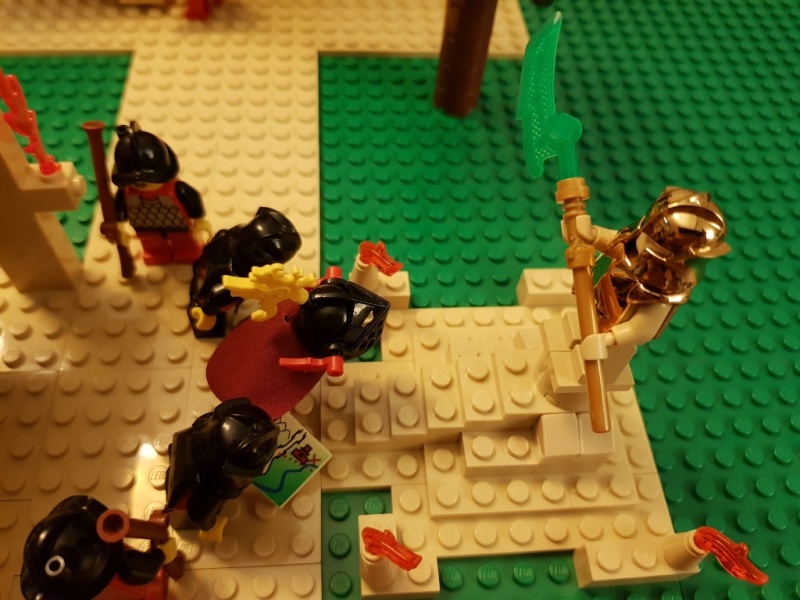 King Axandrias: Dear Darixus the Great, our founding father, protector of the kingdom; send us your blessings from the chambers of the heaven. Strengthen our bodies and minds to protect the kingdom you have left us. 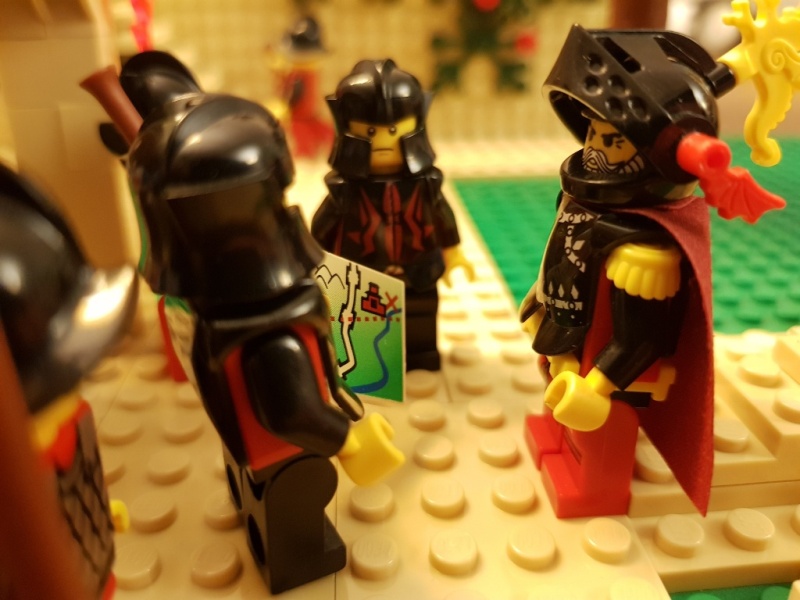 King Axandrias: Get your weapons and execute your orders.

As the Princes were going to get their weapons, a soldier brings the sword called -Flammenbringer- another legendary weapon for he king. King Axandrias has received the weapon after his father's death when he became the king. He used it many times before but he knows that this battle would be the most important one to use it. 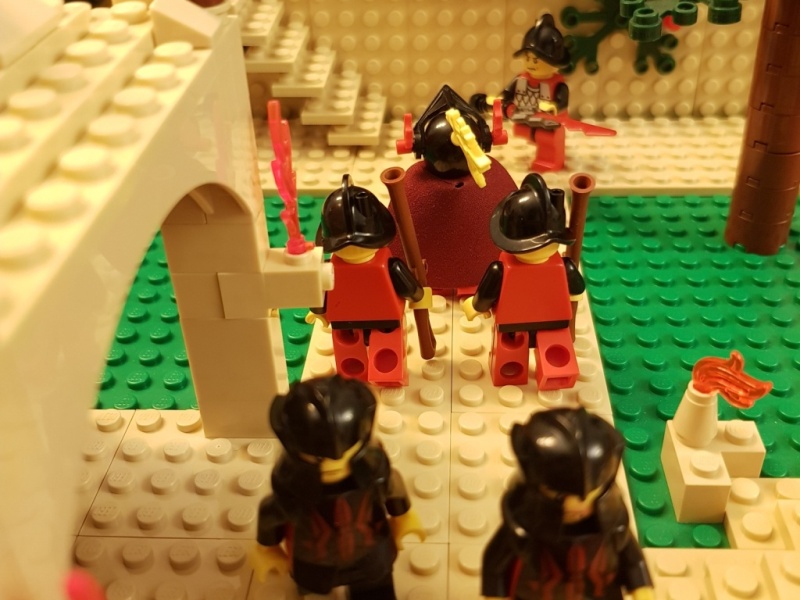