TMITTH
Robot Monkey continues on his "Help Piltogg" crusade. This time by shooting IV horseman in the back.

It breaks IV's helmet AND severs his non-sword arm.

Blitzen/Grammar Inquisition/Assyrians
Blitzen goes for what appears to be a very popular weakness in the Hardsuit's armor. 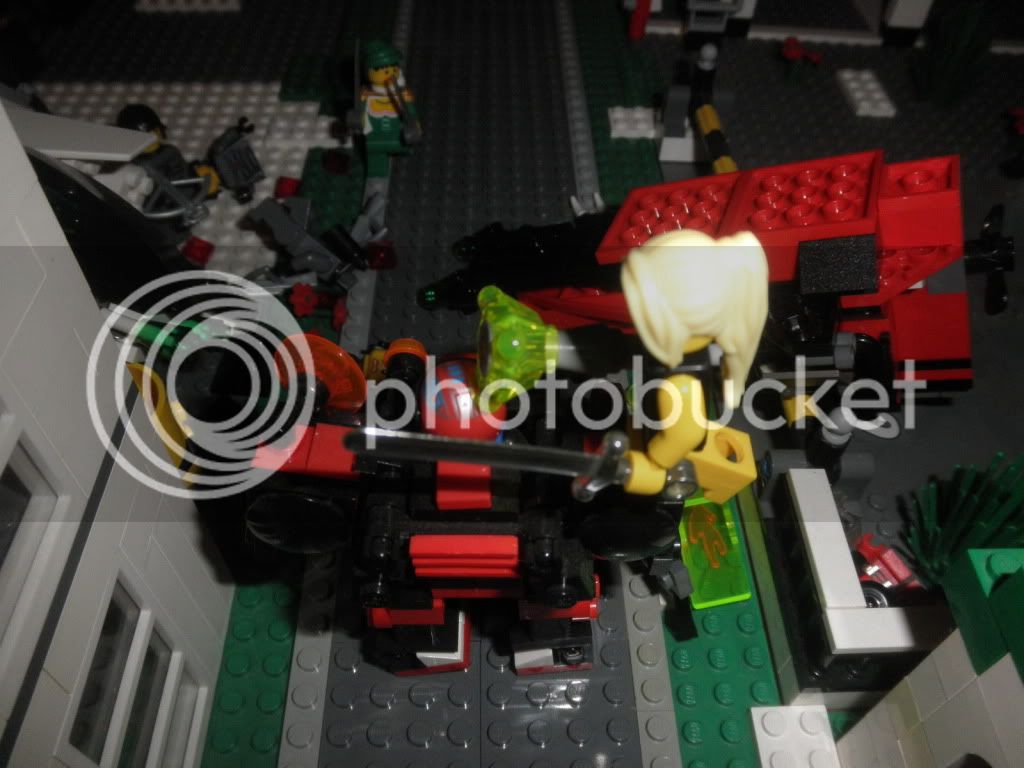 And simply decapitates the Driver. 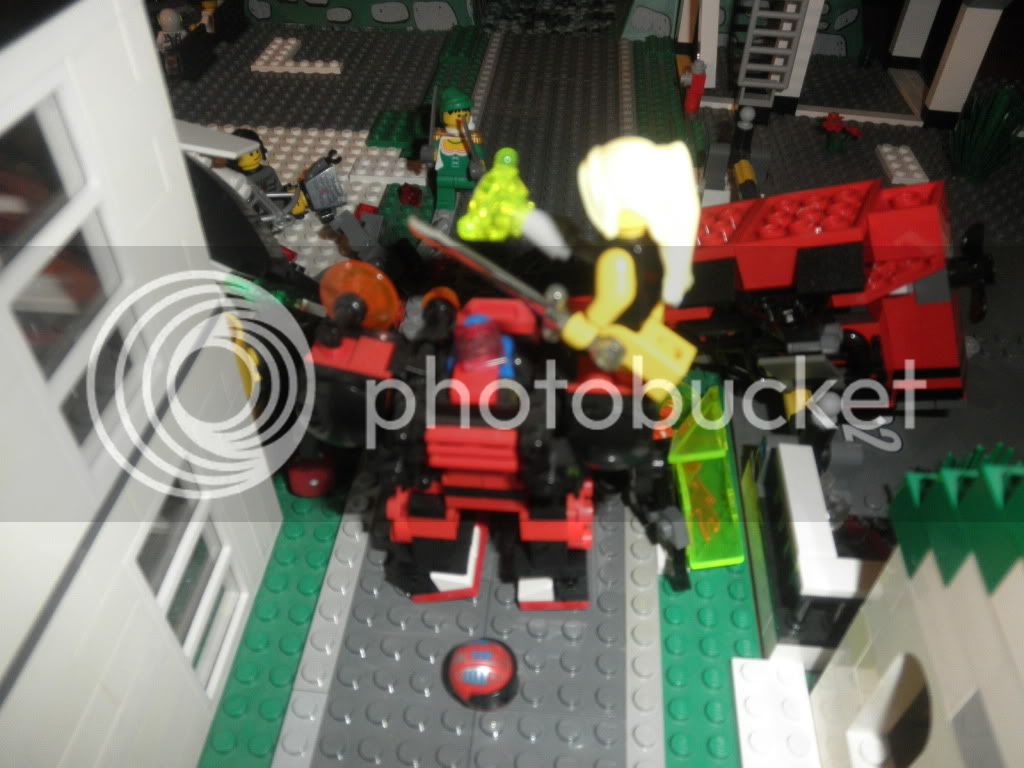 After this, Natalya wanted to "telepathically assault" Vas kallas. I think you probably need to be able to see her for that to work.

In order for that to work out, Blitzen jumps up on the big white building.

And I'm going to translate "telepathically assault" to "verbally assault"
Blitzen: "YOU ARE A FUCKING WHORE! A TRUE DISGRACE TO ALL WOMANHOOD!"

Vas Keels over from the pain of prolonged exposure to Blitzens whinny voice. She wont get an action this turn.

A civilian picks up the dropped Anti-matter gun.

And hurls it up to the sufficiently intelligent Blitzen. She wastes no time, attaching it and the stupendous-featinator, making an even bigger trans-green canon. What the effects of this will be are as of yet undetermined.

A few civilians pile into the newly repaired jeep.

They drive a bit down the road, but their way is completely blocked off by rubble and broken vehicles.

They would have liked to fire on the gremlins, but have no line of sight.

Meanwhile, Cpl. Vesuvius and the remaining grunt try to capture the decapitated Hardsuit.

The inquisitor clambers up the side of the pile'o'rubble.

And kills off TMITTH's civilian vigilante friend the fireman.

Natalya should note that the Anti-matter's range is restricted to this.

Is the round over? Can we send orders?

Robot Monkey wrote:Is the round over? Can we send orders?

I have already played out the whole turn. It will just take me a while to type up the report and whatnot.
Top

Space Nazis/Ninjas/mech
The gremlins rear their ugly head, having spotted a new and highly valuable target.

Too late.... Blitzen gets stunned amidst a pile of rubble. She should be fine by the start of next turn though.

A Piltogg clambers in Blitzens general direction, but has no LOS on anybody.

Medic Droid raises another one.

Theres a bit of Ninja vs. Ninja action going on over at the wall.

The red one wins out this time.

the Siegfried wanted to fire on super-tank.... But its WAY out of range.

So it takes out a few of the Beradan infantry instead.

It seems I forgot to give the Assyrian his turn.... oops.

He kills the Akkadian he had been dueling with.

For some reason I don't pretend to comprehend. Moronstudios switches uniforms with one of the housecralls.

He then runs down the wall a bit.

And fires into the Akkadian Flag bearer, incurring his death.

Piltogg and Heroes of Akkadia
Piltogg tries to get a new angle on IV horseman.

Dinosaurs did cry from up in the heavens at the passing of IV horseman, one of the all time greats of the forum. (they must not know about the regeneration tubes)

....anyway. Piltogg now has control over 4 out of nine artifacts of pre-creation.

Two fanatics enter the field, crying the glories of this day and their master.

BURP man grabs some more pieces off a building to throw next turn.

And a couple of slaves up in a building complain that nobody has noticed them up there yet.

more on it's way soon.
Top

Beradan Raiders
Super tank finds out that its too big to fit through on this side.

It knocks down some fences and stuff and fits through anyway.

The mechs out of range, so it shoots at the bicycle thing.

Destroying it and the ladder quite completely.

Given that they are not going to be able to shoot pass the tank and they can't fit past it either, the other Beradan vehicles take an alternative route.

They use their combined engine power to knock down the wall.

And it gets another pic for being awesome/unusual.

The Beradan infantry didn't have orders, so they hop down from the wall to throw in their lot with the rest of the Beradan army.

Iceworlders
Their leader having been slain, the remaining iceworlders retreat to their inner sanctum.

They blow down the thin back wall. and bail the hell out of there. 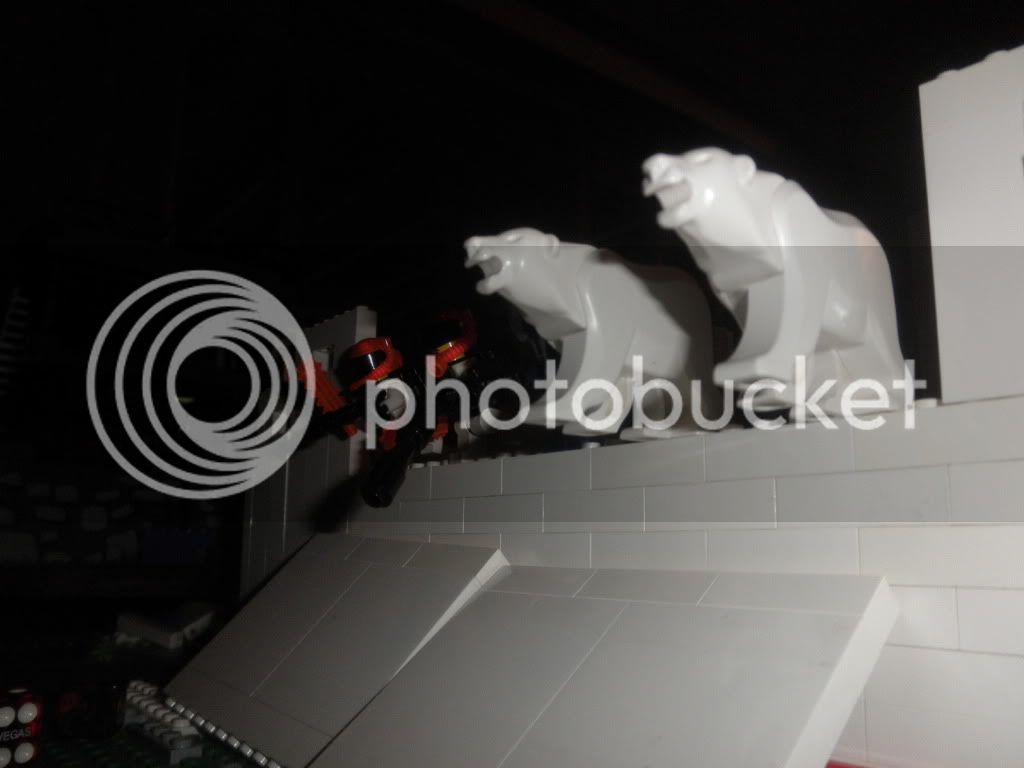 Remaing akkadian civies
Big useless thing takes a final shot before being burnt to a crisp.

It kills the last Assyrian guy.

6 or so Akkadians Surround Morronstudios.

With nobody around to redshirt for him, the end result is pretty inevitable.

Ross Varn
Ross Fires on Cpl. Vesuvius, but he misses.

Now accepting orders for turn eight! It's probably going to be the last turn that i will have time to make. So make it a good/epic one.
Top

I noticed the slaves

piltogg wrote:6 or so Akkadians Surround Morronstudios.
With nobody around to redshirt for him, the end result is pretty inevitable.

still got a bit more to go. But I'm glad you liked it, and am sorry that your faction did not make it to the end.
Top

I sent orders, didn't I?