The Followers of BoB

From BrikWars
(Redirected from BoB)
Jump to navigation Jump to search

The Followers of BoB are a hidden cult which has suddenly uncovered itself to the universe's eye.

As their name suggests, they follow the omnipotent god BoB, God of Slaughter, Power, and Ketchup. BoB was first revealed by the Apellius and shortly thereafter BoB spoke to the People of his coming through Warhead, "And it was spoken onto the riotous that HE who cometh shall be named Bobby, the Jobby, and he shall be known unto The People by his rim on a stick and the ketchup dispenser of redness that he shall hold. And the people rejoiced." A number of powerful inhabitants are said to praise the Bob. It has been said of Bob by the Silvadreamer, "BoB is the lord of all men, conqueror of all galaxies and the greatest warrior in the universe."

And the priests of BoB shall be called Bobbies (the wording in the scriptures here is a little vague, it might be that BoB spelled it with one less "b" but an additional "o". He was very clear that they should follow him everywhere.) and they should bounce in rejoicement whenever BoB is near. The only two enemies of BoB are Jimmy and the Tyronians.

It is customary for Bobbies to wear red hedgear and dress to remind every follower of the holy ketchup, and the more devout hides their yellow faces and hands as not to liken to mustard in any way and therefore not attract jimmy and his followers.

It has since become apparent that BoB is the true Messiah of the Dimmies sent to unite them and lead them to war. Dimmies from all across the Brikverse flock to BoB and pledging their total allegiance. A vast army is amassing and it is predicted that shortly mayhem shall ensue. 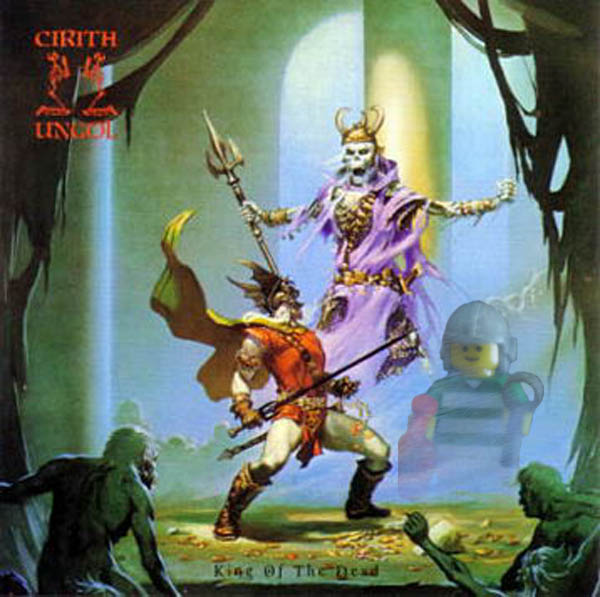 BoB appears in a (slightly out of focus) mystical vision at the edge of a battlefield.
Retrieved from "https://brikwars.com/wiki/index.php?title=The_Followers_of_BoB&oldid=1909"
Category: