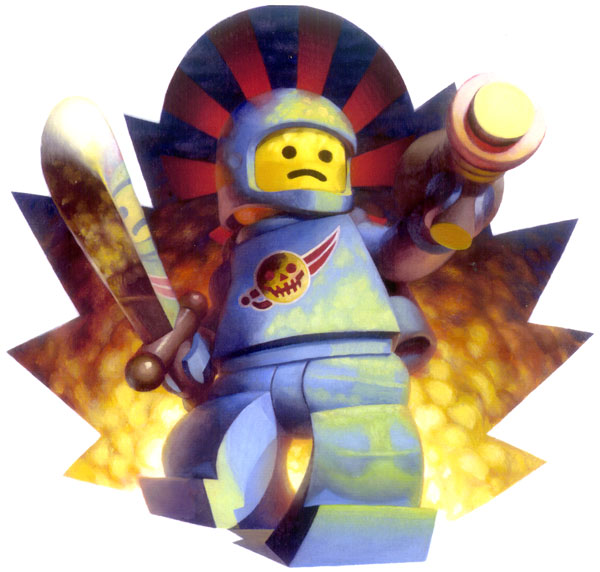 The SpaceMan! Where did he come from, and for what dark purpose was he created? Little is known about the eons preceding the 1,977th Reconstruktion, but the primitive figures surviving from the Time Before SpaceMen seem to indicate the ravaged remains of a civilization on the brink of extinction.

Through chemikal analysis, we have evidence that Ablogical Binding Substance was in use as early as R. 1,963. It is believed that the interdimensional disruptions caused by mishandled ABS utilization may have had mutagenic effects on an earlier species; records of earlier humanoids are difficult to verify but seem to sport a variety of disfiguring mutations, from stunted and limbless homonculi to strange noodle-limbed giants. Theories abound as to whether the earlier civilizations were aware of the effects of uncontrolled ABS, and whether they decided to continue using it anyway, despite bringing about their own near-destruction. However, too little is currently known about these early eras to make any definitive conclusions.

The First Deadly SpaceMan is a legendary, and possibly mythological figure, the Divine son of The Dread Pirate 2x2, thought by some chroniclers to be the first modern Minifig in existence, is renowned for his epic conquest of a billion worlds, and the formation of the Deadly SpaceMan Empire.

While Myths And legends tell of His travels and conquests in the afterlife, including the defeat of the Nega-BloxTrix and the creation of the Heroic Ego. Some legends tell of an epic battle at the end of time, which will destroy the BrikVerse, and in which the Deadly SpaceMan will return to lead His armies in one final glorious bloodbath.

The Deadly SpaceMan Empire is the common name given to the faction which held sway over the BrikVerse prior to the rise of the Tron Empires. The Empire held power for several Rekonstruktions, constantly expanding and re-conquering the various galaxies.

The Deadly Spaceman Empire was by far the most prolific of the elder empires, with almost every other empire able to claim direct lineage to the D.S.E. At the height of the Empire Era, the Deadly SpaceMen controlled trillions of worlds in hundreds of galaxies. Most of these worlds fell silent before or during the empire's collapse, and new, evolved factions are frequently popping into the attention of the universe, most being descendants of the Deadly SpaceMan and the indigenous inhabitants of their homeworlds.

The D.S.E. had a well-regulated military, with different uniforms for different branches:

The different branches each had the capabilities of the the other four, but each had a separate focus, they frequently worked in conjunction.

The following excerpts detail the exploits of an elite unit from the Expeditionary forces, the story was found in the "Warhead" tome amongst various liquor recipes and the names of people's moms next to numeric scores.

The Deadly SpaceMen had an Elite Force called the Azure Guard, amazingly they wore Blue uniforms. As well as expanding the Deadly SpaceMan Empire one of the other duties of these Deadly SpaceMen was to protect the order and stability in the Civilized Systems. these tasks were given to the freshest of recruits as a part of their training. One small contingent of this force was led by a young nobleman by the name of Lrdofbriks. This is his story.

After the latest and most bold of raids on the local shipping reached the ears of Central Command it was decided that Piracy in the Cromerty System must be eradicated. However, these Pirates had amassed enough wealth to arm and crew a small fleet and were presently well entrenched in a fortified base in the Cerberus Straits, a wide band of asteroids that intersected the main shipping lanes. These Pirates were too strong for the regional governors to tackle head on with the limited resources they had ready. The Azure Guard were contacted and a team dispatched.

Unfortunately, the Pirates had a vast network of informants and so news of this mission reached them. Even so, the Azure Guard, even a small contingent like this were not to be taken lightly. Plans were laid and an ambush set to greet them on arrival.

This treachery was to be expected and had been planed for in turn. The Azure Guard in a lightning strike made their landing from a stealth ship in boarding torpedoes. Before the now de-cloaked ship was destroyed the torpedoes had already breached the base's hull. The Azure Guard stormed aboard, sowing death and confusion amongst the Pirate crew as they went. A fierce battle was fought but despite the ferocity of the Pirates they could not match the Elite Deadly SpaceMen. Eventually they cornered the Pirate Leader in his command bridge. A heroic battle ensued between the hulking brute and the young lrdofbriks that left the young noble terribly wounded but victorious. When the base was taken the remaining ships in the system fled rather than lend aid to their fellows, the Pirate band had been broken.

However, the victory was to be short lived for on that base a stolen artifact lay dormant until now. Called from his slumber by the souls of the dead and dying an ancient curse stirred and Zombie Lincoln awoke.

The Azure Guard were beset with re-animated corpses of the Pirates they had only recently slain, they tried to co-ordinate a defensive fall back to the life pods but at every turn they were hunted. One by one the Deadly SpaceMen fell only to be re-animated by the cursed necromancy of Zombie Lincoln. Desperately the Guard battled, their loyalty to their commander driving them to even greater acts of heroism. Lrdofbriks despite his wounds had tried to stay with his men but his wounds proved too much. Seeing their commander fall the Deadly SpaceMen fought their way through to the Life Pods giving their lives for him. They had just enough time to strap Lrdofbriks into the medi-comp and send it into space before they were overrun.

Leaving the base of the dead behind the Life Pod cruised through the system headed for the main planet of Cromerty I. Lrdofbriks wounds were stabilized and in some cases mended before the journey was over but he vowed his revenge for the loss of his men and secretly held himself responsible for their demise. (Hence the tear tattoo on his face). He swore he would not rest until they had been given the honorable rest they so richly deserved and the Necromancer controlling them was destroyed.

On his arrival in system Lrdofbriks was to be met with an even greater shock. A raiding force of The Immortals sensing the systems temporary weakness had taken the opportunity to raid the planet. Lrdofbriks' life pod was detected and captured by an Immortal Cruiser. When later found to be a Deadly SpaceMan he was given the opportunity to serve them, or die. The young man saw his only opportunity to avenge his men and atone for his guilt. He serves them still but his quest for vengeance has never been forgotten.

Clones of the First Deadly SpaceMan 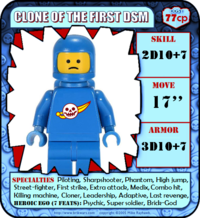 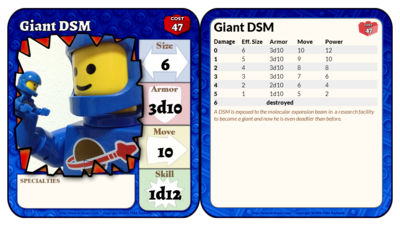 Many civilizations across the universe throughout the history tried to recreate the first deadly spaceman by means of teknology and magik because it is thought that the first DSM is the ultimate warrior that once conquered the brikverse. No one could accomplish to create a perfect clone of the first DSM because of his actual powers were both holy and mystical. There are also known abnormal copies of DSM like giant ones.