"The bank that rules the galaxy." 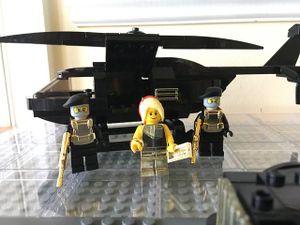 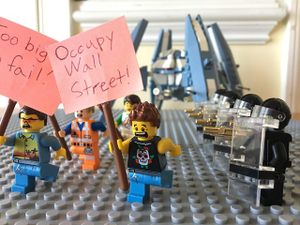 The Goldman Sucks Group is a multinational financial company, and is the largest investment bank in the Nehellenium Galaxy and its satellites. Catering primarily to institutional clients like large corporations and countries, the firm provides investment banking, asset management, securities (stock market and other instruments), and mergers & acquisitions, and other financial services. Although most galactic banks prefer market stability, Goldman Sucks is known for its ruthless crusade for profit and its embrace of khaos and catastrophe, engineering entire galactic financial crises and wars if they can make a quick buck off of it.

Founded hundreds of G.R.'s ago, Goldman Sucks has an illustrious history with many executives moving on to lead the BrikVerse’s financial sectors, including the USA Secretary of the Treasury, the Trattorian Chief Comptroller, and the Governor of the Bank of Britannia, a trend that earned it its nickname of "the bank that rules the galaxy". An internal cult-like culture of loyalty to the firm and secrecy prevails, with an emphasis on absolute meritocracy - the firm employs minifigs from across the galaxy, turning a blind eye to their origins or eccentricities so long as they make money for the firm. Although a public corporation, the firm is still led by a group of about 300 meritocratically-selected Partners, the financial nobility of the galaxy. Below them toil the analysts, associates, vice presidents, and managing directors, who progressively get paid more and work less as they climb up the ranks. The firm has received much criticism for its employee compensation, in particular the extraordinary billion dollar base salary that the Partners receive (excluding the potentially tens of billions of bonuses and stock options they often receive). See Goldman Sucks Characters for more information on the firm's people.

Average minifigs across the galaxy primarily know Goldman Sucks as one of the most evil corporations in the BrikVerse. They deny loans, pillage savings and pensions, bankrupt entire countries with sovereign debt, and crack open companies like financial pirates. It also works with dictatorial, minifig-rights-violating regimes, fixes commodity prices, and engages in regular insider trading with a corrupt culture that rivals the Space Mafia and the recklessness of a casino. Many of the non-Trattorian bankers in the New York and New London offices also regularly hold stripper and cocaine/RbT parties. It even fields its own private army, euphemistically called the Collateral Recovery Instruments. The CRI troops provide internal security, asset protection, forceful debt collection, corporate raids and wetwork, and even the overthrow of uncooperative or defaulting governments.

Using the arcane power of math, the firm concocted incredibly complex financial products that nobody understands, such as Army-Backed Securities and Battle-Default Swaps. These allow the firm to foment and profit off of other empires' conquests and gamble on the results of battles, and were a major factor that caused the 2004 BrikVerse Financial Krisis. Although it successfully beat the Krisis and managed to continue making money through the period, GS successfully lobbied and raided governments ranging from the USA, Trattoria, and Britannia for bailout money anyway. Afterwards, it gave out trillions in bonuses to its top executives using that taxpayer money, resulting in some of its top officials making more than some entire small star empires. To this day it regularly lobbies legislatures across the galaxy to repeal financial regulations and for further favorable treatment. Although not technically sovereign, practically speaking Goldman Sucks' power is such that it can not be controlled by or answers to any galactic government, even its country of incorporation Trattoria.

The firm's de jure headquarters are on planet Trattoria for historical, regulatory and tax purposes. However, operationally most senior executives and operations are in the de facto headquarters on planet New York, which also serves as the regional office for the Northern Spirals. The firm also has regional offices on planets New London (the Shire), Austere (Outer Core), Scythia (Inner Core), Venice (Pan-Germania & Eastern Fringe), Nowa Warszawa (Western Arms), and Praetoria Prime (Extragalactic).