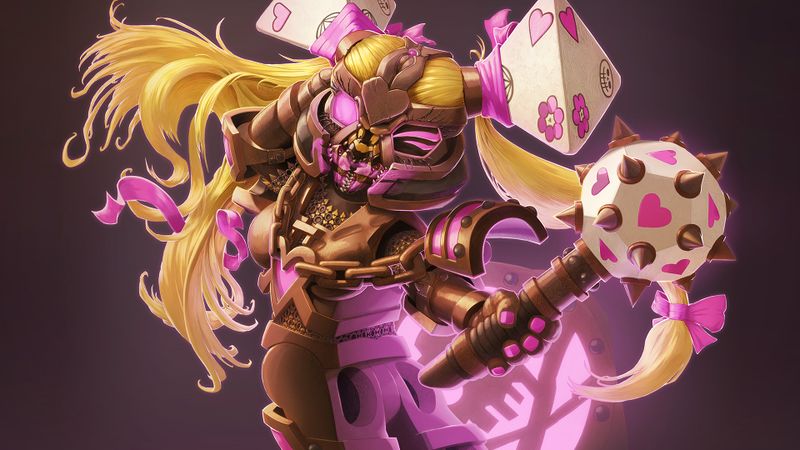 First seen publicly in R. 2,005, the Nefarious Nega-Bloktrix is the Deadly Spaceman's antithetical enemy. She is a seductive rival that supports CLOan factories.

She rules the NegaVerse with an ABS fist, writing and enacting many laws. Notable laws include execution for any who joke about putting lipstick on a NegaBlokian Minifig and public service for any who try to advance science far enough to make briks stay together for more than five minutes.

The Nega-BlokTrix took control of the NegaVerse sometime before R. 1,991. The ancient runes deciphered from wandering asteroids speak of a great invasion of huge licensed robots and large POOP Dragons. After taking the dimension by force and settling all other disputes, she took it upon herself to invade the purer BrikVerse and assert the domination of her world as the best of the worst.

She commandeered a legion of mystiks and was able to open a portal to the LEG-Ore dimension. She and her forces were manifested in the holy halls of the Dread pirate Two-by-Two. The Deadly SpaceMan led the righteous minifigs. When the war had settled, the Deadly Spaceman's forces proved victorious. The evil Nega-BlokTrix and her anatomically disproportionate minions were cast back into the NegaVerse.

The Nega-BlokTrix however, was not content to merely accept her fate, and in an arch-villain cliche, she swore that she would have revenge on the dread pirate Two-by Two, even if it was the last thing she did. And so, with a new life purpose, she created the Nega-Blokia, a defensible CLOan manufacturing wasteland filled with towering mountains shrouded in the smoke from miles of factories. The Capitol sits in a lava pool at the foot of twin volcanoes, from whose chaotic magma all POOP dragons and NegaBlokian minifigs are formed.

Currently she uses the lava harvested from the volcanoes to mold an army of abominations, in hopes that she will one day rise up again and finally overthrow the Deadly Spaceman. The magma is channeled into crude industrial sphincters and quickly POOPed into any shape. The downside of this teknology is that such briks are stuck in shape and often only have one purpose or use. This priority of speed over quality has earned her the title of Official Mascot for QuikWars, BrikWars's faster, simpler alternative.

If the Nega-BlokTrix's only power were the speed at which she can POOP out abominations, she would hardly be any more dangerous than her competitors from any of the other CLOan dimensions. But her skill in gaining Negabolikal license over the souls of powerful warriors, whether through trickery or force, leaves other CLOan forces in the dust. Once their souls are in her power, she is able to rapidly push out endless POOPlicate versions of them through the sphincters of Nega-Blokia.

She currently takes license over the souls of the brave HELO SpaceKnights, including their pretty-coolest guy, Thespian-771, and of all of the armies of the World of OrcRift. Rumors were going around that she had briefly acquired the soul of the Dread pirate captain Jacques Swallow and his crew, but she lost them back to the Deadly SpaceMan in game of full-contact Go-fish.