From BrikWars
(Redirected from Peaches)
Jump to navigation Jump to search

The peach mutations are a separate sub-species of standard yellow minifigs that are a known and present threat in Galactik Civilization. Various theories exist as to the reason for their existence, but none is confirmed.

Timeline of the Peach Mutations

Most of the events leading to the rise of the peach mutations remain shrouded in mystery, but some facts are known for sure. This will serve as a guide to their history within the Galactik Civilization.

Somewhere around R. 2,003, no one is quite sure when, basketball became the most popular sport in the Galactik Civilization. It was overtaken by an increase in the popularity of football, but for a short time basketball was king. In any case, for some reason the minifigs who played basketball were not yellow like all the others. They were peach or varying shades of tan. At the time no one could quite understand why this was, but most suspect a mutation in the ABS genome. Back then, the mutation wasn't quite stable so they did not all share the same peachy colour, though their descendants all share one shade.

It has been suggested by many that the ABS genome was modified by cross-breeding with NegaVerse denizens though this remains unproven. Scholars debate this theory as breeding in the Galactik Civilization is a complicated affair that would translate badly into a cross-breed.

After the fall in the popularity of basketball, most of the peaches lost work and went into poverty where they starved to death. However, a large number of the lighter skinned peaches managed to organize crime rings, surviving off of bank robberies, money laundering, and other forms of crime. This had the result of stabilizing the peach genome. They are still mutants in the rest of societies eyes, but they are also now a distinct peach race.

Around R. 2,007, the peaches entered the long-lasting space conflicts which had been started in R. 1,999 and managed to take over the entire Rayball Army. Although it is not the largest faction, the Rayballs are very powerful, and this infiltration of their military has given the Peaches a strong foothold in their rise to power.

Although they were once celebrated as professional basketball players, the Peach Mutations today are regarded by the rest of the Galactik Civilization as a blight upon society. They are treated by most factions as an enemy which must be exterminated with the same contempt and fury as that which they direct towards the dark forces of the NegaVerse. Violence against the Peaches has steadily increased in frequency and intensity. Entire star systems ban the Peach mutations from entering their space, and wage genocidal wars against them, such as the infamous Assyrian Peach Extermination campaign. Whether the Peaches will be exterminated or gain a place they can call their own in the Galactik Civilization is still up in the air. 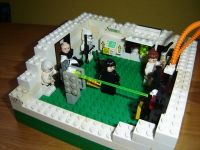 The Peaches have responded by rallying around their own leaders and with the might of their armies such as the United Peach Alliance (or UPA), forming their own space forces under the leadership of great warriors such as RoC77. More recently they have been performing their own, twisted genetic experiments on yellow minifigs. There have been cases when the original smiling faces of yellow minifigs and the smirk of Han Sodo have been seen among the Peach forces. These are no doubt super-soldiers of the Peach forces made from tortured Yellow minifigs.