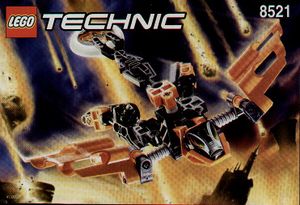 The Slayzers were mysterious robotic beings, who spread destruction across the BrikVerse. Their rampage began in BR 1,999, and continued into BR 2,000. The Slayzers were finally displaced by the mighty Bayounix, and over the years they were largely forgotten.

Each Slayzer was tied to a natural element, such as fire, ice, city, or dinosaurs. They wielded powerful influence over their respective elements. However, the signature Slayzer weapons were their mysterious Discs. Each Slayzer had their own Disc, and a powerful arm for throwing it, spelling doom for anyone or anything hit by the Disc.

One unique Disc, known as the Genesis Disc, was more powerful than any other. This Disc was not owned by any one Slayzer - indeed, they were often seen fighting over it. Some say that the disappearance of the Genesis Disc was what finally stopped the Slayzers, and caused them to disappear as well.

In ancient days, many believed that the BrikVerse was made up of four natural elements: fire, ice, city, and dinosaurs. As science marched on, however, it was discovered that matter in the BrikVerse consisted of ABS. The old tales of elements were disregarded as superstition. However, conspiracy theorists held on to the elemental theory, and pointed to the Slayzers as proof of its veracity.

In BR 2,020, the lost Genesis Disc was unearthed. The shadowy NERD organization used it to bring about the Slayzers' return, igniting the Disc Wars.