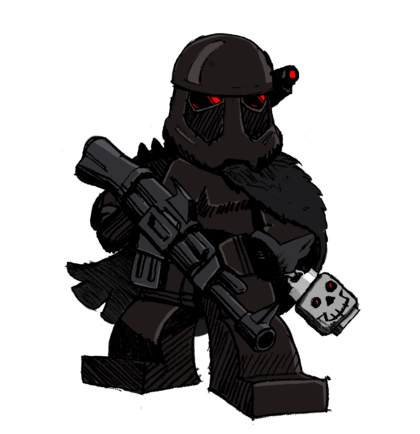 A Marauder of the Black Legion, Military veterans with combat experience who have fallen to the service of Ruinous Powers, These traitors are the backbone of the forces of Ruin . Art credit to Ninja_Bait

The Black Legion is the first warband of the Forces of Ruin operating in the realm of Mir.Known for acts of extreme violence and evil, worship of demented Gods in a sick religion, raiding innocent settlements and engaging in acts of Terrorism by destroying L-Gates and utilizing Banned weaponry to torture and murder minifigs on the plates, Through expansion, intimidation and subjugation they had become a major power and threat to the realm. Their actions since R2018 have ultimately caused the collapse of civilization in the Monolith Realm. While other factions, some even more powerful than the Legion fight amongst themselves, the Black Legion remains as a persistent and ever present threat to all who remain.

The Black Legion has been a cancer to the Monolith Realm as long as most can remember. but it's not exactly clear how a Legion of Ruin came to the plates in the first place. What isn't known to most minifigs is that the Black Legion is actually the first of the Warbands of Ruin, So it's quite difficult to determine an origin point for them if they're the first of their kind, and they've known to always have been around.

The Black Legion is led by the evil warlord Charon, assisted by a collection of lesser edgelords and cronies. Aside from the Warlord very little structure exists within the Legion. There are very few officers or anyone who could be considered leaders. Generally The most powerful Warriors or Mages will assume tactical leadership positions, but in the grand scheme of things The Black Legion is seemingly an unorganized rabble of psychopaths and fiends. Afterall it doesn't take much coordination to set a bunch of freaks loose on a path of wanton destruction