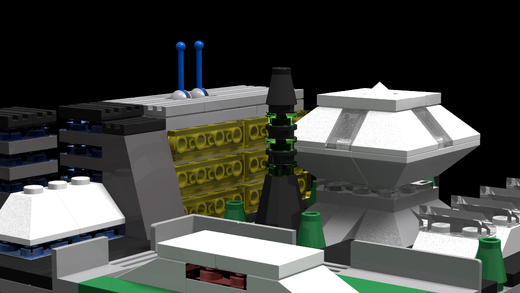 The floating city of Anwar, before it's destruction this floating plate world was considered the Diplomatic and Economic capital of the realm. In a Realm where thanks to advanced Tek, there were few shortages and even death wasn't a concern. Anwar was a place where all factions could meet on neutral ground.

The Anwar Council was once an Empire that's influence spanned the entire Monolith Realm, While now defunct, The tek that they inherited and developed allowed for many of the advances and luxuries that people enjoy to this day in the Realm.

The Elder Council of Anwar was a political body of Elders, Immortal, god like beings created by the Monolith to build the realm. Starting with a scattered but supremely powerful Empire. Over time other races appeared across the realm and the relevance and importance of the Elders began to wane.

The Anwar Council was the final form of organized control by the Elders as a whole. First sharing power with the mortal races, then with the arrival of the Black Legion and other forces of Chaos, they were left to try secure the Realm by themselves when the first alliance of mortals fell. Their actions were in vain as they managed to piss off enough people to cause the uprising and creation of the Armata Alliance, and they were unable to stop the Monolith Imperiya and Stroiteliga Bratva from engaging in a vicious war with one another.

The Council fell from all relevance and power in R2019, First they failed to stop a devastating attack on their City by the Black Legion, leaving it in ruins and the trust of the majority of the mortals shaken to it's core for failing to defend the supposed safe harbour and neutral meeting place... And then they aligned with the Stroiteliga Bratva and Armata Alliance in an attempt to lure and capture Charon, leader of the Legion. Their failure was complete when Charon sprung his own trap, releasing his executioner Kain on them with a dark artifakt. The Council's leaders were killed. And the remainder of the Elders retreated across the realm to set up their own refuges and fiefdoms.