Previously: Episode 6: Permission from the Empire

The Emperor decided that this year imperial new year reception will be held in Nehellium Embassy on Ferstab colony. The usual guests of the reception are the highest members of E.C.O, high ranking imperial army members, bureaucrats, ministers and leaders of vassal states of the empire. To establish friendly relations in Nehellium, some leaders of major factions who are willing to contribute the greater good are also invited to the reception too. 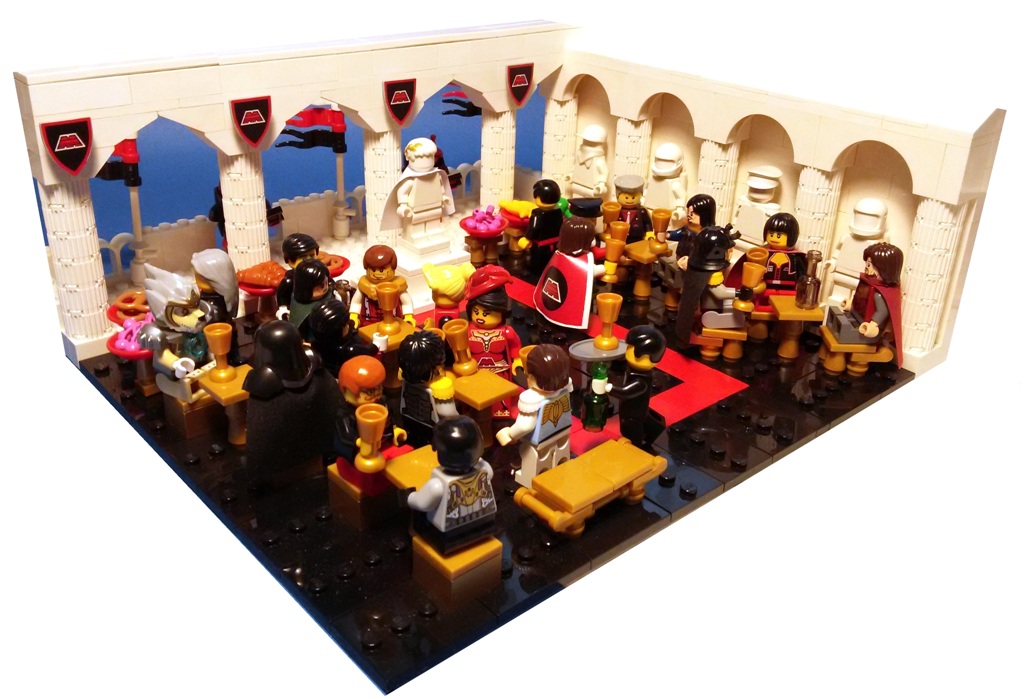 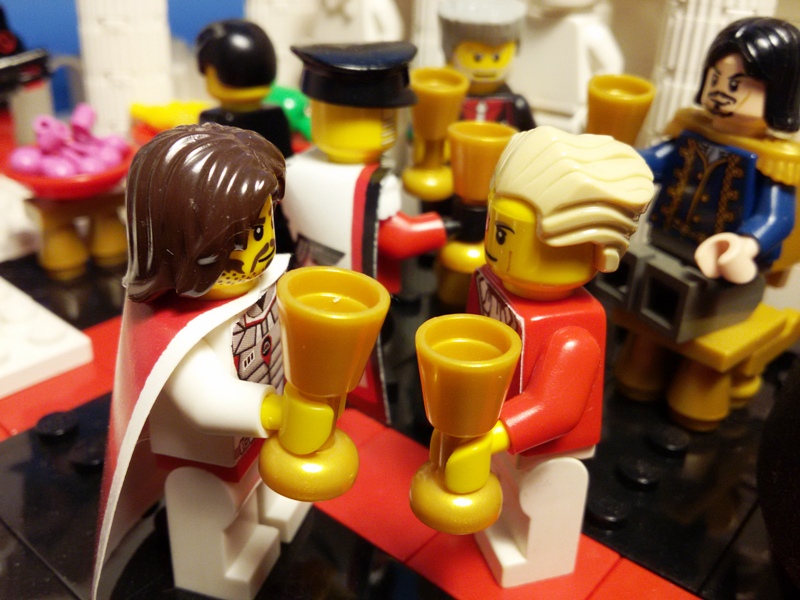 Lord Sigmund Weisswelt: Fredrich, I wish you to go welcome our guest from Nehellium personally.

Lord Fredrich von Gutenburg: As you wish, my lord.

Lord Fredrich went out of the main ceremony hall. Meanwhile the guests are enjoying the reception with various delicious drinks and foods from a large variety of worlds. Timus Stalos, the leader of Steel Stalions (wearing dark red cape), Emperor Yomatomaro of the Yellow Sun and Claudia Luftstadt, head of the Third Eye, are chatting. The statues around the room catch the attention of the Emperor Yomatomaro of the Yellow Sun 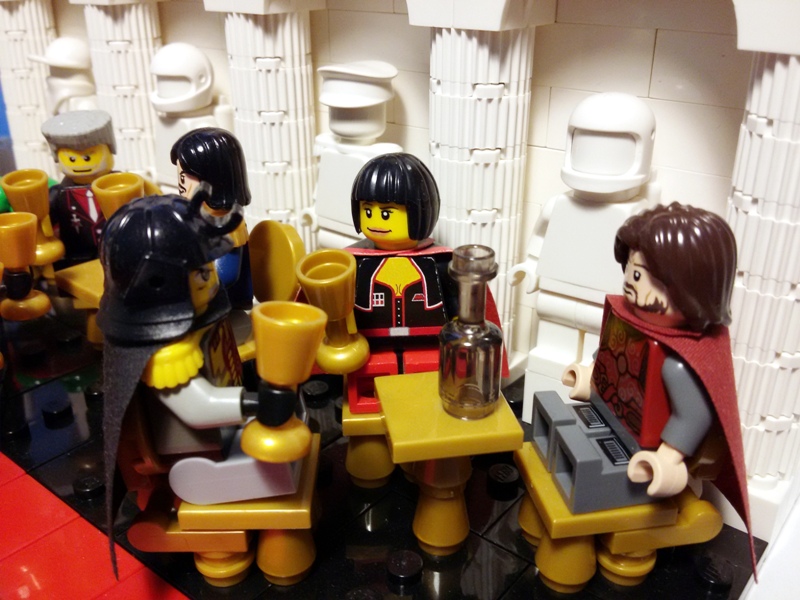 Emperor Yomatomaro: Whose statues are these? Are they ancestors of the Emperor? 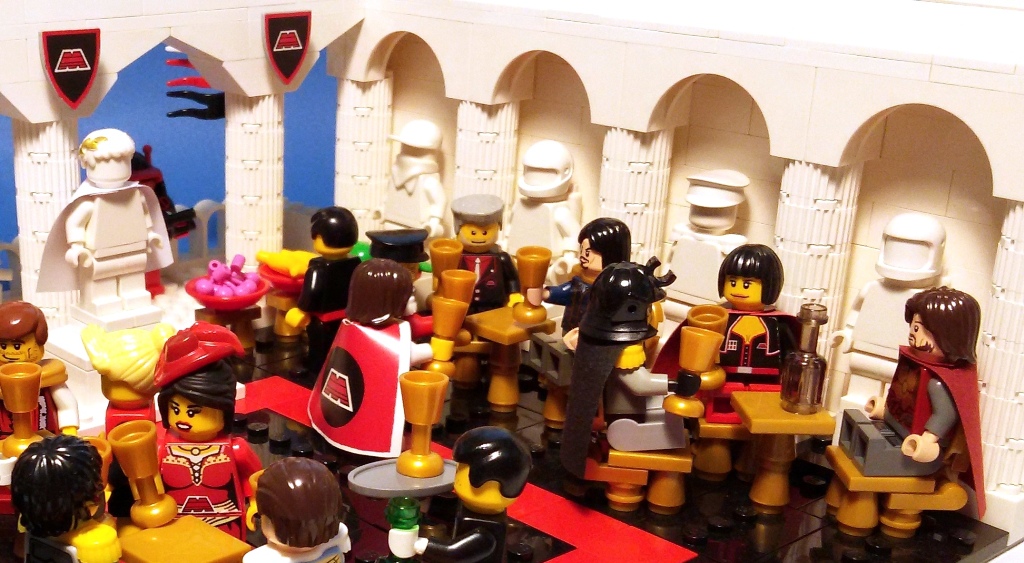 Claudia Luftstadt: No, Emperor Yomatoro. The Emperor has no ancestor. These are statues of the greatest warriors of the brikverse. statues behind me, from left to right: A protestor, a soldier, an officer and a deadly space man. This embassy was designed and decorated as a small version of the imperial palace located in capitol full with statues like these.

Emperor Yomatomaro: What do you mean by saying he has no ancestor. I heard that the Empire was founded thousands of years ago.

Claudia Luftstadt: Yes you are right, your highness but the Emperor has no ancestor. He is the founder of the Empire himself. He has no ancestor because he was born as a clone.

Emperor Yomatomaro: A clone? Are you serious?

Claudia Luftstadt: Yes. He was a clone himself before he became the ultimate leader and the emperor of Minifig-kind.

Claudia Luftstadt: That is a really long story your highness. Lets talk about it some other time. You know. We have some important issues to talk about your planet right.

Emperor Yomatomaro: Yes. You're right princess. So Lord Stalos, are we aggreed on the deadline?

While they keep talking about important issues. Admiral Marius Kriger representing the Intergalactic Marine Confederation, Gerhard Eisenadler, the head of the high council of the imperial army and Lord Otto von Wankel von Vankelheim, the minister of war, are talking about the latest collaborative military manoeuvre between the Empire and Confederation. 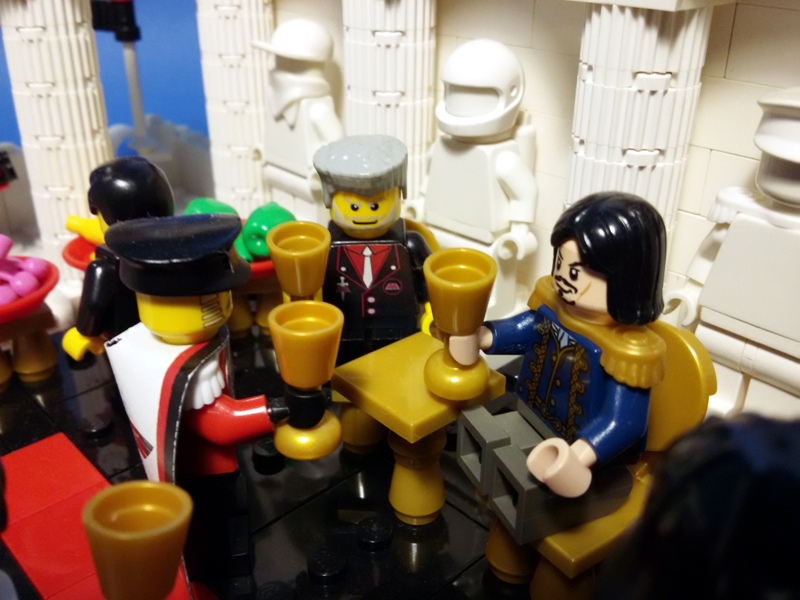 Gerhard Eisenadler: I want to congratulate you, Admiral. I heard your fleet was quite successful on the manoeuvre on Vahamar system.

Admiral Marius Kriger: Thank you, Admiral. Both our fleets were very successful. The collaboration of our forces showed our power to the enemies in the sector and beyond.

Gerhard Eisenadler: Are there still colonies of greens in the sector?

Admiral Marius Kriger: Not a big one we know of but unfortunately small outpost colonies are still present.

Gerhard Eisenadler: As long as they do not involve in an aggressive act they may continue living there.

Admiral Marius Kriger: Yes. I agree but you know that High-lord Toran won't be in peace as long as there are greens in the sector.

Gerhard Eisenadler: I can understand his feelings Admiral. Now that you mentioned it. Why is he not here personally?

Admiral Marius Kriger: He personally sent his apologies to the Emperor. He was really busy with the inspections of the border fleets. High-Lord wants me to ask you about the shipment of the latest purchase of planetary defense guns, Lord Otto.

Lord Otto von Wankel von Vankelheim: They will be ready to ship until the end of the month. Admiral. 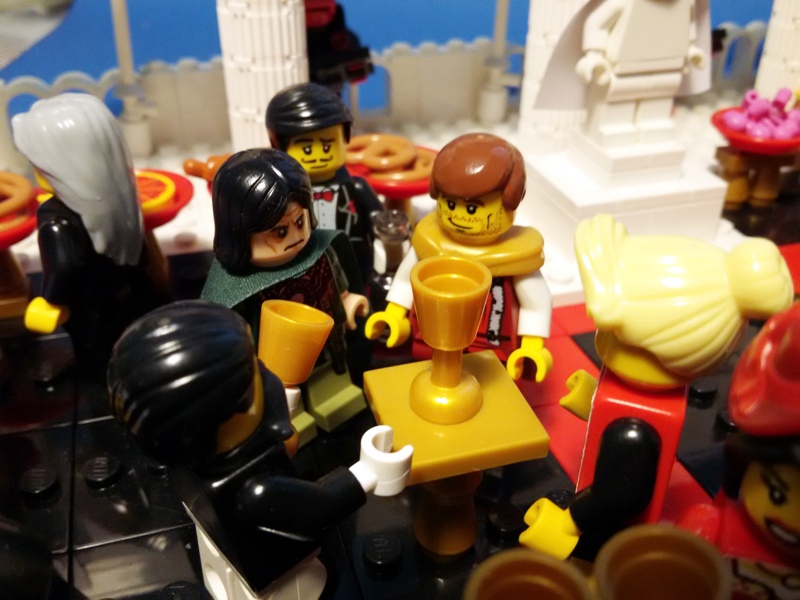 Prince Albert of Lionya: What a beautiful city you have chosen to build the colony, Ms Bright. The planet is covered with unending forrest and a moderate climate.

Lucinda Bright: Thank you, Prince. The surface temperature is nearly the same all around the planets rotation around its sun maintaining a suitable place for life to spread. This embassy is planned to be the meeting point for many occasions.

Prince Albert of Lionya: Back in our homeworld It's always hot throughout the year. We have more deserts than forests.

Grand Meister Holan: Don't complain about it Prince Albert. In my homeplanet we can only go to the surface for few months because of the extreme cold.

Victor Ronsian: Since we have the the technology to control the climate we have not such problems in our planets. Maybe you could consider to contact the firms that sells the tech.

Grand Meister Holan: Maybe not Mr.Ronsian. Our beliefs prohibit us to change the order of nature.

Victor Ronsian: Why are you so obsessive about the nature?

Grand Meister Holan: This is our difference between other marine factions Mr Ronsian. We have seperated from the confederation just because they do not respect the balance of the nature as we do. Also I remind your that some of your life extending drugs contains herbs and protozoa produced naturally in our planets.

Victor Ronsian: I see Grand Meister but don't forget that without the technology of he Empire you had no choice other than being a part of the confederation after all.

Grand Meister Holan: You have a point. We appreciate the Empires help and protection.

Meanwhile arund the next table Lord Joan Brennos of White Sector, Princess Celia, granddaughter of the Emperor and Prince Asato, son of Emperor Yamatomaro of Yellow Sun are talking. 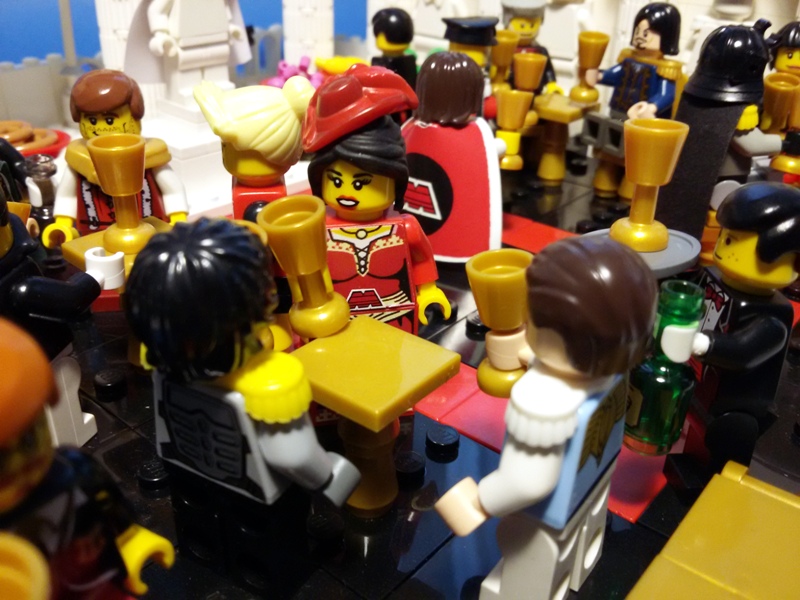 Lord Joan Brennos: So when is the wedding?

Princess Celia: The Emperor allowed the marriage and we cant't wait to be married but. (Prince finished the sentence)

Prince Asato: ..but my father wants my brothers rebellion against him to be ended permanently before our wedding.

Lord Joan Brennos: Hmm. That sounds like a family tragedy. 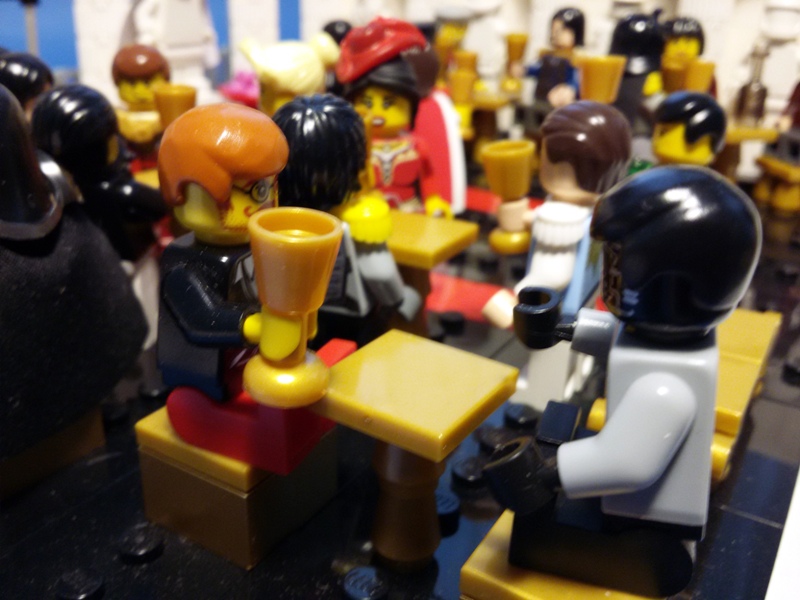 On the next table. Vitrus Anix, ministery of Education and RX302089, representative of syntetics fraternal association talk about the latest educational technologies.

RX302089: Mr Anix, do you still insist using conventional learning techniques in schools? You know we can offer direct teching solutions with brain-implants.

Vitrus Anix: Thank you, Mr. RX. Although the imperial code does not prohibit using your techniques, our government wants to continue with the conventional techniques in education in most of the imperial academies. I can give the contact information of private schools and institutions around the empire that may be willing to use your techs.

Poel Leorax, King of Faunia and Grand Mace Yukon Xamo are talking about the animalian students in the imperial academy. 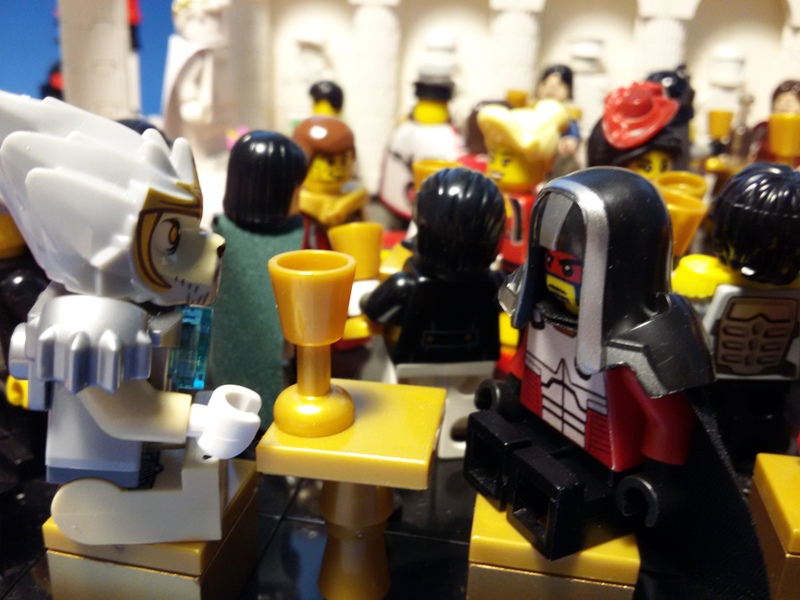 King Poel Leorax: I heard that, no animalian student is accepted to the magician institute in the imperial academy on Nalor?

Grand Mace Yukon Xamo: Imperial academies has very high standards your highness. It looks like animalian students are not good enough to be accepted.

King Poel Leorax: I heard you are the chief of selection comity in Nalor. I hope your religious beliefs do not affect your decisions.

Grand Mace Yukon Zamo: You know there are only few magician institutes in thousands of imperial academies that's because the magic is a very sensitive power to control. Only the worthy and talented students are allowed to learn and use for the greater good. My beliefs are very important for me of course but do not make the mistake thinking that my religion can relate to any action against the greater good.

While people are talking, Igor Manuchef, minister of energy, can't decide which delicacy to taste first while scanning the nutritional values of he food with his bionic right eye. 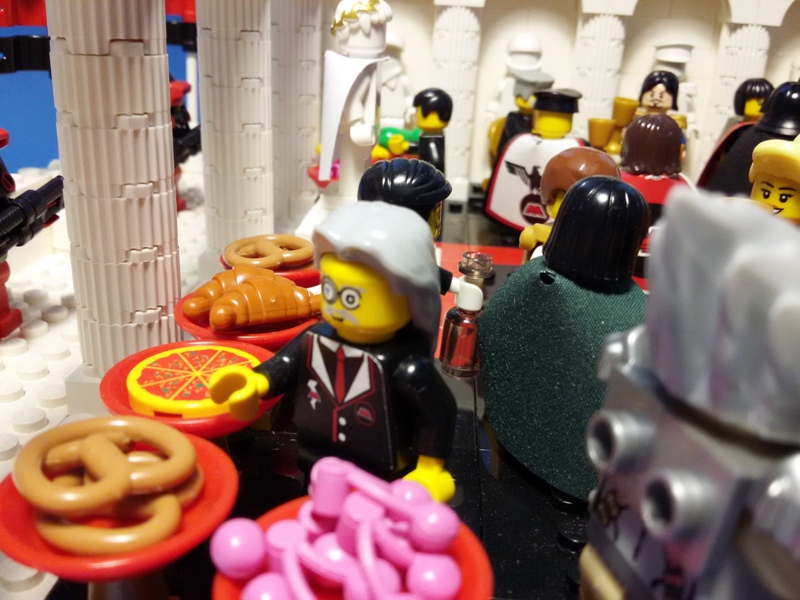