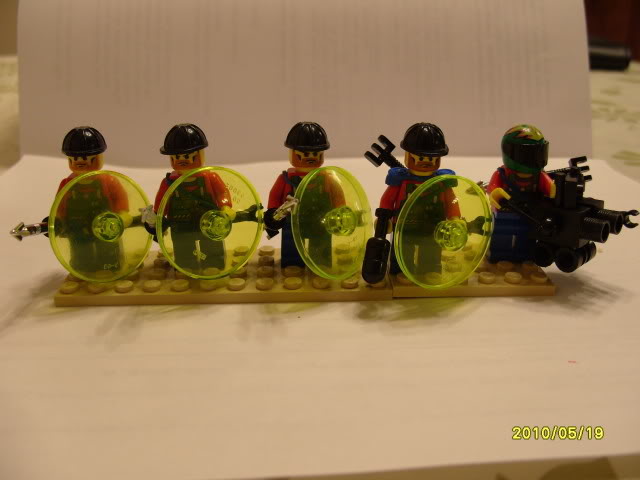 The Gamma Corps is a well-known mercenary force, renowned for it's prowess in planetary defense and hit-and-run strikes. The identities of each member of the Corps are kept confidential, with only the owner of the identity knowing it. Instead of actual names, each member is given a codename. Rank-and-file members are given serial numbers as codenames. However, squads go through boot camp together, so each soldier often acquires a nickname before reaching the lines. Once a member reaches the rank of Colonel, he or she is given a proper Codename, drawn from a bank of submissions.

Historical victories include the Battle of I-75, the Ambush at Gladius Rock, the Cleansing of Ellentius, and the Iceball Massacre.

The Corps has a strange policy regarding quarter and surrender. If the enemy chooses to negotiate before a life has been taken, the Corps will listen. However, once the first Corpsman falls, the Corp's signature battle cry will roll across the field of battle: "No prisoners!"

Battle-cries notwithstanding, there is one situation in which the Corps will take prisoners. If there is only one enemy left, and there is a Mexican Standoff, the enemy will be offered Colloseus, a ritual hand-to-hand battle with dual-wielded knives. If the enemy defeats his Corps opponent without killing him, then he will be spared, given a Scadian Starburst medal, which is a mark of high honor in the Corps, and shipped to the nearest border.

Heroes of the Gamma Corps

History of the Corps

The Fall of Fico.

Although this battle ended with very few Gamma Corps ships limping away from their ruined headquarters/home planet, it is counted among the Gamma Corp's finest moments as the battle was fought against the Immortal Hordes, a previously undefeated galaktic scourge, with the Immortals suffering higher casualties and actually losing personnel, a consequence earlier opponents could not produce. Codename: Aegis was slain by the Immortal General Warhead at the end of the battle.

After the Fall of Fico, the Gamma Corps became scattered and disorganized, with several local generals setting themselves up as local warlords. The direct heir to the command, the head of R&D, is Codename: Saber. His splinter-group wandered space until it landed up in a smallish sector populated by many system-states. The first of these the Corps made contact with was a system called Dehoritus. Dehoritus and its colonies were plagued by space pirates. The Gamma Corps offered protection to the Dehoritans in exchange for a place to live. The Dehoritans accepted, and the Corps drove the pirates out of the system. They so soundly beat the pirates that other system-states were soon asking for Gamma Corps protection, until nearly the entire sector was under the Corps' wing. Now, far from the unhappy system they originated in, the Corps has made a home for itself, defending the sector from external threats such as Serganid brood-pods, Danse Macabre ships, Immortal incursions, and the Galactic Jehovan Jihad.

"The Gamma Corps is a relatively old faction, having existed in one form or another for approximately 9 BRs.

A long, long time ago, in a galaxy far, far away, there was a universe created by the Old God Luc-Az, a dimension known as Shtar Warsh. Shtar Warsh was a diverse universe, which eventually took on aspects of the BrikWars universe, albeit with a mere shade of the true carnage and epicness that can be found in the true Brikverse. As time went by, newer, less grandiose gods would dabble in this universe, in many cases merely altering the lives of the characters Luc-Az gave personality to; however, some of the new gods were bold enough to carve out new niches in the Shtar Warsh mythos, creating new characters, and in some cases, entire new factions. Around what BrikWars-style timekeeping would call BR 2,003, one of the lessermost of the latter grouping of gods breathed life into a small empire in a far-off corner of the Shtar Warsh universe. This nation was known as the Nubians. At first, the Nubians were nothing special, merely a small system-state on the edge of the known galaxy, warring with other Makeshiftian factions for sport and glory.

At this point the Nubians were still subject to the adherents to the religion of Dimmyism, with quite a few of their grander accomplishments achieved through the use of Nize Raynebow-style construction. As the BRs moved on, the Kanon of their little corner of the mythos became more defined. The Nubians were a republic, with civil and internal authority being held by a congress, while military and external authority were held by the Grand Star Admiral. While they possessed a few decent tanks, hoverbikes and even one or two SHIPs, the Nubians were still a very immature and unorganized faction, with no uniforms or standardized armament to speak of and only two squads of infantry. Nevertheless, these infantry composed the Gamma Corps, the Nubian's elite commandos. There were other units, such as the Alpha Corps, who were supposed to be the regular army of the Nubians, but were in fact the smallest branch of their armed forces, and the Beta Corps, who were basically squads of armed civilians each led by a retired officer.

Part 2: The Flight of the Eagles

After a while, the Nubians' home system, termed Nubios by its inhabitants, was invaded by a marauding Space Nomad Empire. While most of the SNE's vehicles and weaponry were stolen from other factions in the Shtar Warsh universe, they still outnumbered and outgunned the defenders, and the Nubians' outer planets were overwhelmed.

Realizing that soon they would be overcome by a wave of lame knock-offs, the Nubians took their remaining fleet and fled deep into the territory of their neighbors, the belligerent Sergians. Realizing that all that awaited them in Sergian territory was enslavement and assimilation, the Nubian fleet, composed of about every spaceworthy vessel available at the time, used an experimental Dimension Ripper mounted aboard the NSS Arsenal to carve a pathway to a different universe so that they could start anew. Unfortunately, the Space Between The Realms is not a pleasant place to be.

Almost the entire armada was lost in the transit. The only vessels to emerge into the BrikWars universe were the NSS Gamma Wave, containing within it the entirety of the Gamma Corps, and the colony ships NSS Clover and NSS Hyzenthlay. Together, these ships successfully terraformed and settled the planet Fico, starting a new age of prosperity for the Gamma Corps.

To support the new colony, the Corps hired itself out to various neighboring star empires as mercenaries, mostly to exterminate Peach infections or help fight off SNEs similar to the one that had driven the Corps out of their home universe. The Corps grew prosperous on these contracts, and their small nation grew, enveloping the planet Fico and soon expanding into neighboring systems. A massive fleet was assembled, allowing the Corps to range even further abroad, hunting down Peaches and destroying Negablox at every opportunity. It was around this time that the burgeoning star-nation became known as the Gamma Corps, as opposed to the New Nubian Republic, which almost everyone except some fat corporate leeches thought was a wussy sounding name. The Dimension Ripper from the Arsenal was used to create a small pocket-universe, from which the Corps could sally into random corners of the Brikverse, and establish stable, chaos-free connections. This infrastructure eventually grew to be called the Network, with each Portal stemming off Hub, the city built in the pocket universe to coordinate the scattered outposts.

Part 4: Enforcers of the Order

As the Corps grew, they found other galactik civilizations were becoming reluctant to hire them on as mercenaries, as oftentimes the Corps' armed forces exceeded the size of their potential customers' entire populations. Desperate for work, the leader of the time, Codename: Gladius took a contract from a mysterious organization known only as The Order. These contracts exclusively involved ranging across the stars, purging particularly strong Negablox incursions from their strongholds. As time went by, the Order came to depend on the Corps for much of their large-scale military contracts, and eventually the Corps ceased taking mercenary work from other star-nations entirely. It was also during this time the the Corps first encountered, and then fought several heated wars with, the Space Celts.

During one of the long wars with the Space Celts, an incident occurred that would shake the Gamma Corps to its core. A fleet came out of warp from far beyond the BrikWars galaxy, and attacked the Corps' homeworld of Fico, shattering the defense fleet and destroying most of the Corps' shipyards and manufacturing ability. Codename: Aegis, the leader of the Corps at the time, was among the fallen.

With the massive losses at Fico, the remaining members of the Corps scattered, eventually coalescing into roughly four units: The Gamma Scion, Operation: Retaliation, the Scarlet Armada, and the GCP.

The Gamma Scion was the most widespread of the Corps splinters, being composed of sleeper agents and refugees scattered across the galaxy to prepare for a similar disaster, such as a massive outbreak of Negablox. The Scion is an amorphous body of milita, irregular units, and rag-tag fleets of commandeered civilian craft. Each Scion cell is lead by a War Missionary, who recruits and trains troops from the local populace. The Scion is currently mustering forces for countering the inevitable Immortal incursion, and although the troops they are amassing are poor quality and underarmed, there's a lot of them, and they're easily replaced. The Scion's main problem is that they are woefully undersupplied, even for a Corps splinter. Individual Scionists can only expect, at best, a Shuriken Carbine, if they get a ranged weapon at all. Of course, individual War Missionaries may have amassed better weapons, but the average Scion cell is typically some particularly disgruntled locals with sharp implements and/or a small shuttle. The Scion also lacks internal stability and organization, with many cells completely unaware of other Gamma Corps factions or even their fellow Scionites.

Operation: Retaliation is made up of much of the surviving Gamma Corps naval forces. Members of Operation: Retaliation, or Retalists as they are often termed, are dead-set on returning to Fico. They are convinced that the Corps only suffered defeat there because A) they were surprised and B) the majority of the fleet was away at the time. Led by Codename: Apogee, whose lover fell in the battle, the Retalists insist on gathering the entire remaining Corps for their counteroffensive, leading to conflict with the other factions, who feel they have better ways to spend their splinter's strength.

The Gamma Corps Protectorate, or GCP, are probably the most established Corps splinter, although they are dangerously overstretched in their chosen role. After the passing of Codename: Aegis, Codename: Saber assumed command of a large portion of those fleeing Fico through the Corps' network of hyperdimensional portals. Using this network, he rerouted the refugees and set them up in the Ollanius sector, one of the Corps' most remote bases. Using what surviving naval elements that would rally to him, Saber has been directing the reformation of the Corps, first by allying with the Dehoritans, and now by attempting to unite the various splinters. The GCP use the portal-network's central hub, a gargantuan space station situated in a pocket dimension, appropriately termed Hub Station, as their base of operations."