The Zolot Sektor, also known as the Gold Sector in galactik standard, was a galactic grouping of some 400 star systems across 4 star clusters that lies between the Western Arms and The Shire , It is largely Dominated by the Galacian Imperiya however the sector is embroiled in a clusterfuck of biblical porportions, a conflict that has been ongoing since the mid R.1990s. As a result, few factions have stood the test of time, but regardless of their allegiance, the minifigs of the Gold Cluster are hands down some of the most capable footsoldiers in the galaxy as a result of perpetual conflict all over the region.

The sector had only ever once been a single unified entity. Due to complications with their initial star colonization the sector actually ended up playing host to multiple factions of independent colonists.. the sector was only whole for a short period after these factions were forcibly unified by the Elkossian Empire. Eventually the Empire dissolved and began fighting amoungst itself in perpetuity.

While the sector is infamous for its infighting with many factions in play. It is nowhere near as divided as it was in the past. Prior to the reunification of R.2014 the entire sector was essentially filled with many independent nations. While they shared a common origin these mini figs had more differences than similarities. Each region of the sector was it's own self contained and self governed nation. Isolation and otherness created this demographic issue only military conquest made any headway in sewing it up

In late R2018, A cataclysmic disaster known as the Monolith Event, erased the entire sector and several surrounding systems from the Galaxy. The inhabitants of the region were presumed to have been obliterated in some kind of black hole, but were later discovered to be reincarnated in an alternate dimension, now known as the Battle Plates, and specifically, in a realm known as the Monolith Battleplates

in R2020 Explorers from the Monolith Realm had passed back into the Dimension of their ancestors, and began limited exploration and recolonization attempts in the vicinity of the Gold Sector. 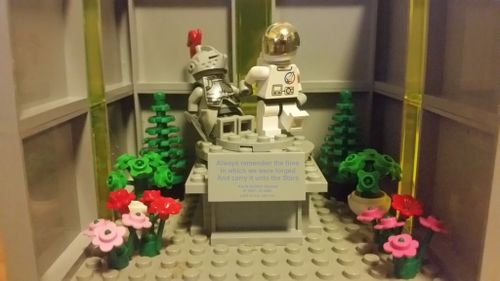 Almost all nations of the Gold Sector share a common Past. The final resting place of Kerjit Aldemir I, one of the last Emperors of the Elkossian Empire and one of the 13 saivors that saved planet Elkoss

The Elkossian Star Empire was the original power of the cluster, but was severley weakened after the result of the Gold Cluster Peach war, Despite winning the war, it collapsed into anarchy as a result of trying handle aftermath and rebuilding, It is survived by several successor states, many of which consider each other competition, and enemies.

The Galacian Imperiya and it's Demokratic predecessor were once considered a rump state of the Elkossian Empire, however in the years since it's reorganization it has surpassed it's ancestor and became one of the most powerful military forces in the entire Galaxy, a development predicted by no one.

Founded by Refugees fleeing the principal conflict zones in the war, Volhinya is considered by some to be the De Jure heir of the Elkossian Empire, however Realists acknowledge that they are militarily and politically insignifigant compared to the Imperiya, to which it is little more than a buffer zone.

Peaches from the USSSR and Galacia, founded the Armata Coalition in what is known as the Balkani cluster, in the northwest quadrant of the sector, They present a dangerous and growing threat to all non-peach minifigs in the sector due to their Supremacist rhetorics..

Once an independent entity Comprised from an Elkossian dissenter exodus in the first days of colonization, the Systems Conglomerate is the only other legitimate state in the cluster. 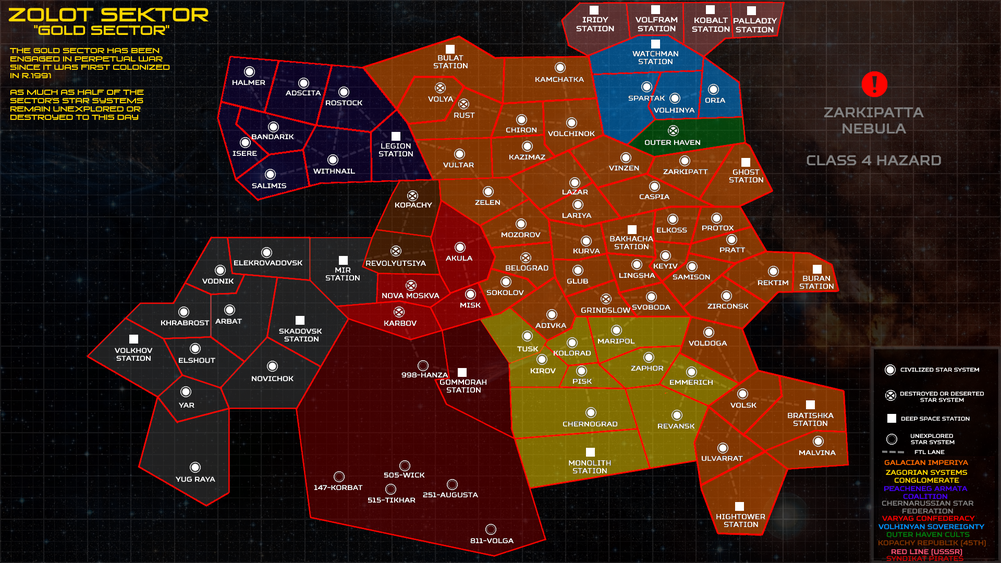 The last starmap of the old Gold Sector before it's destruction in R2018. At the time of the arrival of the Imperiya Novaya and Slavonik Imperiya, any recolonization was to take place far to the west of this zone, All worlds from this map were obliterated during the Resonance Cascade

When the minifigs of Elkoss became spacefaring, they colonized a few systems close to their homeworld, Caspia being the first. However after the first wave they were unable to find habitable worlds in range of their ships, so they began shooting long range arks with minifigs in hypersleep in random directions from the original colonies. The original colonies remained a part of the homeworld's empire, but these Arks, at the time ended up landing on worlds far outside communications range. The arks that survived ended up on their own, and one by one, multiple independent colonies propped up all over the main star cluster, while they shared the same history, they would develop their own cultures, and some even colonized other systems of their own.

Two notable exceptions, that were not apart of the core worlds, nor colonized by the "Seeder Arks" were he Zircon and Vincent systems. These systems had primitive civilizations both in TL5 Stage, they were both eventually assimilated into the old Empire.

By the time that these cultures began to meet each other, they had taken control of what is now known as the Zolotoy Cluster. Some of these cultures got along and traded, others fought, and some were even wiped out. Eventually, the more numerous and advanced core worlds negotiated, acquired, and subjugated all of the lost colonies back into their empire. Just like before, the transition was smoother in some places than others. The most Rebellious being those in the extreme west and south

In R.2011, The entire Zolotoy Cluster with the exception of he territories around the Ulvarattan, Malavinas and Kamchatkan systems were under the control of the Elkossian Empire as it reached it's peak of territorial expansion, compared to present time, many of the colonies were considerably smaller and less developed in R.2011. After the Great Peach war of R.2011/2012, Some colonies were completely exterminated, and most lost contact with one another, left to their own devices again, the more powerful colonies that survived started to do their own thing again while the capital rebuilt.

Typical scene on Elkoss during the post-war period when there was no government.

Per usual, when the Elkoss based capital came knocking the second time, some rejoined, and others rejected, of course this offended the capital, and it eventually led to several "rebel" states that inhabit the cluster today.

In R.2017 three more Clusters were discovered and various powers laid the claim of discovery, general consensus was that these small clusters be added to the Gold Sector

Historically, the ruling power of the sector has traditionally been seated in the Elkoss or Caspian systems most of the time. In the earliest days, after the wave of seeder ships, the sector was divided by several distinct cultures, After the cultures were reunited, the Galacian Republik used a system of Administrative "Prefectures" with many of the colonies in each prefecture having a specialized and focused industry.

By the time of the second Imperiya, these subdivisions were done away with, the core worlds were taken control of by the Emperor and the senate, while most of the other colonies were divided up and handed out to loyal Military generals and their families to rule over as they saw fit with moderate imperial oversight.

The Outer Haven Incident would set in motion a chain of events that would turn the sector on it's head. The Imperial Magikstrate blew a covert operation on Outer Haven, which in turn started a short albeit incredibly destructive war between the then Iron Symphony against the M-Throne Empire and Magikstrate. This was known as the Arhus Crisis. During the Crisis Alex Shulga would Depose Jim Lahey, toppling the Galacian Republik and establishing the Galacian Imperiya

Elsewhere, Volhinya invaded Outer Haven, trying to take advantage of the situation after the Galacian Republik collapsed. Although the superior Volhinyan forces should have wiped the floor with the Cultists, Karl Magadan II, the monarch of Volhinya, was killed by a mortar and the entire Campaign was a failure, Volhinya fell into a Civil War of it's own in the aftermath of the death of the Kynaz

In Late R2018 after the reappearance of Shulga and his compatriots, a third "great war" had broken out in the sector between three alliances known as the Pan-Slavya Coalition, the Maripol Pact and the Crimson Concordat. Prior to this however, Shulga, a powerful psionic, was contacted by a strange "being" known later as the Monolith. The being was a giant , seemingly all powerful crystal that had come into existence after several mad science experiments that tore the very fabric of reality.

Unbeknowst to Shulga, when he touched the crystal, he set in place a chain of events that would for lack of a better word, destroy the entire Gold Sector as the galaxy knew it. The war continued on for some months, but when prophecies of the great Ragnablok came true, the Monolith, who had used Shulga as a link to the Psychic realm. Decided to save itself from the cataclysm of the Ragnablok. By absorbing the entire sector and several neighboring star systems into a sort of black hole.

The material, spiritual and psychic power of billions upon billions of individuals was broken down and rearranged into a new plane of existence where the Monolith would establish itself as a sort of god. The plane took all the energy of hundreds of stars and their planets, and transformed it into a seemingly infinite landmass that expanded forever in all directions, It was unclear whether this realm should be considered a form of brikheaven, or brikhell as it became known as a "Great Battleplate" of perpetual war. Many Clans, Factions, and other groups would fight great campaigns against each other for resources, recruits and artifakts.

The concept of states and nations really didn't apply here, while many of the Gold Sector's former empires found themselves reincarnated, almost every one of them put martial supremacy over everything else. In the Monolyth Battleplate, if you weren't a warrior, you were just waiting to become collateral damage.

In R2020, Scouts from the Imperiya Novaya, led by Cascade survivor Tachenko returned to the sector by way of portals from the Monolith Realm. They began to raid and colonize some of the worlds that had mysteriously appeared in this devoid zone. After some time, another fleet arrived. from the Slavonik Imperiya, it had turned out that Tachenko's group were actually Rebels of this new faction, and were hunting for him for his role in what could only be described ad insane evil by Shulga. Who was recentley defeated

While they had nowhere near the presence of the former Gold Sector nations, multiple factions from the Monolith Realm began to interact with, and sometimes establish bases in the sector, effectively making each of them an interdimensional empire in their own rights.

Star Nations that existed before the time of the Resonance Cascade. All are effectively wiped out as of R2018.

As of R2020, A number of groups from the realm of Novomir had come to repopulate parts of their ancestral home. Although mostly small bases and outposts

Gold sector stellar cartographers normally name a system after it's principal colony. The stars in each colonized systems are Usually named after the colony with a suffix at the end. Such as Caspia-Alpha, The suffixes generally have no meaning or signifigance other than seperating them from the colony itself. Within each cluster. Star systems are usually grouped by constellation or hyperspace lanes into the stellar equivalent of a region or a starfaring nations province. Although many of these are controlled by multiple factions. While they serve no real political purpose, each region is serviced by at least one major starbase. These starbases serve as FTL hubs in and out of the gold sector. Controlling one is to control the means of all starship travel into and out of the sector. Although Ships must follow hyperlanes once in the sector, with the exception of Bakhacha station, which is an anomaly.