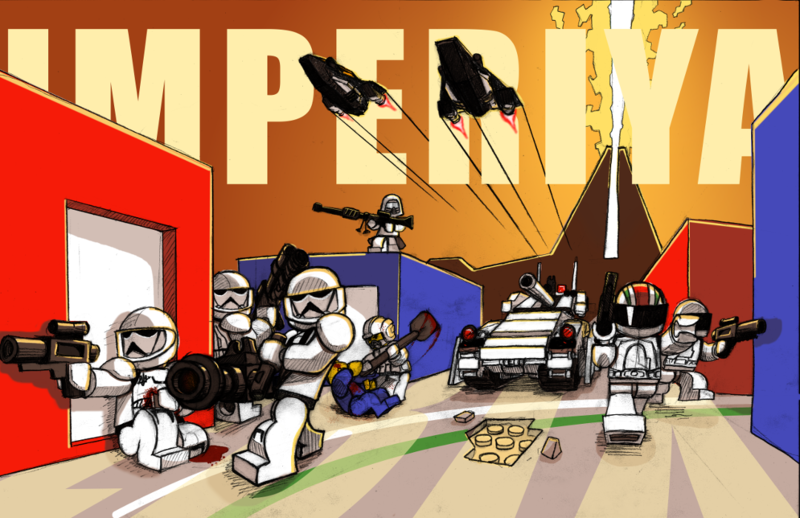 The Monolith Imperiya /Mo-no-lith Im-peer-iya/ (Monolyth Script: Монолитная Империя) is a faction from the Monolith Battleplates and is considered to be the largest and most powerful of the known factions of the realm. Much of their identity was drawn and created from the former Galacian Imperiya, from which it also gets it's name.

The Imperiya is as old as the realm itself, or so old that no one really remembers when, where or how it started. It was believed to be started by a powerful individual with godlike powers, not unlike how the Vorhut had started.

Prior to the events of Ragnablok, The Imperiya had become embroiled in a competition with another entity in the North doing similar things as they, the Bratva, or "Brotherhood" was an organization dedicated to creating a realm that was open and free of Harsh rule. It's entire reason for existence was to spite and contradict the Imperiya. The two groups battled for ages, and their conflict created much of the world the Monolith Realm is known for today

The Monolith Imperiya had traditionally followed the rule of a single "Emperor", for which the Imperiya got it's name. However for reasons unknown, the Imperiya has been without a central leader for a very long time. The very symbolic throne that was sat upon by the emperor, is not only vacant, but outright dissapeared. Yet the mission of the entity remains unchanged. It is generally accepted that Two individuals sit atop of the Empire's leadership. Sergachev and Varone, who more or less hold equal power and issue orders through the help of other commanders and officers in the chain.

The inner workings of the group are largely unknown to the outside world. But many beileve the Imperiya's appearance power is a facade, and that it is a fragile tinderbox ready to start fighting with itself. Many of the troops and officers of the group have formed their own cliques, clubs and subfactions. Many are also defectors or converts from other factions, existing or absorbed. And their loyalties may lie more with their old officers than the Imperiya at large