The Ninja are a totally sweet faction that struck at the BrikVerse from the shadows in BR 1,999, bringing with them a deadly array of exotic weaponry for which they would soon become famed. They came in ceaseless numbers, fading from view here and striking with precision and style there. No one could keep track of them and they slid through the underworld of the BrikVerse as if they were made of shadowstuff themselves. Few enemies were stalwart enough to stand in the face of Ninja osssumness. Only the Pirates have made a steady habit of it, each side locked in an eternal struggle to determine once and for all who is cooler.

Ninja are master assassins and it is in this timeless profession that they find their most ardent calling in the BrikVerse. No target is too great, too powerful, or too removed for the Ninja to find a way to slip a blade into some vital part of him. Equal opportunity killers, the Ninja do not discriminate against targets. No one is beneath or above their notice, as long as the price is right. While they may sound mercenary, Ninja hold themselves to a higher form of honor only they can truly comprehend. Some call them hypocrites and some endeavor to emulate them but the gist is this: never cross a ninja and you won't have to worry about that ninja crossing you.

When Ninja are not engaged in wanton murder or the dealmaking for such a thing, they love their little games of intrigue. Whether against outsiders or each other, only the feeling of the kill accomplished well tops getting one over on someone else. To this end, many Ninja train their minds as well as their bodies and are well known for their most excellent practical jokes.

Ninja are organized into a Clan Heirarchy, with 13 Greater Clans in charge of innumerable Lesser Clans. The Lesser Clans often vie for the attention of the Greater Clans, hoping to be next in line to ascend to that status when a Greater Clan falls from grace. The Greater Clans politic with one another to gain rank and prestige, moving up the ladder and lessening the chances that they will be chosen for a fall into lesserdom.

Players may create one of these clans when creating a new faction. This allows any number of players to have a "Ninja Faction" under the Community Content guidelines.

Ninja employ a wide variety of lethal weaponry. Their tools are almost as much a reason for their fame as they are. Most commonly, a ninja carries a Katana, a wicked ossum weapon also employed by the more noble Samurai, and a handful of shuriken, or throwing stars. So adept are Ninja with these stars, they can toss nearly anything of the same rough size and shape with deadly results. Donuts, for example. Ninja love donuts.

Sometimes, a ninja will employ a blowgun with poisoned darts.

As the Ninja move out into the stars, their schemes become wider reaching, more ambitious, and far more deadly. Their pool of targets grows exponentially. And then there's all that wonderful black emptiness to hide in. Ninja are at home in space. The 13 Greater Clans almost always operate at the Space level. 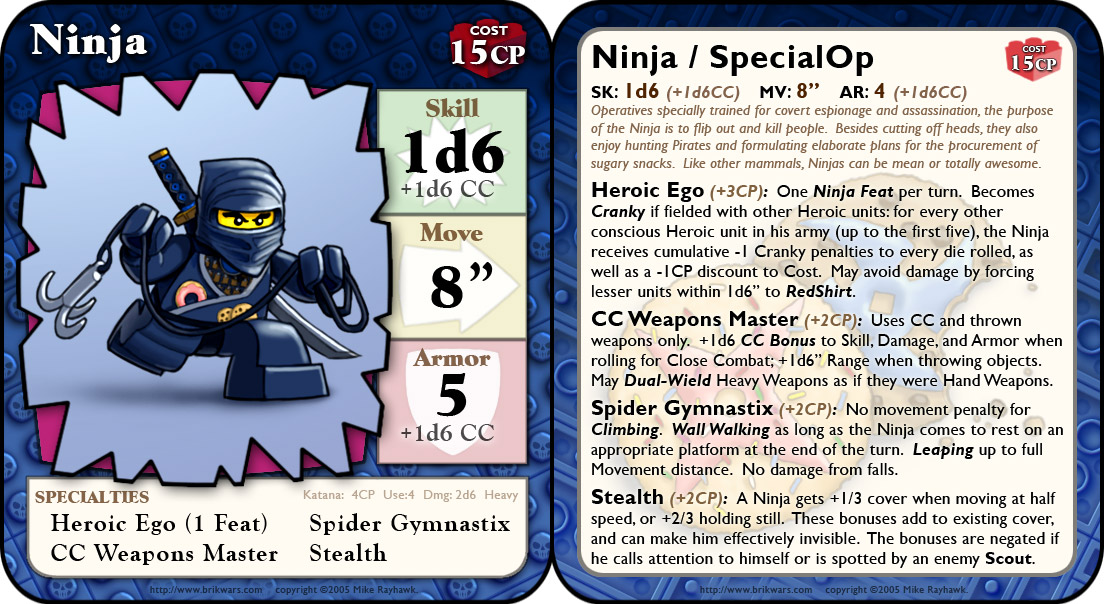 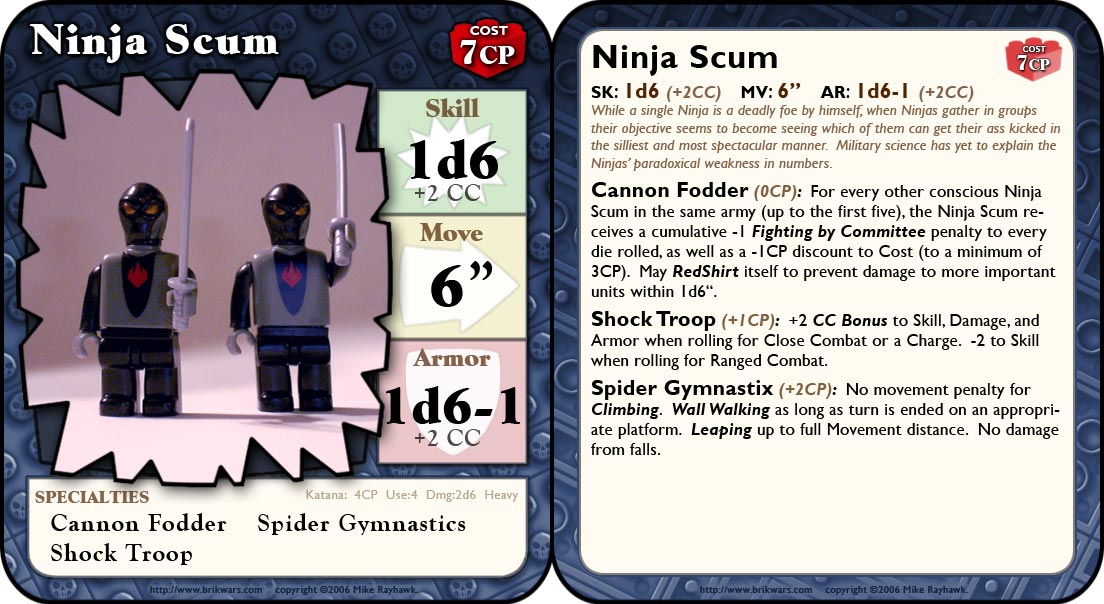