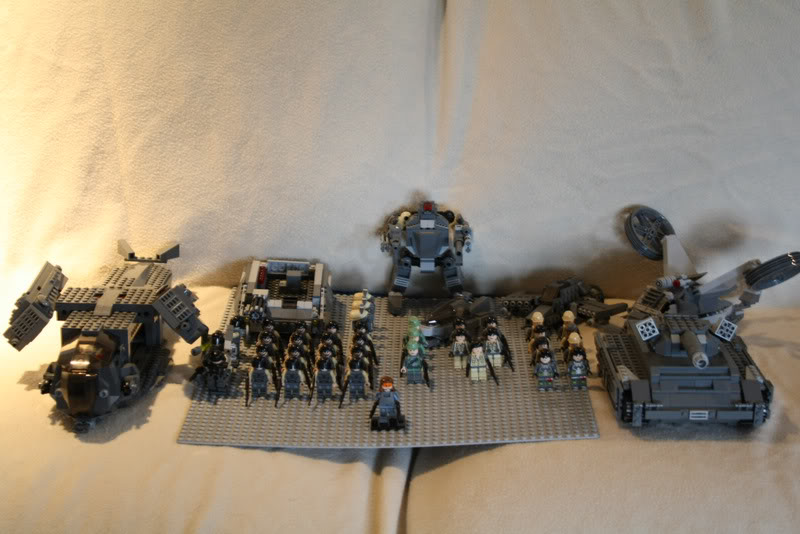 An overview of Paladin Corps forces.

The deadly PLA has invaded the small world of Cain-un, and great advance has downed two major cities already, with no end in sight. now the growing army of Cain-un, the Paladin Core, faces an army much stronger than them. centralized in the third largest city, they hope to regain their home planet.

Recently thrown into the Immortal War, the Paladin Corps soon realized they were severely outmanned and outgunned. They lost battle after battle, losing their foothold in new planets, constantly being pushed back by the relentless Immortals and their allies. Many Shadowguard died, and whole companies were obliterated.

The Board of Military Commanders (what was left of them) decided it was time to pull back and retrain and re-equip their troops, and begin their second push.

Their space division was still growing, and as such their ships were not the best. Still, they had the support of a contractual military alliance with the Scythian Empire, and their newly signed trade agreement with the Avalonians to give them the raw material they needed. They drafted up several new weapon designs and redistributed funds to different branches of the Corps.

The result was a newly designed rifle for the standard infantry, and newly enhanced armor for the entire company. The Shadowguard, now quite sparse, were redesigned as well, as it was decided that keeping them alive was more important than stealth. heavier armor was fitted, and their armor was colored the blue of a commender, to let them stand out in the battle.

A new fighter was also produced, to aid the still-slow starships with space battles. Though not very imposing on their own, they pack quite a punch when in small squads, and are small enough for quite a number to be kept in the hangar bay. Most of the main combat vehicles have stayed the same, some of them have undergone minor changes in technology and some have been renamed.