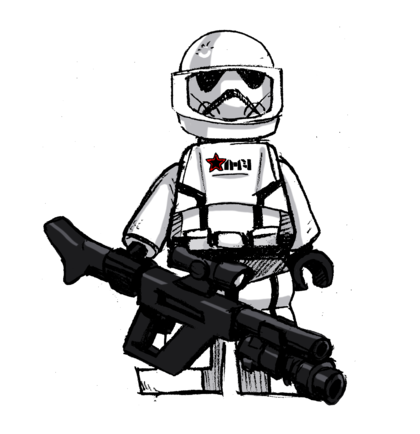 The Slavonik Imperiya /Sla-vonik Im-peer-iya/ (Slavonik Script: Монолитная Империя) is a faction from the realm of Novomir and is considered to be the largest and most powerful of the known factions of the realm. When the realm was created, nefarious powers modelled this new Empire directley after the fallen Galacian Imperiya.

The Origin of the Imperiya has been largely lost and forgotten to time, the Realm of Novomir has changed so radically in recent times that such things are hardly important. What is generally beileved about the Slavonik Imperiya is that it has existed since the initial decline of Elder dominion, possibly starting as a faction of an entity known only as the "First Alliance", The Realm's first attempt at a unified governing body of non-magikal Minifigs. The First Alliance failed due to it's wide range of territory and ineffecient infrastructure, but many former members of it would go on to resettle other areas, and start groups of their own that still survive today. As Magikal-Elder populations retreated due to the "Mortals" steadily outpacing them, it is believed that the early Imperiya steadily grabbed territory and technology from the waning Elders.

Employing the principles of Law, Order and Security in a land that was well known for all sorts of Dangers in the wild, they were able to quickly gather the necessary support in order to take on large projects. Imperial cities dotted the central plate worlds of Novomir and they quickly became the realm's de facto center of Minifig activity. Their control over the affairs of so many residents directley led to the creation of a number of sepratist, dissident or otherwise rival groups across Novomir. Some would try to carve out an alternative to Imperial Life whereas others would actively fight them. The Stroiteliga Bratva "Builder's League" was the largest of these groups, The Imperiya would fight a number of skirmishes against the League for years while a dwindling number of Elders, calling themselves the Council of Anwar tried to maintain Realm peace in a diplomatic alliance of sorts with most of the factions of the Realm. When it all came crumbling down, there was little to stop groups from fighting each other again.

However shortly after the fall of Anwar, it became known to many of the leaders of the realm that a powerful and nefarious entity was lurking in the shadows, a sentient crystal known only as the Monolith was influencing Minifigs into committing acts of great damage and destruction. And furthermore the Monolith was making the very fabric of reality unstable. A temporary Alliance was struck between the Imperiya, League, and most of the major players of Novomir. Having committed the most resources to the war against the Monolith, the Imperiya was left holding most of the cards when the powers came to discuss the aftermath of their war.

Mediated by Kast, the Aftermath of the Monolith War would see the Imperiya inherit the remains of the crystal. It would be used to open up a number of interdimensional portals to other parts of the Brikverse. Furthermore, the remaining power in the crystal was to be used for the good of the realm itself. Namely to ensure that for better or for worse, Novomir's existence would be kept afloat. Given their already established power over the realm and being the center for most minifig life in the realm, it was agreed that the Imperiya should have control of the Crystal, but distinctly not under the control of a Military figure but a Civilian one, who would be more "neutral" And thus the Imperiya would adopt a dual leadership system. An "Emperor" who would use the powers of the crystal to protect Novomir from the paranormal and cosmic entities of the fabric of Reality, and a Military leader who would protect the Realm from it's more physical outlets, like Minifigs and Monsters.

In mid R2020. With no ceremony or explanation, the dwindling Elder population left Novomir in a mass exodus. This left the entire realm in crisis as most civilizations had built themselves around the luxuries and tek advancements provided by the Magikal Elders. The most important device was the Elder Forge. A machine that when powered by one or more cannisters of liquefied crystals called Ichor, could produce almost any kind of part or complex component. Such machines were used for creating everything from the very building blocks of structures, all the way to armored components for tanks, assembled guns, personal armor and hi-tek devices. The forges themselves as with most Elder tek was created with an ultra rare golden material that non-elders had no idea how to work with. In essence the knowledge of creating and maintaining these forges was lost with the Elders when they left, only a couple thousand still existed in the realm. Further adding to the problems was that the crystals they used for fuel, were rather rare themselves.

In a move of jaw dropping stupidity, The then Emperor at the time, with little understanding on how to handle Elder-Tier Magik, attempted to use the power of the Monolith to artificially duplicate vast reserves of Ichor. The process backfired spectacularly, Ichor fields across the realm experienced an unprecedented explosion of growth, fields expanded a hundredfold. Completely overtaking many plate worlds and rendering then uninhabitable, the material properties of Ichor were hazardous to unprotected minifigs, and it accidentally killed a lot of minifigs. The then Emperor at the time, his name forever stricken from records in disgrace, had also managed to blow himself up in the process, and greatly diminished the power of the Monolith crystal. This incident would usher in the era known as the Ichor Wars, (R2020-Present).

During the crisis of the Black Crusade, the Imperiya's ability to respond was hamstrung by an internal conflict that resulted in several of it's subfactions openly fighting each other. Some say this was orchestrated by nefarious agents with sympathies to the Black Legion, as despite being rivals a combined Imperial/League effort would have quickly halted the Legion in it's tracks. However it was not meant to be, and the Stroiteliga Bratva was ultimately abandoned to it's fate.

Having existed since time immemorial in the realm of Novomir, the overall goal of the Slavonik Imperiya has understandably changed over time, based on the world around it.

Since R2020, With the opening of inter dimensional portals, the departure of the Elders, and the vastly deteriorating state of the realm due to Ichor contamination, the Slavonik Imperiya has officially assumed the mantle of the central government of the plate worlds of Novomir. While they control only about 20% of the still habitable realm, they control the most important 20%. Millions of minifigs inhabit Imperial protected lands.

In the past, the Imperiya had been seen by both outsiders and citizens alike as a morally corrupt entity. But with the state of the Realm, even their harshest critics must acknowledge what they are trying to accomplish. The Imperiya seeks to defend and protect the habitable territory that remains, slow the spread of Ichor contamination, provide for it's citizens, and most recently they have made attempts to colonize other worlds outside of their own realm. Notably exploring the area known as the Gold Sector in the Galaxia Nehellenium. A series of star systems that if Legends are to be beileved, were the origin from which their plate world realm was created.

One mission of the Imperiya that has caused them to butt heads with it's own citizens as well as others however, has been the subject of Magik. Eversince the incident that spawned the Ichor crisis, the Imperiya has outright banned almost all forms of Magik across the realm. Anything other than low level magik is often punishable by incarceration or sometimes even death. Magikal artifacts from the Elder era are treated as weapons of mass destruction, and entire Agencies are established to hunt down and safeguard Magik staffs and other artifakts.

Even after all of this, for better or for worse. The Slavonik Imperiya still maintains it's original mission, To uphold Law the law, establish Order, and provide Security for it's citizens. 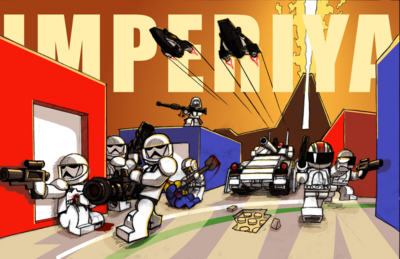 The Imperiya is known to pay artists vast sums of credits in order to do up fancy propaganda pieces in an attempt to impress and awe minifigs into joining their ranks. Artwork by Ninja_Bait

The Slavonik Imperiya considers itself to be the ruling Civil Government and Military power of the realm of Novomir, and thus despite not having complete control over all territories, it's leaders share an interest in the stability of the realm at large.

A secretive council of politicians, military leaders and psychics will periodically select an individual to take up the responsibility and title of that of Emperor. An individual of notable prowess in controlling Magikal artifakts will be selected for the role for a finite period.While this position's power is considered absolute, the majority of their time in power is spent using the Magikal throne to build or repair plate worlds across the realm. Their responsibility is as much to the land as it is the people, to ensure that the realm has a future regardless of who lives on it. Ever since one particular Emperor misused the throne and caused the Ichor Crisis, the council that selects the Emperor has made sure to keep anyone they pick in check once they take power

On the other hand, the actual territories controlled by the Imperiya are ruled by a feudal caste of regional lords. Each commanding large armies and various industries and assets. Unlike a traditional feudal kingdom however, there is a high degree of standardization and uniformity. In short, These Lords are little more than Regional governors who are not elected, and power is only transferred when one dies or willingly gives it up

While the territory of the Imperiya is mostly static, small areas are occasionally added to the collective territory once they have become modernized and civilized enough. Generally this will happen one of two ways, either by Imperiya development in sparsely populated or empty areas. Or Much smaller local groups being offered an olive branch to join the Empire and reap collective benefits. In the case of the latter, Many of these local authorities will accept the offer and gradually assimilate into the larger entity. Until then they will maintain a moderate degree of autonomy. Militarily it is not unusual for these Autonomous zones to be fielding their own troops that are supplied with Imperiya military hardware. Unfortunately these smaller groups have been known to drag their allies into conflicts, as well as even start fighting amongst each other from time to time

The Slavonik Imperiya trains a large and complex military force with a number of branches. Utilizing Volunteer Auxiliaries, Conscripts, and Professional contract soldiers. They also maintain a large and varied Motor pool and fleet

Small Aerocraft Smaller craft that are suitable for operations in both the Plate World Realm of Novomir, as well as other worlds.

Due to the nature of the realm of Novomir, fleet ships are largely impractical for use there. The larger ships of the Slavonik Navy are generally only used in the dimension of their Gold Sector Holdings

The Slavonik Imperiya is based on an amalgamation of Eastern European nations with a secondary influence being that of feudal Japan. Many influences are also taken from units and designs in video games.