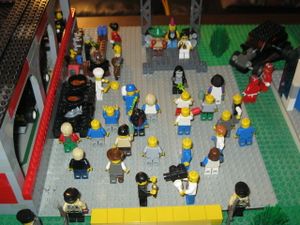 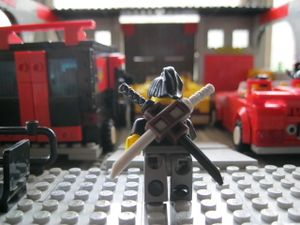 The mummies continue their rampage and kill the boat passengers, among others. The old archaeologist survives multiple attacks by the mummies, earning hero status and revealing himself to be the renowned German archaeologist Dr. HMG.

Officer Jenkins intimidates most of the looters into submission, and the one other remaining police officer begins cuffing them. Manly Fucking Santa drops a jingle bomb on the police and looters, causing chaos. Two looters break into the blue and white house only to be greeted by a rigged shotgun. Kevin McCanister has been accidentally left home alone by the survivalists, and has booby trapped his house.

The Azteks and mummies begin fighting each other.The slaughter on the beach continues, and some civilians begin to fight back with energy swords and tennis balls. The survivalists convince a lifeguard to take a ride on their totally awesome party jeep while stealing Aztek gold.

The guitar player rocks a solo so hard that it literally melts the concert-goers' faces off and causes one person to spontaneously combust. The Dos Briquis guy continues to be awesome by opening bottles with his beard. The Exterminator, a time-travelling cyborg assassin, is discovered after being slapped with a fish.

Major Patriotism demonstrates how the enemies of justice will get shafted by impaling three mummies in a row on his flagpole.

A horde of zombies then shamble onto the battlefield, hungry for brains.

Officer Jenkins radios in for backup. A police helicopter flies in and strafes Santa's sleigh with gunfire before crashing and exploding due to spilled coffee. Jenkins proves that some cops die hard, surviving an explosion and several attacks.

The B.A. Team spring into action, accomplishing feats such as splattering zombies, wounding Officer Jenkins and dropkicking Psy and stealing the mic.

Guy Fox the self proclaimed leader of the anonymous looters, convinces members of the crowd to join in their quest to steal the globe standing by the Dos Briquis guy. The Dos Briquis guy will have none of this, and kills several attackers.

The exterminator rips a civilian in half before locking onto his target: Psy. Psy creates universal gangnam, conscripting audience members to defend him with gangnam style.

The Azteks and mummies continue their slaughter, resulting in the death of several Aztek elites and the Pharaoh Mummhotep, among others. Mummhotep's spirit posesses a statue. The survivalists ask for help from the Mayan god Xaman Ek.

Manly Fucking Santa throws down a rocket launcher to Guy Fox before summoning some killer hos.

After a surfer wipes out and destroys the zen of the dojo, the Master emerges to restore balance to the universe.

The U.S. army arrives to restore order and the Corrupted Spacemen appear to destroy everything.

A radioactive mummy explodes, killing all of the killer hos.

One looter steals the globe and puts it on his head, trying to become a youtube sensation. Guy Fox reveals most of the beer kegs to really be full gunpowder before blowing them and the bar up.

The Corrupted Spacemen start trying to kill everyone and blow up Santa's sleigh.

The Aztek emperor Briktezuma uses blood sacrifice to summon Xaman Ek and Quetzalcoatl. The Azteks also get a mech.