Nestled in the Crags of Lorne, where few minifigs can withstand the chilling temperatures of the Norselands lie the settlements of a desolate faction known as the People of Frostborne. These warriors don’t normally trouble themselves with the other minifig factions below, and have kept to themselves for the few generations that they have lived in their icy homes. They have built their tinier-than-most civilization from the foundation of cold hardship.

Their ancestors were just a small force of barbarians who had been driven from their homes hundreds of years ago by wild beastmen and ork alike, fleeing into the mountains until the monsters turned and abandoned the pursuit, the chill that crept down the mountainside perhaps being too much for them. Life after that wasn't easy for the barbarians. They tried creating an existence for themselves up in the mountains, building a small but hearty settlement now known as Naklin. Many had died during this process, the cold being too much for them. However, they did not all perish, that to this day is very apparent.

Since the darker ages, the tribe had become accustomed to the bitter temperatures and soon their petty village grew larger and their people stronger, in a time they call today “The Rise of Frost”. Since the Rise, the tribe was given another chance. In a sense, they believed they had been gifted by the BrikGods by being “born again from ice and snow”, hence the name “Frostborne.”

Since their descent from the Crags, Jarl Barbous has been amassing a “defensive force” in retaliation to being attacked on the way down by ancient undead warriors. With the successful pilgrimage and small settlement built at the foot of the mountains, the Forstbornians can finally venture into the world below them. They do not come unprepared however, they are equipped with some of the finest steel and fitted to keep the cold at bay, for even the people of Frostborne feel the deepest chills of winter.

Two years had passed since the brave pilgrims of Naklin had descended the Crags of Lorne in search of new land to raise their banners on and discover what the Norselands had to offer. They had settled at the foot of the Crags and established a hearty stockade which they had later named “Pinewood” after the lumber it was erected from and the dense evergreen forest that surrounded them for miles. 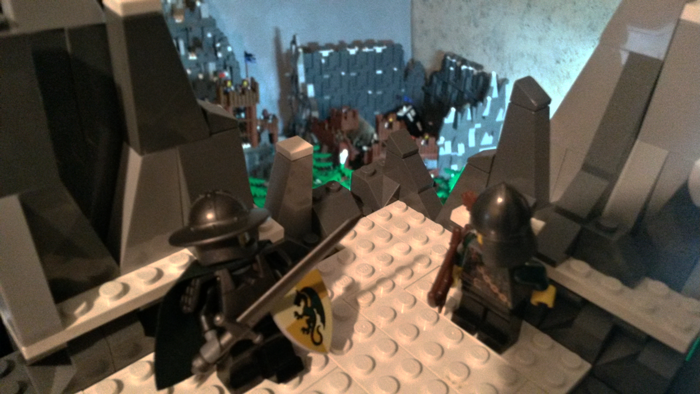 Their activity did not go unnoticed however. Other than mysterious attacks made by the relentless undead, a band of invaders that called themselves the “Draklon Raiders” had attacked Pinewood just as the settlement was in dire need of reinforcements. Though Pinewood was ransacked by wild Norsemen who swept past Draklon like a tide, the rest of the invaders were driven back by the help of a mysterious fellow who called himself "Ken" and his heavy reinforcements.

With the waning of the “skirmish” at the stockade, Frostborne was quick to recover and carefully proceed into the evergreen wilds of the Norselands. Even after the mysterious disappearance of Ken right after the battle (and still no one but Ken understands why), the faction pressed on and eventually befriended a small clan of dwarves just a few miles north along the foot of the Crags. After the negotiations of an alliance with the “Gravelgrinder” dwarves, even some smaller tribes of Norsemen with their own relations to the dwarves had joined sides with the ever-growing Frostbornian people. Soon the term Frostborne “tribe” would be irrelevant all-together.

Now after the successful test run of various new weaponry and the return of the once thought dead Ken, Frostborne’s military might is growing into more and more of a force to be reckoned with. Their next move, under the order of High Jarl Barbous Blokhead, is to extend their borders even farther and crush any opposition with an icy fist. Winter may be coming, but with it comes the mighty ranks of the Frostborne Realm.