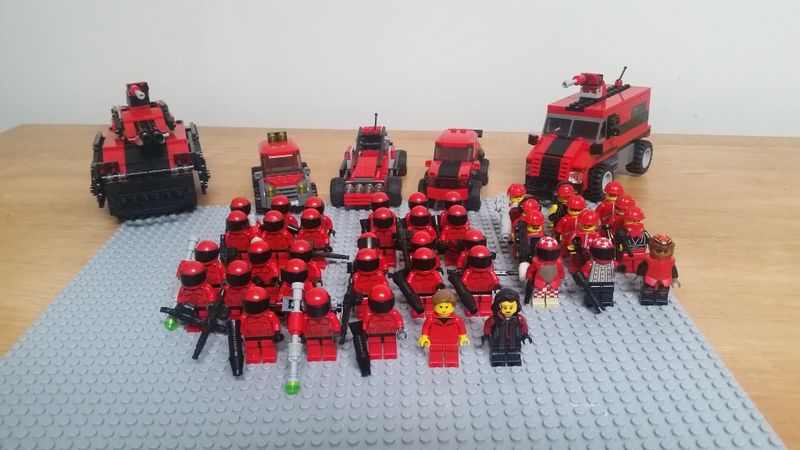 The Chervona bryhada is a far right ultranationalist group operating in the western systems of the Gold Sector, specifically the self proclaimed Star Republik of Varyag. The group was created shortly after current Galacian leader J. Lahey began his rule, The previous president, Stepan Tesarik had remained in the government as a regional governor, But after a few months had become increasingly paranoid and obsessed with fighting the "peach threat" in the sector and was unhappy with the current government and military's neglect of what he thought was a serious threat. Tesarik's hate and paranoia overtook him and eventually he abandoned his title of governor and fled west, The mostly lawless Ruby subsector had become a breeding ground of gangs, mercenaries and paramilitary groups. His celebrity garnered a lot of attention, and when he began propagating hardline, anti peach ultranationalist rhetoric, others took notice. Eventually like minded followers began to grow, and the movement became armed, and then militarized.

Eventually, when reconciliation and became impossible, with fighters and civilians alike in the Bryhada controlled territories were effectively declared stateless and banned from returning to Galacia, the region became the self proclaimed Star Republik of Varyag. A rogue, unrecognized state, with the elites of the Cherhovna Bryhada acting as the self declared government of this terrorist state. Varyag would become locked in a gruesome war against both the Kopachy system, and the Peacheneg Armata Coalition. Eventually they were declared an enemy of the Imperiya as well after rogue elements from the system started attackign Imperiya ships.

Cherhovna Bryhada forces usually deploy a few platoons of troops and vehicles at most in a conflict, They are not equipped for combat across a long front, They specialize in the taking and holding of key positions through sheer determination, violence, and reckless abandon in combat.

Cherhovna Bryhada is not a standing army that recieves government funding, so much of their equipment is either black market, salvaged, or stolen. However they follow a doctrine of heavy armor and overwhelming firepower, making them a very serious threat. Most of their vehicles are heavily armored and those that are not, are fast and nimble