Nestled somewhere in the more mountainous terrain of Medivo, where few minifigs can withstand the chilling temperatures and harsh blizzard-like weather, (especially during the actual Winter months) lie the settlements of a desolate faction known as the People of Frostborne. These warriors don’t normally trouble themselves with the other minifig factions below, and have kept to themselves for the few generations that they have lived in their icy homes. They have built their tinier-than-most civilization from the foundation of cold hardship.

Their ancestors were just a small force of barbarians who had been driven from their homes hundreds of years ago by wild beastmen and ork alike, fleeing into the mountains until the monsters turned and abandoned the pursuit, the chill that crept down the mountainside perhaps being too much for them. Life after that wasn't easy for the barbarians. They tried creating an existence for themselves up in the mountains, building a small but hearty settlement. Many had died during this process, the cold being too much for them. However, they did not all perish, that to this day is very apparent.

Since the darker ages, the barbarian tribe had become accustomed to the bitter temperatures and soon their petty village grew larger and their people stronger, in a time they call today “The Rise of Frost”. Since the Rise, the barbarians were given another chance. In a sense, they believed they had been gifted by the BrikGods and “born again from ice and snow”, hence the name “Frostborne.” Frostskin, masters of the cold. A few other names have been given among themselves.

You would think that after The Rise, the Frostbornians would have given up their icy homes and picked sides long ago among the legions of other factions, but little has been said between them and any other minifig of Medivo. In the years that followed, no such communication has been made and many outsiders began to believe that something might have happened to Frostborne, perhaps the cold had finally wiped them out? In time, they were nearly forgotten by the world as the age had grown older. Now however, they have been making more and more appearances outside of their settlements than ever before. It’s now ostensible that Frostborne is back, but to what end? What could their sudden return mean?

It is speculated by other minifigs that perhaps the Frostbornians have grown bored of the day-to-day grind of life up in the mountains, and want to make something of themselves among the various conflicts below. How they were able to thrive and build a little kingdom for themselves in such an unforgiving environment might be proof that they are made of tougher stuff than their small numbers might suggest. 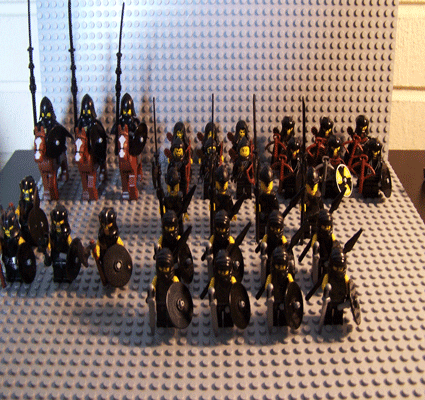 motorhead fan
I want to climb on to thevengefulone, stick my tongue into his ear and ride him all the way to satan.
Posts: 1693
Joined: Sat Jul 20, 2013 9:17 am
Location: Rolled up in a ball in a corner, quietly vomiting.

Re: The Realm of Frostborne 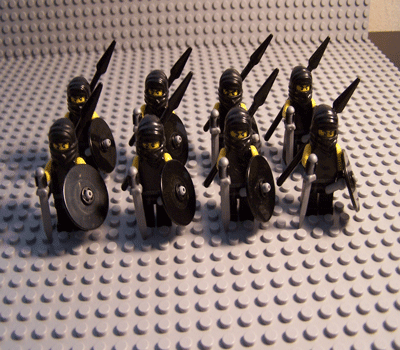 Frostbornian Armsmen, the main infantry. These lightly armed and armored warriors can act as both CC and ranged units, thanks to the javelins mounted on their backs. 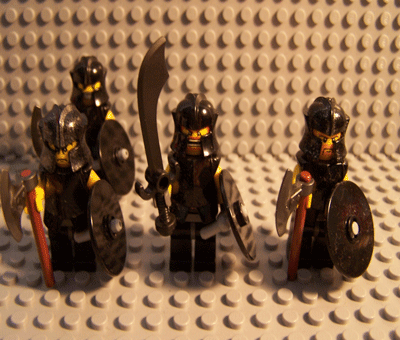 Heavy Armsmen. These warriors are much better-armed and armored then their light infantry-ish counterparts. At this moment, I only had enough to make a small handful but I'll be aiming to get in at least a squad's worth (6). 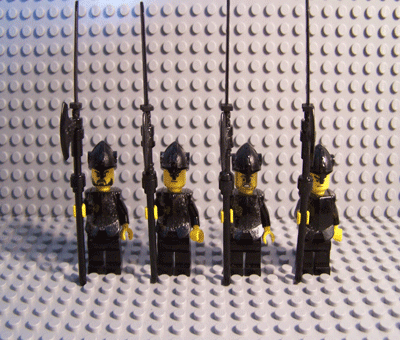 Halberdiers. These men specialize in defensive movements, with weapons effective for slicing through heavy armor and cavalry unit alike. Their halberds are inspired by a certain weapon armed by Lord Mercat's Mythic Order. 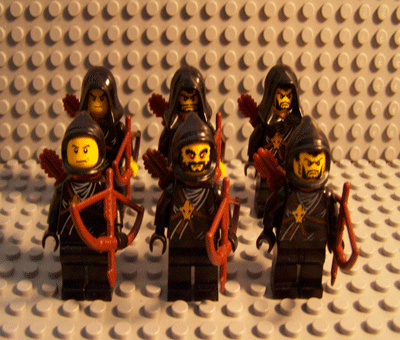 Bowmen. Frostborne's main ranged unit, these archers are standard and nothing too flashy. 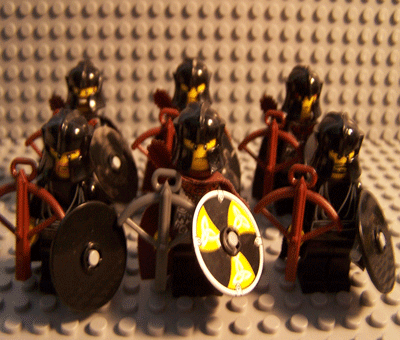 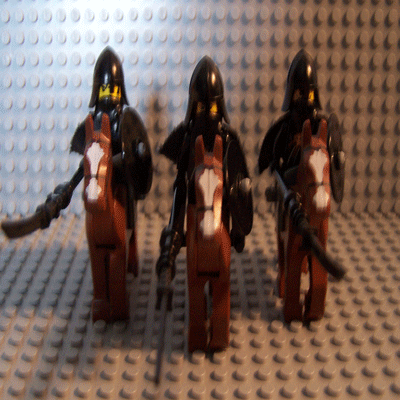 Frostbornian cavalry. Armored and rather formidable-looking if I do say so myself. Need more of them though, of course. 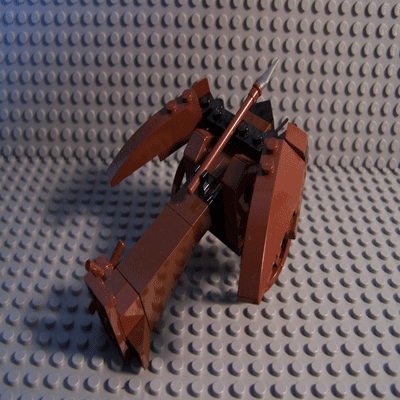 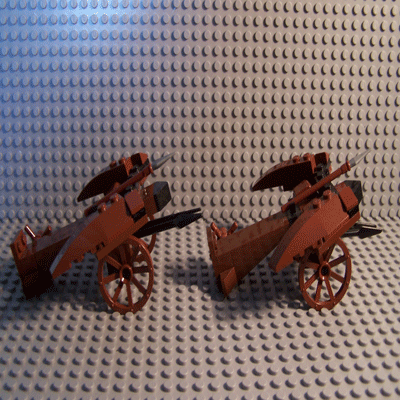 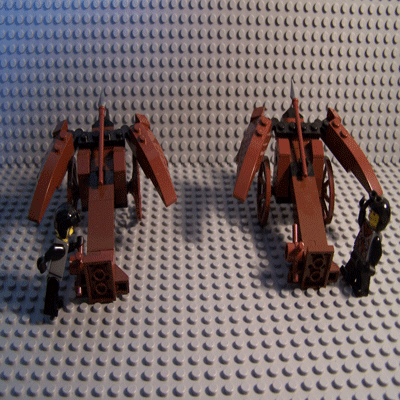 Frostbornian Ballista. Small but very mobile, these tiny warmachines are ideal against infantry and cavalry alike. 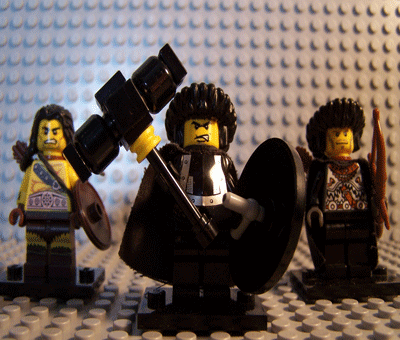 Lastly (for now), we have a trio of Frostbornian's most well-known and accomplished warriors. Barbous Blokhead, current leader of the Frostborne Tribe (middle), his son Farcus (Left) and his brother Urgus (right).
Last edited by Kommander Ken on Sun Dec 06, 2015 7:41 pm, edited 2 times in total.

That ballista is awesome, probably the best one I've yet seen. The troops look nice, and I like the consistent color scheme you have going. The only criticism I have is that they seem to be giving off more of a "bandit horde" vibe than the "arctic barbarian" theme you were shooting for,but maybe that's just me.
Top

I love the ballista and those bowmen look really cool! I do have to agree with battlegrinder on the fact they do have a bandit look.
You are faced with door what do you do
I use my flamethrower
wait what you can't do that
Sure I can see
*door catches fire*
Top

Thanks for the feedback.

I actually have a couple reasons why they don't look very "articish". One of them being the fact that I didn't think I had enough minifig parts in white or enough minifig hood pieces. Another reason (which I considered while first building the army) was that darker clothes tend to absorb the rays of the sun better than lighter, thus making the wearer warmer and whatnot. That doesn't mean I won't be using lighter colors, though. I already have a few units in mind, especially a few scouts.

I like it, good to see more medivo.
The only unflawed system is Lego System.

Wait, is Medivo a planet? 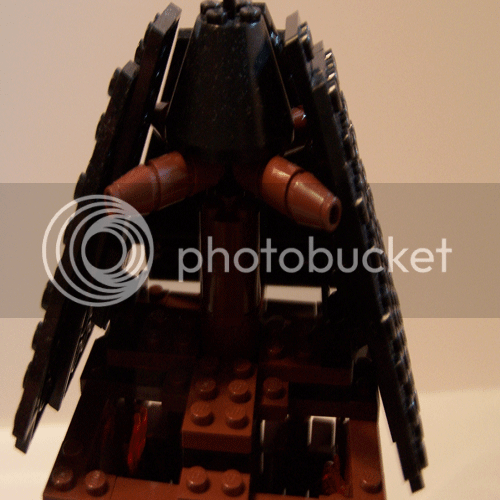 A peek at how I made the roof.

Here's a top of the top floor of the guardhouse, complete with a working trapdoor. 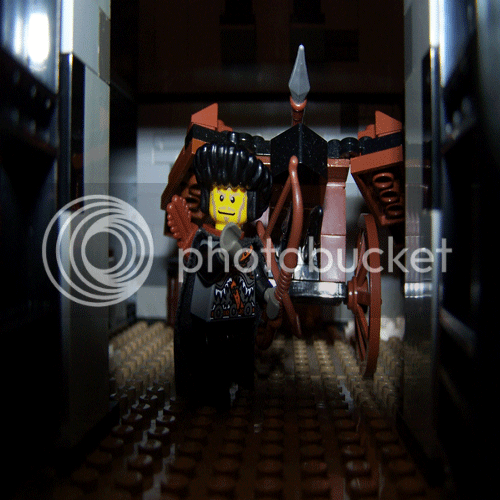 I thought the lighting here was kinda cool, so I decided to keep this picture instead of attempting to edit it.

Nice! Wish I could pull off such architecture one day.

Very impressive. I like how the walls were made of two different greys.
This sig is too fucking large: show anyway

Very nice, especially the buildings.
Maybe you could get some of the polar bears from the coming arctic sets for cavalry mounts.
"For whoever would save his life will lose it, but whoever loses his life for my sake and the gospel's will save it. For what does it profit a man to gain the whole world and forfeit his soul?" Mark 8:35-36
Top

Coriolanus wrote:Very nice, especially the buildings.
Maybe you could get some of the polar bears from the coming arctic sets for cavalry mounts.