I've Gathered a mortal crew, except they all died on the first voyage(Apparently, The human body isn't capable of surviving a flight on a pirate ship suspended up by a Celestial Thunderstorm.) So now, i am drowning my sorrows at the bar closest to the port.
Top

Hero Machine froze on me, so imagine Skeletor with goat legs and a bunch of exotic weapons.

I've been tending to the outlying forest, but the strength of the undead in the wilds is too strong for even the Lord of Death to endure. A few names are marked in my book in this town, but I have no idea their faces or positions. They are:

@IV
You (I assume) ask around for where you can find some of these people. Mostly nothing, but you do get a good lead that Lukas Tremble frequents the local bar.
I'll figure out more ways to get you people together as time marches on. Just go about your business for now.

I make my way to the bar, and though my overcoat covers most of them, many of my various weapons are still clearly visible, and I make very little attempt to hide them. I'm not planning on making my move quite yet, but what do I see there/along the way?

I am the bartender, and I look like this: 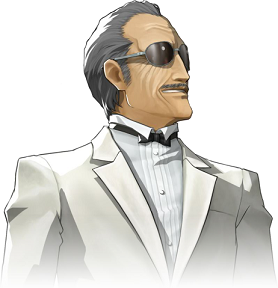 As IV enters the bar, a series of events transpire very quickly.
First, Keldo get a feeling like a river rushing through his mind, while Orem tastes lightning at the back of his throat. IV gets both a sense of power (couldn't think of a good sense for this for a death god) as well as a distinct feeling that death is near. A mere moment later, someone with long brown hair and several scars stands quickly and grabs the nearest person, holding a dagger to their throat and shouting "Okay, you're all going to do as I say, understood? You, drowning your sorrows at the bar, you look like a captain, and that's good, cause I need a ship, NOW! And you with the weapons, drop 'em or I start offing folks, and believe me, I have more than just a dagger."

"Meh, I don't really have anything else planned, but I don't think a dead crew could do anything. Tell you what, Drop the knife and you can JOIN my crew. or I just enact vengeance upon you, then Put your corpse out to market. Your choice, but i'd choose the first one."

(( If i do This, I try to use a bit of thralldom power on a target to influence them.
Top

His voice and nerve seems to be failing him."N-no way. I know there after me. I'm... I'm not dropping my knife, you got that?" He looks around the room and shouts; "I'M NOT GOING BACK, NOT EVER! I'M NEVER GOING BACK TO THAT FUCKING PLACE, YOU HEAR ME!" He reaches for his hip with a trembling hand, hovering just above it.

Turn invisible, move behind him, and whisper in his ear, "We are always watching you".

Glasses shatter against the tiled floor of the bar as the old man in white pulls a shotgun out from under the bartop.

"Boy, you will put down that knife and get your hand away from that pistol, or so help me, I will send your stupid fucking ass to the worst place you could ever imagine!"

The knife clatters to the floor, followed by the man.
"I can't go back. I can't go back"
He just repeats that, over and over again.

Just what happened to the hostage?

Hostage bolted as soon as the dude dropped the knife.

I continue to stand, unfazed.

Is this Tommy Tremble? I ask a couple patrons if they know the name.

Plastik Armory: a bunch of weapons and abilities compatible with the 2010 rules.
Top
Post Reply
73 posts