Cute Birb tries to take a good bite out of Malvoggar, Lord of Suffering, but it fails. Leggy Boi is so cute that Robot Demon II's internet reblogging core malfunctions and his head explodes.

Princess Petalbloom attacks Malvoggar with her wand, but he deflects it.

Lord Malvoggar and his one remaining minion exchange tearful, fiery stares that are full of emotion and meaning.

Then Robot Demon I leaps into the Adorrible pagoda, overcharging the nuclear reactor of evil that is his heart.

The resulting explosion is pretty significant. One Adorrible manages to bail into a tree. The Princess, however, doesn't quite make it out of the blast radius - and redshirts the gnarly blond Adorrible. The Pagoda loses two out of its four points of size, but it'll still fly - for now.

Malvoggar impales Cute Birb on his Staff of Suffering. Ouch.

The Lords all spend their moves to climb to the battlements. 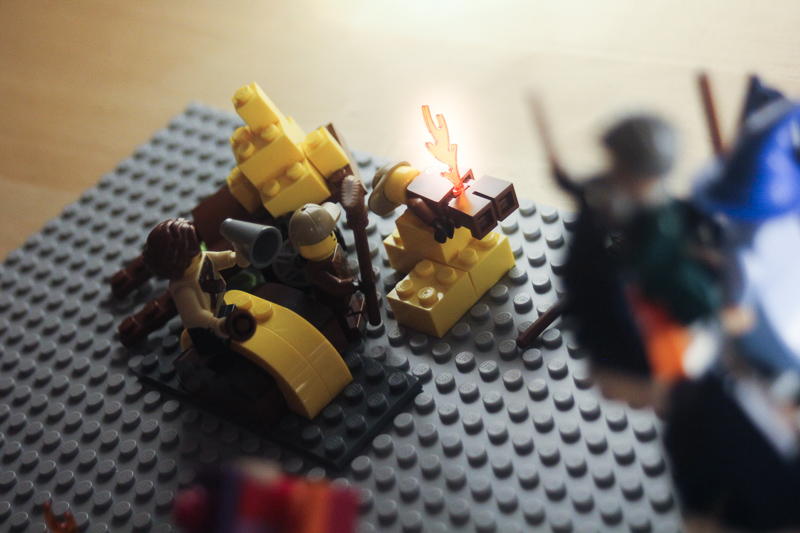 The one with the wizard hat uses his Staff's extra range to cast a fireball on the Revolting Orphans. It kills one and sets him on fire. Luckily he's on a massive pile of very flammable hay. 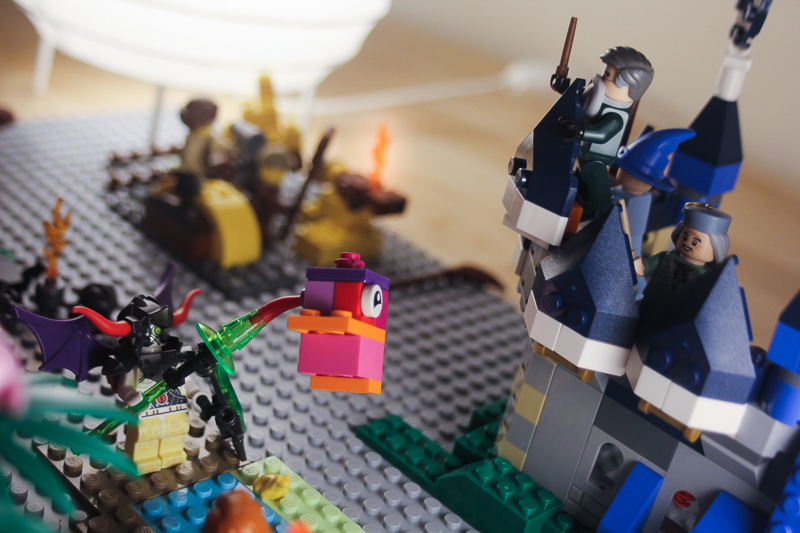 Lord Burgund and the green wizard combine fire on Malvoggar, since he's the most threatening target nearby. They do amazingly poorly, and Malvoggar is unscathed.

Sir Bentley hops into the Battle Tractor parked on the corner of the map and revs it loudly. 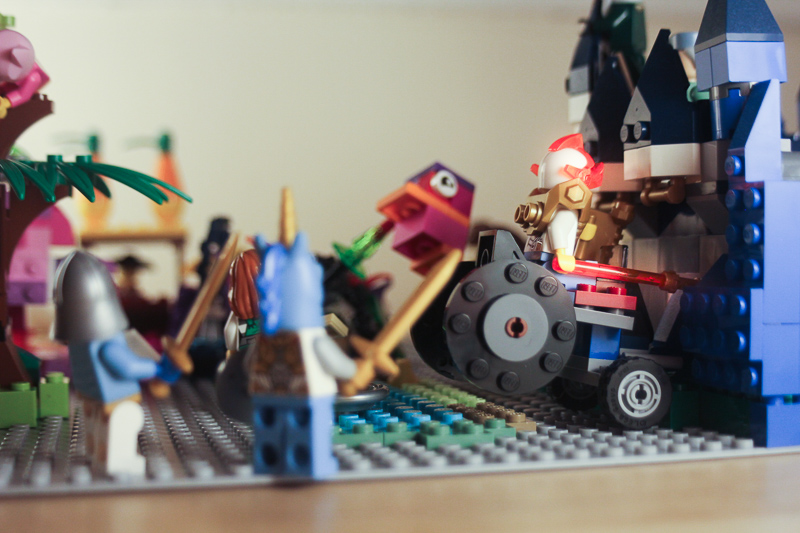 He then drives it directly into the castle wall!

It does a whopping 34 points of damage - enough to break down one entire side of the wall. Lord Burgund is tossed into the courtyard. 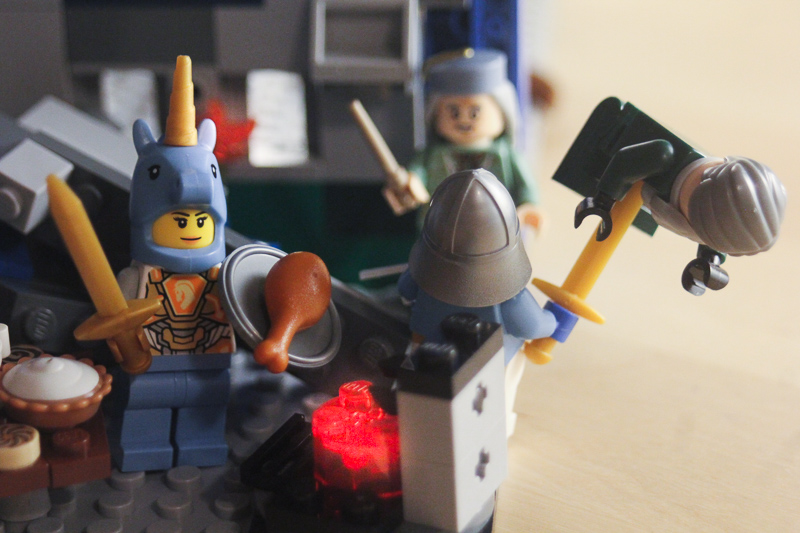 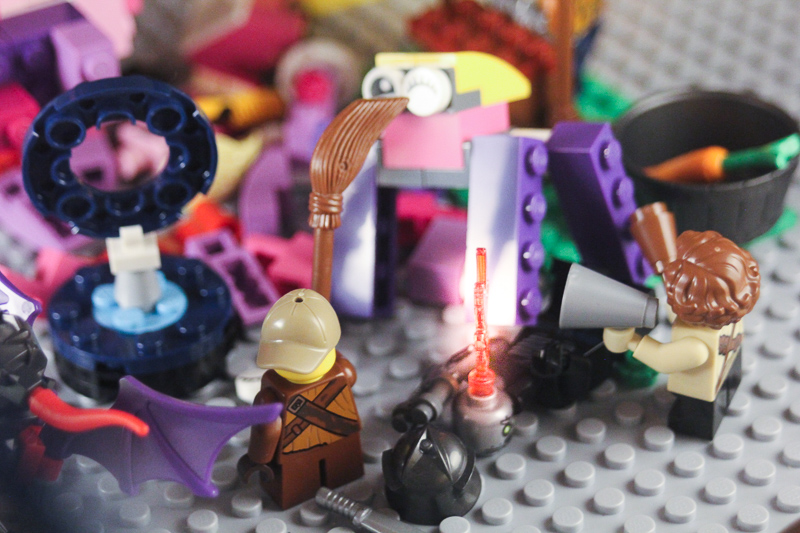 The orphans advance on Leggy Boi. Jacque laughs into his megaphone while his goon beats it to death with a broom. 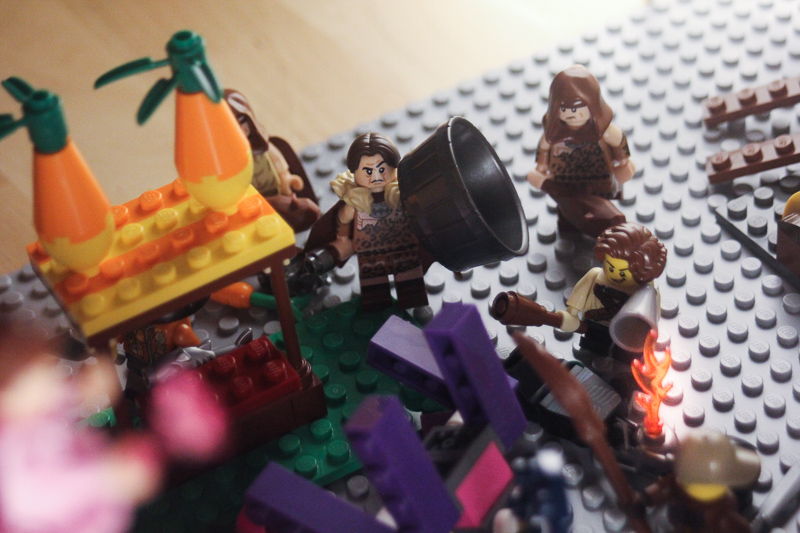 Chief Grunbog picks up the metal barrel from the food stand, and Heroically chucks it at Princess Petalbloom.

The haybales ignite. That thing is now a major fire hazard.

A peasant, feeling heroic, chucks their sock at Malvoggar! It critically fails.

And they're devoured by the alligator who was submerged beneath the surface of the pond.

The food stand peasant lops his own arm off with his cleaver before getting clubbed by a Barbarian. 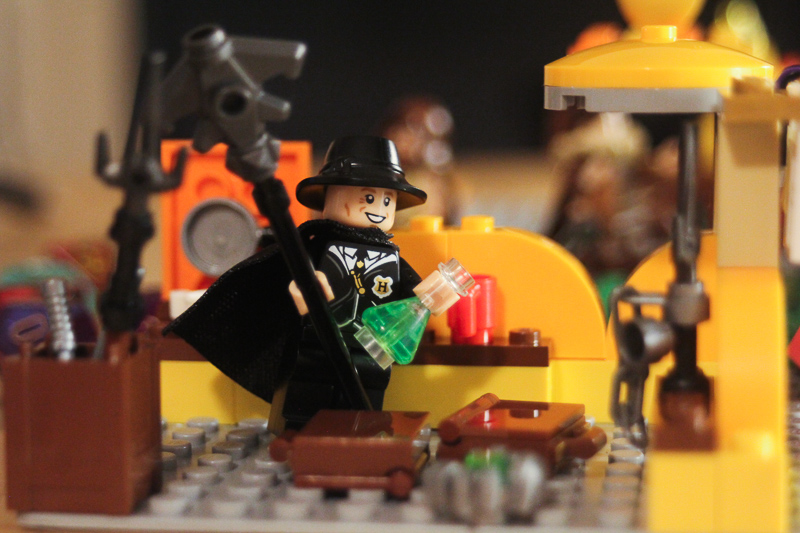 And the Golden Goose shopkeep grabs some gear. He's going to defend his storefront at all costs! 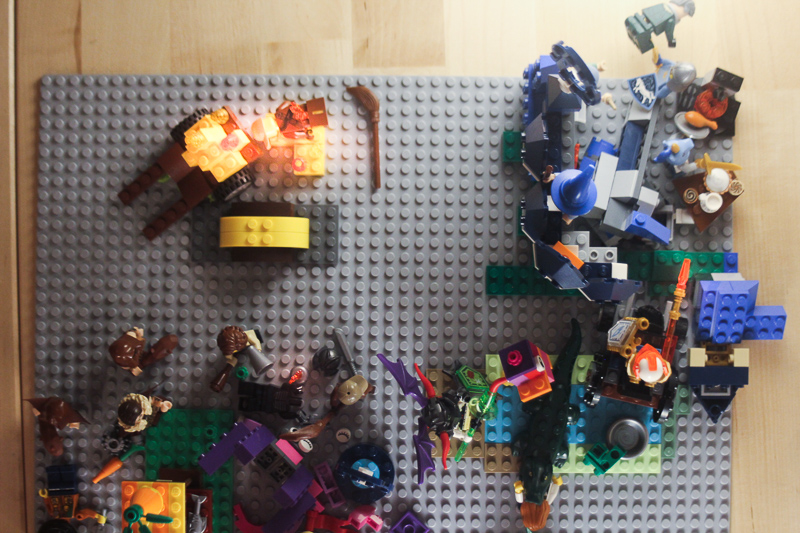 Adorribles - Nemoto-Sensei Princess Petalbloom, the half-destroyed Pagoda, and the one Adorrible in the tree.
Robot Demons - Ninja_Bait Lord Malvoggar.
Lords of Belganus - Dayboost_ Lord Burgund in the courtyard and the Hat Wizard on the battlements.
Star Knights - Baconquistador Sir Bentley in the Battle Tractor, and both knights in the courtyard.
Orphans - Jacque and one goon in the map center.
Barbarians - Chief Grunbog and both barbarians.
Crimson Eye - KommanderKen The Impersonator hasn't been revealed yet, and the Thief has gained one turn of Stealth.

Re: Battle in the Chat: Hungry for Chaos Turn 1 [HH]

I want my Princess to pick up the haybale and chuck it at the castle. The adorb troops then attack the castle and the knights within.
Top

Lord Malvoggar uses his demonic nanorobots to convert the crocodile into a minion
I make apocalypses and apocalypse accessories.