--> for the full experience read this and this first. <-- 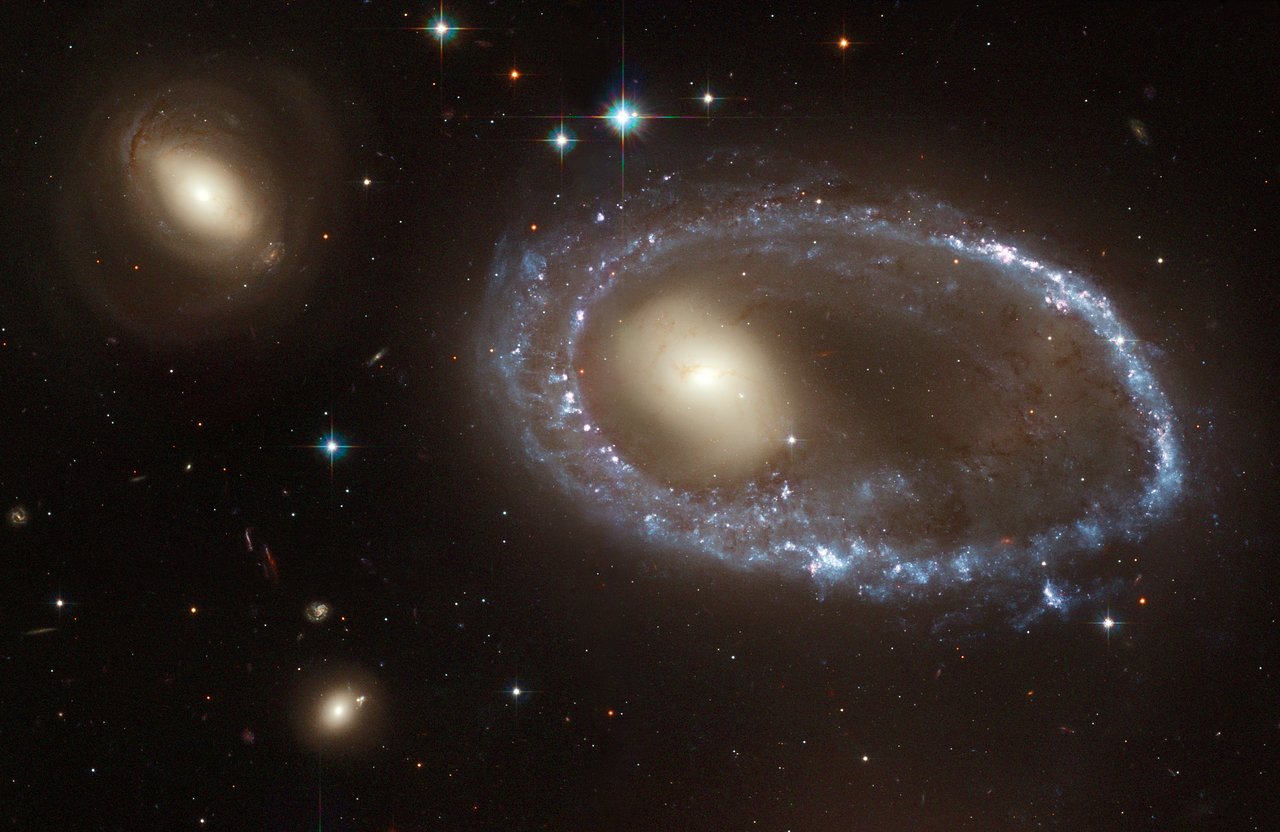 The Henndirro Galaxy. A rather small ring galaxy, yet full of wonders and lifeforms of all kind, inhabitated by billions of minifigs organized in hundreds of starfaring civilizations. One of these civilizations is the Ulrion Commonwealth 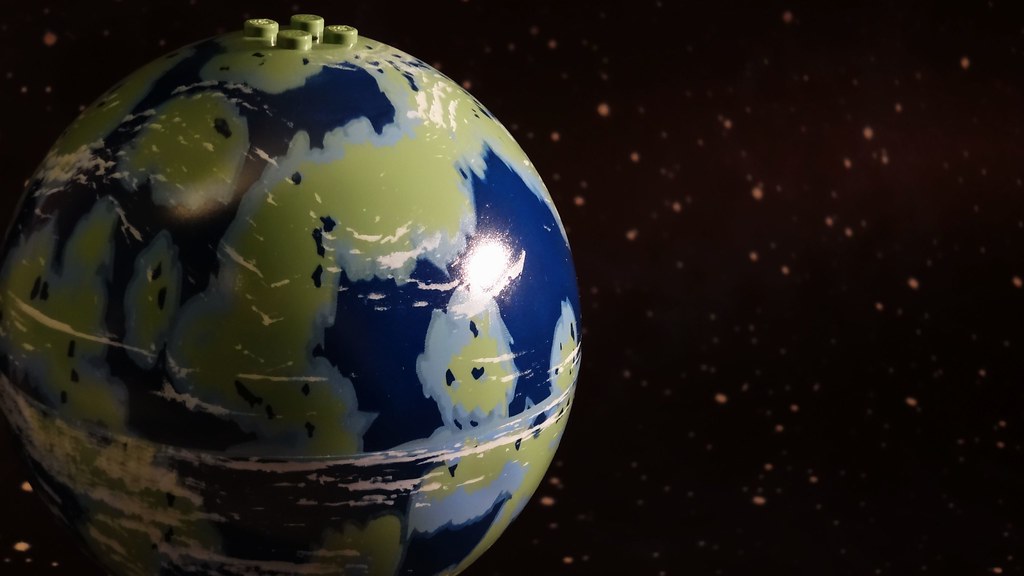 The Commonwealth exists for some hundred years, and consists of several star systems with a few thousand habitated planets and thousands of outposts, relais stations and starbases around its borders. The political center of the Commonwealth is the Ulrion System, more precisely Ulrion Prime, the most densely populated planet with several millions of people. 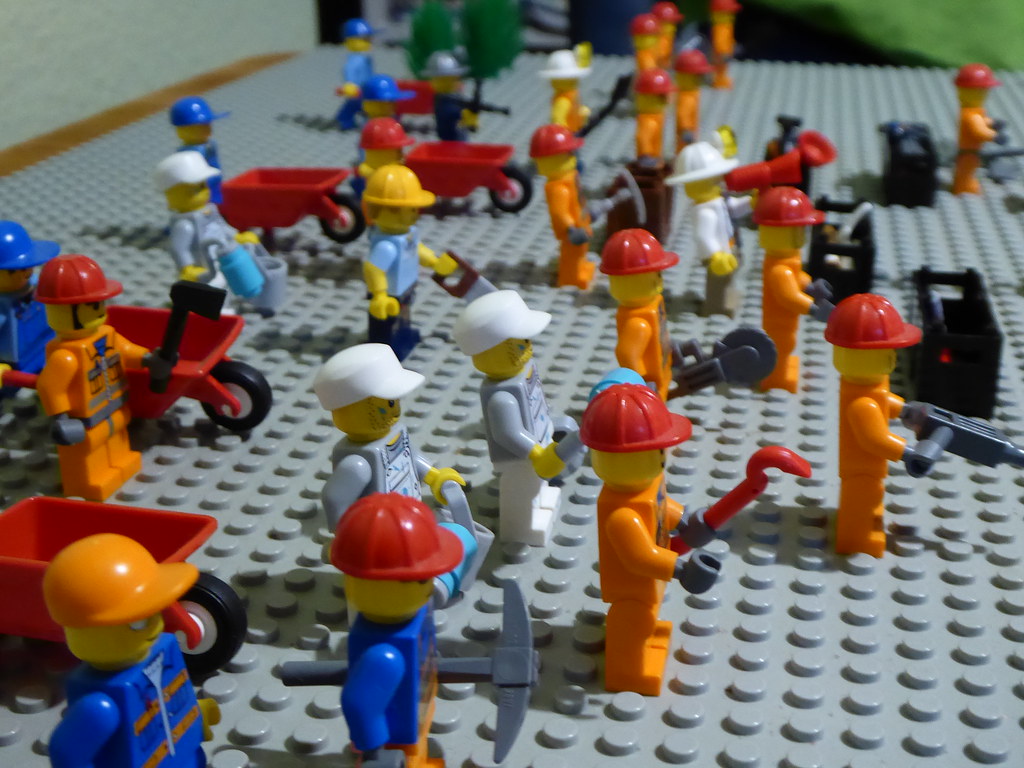 Yet, like in many modern civilizations, the greed of the mighty and the mismanagement of the bureaucracy has led to great poverty and despair on many of the Commonwealths worlds, leading to dissatisfaction and finally insurrections - most likely ignited by the worker class - on nearly all planets. the revolters proclaimed that none of the actions of the upper class serve the common wealth anymore. At this point, several respectable leaders contacted the M-Throne Empire - with wich the Commonwealth had some loose diplomatic relations to that point - and bespoke them for help. 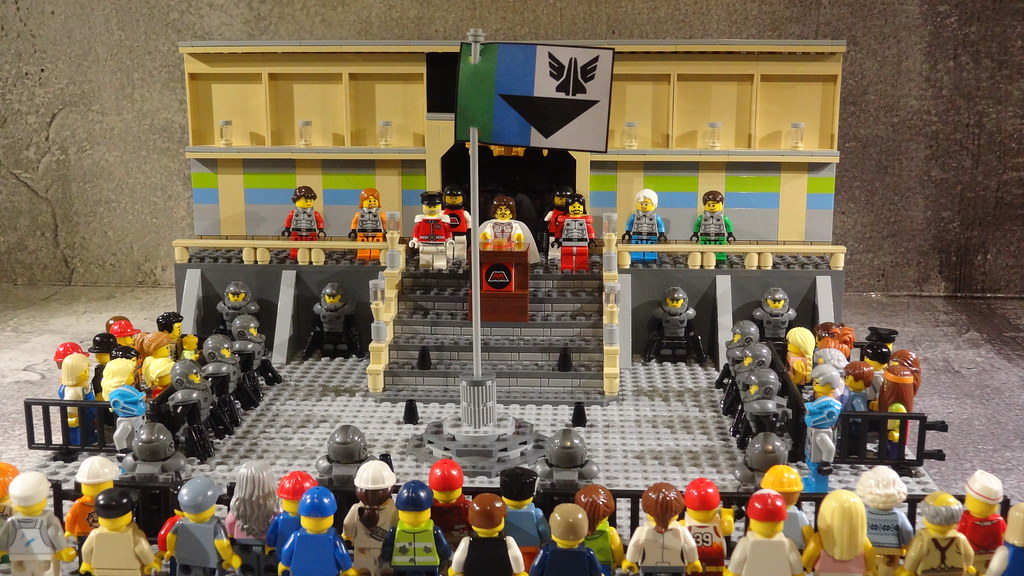 And now we witness how Ambassador Sigmund Weisswelt of the Empire addresses the people of Ulrion Prime - and thanks to Intergalactic TV therefore also the complete Commonwealth and the rest of the Henndirro Galaxy - in a touching and electrifying speech, directly after the treaty for the incorporation of the Commonwealth has been signed. 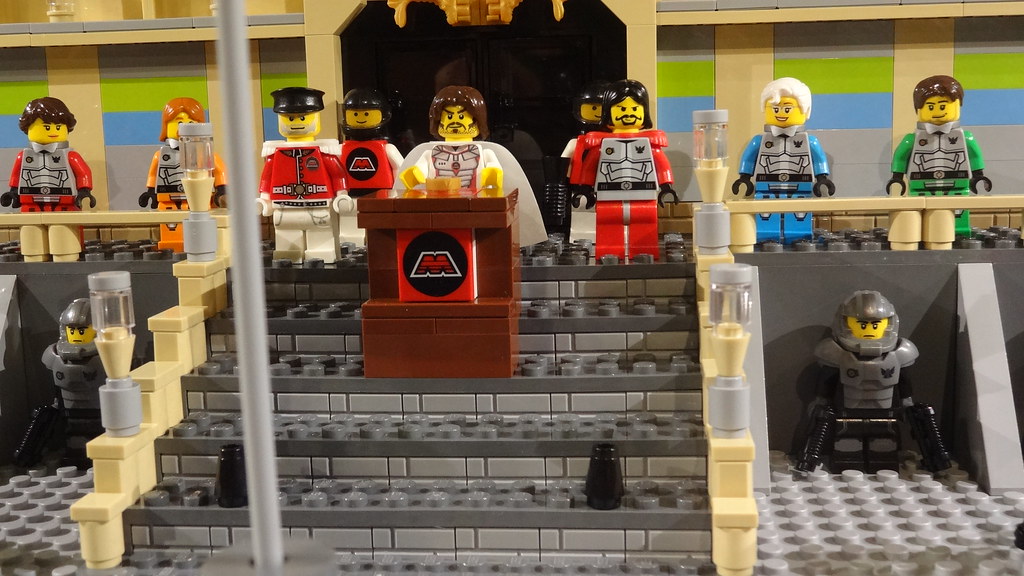 "People of the Commonwealth, People of Henndirro! I am Ambassador Sigmund Weisswelt from the M-Throne Empire. As many of you already have noticed, there are a lot of changes going on at the moment. Your noble leaders turned to us in times of great despair, and we came for help." 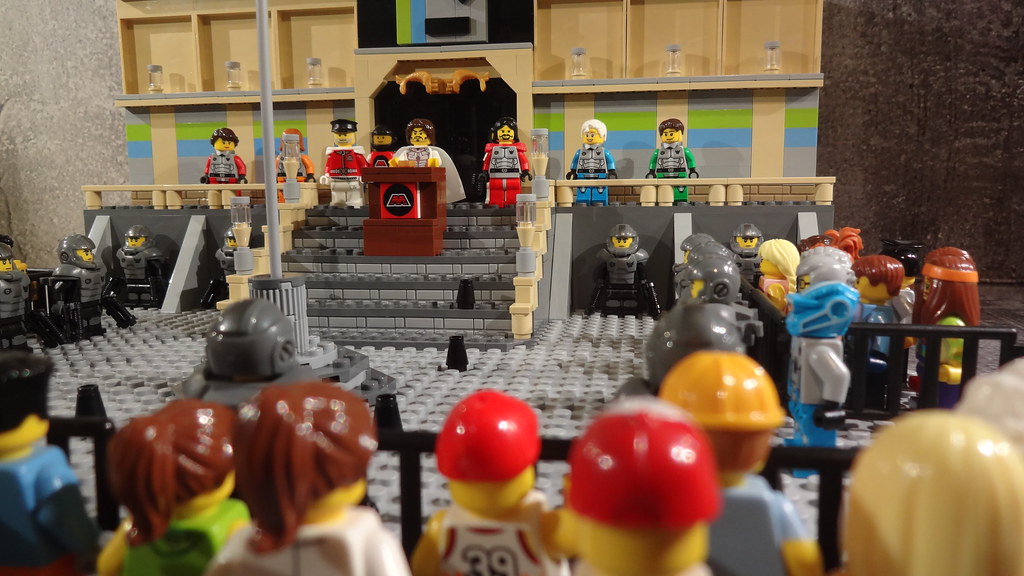 "Like many other cultures that we met and befriended, your government was led by corruption, greed and political power games that only serve a few individuals at the expense of many others. In the Empire we found truth in the fact that political systems like this will always be exploited by a few individuals greedy for power, and therefore will always end sometime like your Commonwealth has done now." 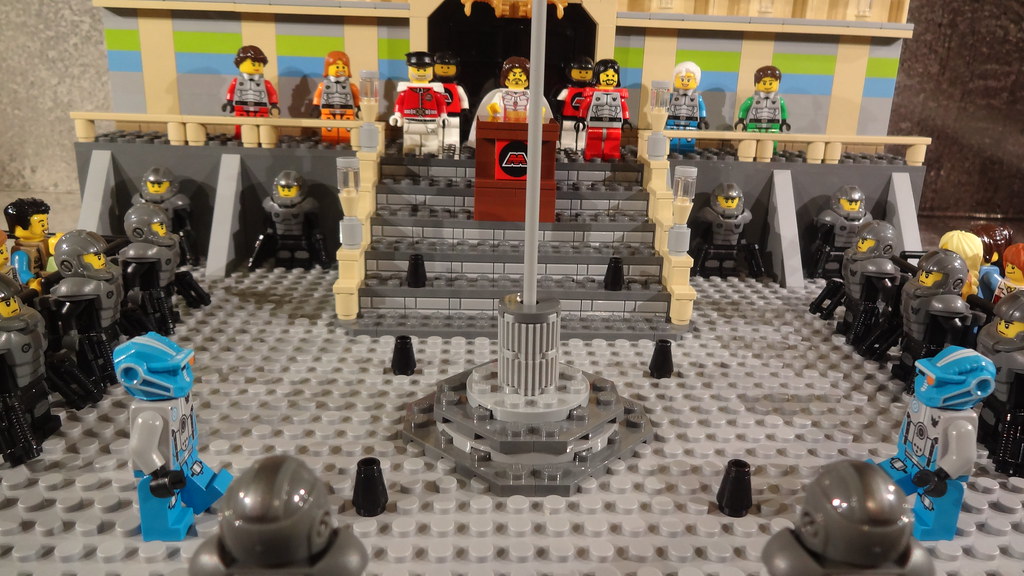 "The Emperor has recognized a long time ago, that only one way of life leads to affluence and contentedness for every being. He wants to establish the greater good for every lifeform in the brikverse. And it works with every single world that joined us. And it will work for you. The leaders around me are willing to serve the Emperor and the greater good, and renounce the excruciating way of life that many of the other leaders were devoted to." 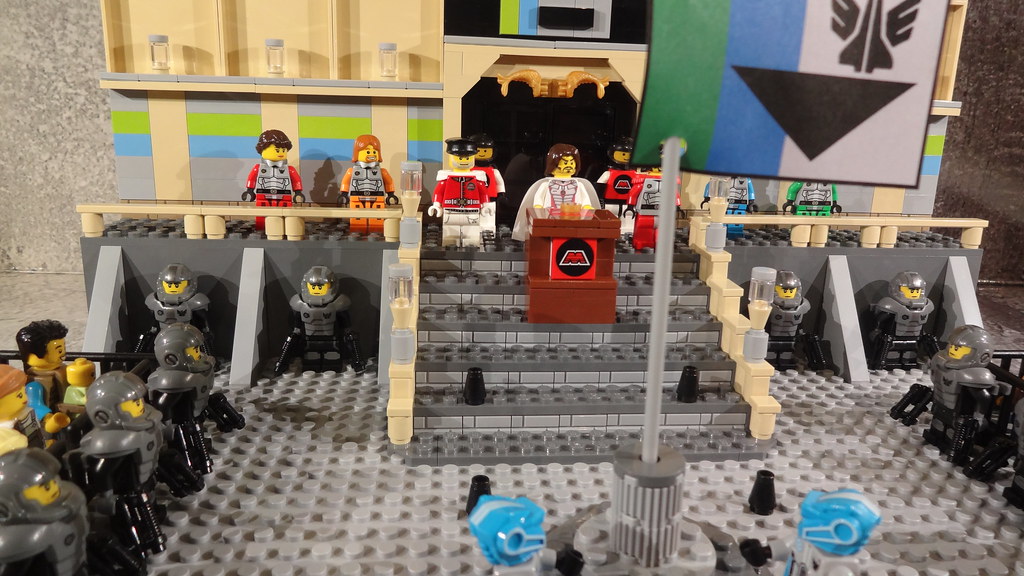 "So be assured - the times of despair and suffering are over. As long as we all strive for the greater good, there will be prosperity, safety and fulfillment for all of us!"

The crowd is filled with approving murmur 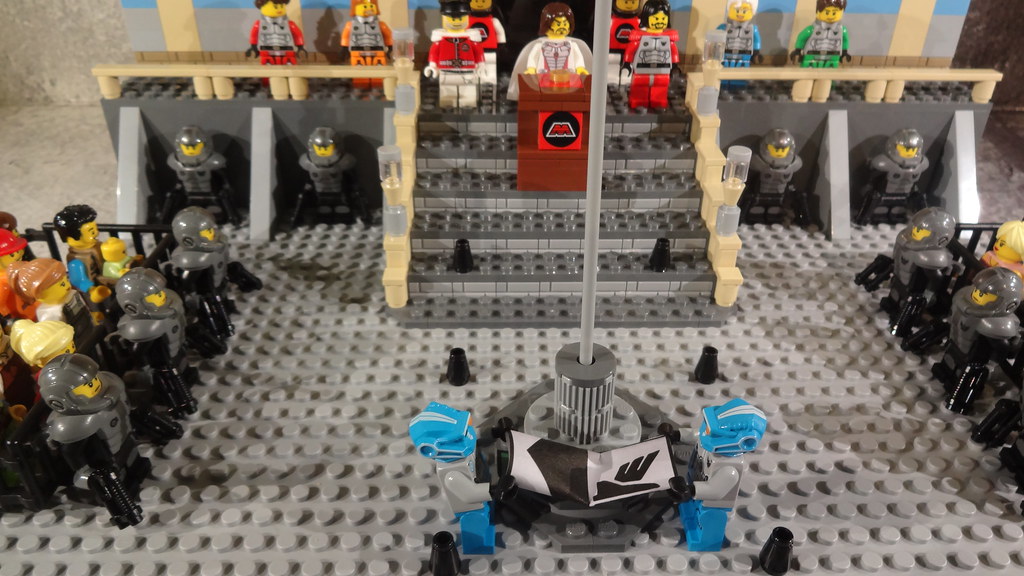 "However we are not here to conquer or annex your worlds. And it`s not the Emperor`s will to force our legal system on other worlds. the treaty we signed grants you nearly all of the rights and privileges you had before, with just the new government standing under the jurisdiction of the Empire." 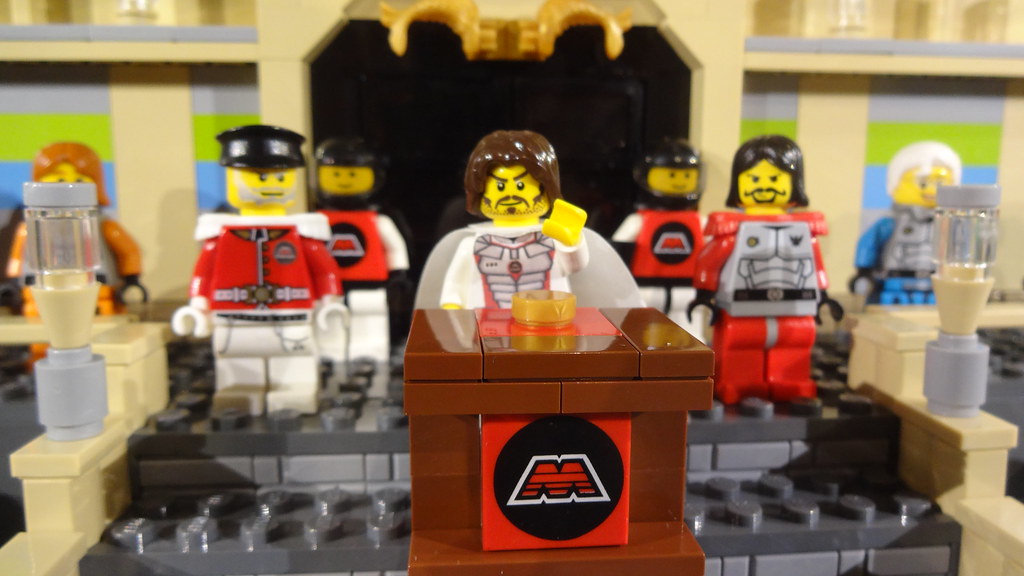 "And so, without further ado, I declare the Ulrion Commonwealth invalid..." 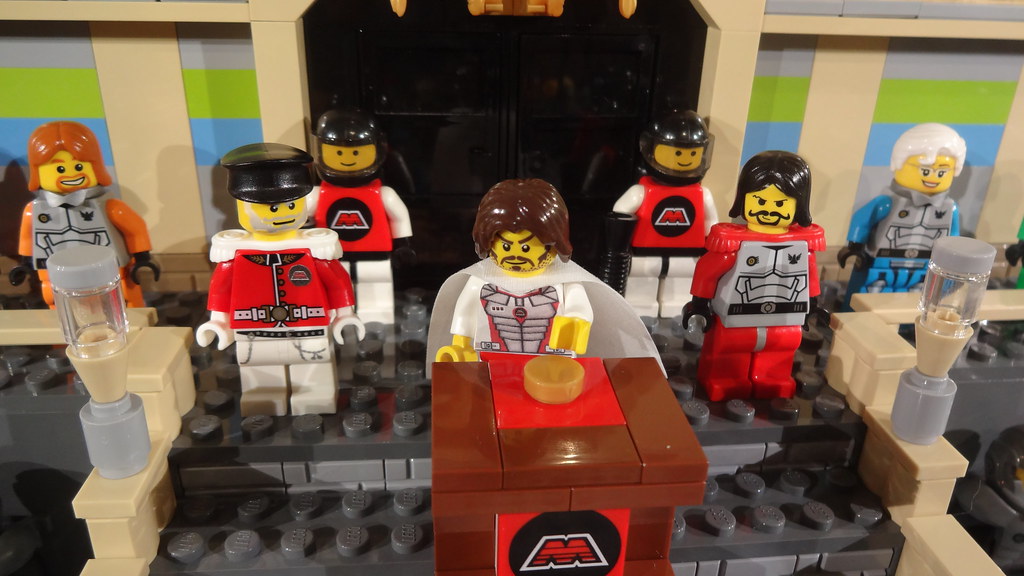 The Ambassador demonstratively pushes the large golden button on his lectern. The suspense in the crowd becomes nearly tangible... 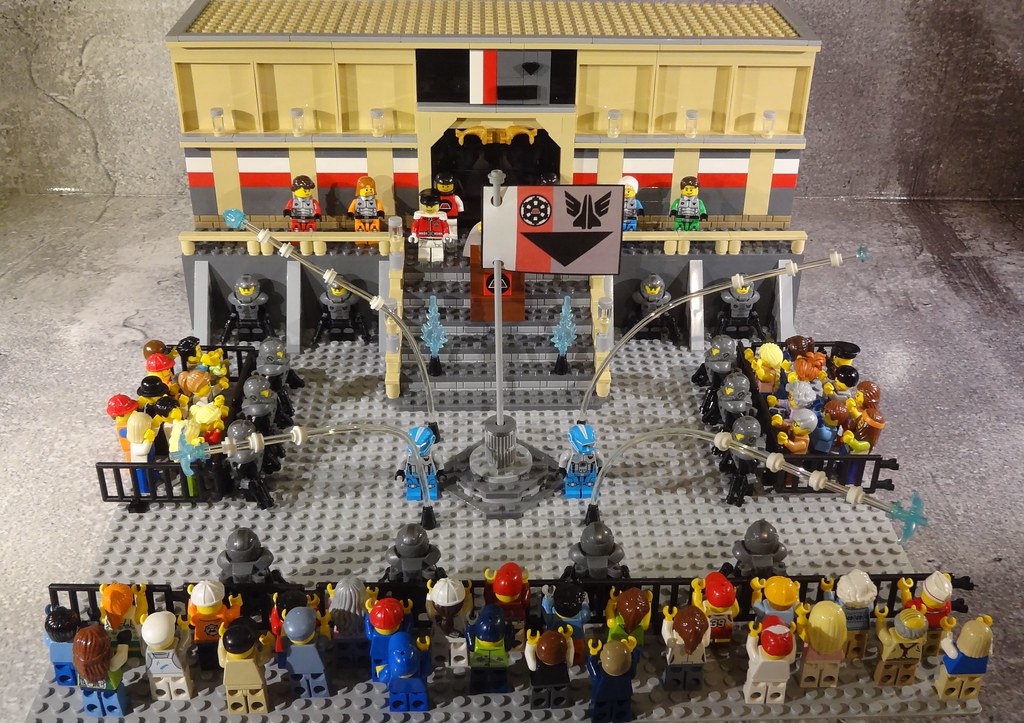 "...and I may welcome you all as citizens of the M-Throne Empire in the ULRION PROTECTORATE!" 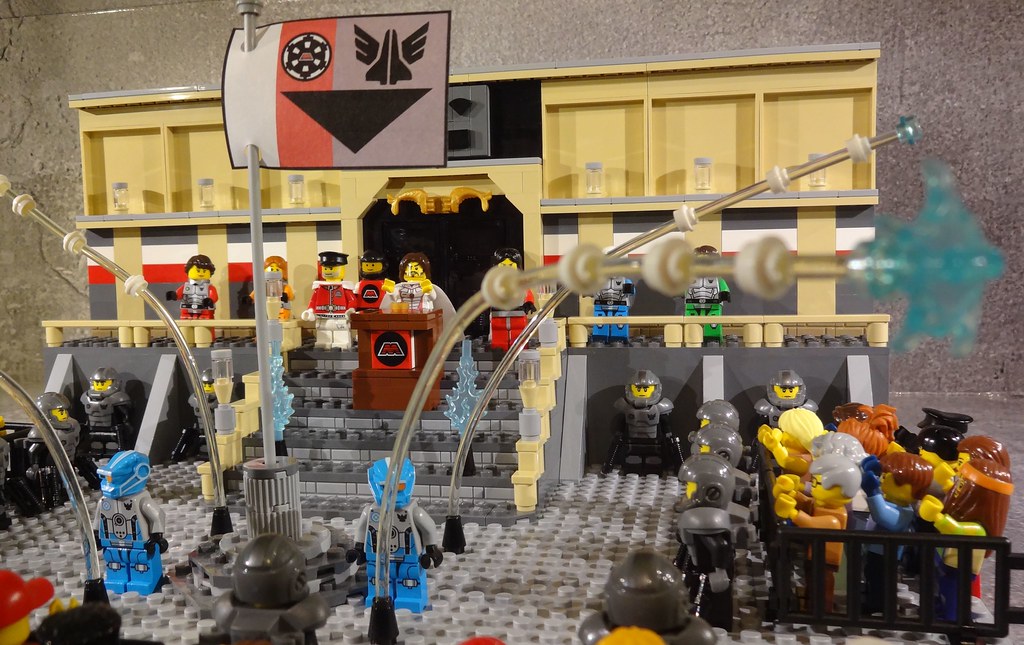 A long and thundering applaus fills the square, as fireworks shoot across the sky and the flag of the newborn Protectorate gets raised. The Empire successfully arrives in the Henndirro galaxy, and guides another Civilization to the path of the greater good! 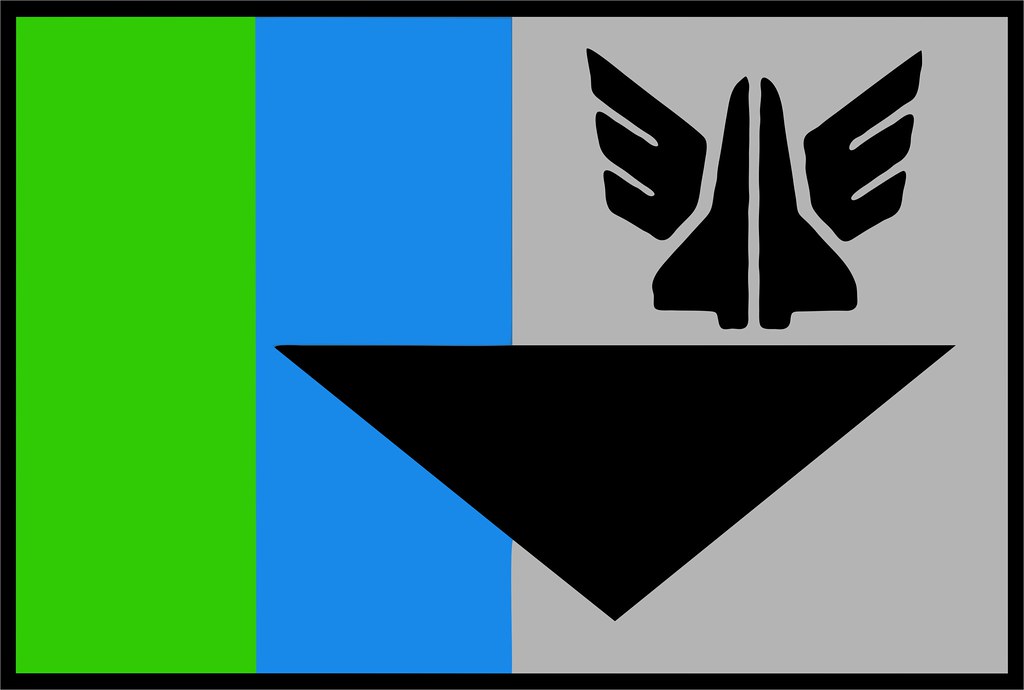 Flag of the Ulrion Commonwealth 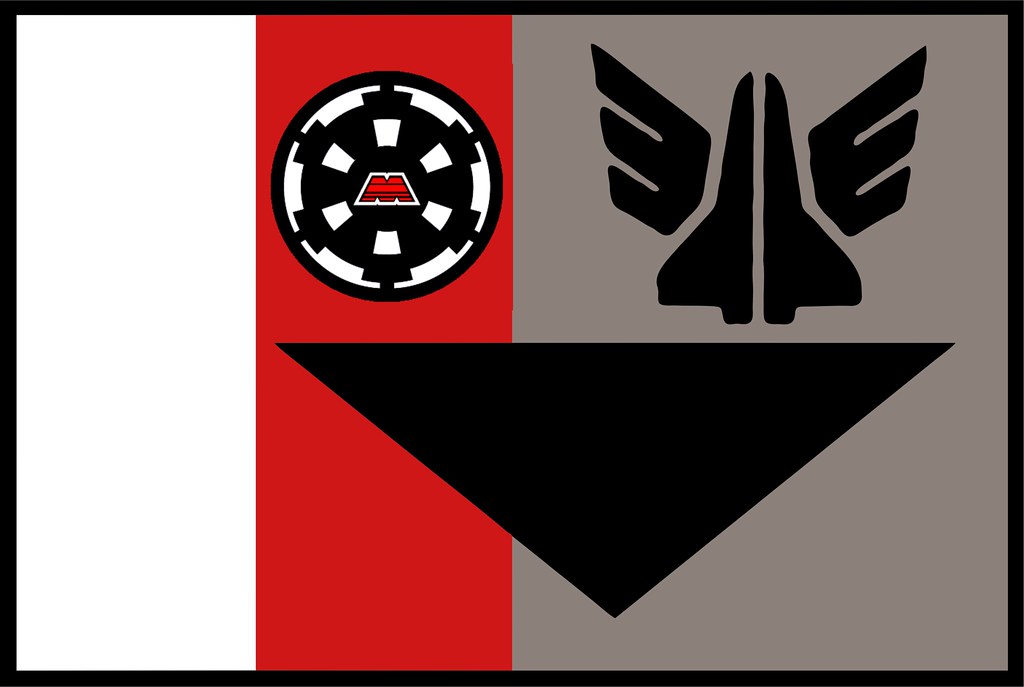 Flag of the Ulrion Protectorate

Well, I guess that`s it. Was a lot of work, but fun to make it. Enjoy!
Compendium of my works

I hope you don't mind... but I'm going to steal one of those flags to use the higher res galaxy squad logo. I needed it for something and I wasn't able to find it for the longest time

This is one perfect entry! The preludes and this entry are perfect soaps both buildswise and storywise. I really like the change of the color of the walls etc simultaniously with the flag. Amazing!

I've added This wonderful cameo to the wiki page:
https://brikwars.com/wiki/M-Throne_Empi ... one_Cameos
My Youtube Channel About LEGO and Toys
Top

Thanks, I`m really feeling honoured. And I also plan to extend the Cameo Troops a little in the near future.