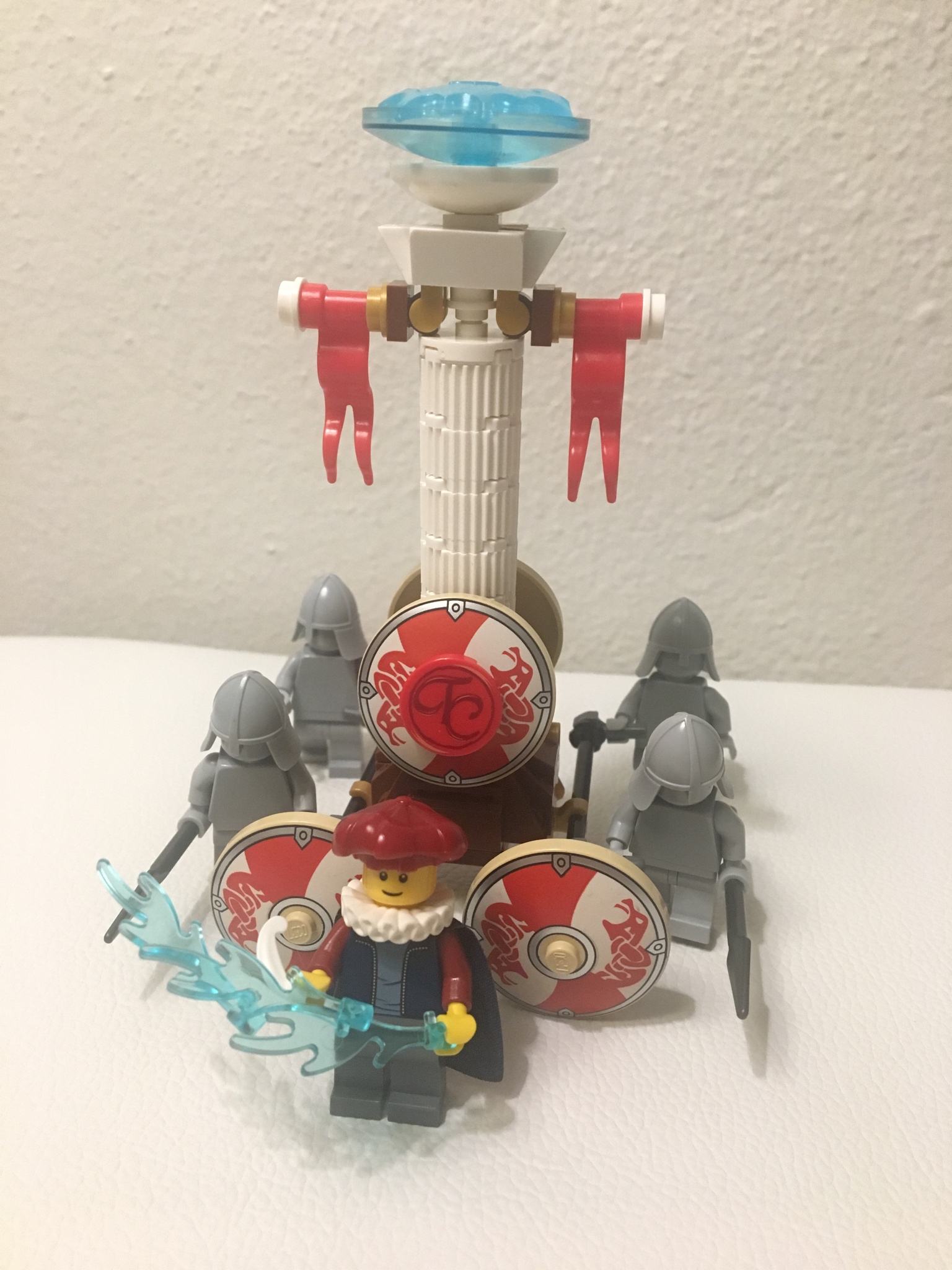 The Traveler’s Society does not often engage in all out war, preferring instead to maintain the status quo on the eastern coast of Avross through the actions of the adventuring parties in their employment. However, when conflict rises to the point when they are unable to let it continue without direct intervention, the Society musters the might of a military sub-division known as the Traveling Company to restore order. In order to aid their loremasters and adventurer spellcasters in battle, the Company employs the use of specially constructed and enchanted mana spires, which allow magik users to draw from a pool of stored magikal energy rather than on their own vitality and stamina to fuel their abilities. They are most often carried into battle on mounted poles by a quartet of standard granite pawns and accompanied by at least one Traveling Company loremaster, but can also be affixed to carts, battlefield emplacements, or alchemic sailers as well. 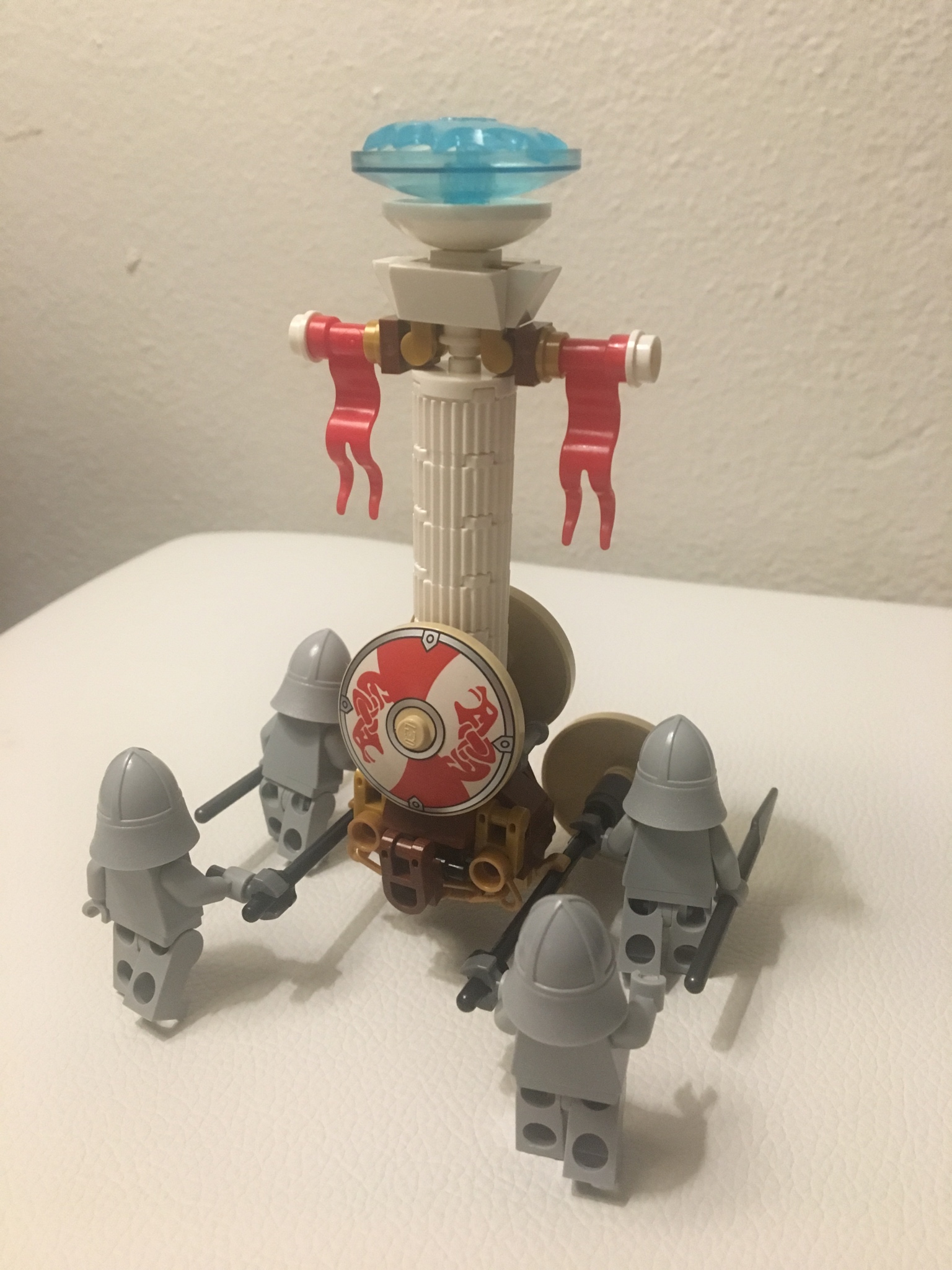 Here’s a back view of the spire and the mount on the back to be able to attach other magikal accessories.

(Disclaimer: under this section are some other shots of the spire in action, these should not be considered as part of the entry for judging purposes but rather as flavor for the unit itself.) 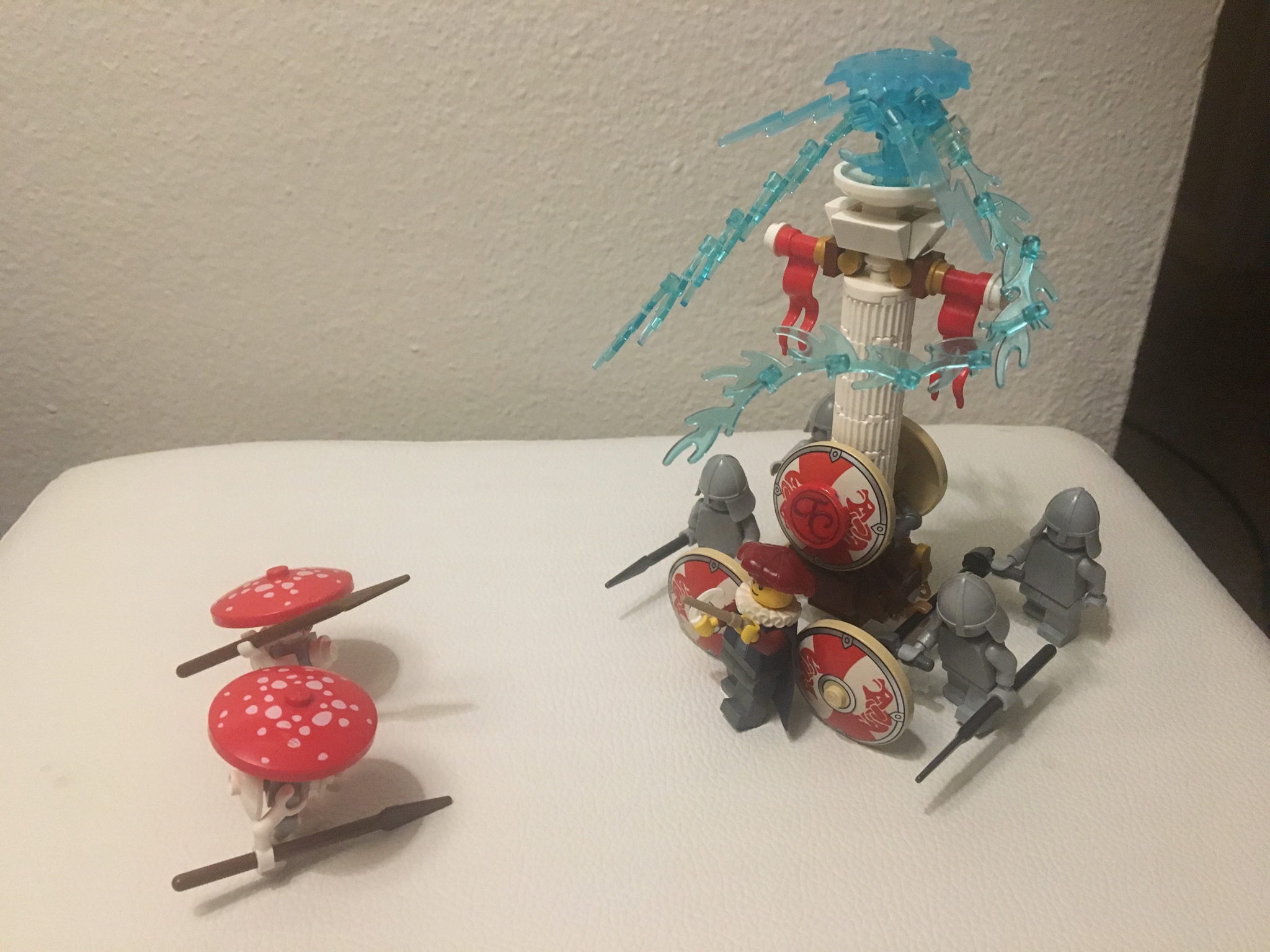 The spires have a number of utilities when deployed into conflicts besides its main purpose as a mana reservoir. They can be used as foci to create lancing tendrils of destructive energized mana like magical artillery platforms... 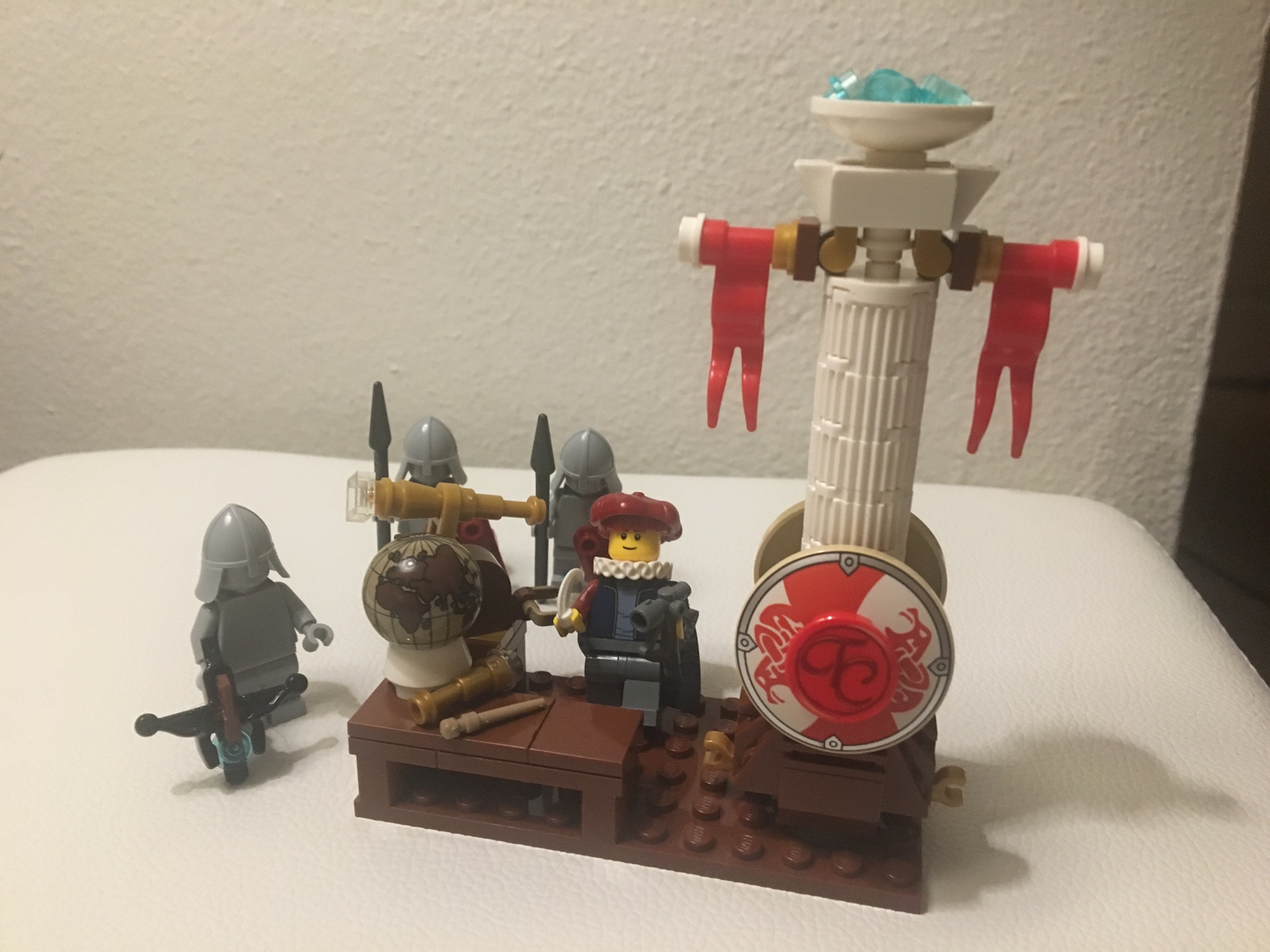 As beacons to project the effects of divination, clairvoyance, and other communication spells much greater distances... 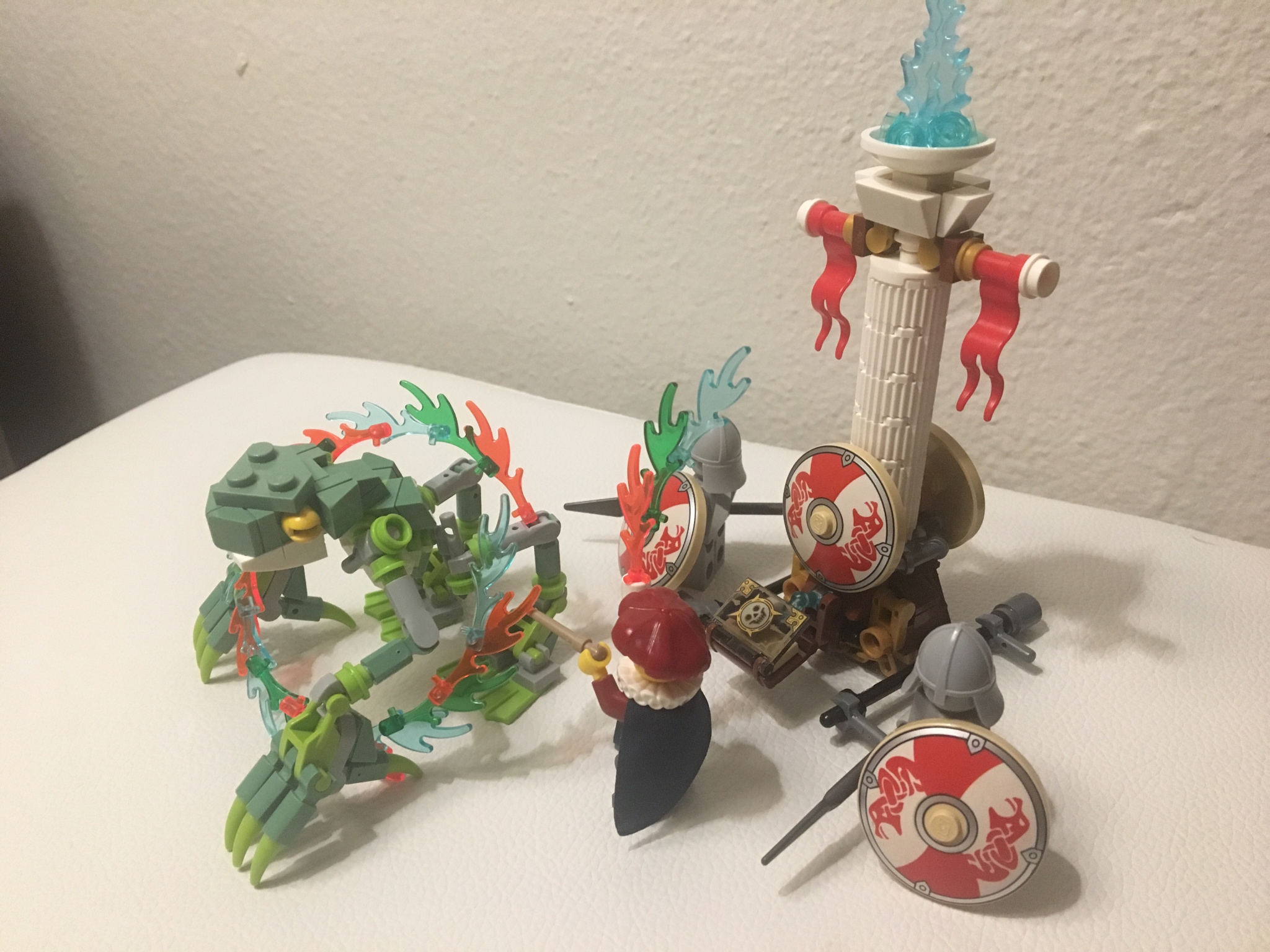 Or, when equipped with a summoning tome or teleportation scroll, as mobile rally structures to conjure allied monsters or create portal gates to call in extra troops to aid the Traveling Company in battle. 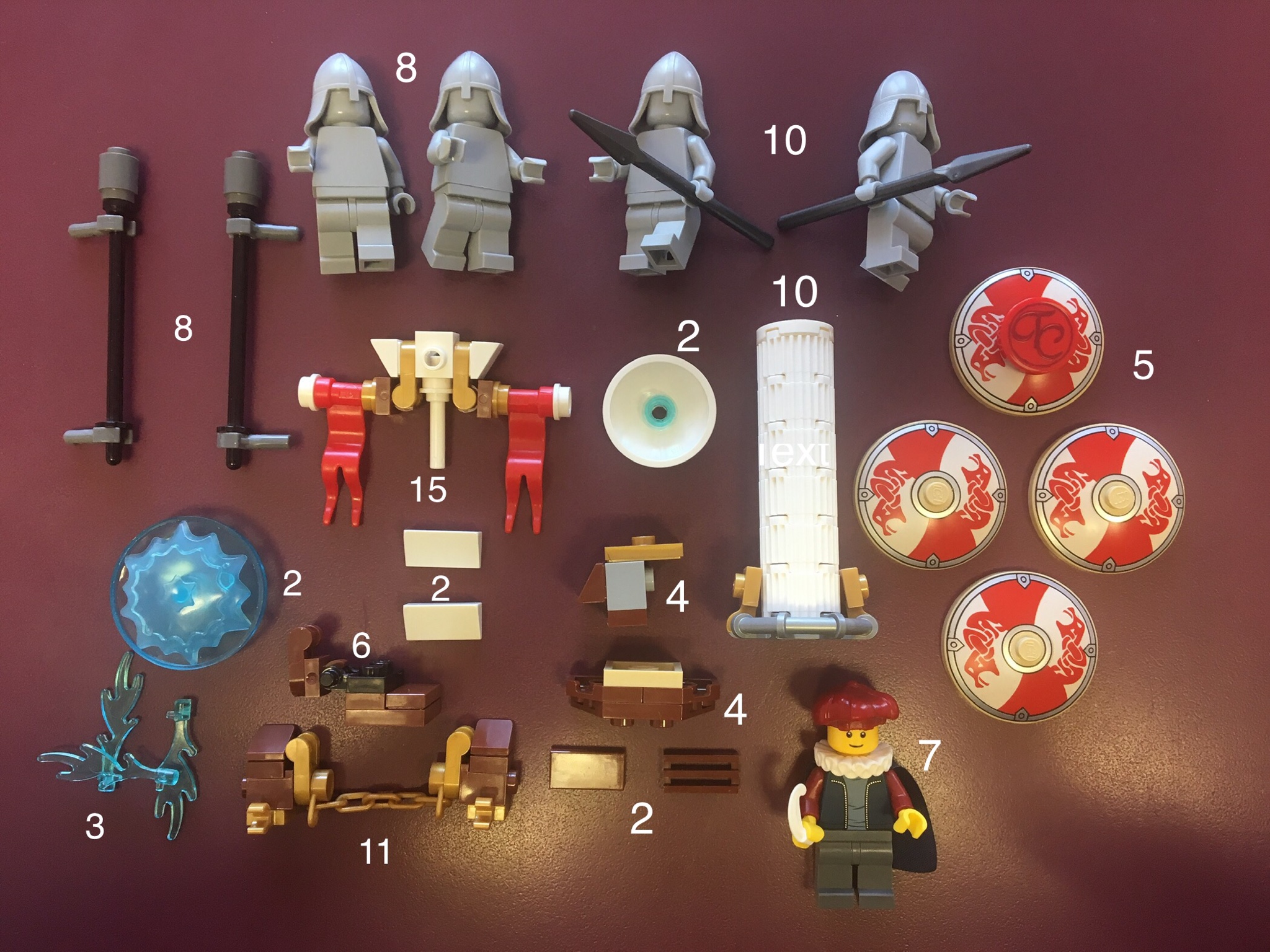 Parts breakdown, it’s 99 pieces in total because I miscounted and thought I was a part over budget so I removed a trans blue flame piece from the loremaster’s magik effect. Oh well, not much really changed so ¯\_(ツ)_/¯

That’s really cool. It reminds me of the Carroccio standard from Medieval 2 Total War.
The real Piltogg was the friends we made along the way.
Top

I definitely see the resemblance and it’s definitely similar in functionality in terms of acting as a rally point for troops. Glad you like it!

Style: 8 - not much to say here, technically flawless build

Substance: 8 - same as above. Nice details, colour scheme and scale

Theme: 9 - first also wanted to give an 8, then listened to Two Steps From Hell all the time

Style - 9 Overall, it looks good, and it would stand out nicely on a battlefield.
Substance - 8 I think the build could use more detail at the base and at the capital.
Phototgraphy - 9 It might just be me but there's a slight haze to the images. The breakdown is really nice though.
Story - 9 The music is okayyy.
I make apocalypses and apocalypse accessories.