Greetings gang, Bookwyrm here once again with another Drunken Madness entry! This time I tried something I meant to do a while ago, which is limit my parts pool for the contest since my biggest hurdle while building shitfaced is sitting on the floor boggling vacantly at a mixed pile of parts and drunkenly sifting for two that might fit together. Thus, I decided to try and make a unit with only the parts from the Mythical Creatures (31073) and Fire Dragon (31102) sets, negating the need to scrounge for compatible parts except on rare occasions when one of the above sets doesn’t have what I need. 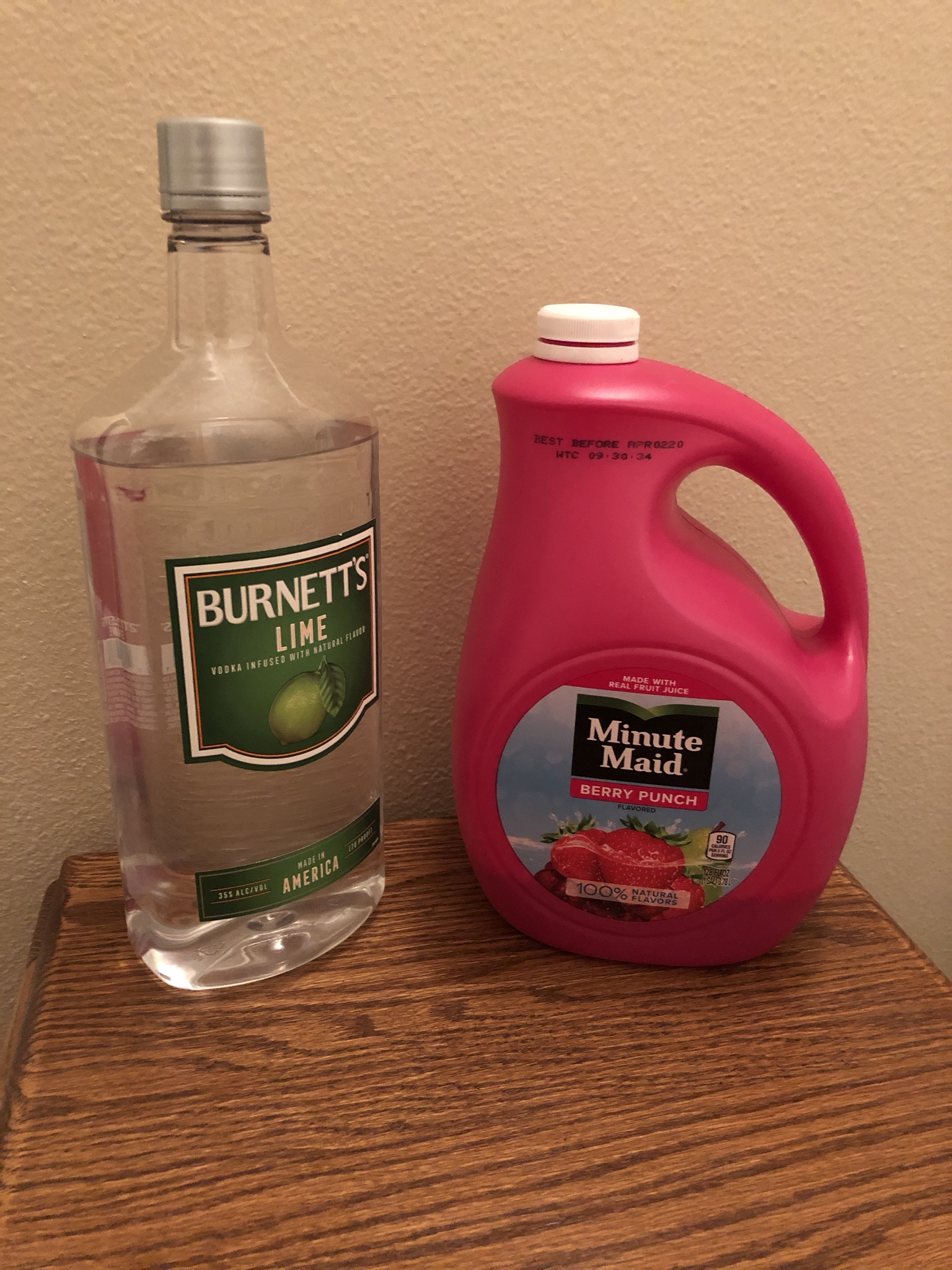 Alcohol wise, I drink so rarely that I still have an almost full bottle of Burnett’s Lime-Flavored Vodka purchased for last year’s Blarney Build, so that plus some fruit punch and a squeeze of lemon juice got me to a comfortable level of intoxication, helped along with a healthy helping of some of Colorado’s finest... er, “Longbottom Leaf,” lets say. Anyway, preamble over. On to the build! 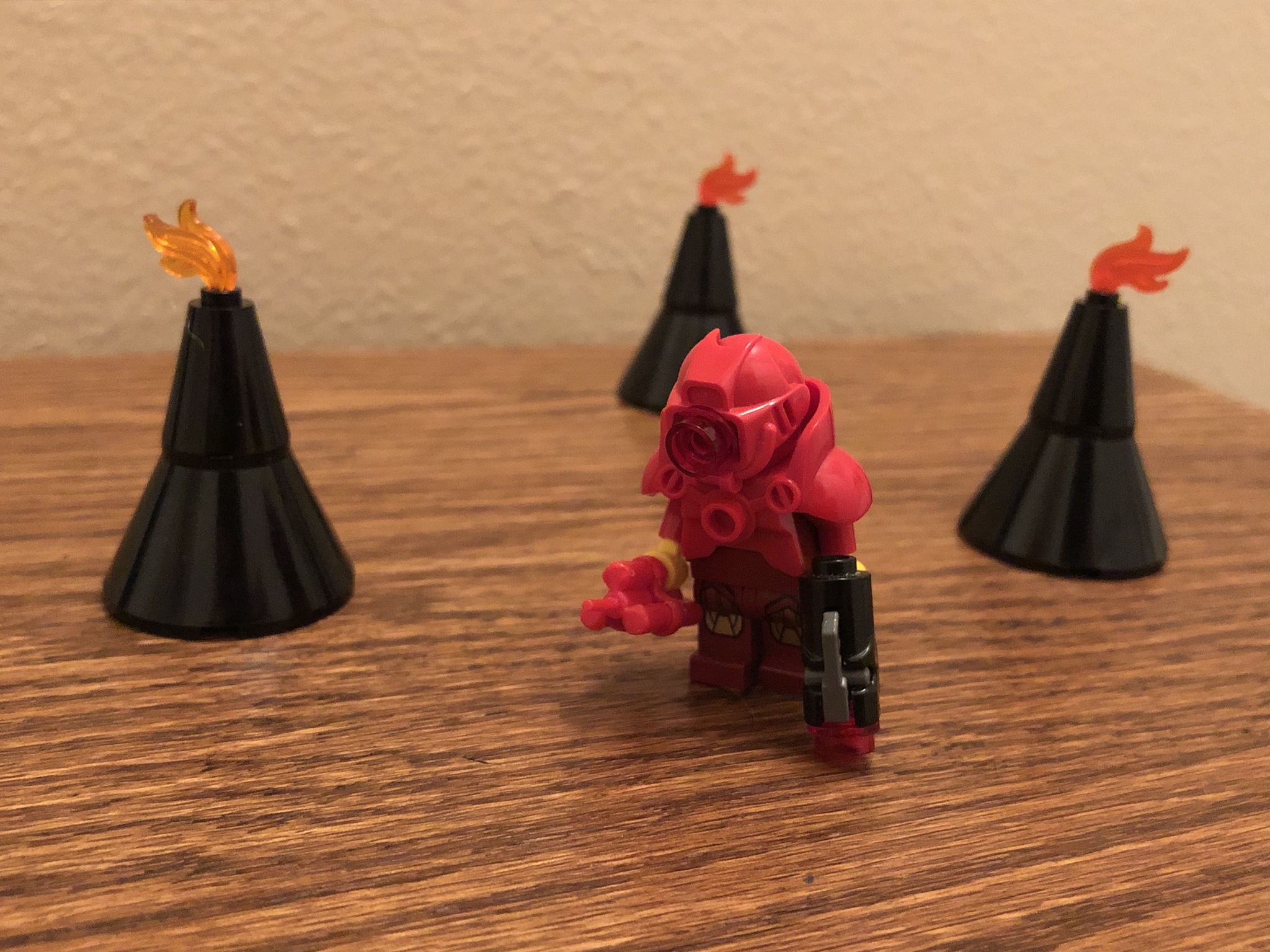 In the depths of an unfamiliar hellscape, a menacing figure clad in crimson power armor and gripping a captured incendiary 10amyte diemon in his glove scans the burning environment for something to pulverize. He is the Boomslayer, wielder of great explosions and sick heavy metal riffs, and he has no idea where the fuck he is. 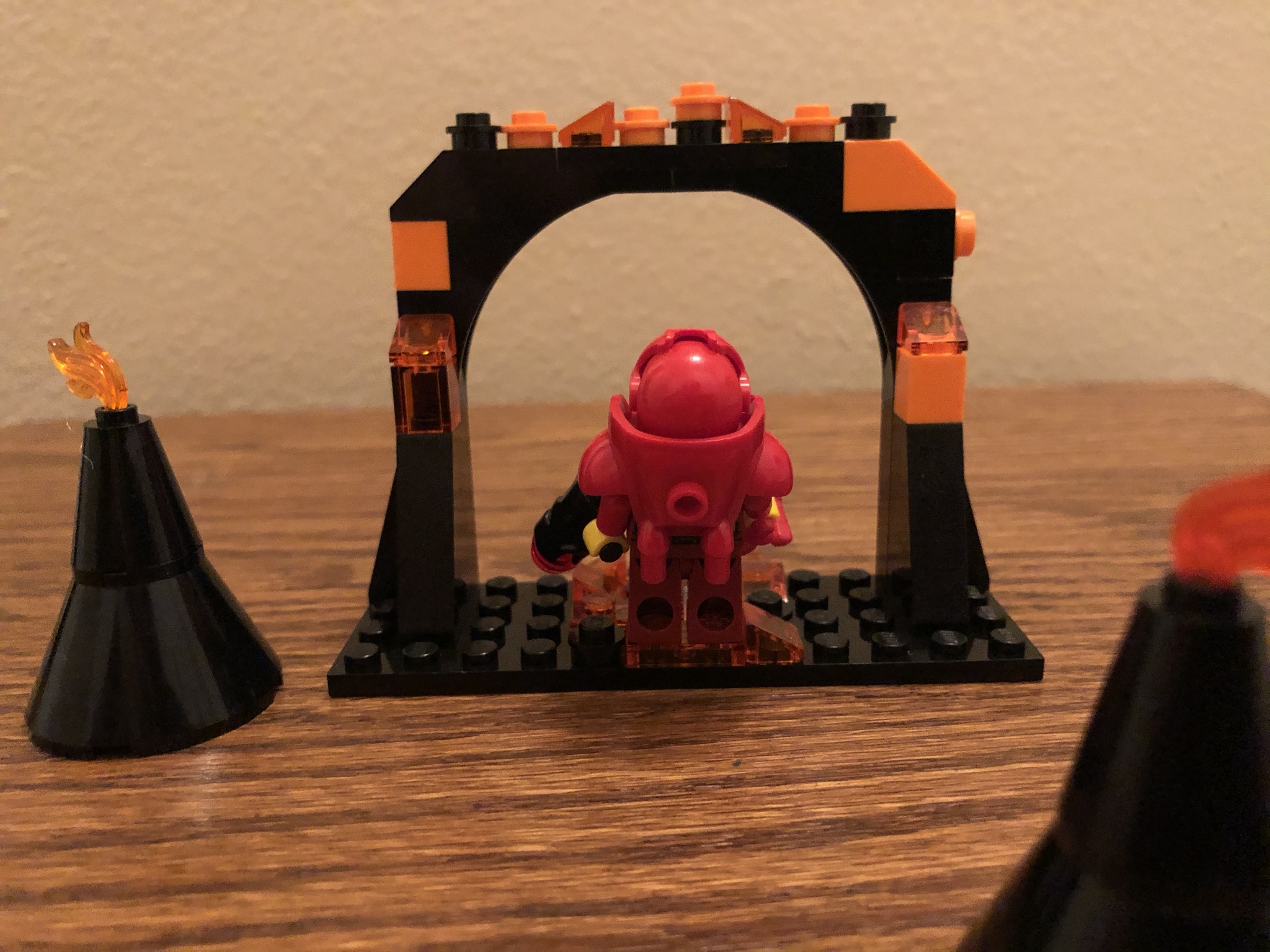 Our friend the Boomslayer was on a fiery pub-crawl for the yearly retkonstruktion festivities, visiting everywhere from Brikhell to the Circles of Hellius and Literal Hell, just doing what he loves best; beating the living hell (heh heh) out of every demon, devil, and miscellaneous fiend within reach. But when Ragnablok hit its crescendo during the Konvergence and the universe broke into sphincters, the Boomslayer found himself in this unfamiliar purgatory, and so far, he has found this new realm lacking in terms of overall demon quantity. Sure, there were a couple of those minor demonic creatures and that weird fucking rat made out of ink he put down a few days ago, but besides that, so far the pickings have been slim. But that’s all about to change. The Slayer approaches the mouth of what can only be a powerful demon’s lair, itching for a good fight. Spurts of flame from the tips of stalagmites and stalactites provide the only illumination within the depths of the cave, merely giving glimpses of the surrounding walls of volcanic stone. And then... 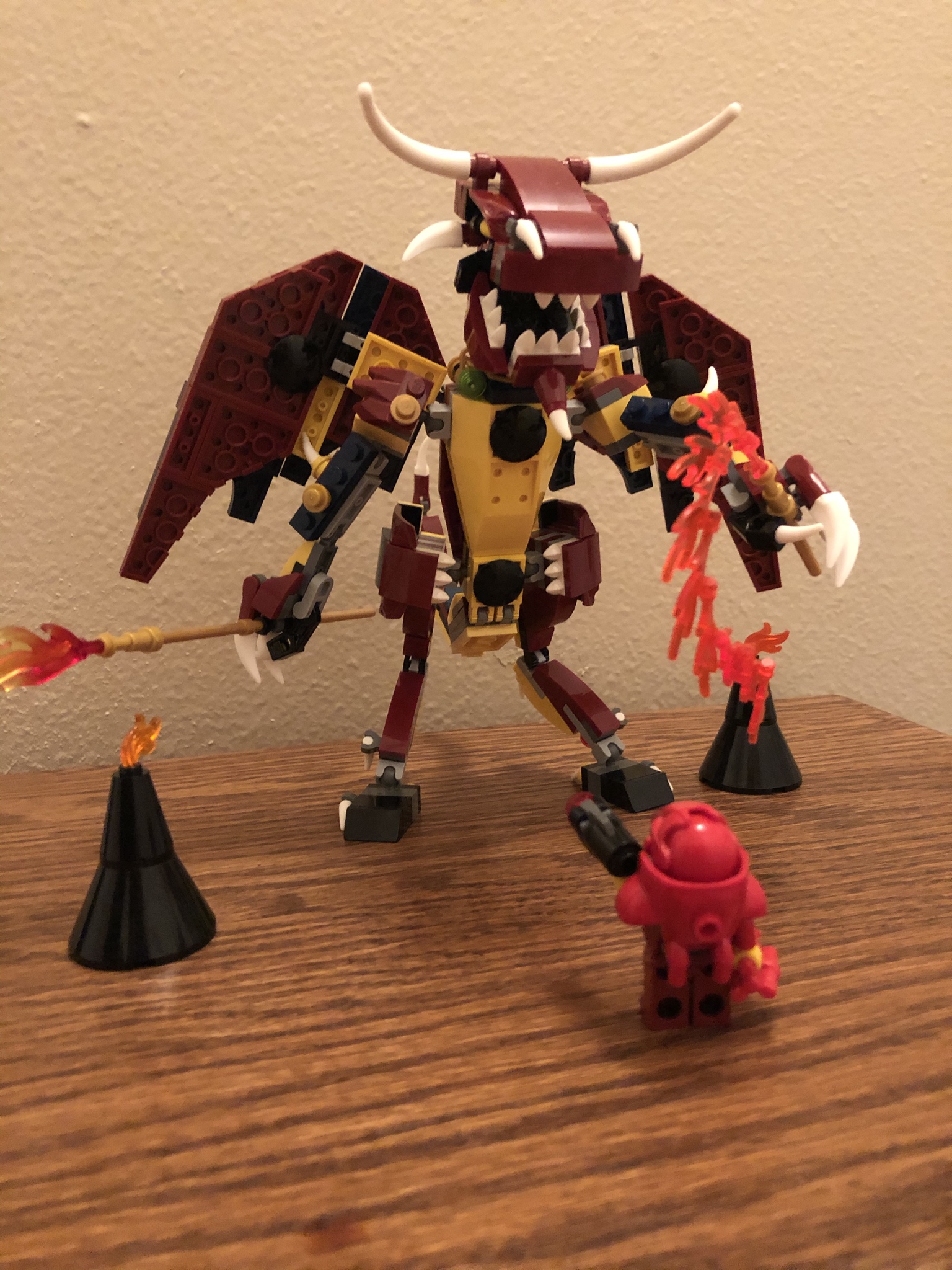 “WHO DARES TO DISTURB THE SLUMBER OF AN INFERNO BARON?” 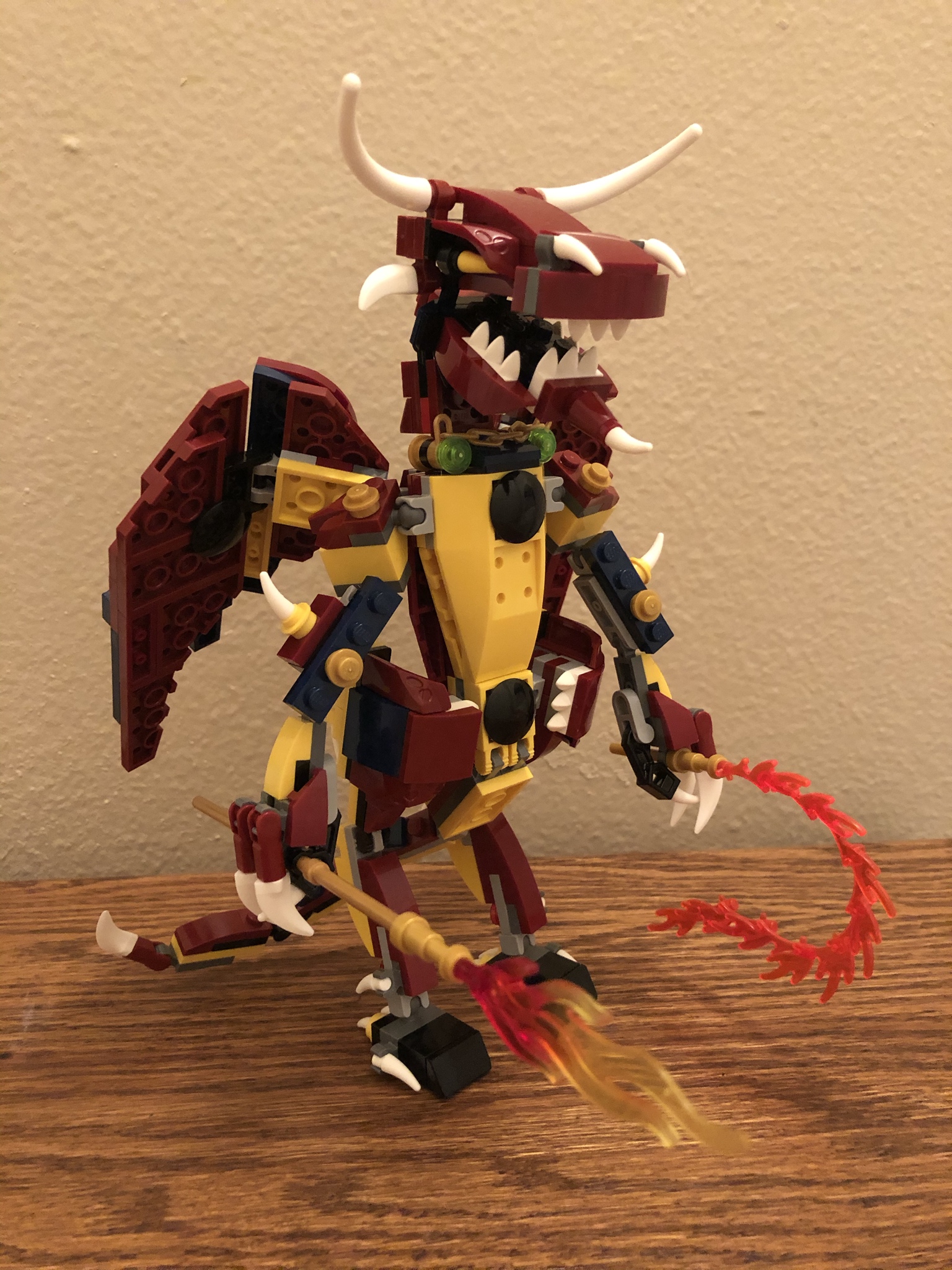 The Inferno Baron is the most powerful kind of demon native to Axeleron’s Infernal Realm, surpassed in power and cunning only by full Demon Lords. Towering over their underlings, Inferno Barons are the rulers of infernal territories, claiming and governing land both in the service of Demon Lords and also in their own names as well. They are the pinnacle of Infernal perfection, killing machines capable of laying waste to entire armies singlehandedly, and of commanding even larger armies of lesser demons through sheer force of their presence. Flaming glaives and scourges are their weapons of choice, allowing them even greater reach to inflict pain and punishment on both allies and enemies. 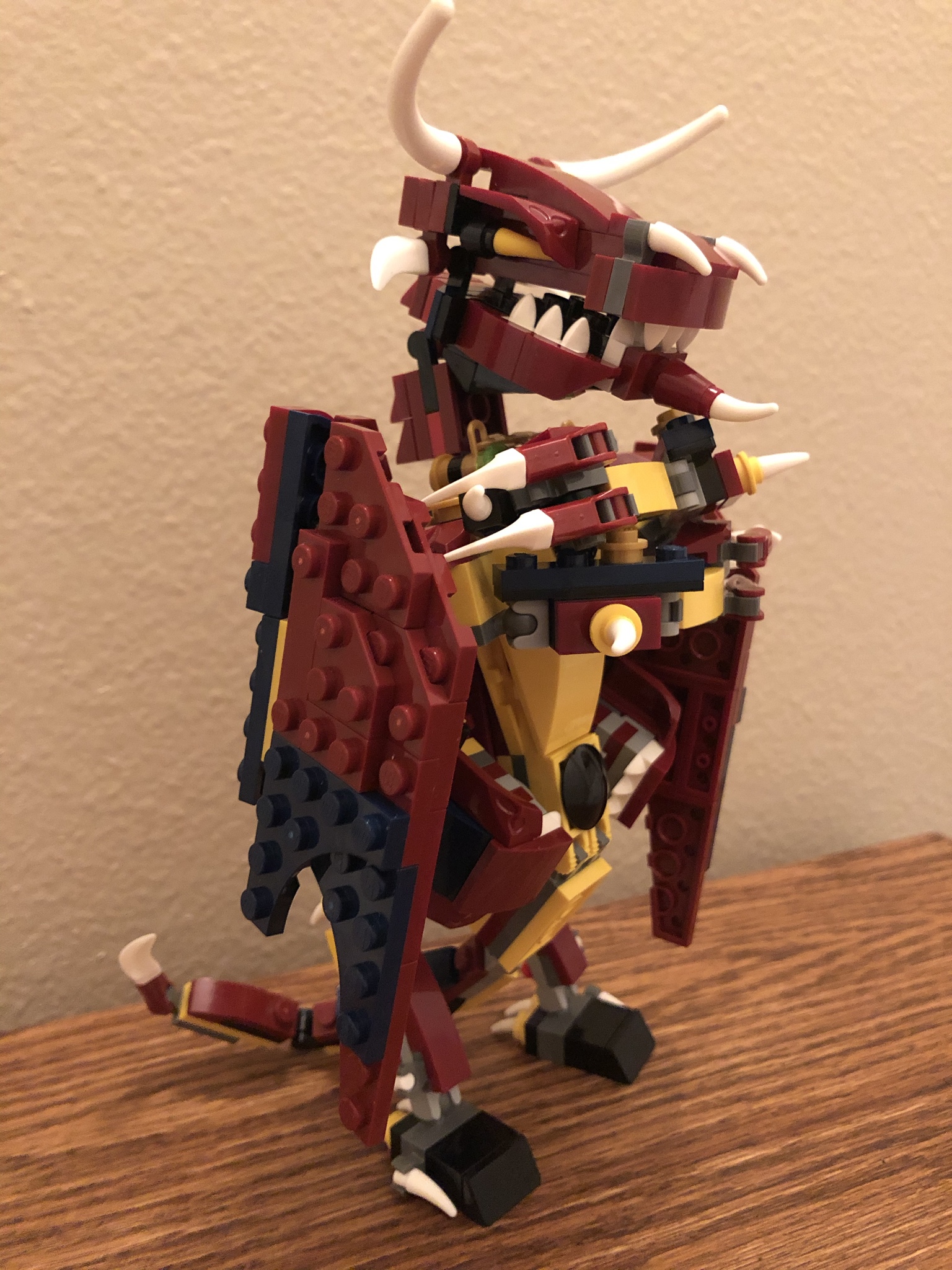 Infernal Barons are prideful and almost rightly so, for they are amongst the most powerful of monsters that can be encountered on Axeleron. Very few creatures can stand against the fury of one of these bloodthirsty butchers for more than a few minutes at best, and even fewer have hopes of harming the creature. Weapons of Celestial origin can pierce its nigh-impenetrable skin, but unless the wielder has a significant level of skill, this usually serves little more than to attract the Baron’s ire over the rest of your companions. They are often spellcasters as well, brandishing all manner of Infernal Loremasteries. These are not creatures to be trifled with. 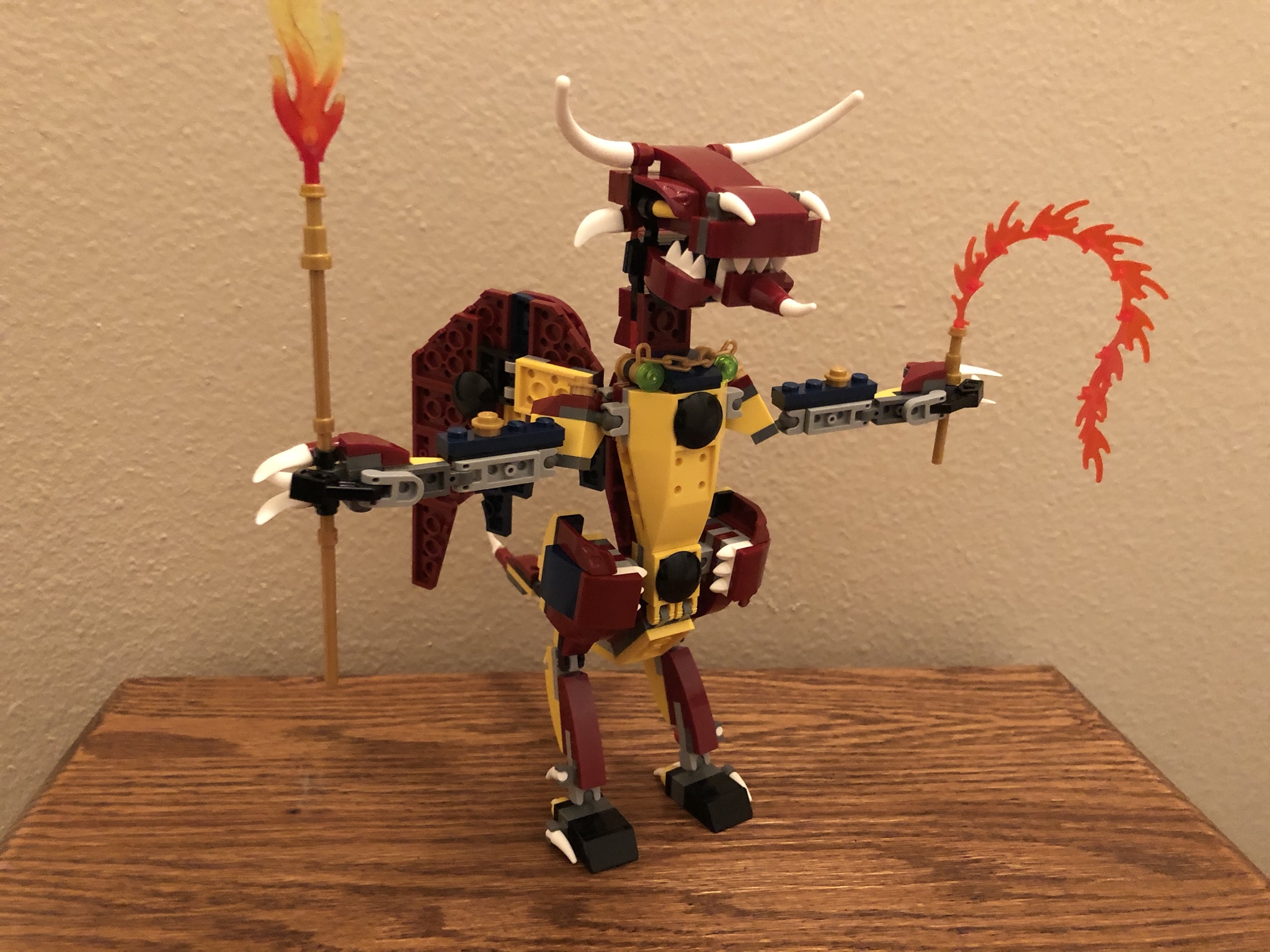 A shot of the Baron T-Posing so y’all can get a better look at the individual limbs and torso. 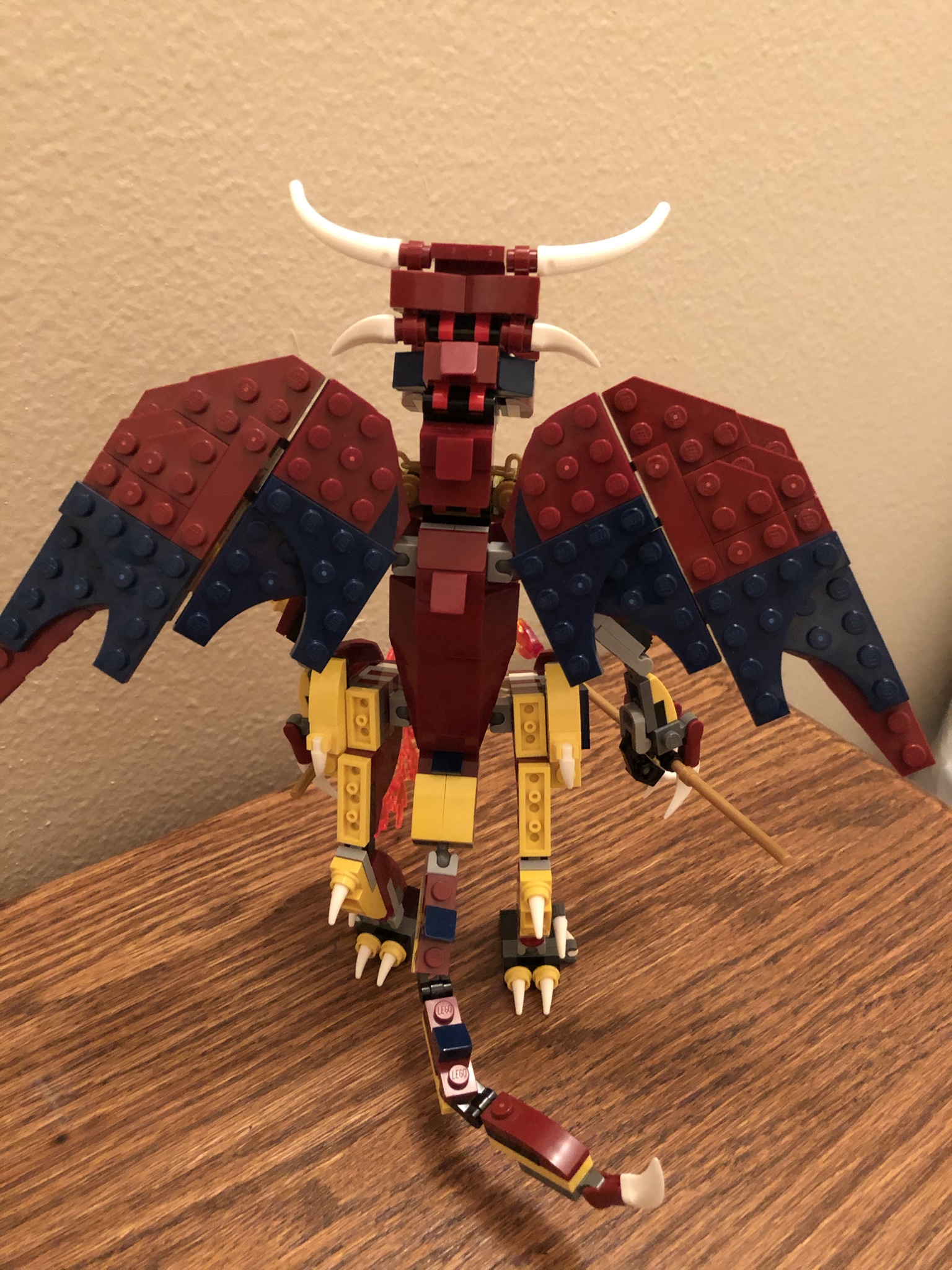 One from the back to show off the detailing there as well as the wings. 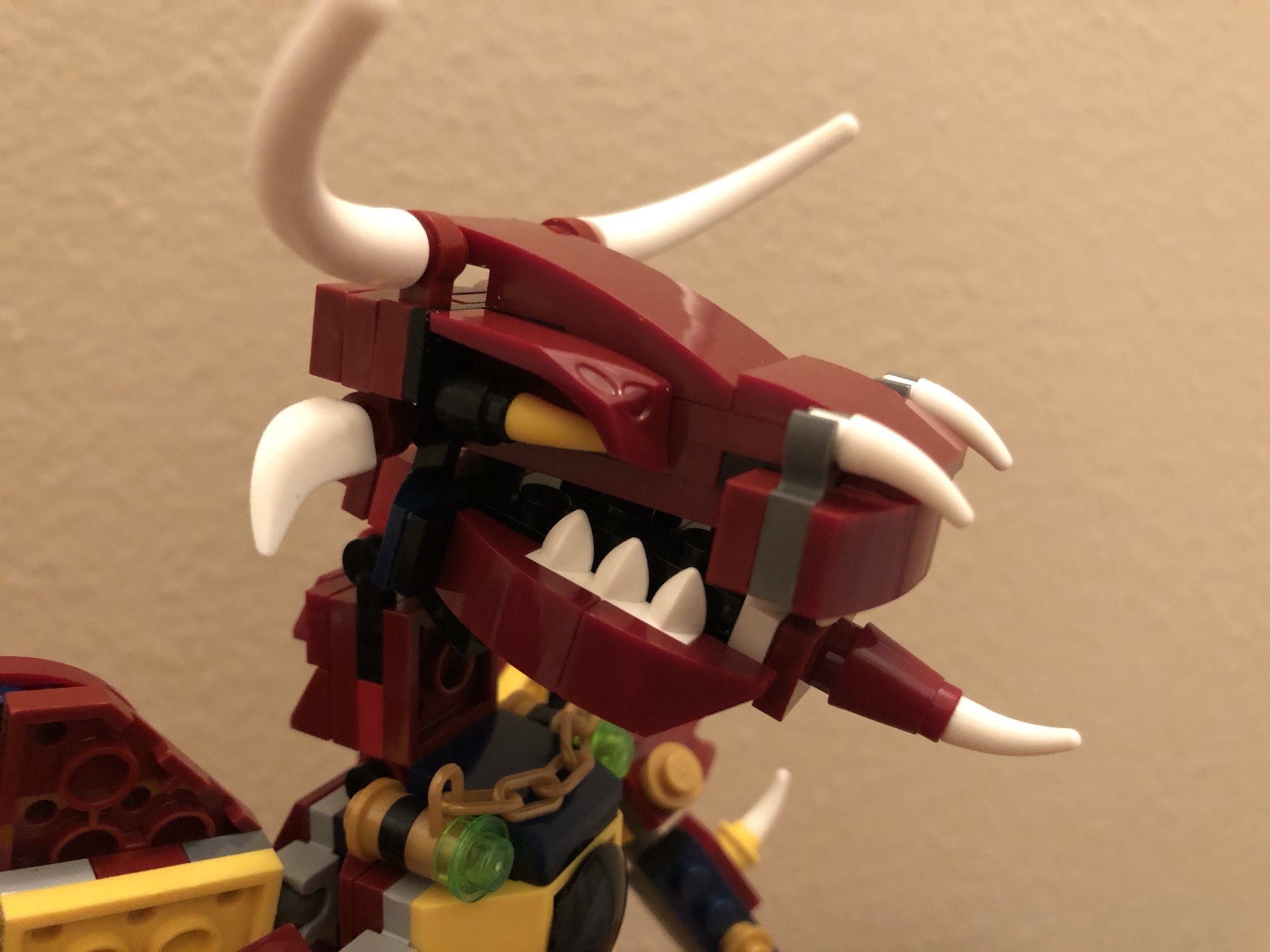 A closeup of the Baron’s ugly mug as well as the choker jeweled neck chain that normally would hold a cloak, but this guy just wears it because he thinks it makes him look richer. Go figure. 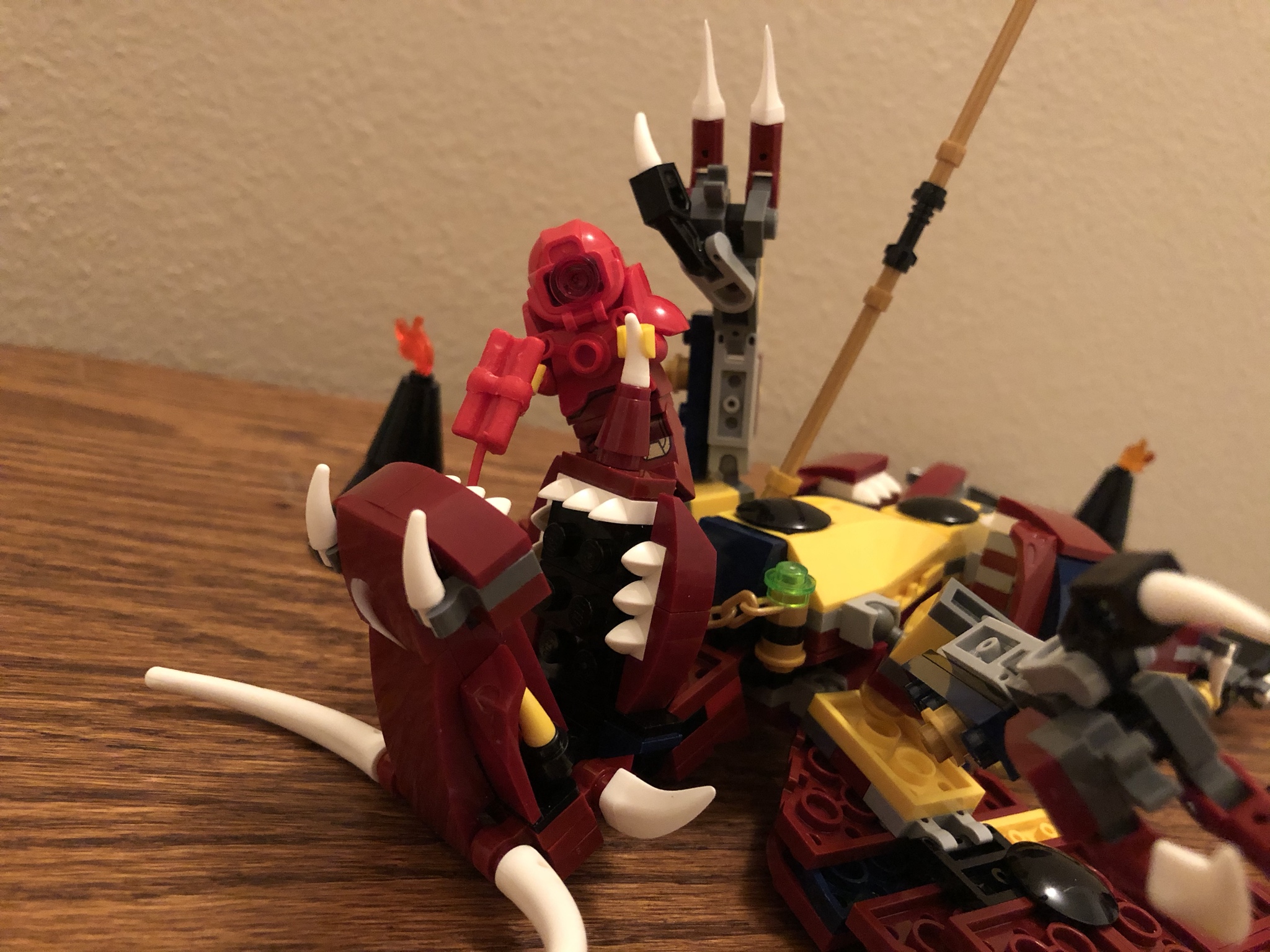 As we leave our hero, it would seem that despite the immense strength of the Inferno Baron, it is still no match for the sheer determination and desire for carnage that the Boomslayer exhibits. Looks like things are about to get rated M for Murderize, better cut away before we get censored by LEGO for excessive violence, but remember to support the fight against YOUR local Hell-Dimension, by purchasing BOOM: Everlasting, out starting today, for all your Kanona quarantine needs!


(Speaking of quarantine, it’s looking highly likely that my city is going to end up in lockdown like several others are already, so if that happens, I’ll be able to follow through on the biggest Blarney Build Boast I’ve ever undertaken; that I’m going to catch up on my armory posts and put up pictures for EVERYTHING I currently have built. It’s been so long and I have such a backlog I never thought it would get done at once, but hey, when life gives you the apocalypse, make time to update your projects you wouldn’t otherwise have had time for. At least I think that’s how the saying goes.)
Last edited by Bookwyrm on Sun Apr 19, 2020 2:08 pm, edited 1 time in total.

>TFW someone mentions your BrikWars disease in their post

If getting drunk inspires you to make awesome things like this DOOM pastiche, then I'm voting that we get you completely liver-threateningly plastered during the quarantine.
Not satisfied until the opponent is in the corner crying and asking what the hell is going on. Victory isn't necessary.
Top

Ossum build and fantastic story to accompany it!
Bleak Company! COMING SOON TO A PLANET NEAR YOU!!

Substance: 8 - Very detailed, and moveable, and awesome colour scheme. I like much.

Boast: 10 -If the detailed lore did´nt get me already, the recommended listening surely gave me the rest.
Compendium of my works

STYLE [ 10 ]
It's an excellent tribute to DOOM with an appropriate-looking DOOM Guy, the fire-spewing black structures are a nice background detail and the Inferno Baron looked badass right before he got butchered. The story added to it just complete the whole thing, including the background lore of the Inferno Baron and the little "Get your copy today!" spiel at the end.
The Kanona reference definitely brought a dumb grin to my face as well.

SUBSTANCE [ 10 ]
The stud serving as visor for BOOM Guy fits the DOOM vibe well, the hellscape looks appropriately hellish with the use of black and orange but the Inferno Baron is the real shining star here. Fire whip, chain accessory, spikes and horns that complement the red/yellow color scheme, nice posing ability too.

PHOTOGRAPHY [ 9 ]
I'm starting to feel like a part breakdown is something no one really likes to do, I know I felt insane attempting mine. The shots themselves are pretty clear, and plenty.

BOAST [ 2 ]
One for the really courageous boast, and one for a drink that includes something resembling a flask of scented fabric softener.
Not satisfied until the opponent is in the corner crying and asking what the hell is going on. Victory isn't necessary.
Top

The build is pretty cool, I like the demon/dragon idea
Substance - 10

The Fire whip wins this over for me
"You!! Shall not!! Pass!!
Photography - 8

At least you have a boast
Yeah, you know who I am