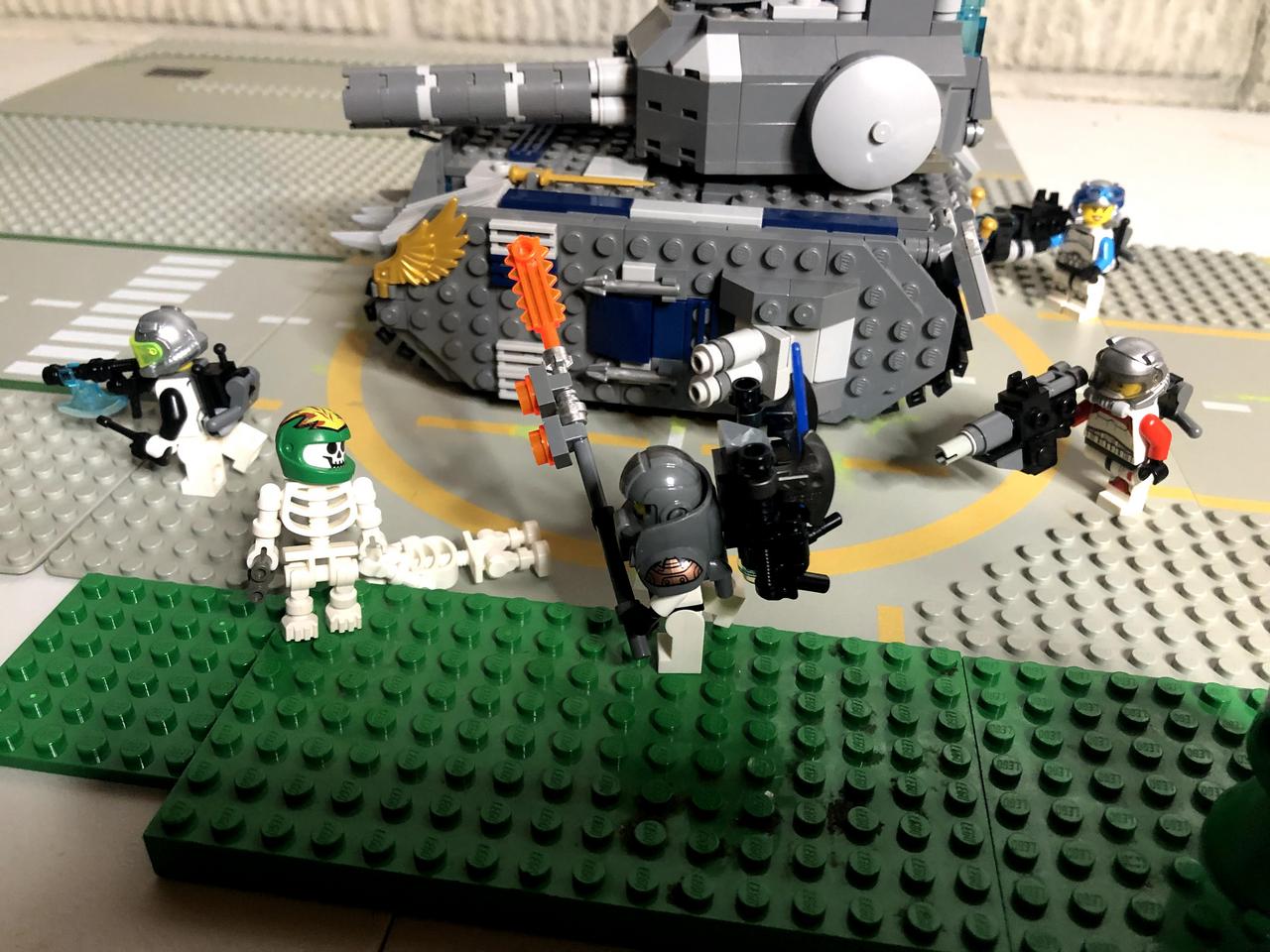 Dienekes charges a skeleton infantryman, the remnants of a dying society unwilling to move on. His OTC staff revs with fury, always ready to dice another foe. 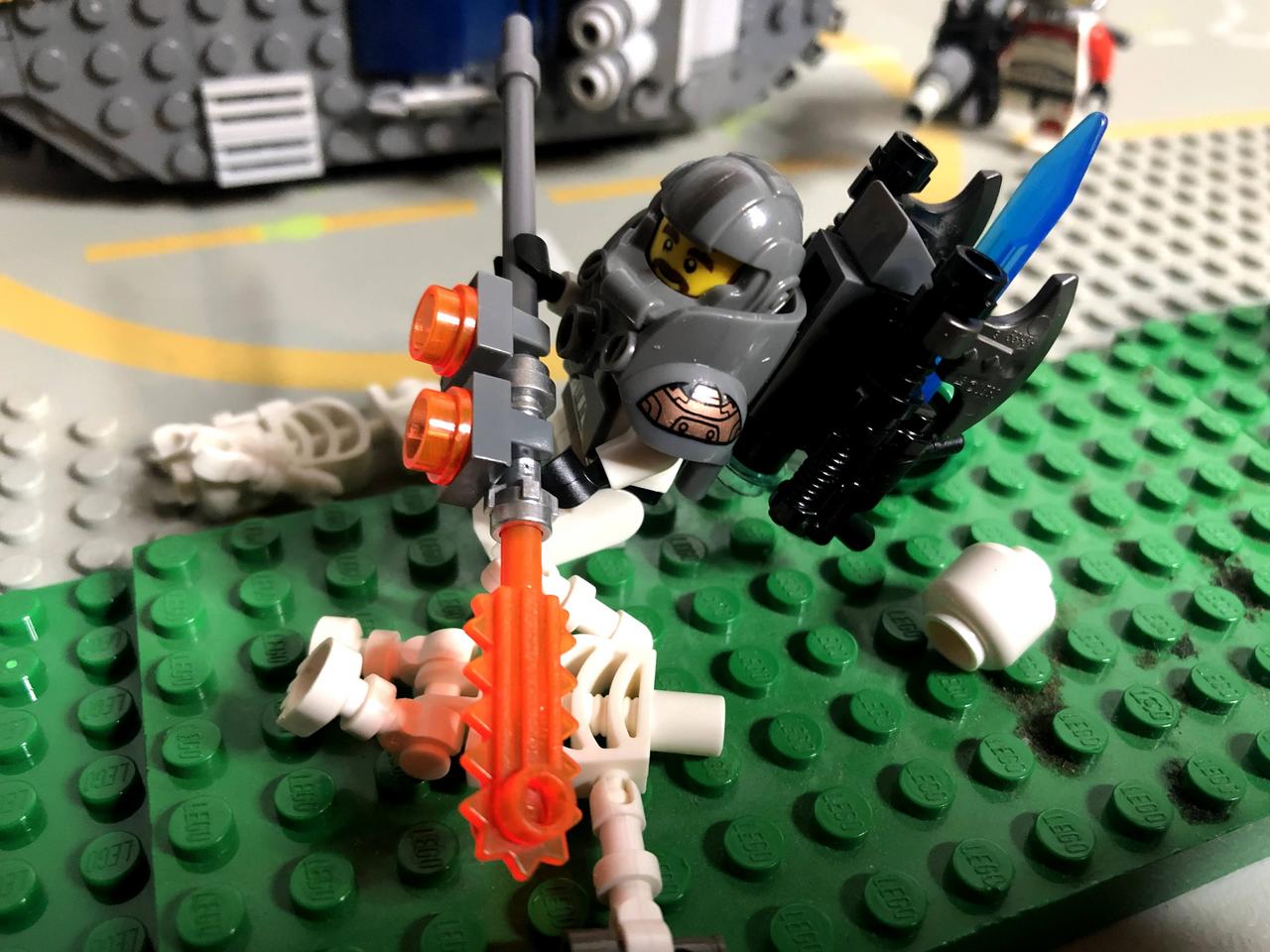 "I will give you death once again," Dienekes shouts as the skull rolls through the dust out of it's helmet. 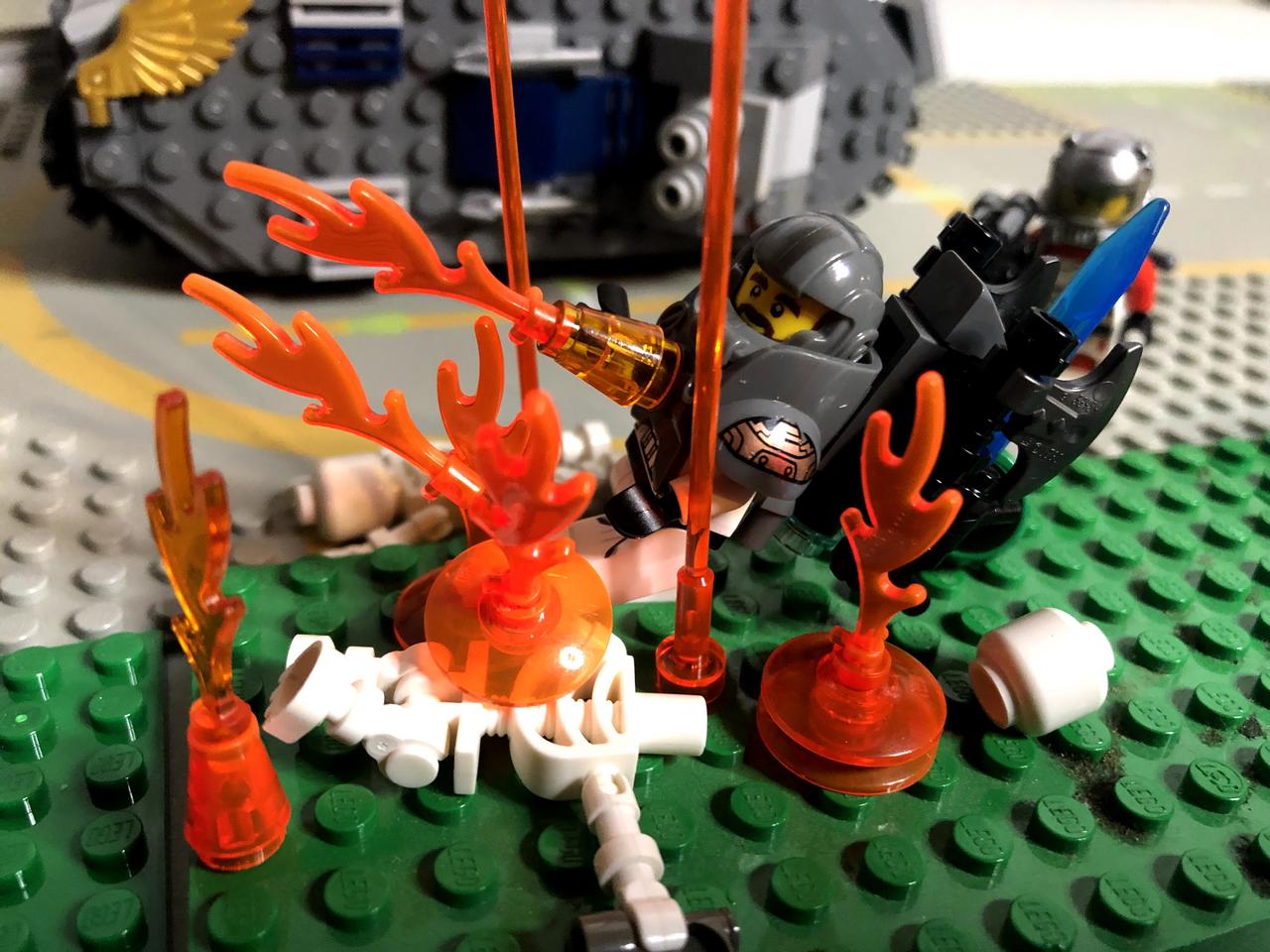 Dienekes takes a direct shot from nearby artillery firing in response. He is unwounded, but... 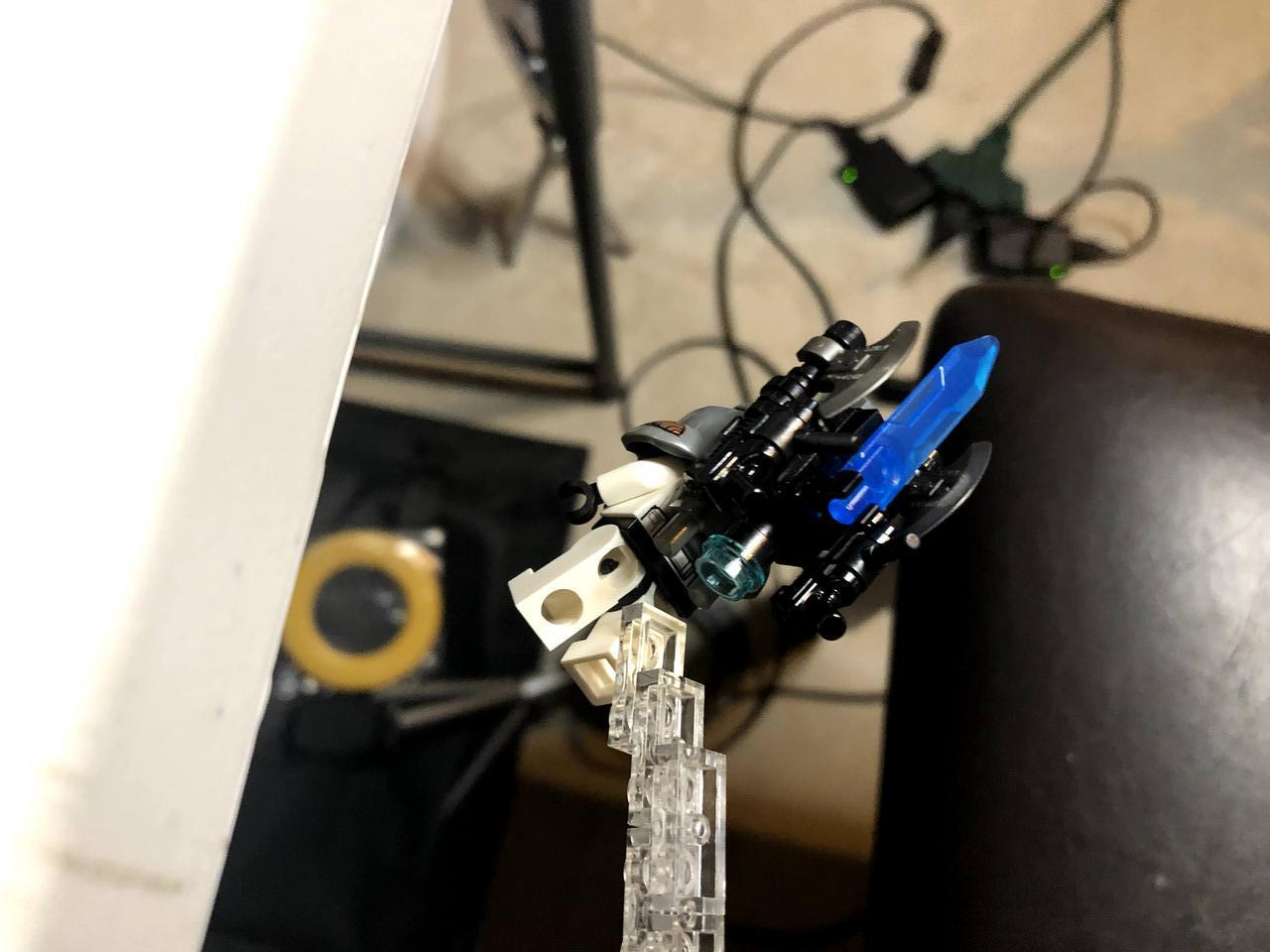 The knockback rolls several critswhich causes Dienekes tofall down from the battlefield to... 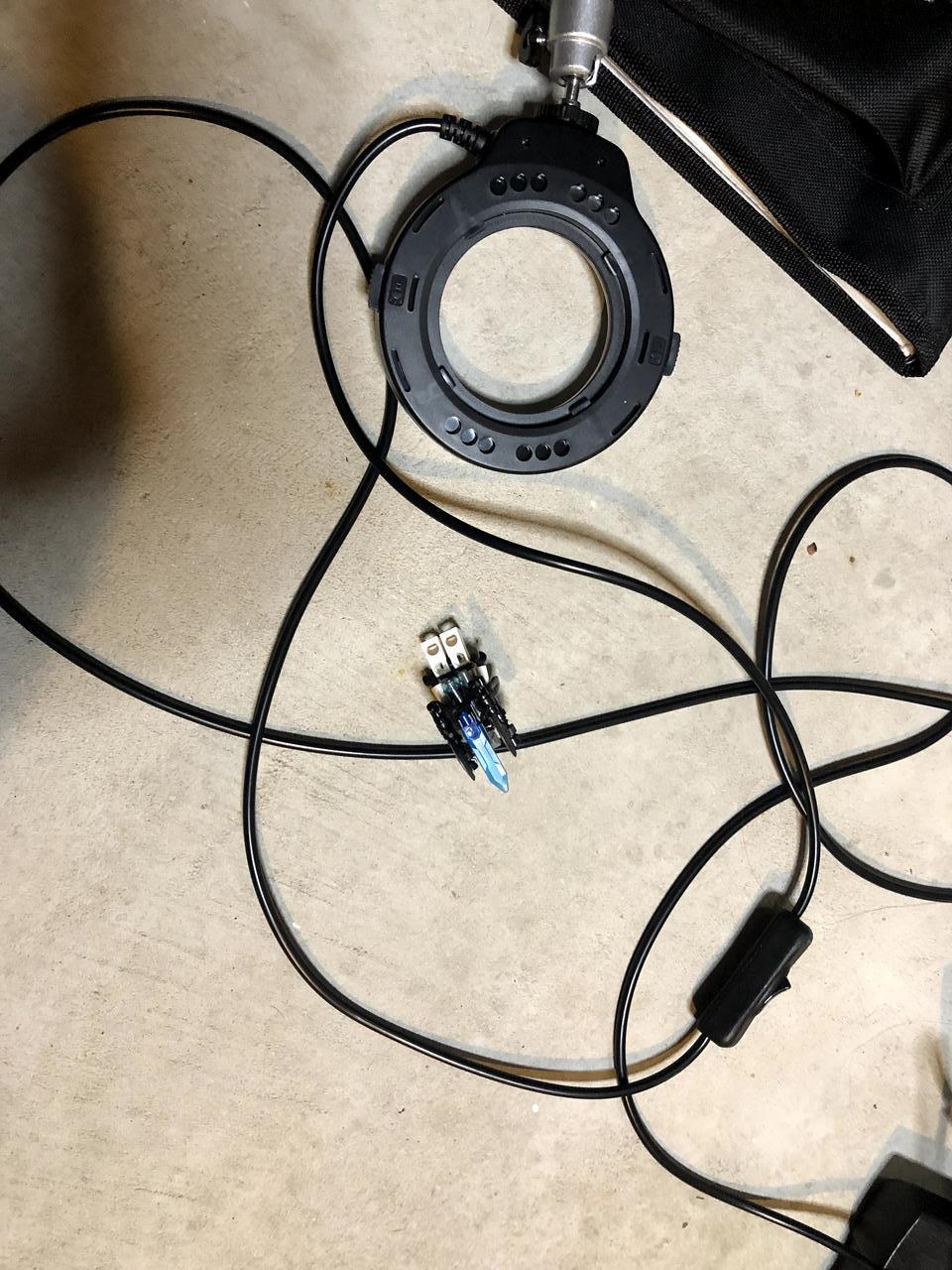 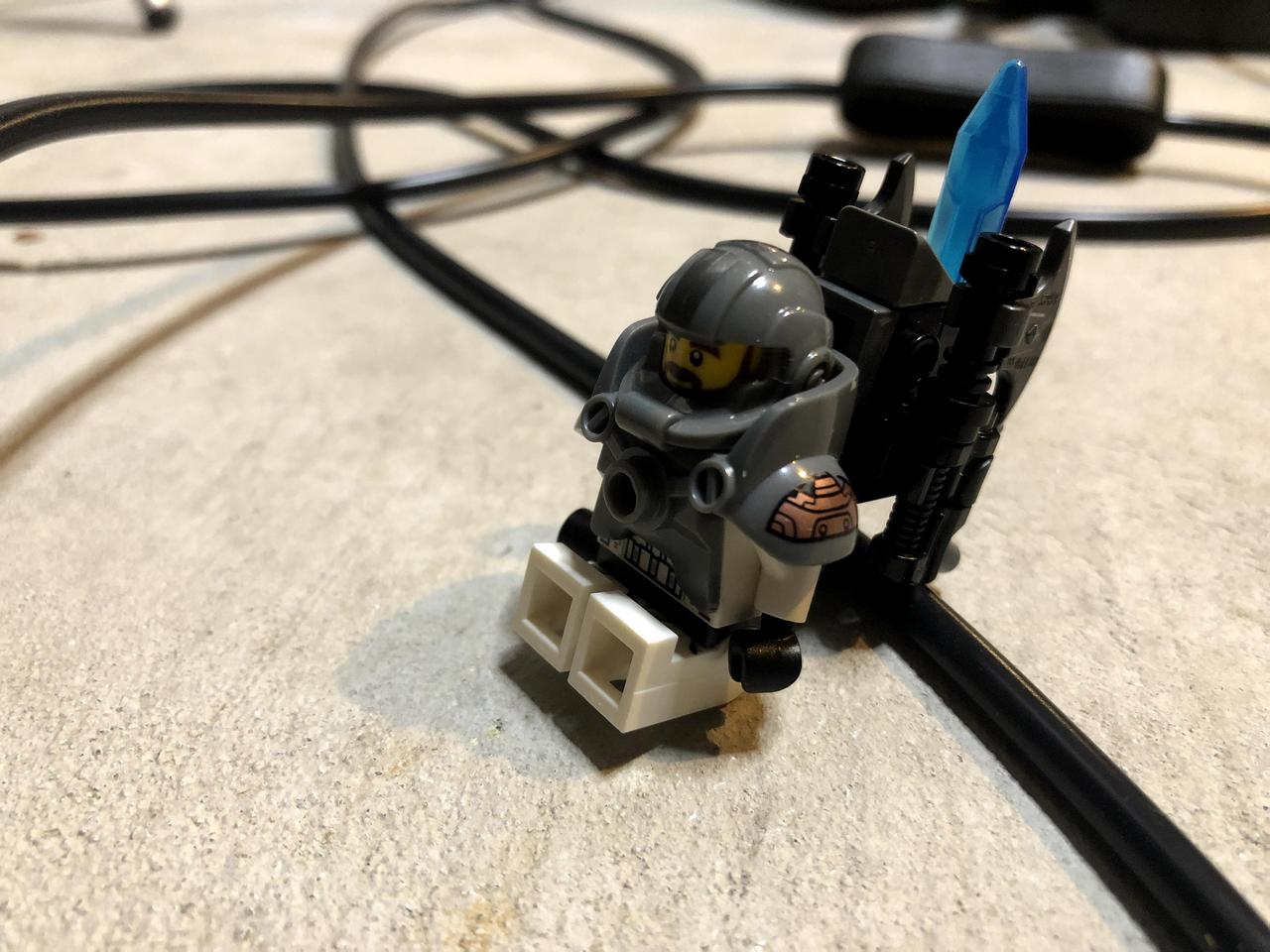 "Hello?" Dienekes asks, sitting up in an unfamiliar place. 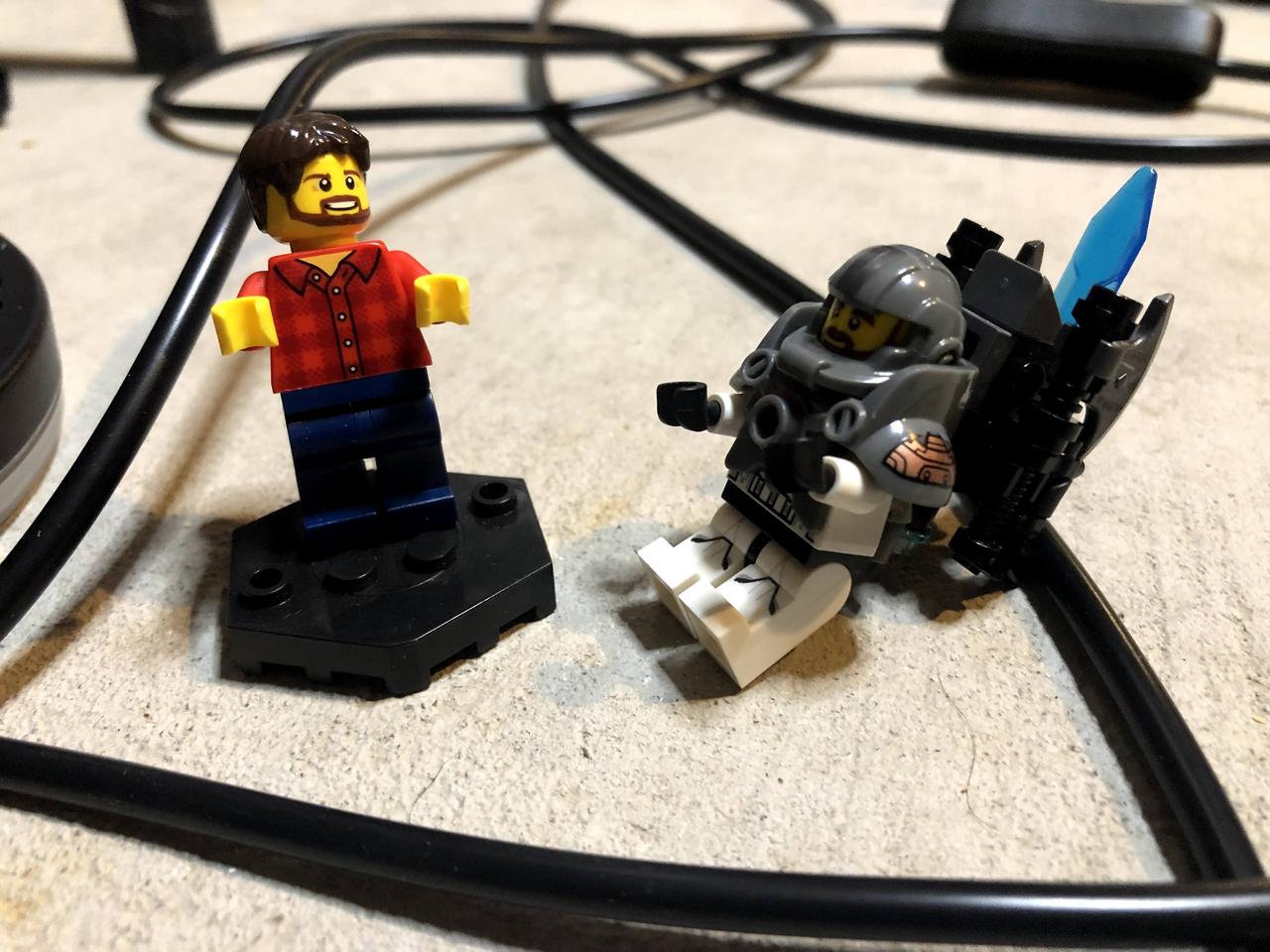 "Hello!" comes a response, a crack of displaced air echoing in the foreboding dark as a mysterious figure appears directly in front of the great Skion Hero. 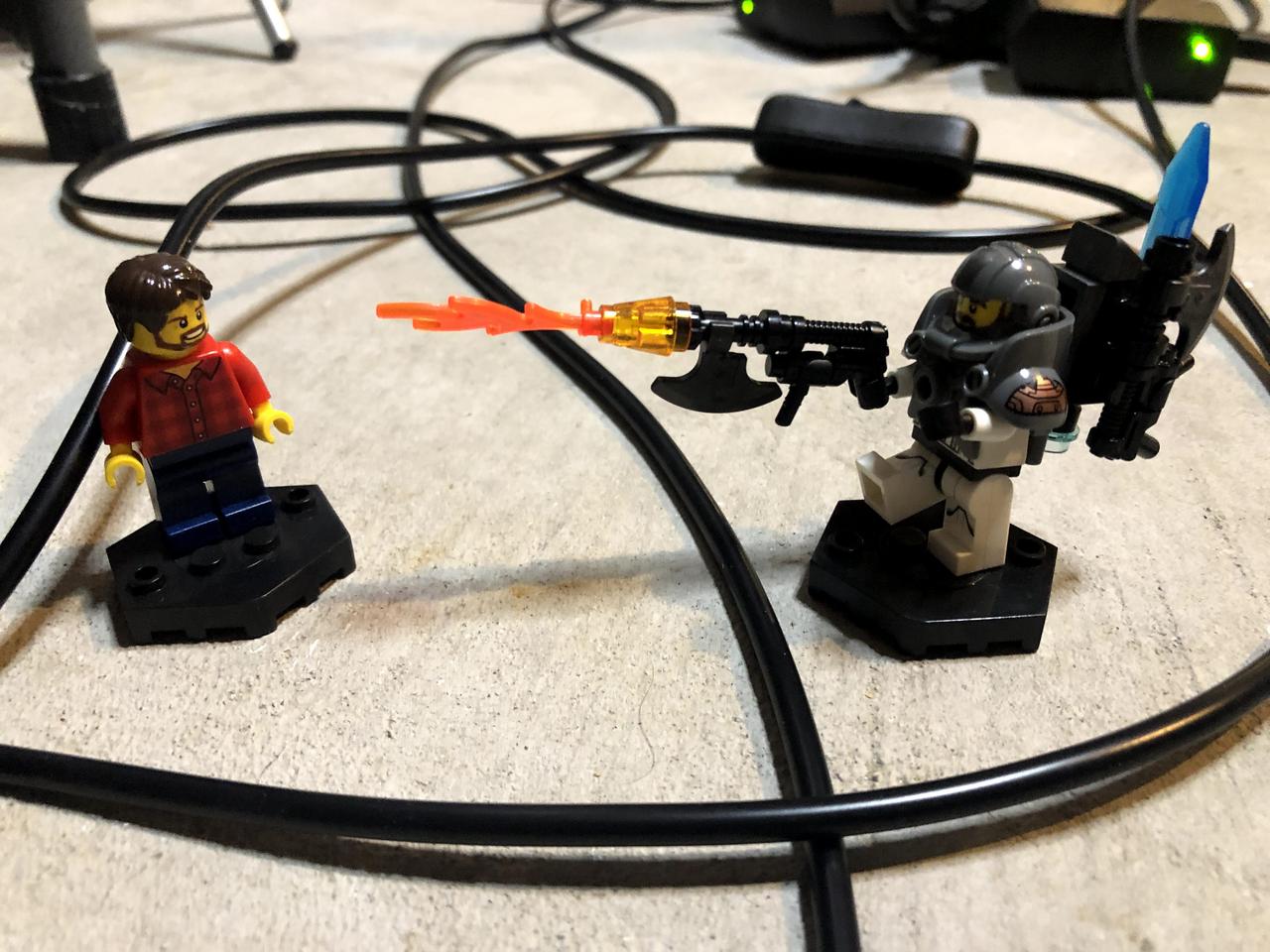 Dienekes jumps to his feet and fires, round after round evaporating against the mystery man's fashionable plastic shirt. 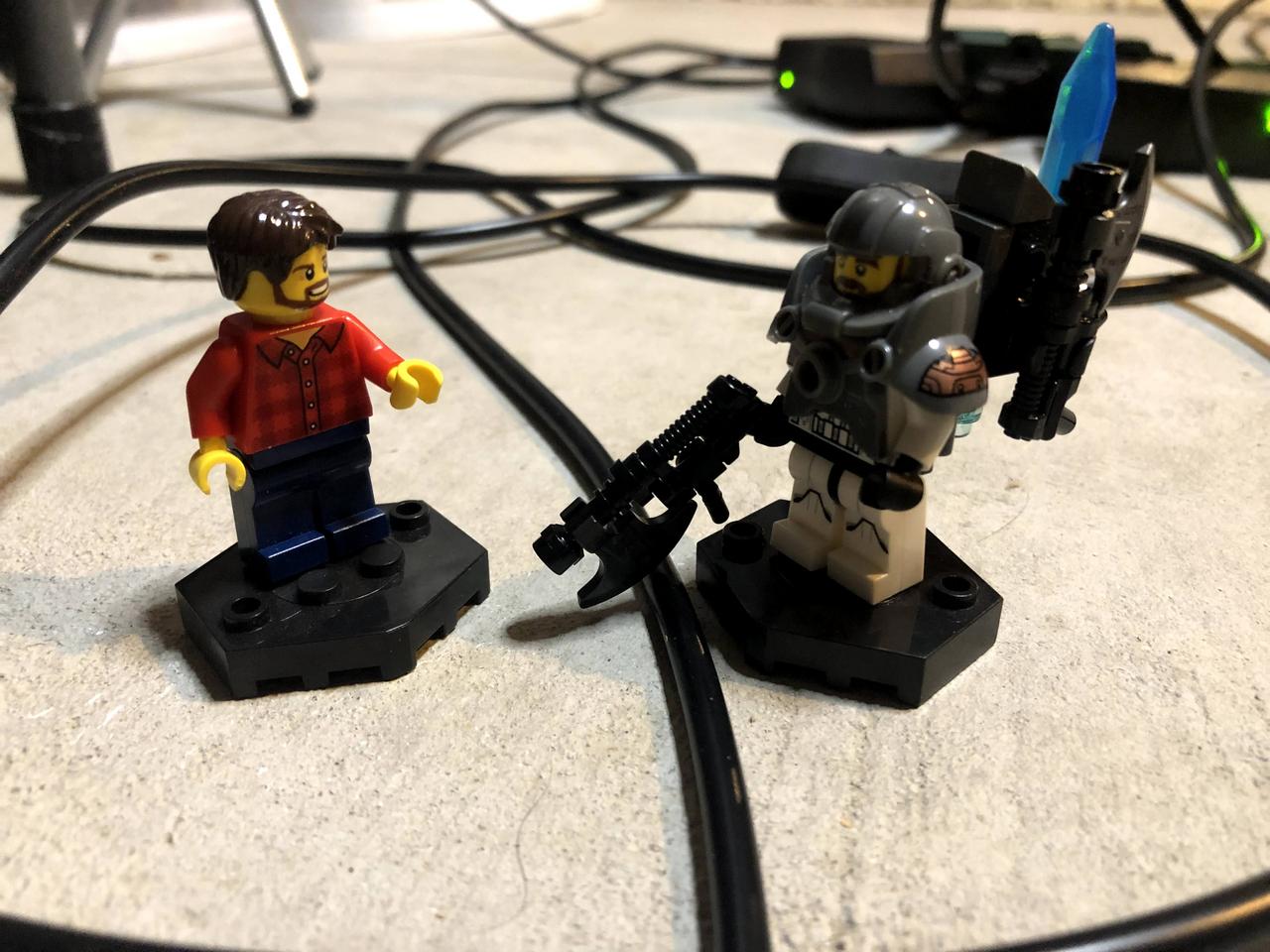 Dienekes eyes him with suspicion, but the mysteriously handsome stranger continues.

"I know, I know, I have some explaining to do. I'm the guy who put you together, believe it or not. Well, I'm his avatar."

He doesn't give Dienekes time to reply.

"See, if you were to view my actual form you would go literally sane, so I had to carefully put a mouthpiece together so that I can share some important information with you, Dienekes."

"You know my name?" Dienekes asked, puzzled. He put his gun away. He might as well listen.

"Walk with me," the mysteriously handsome and fashionable figure says. 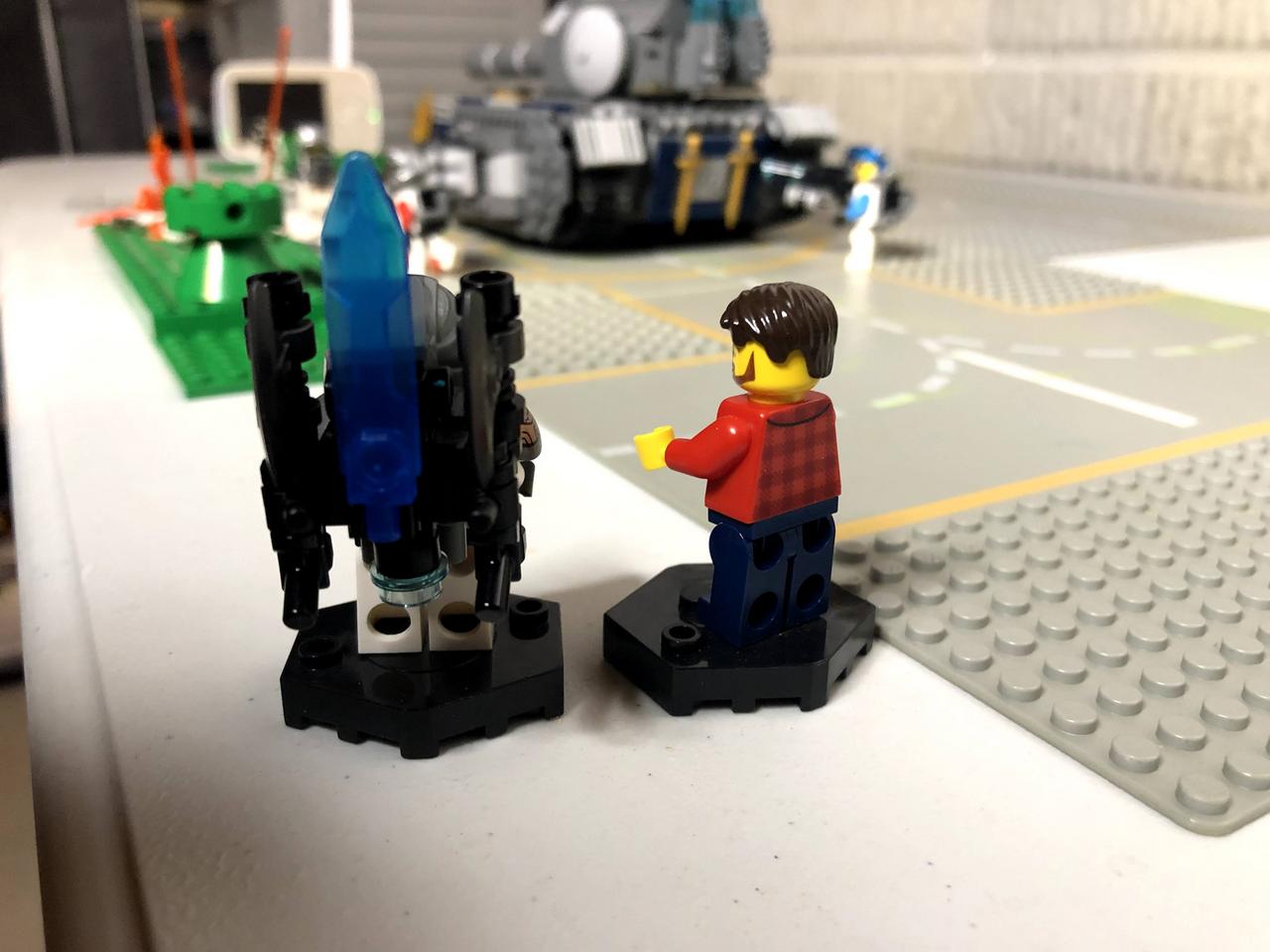 "Does this look familiar?" the figure asks.

"Correct! You believed you were fighting undead space guys (not Undead Deadly Space Men, mind you) because I wanted you to. I carefully crafted such a scenario specifically so we could meet."

"Did you just talk in parenthesis?" Dienekes asks.

"You see, Dienekes," the figure continued, ignoring his question, "I created Skion. I dreamt it up over years and years, slowly building the lore of your home. I am the reason The Swarm fell and the reason you bravely resisted them. All in fun, of course, to impress people I don't know--"

"For fun?" Dienekes shouts, his face burning red with anger. 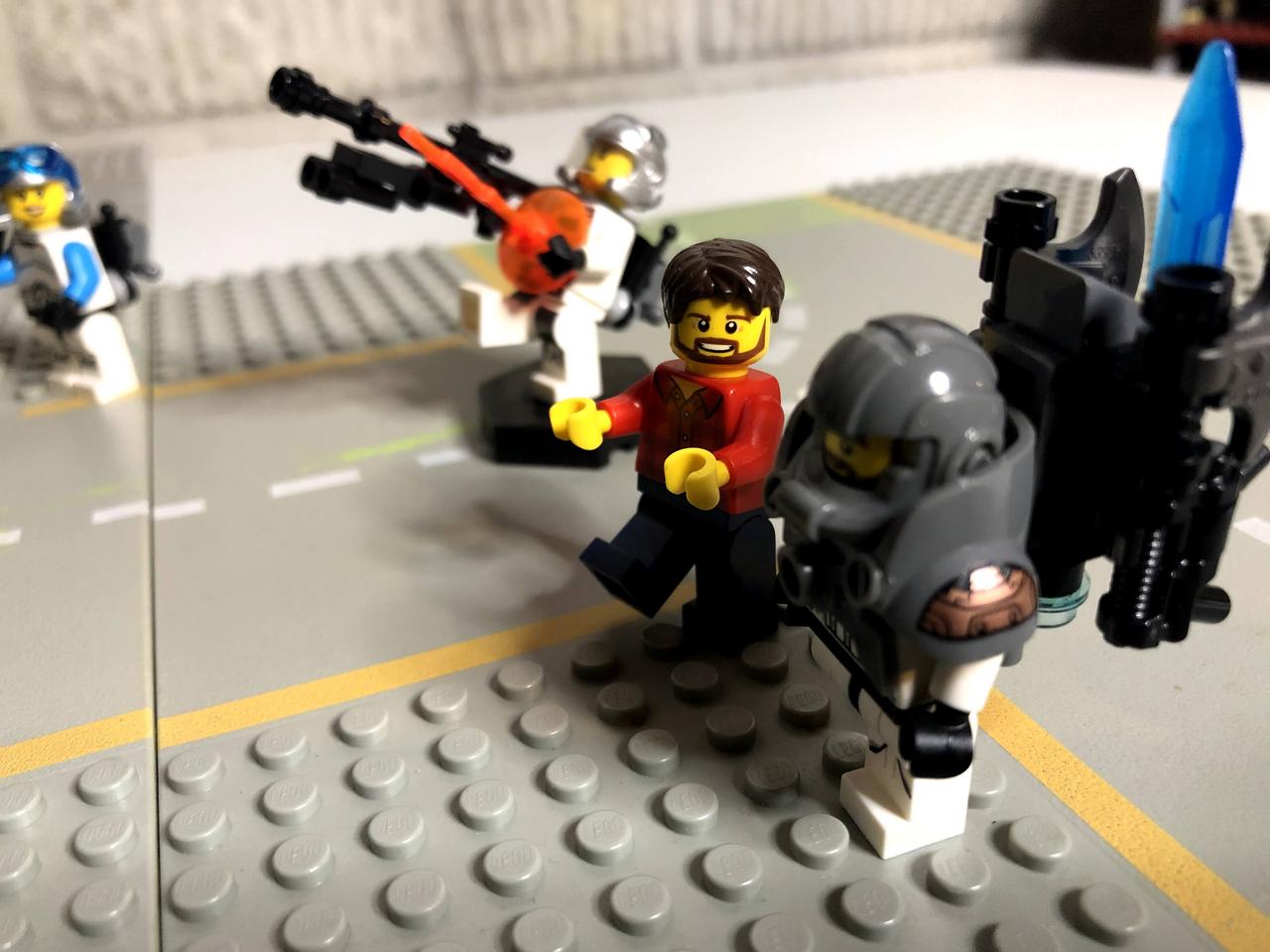 "The Brikverse is a violent, chaotic place. I have watched, passively, as great events took place and wars were fought. I enjoyed the carnage, like everyone, but lacked the ability to effect the outcomes. The Brikverse was becoming more ordered, you see, until it stagnated. How could I craft anything to compete with the lofty empires of Trattoria? How could I wedge my way into the Immortal War? These conflicts were waged long before I arrived and so I was content to observe." 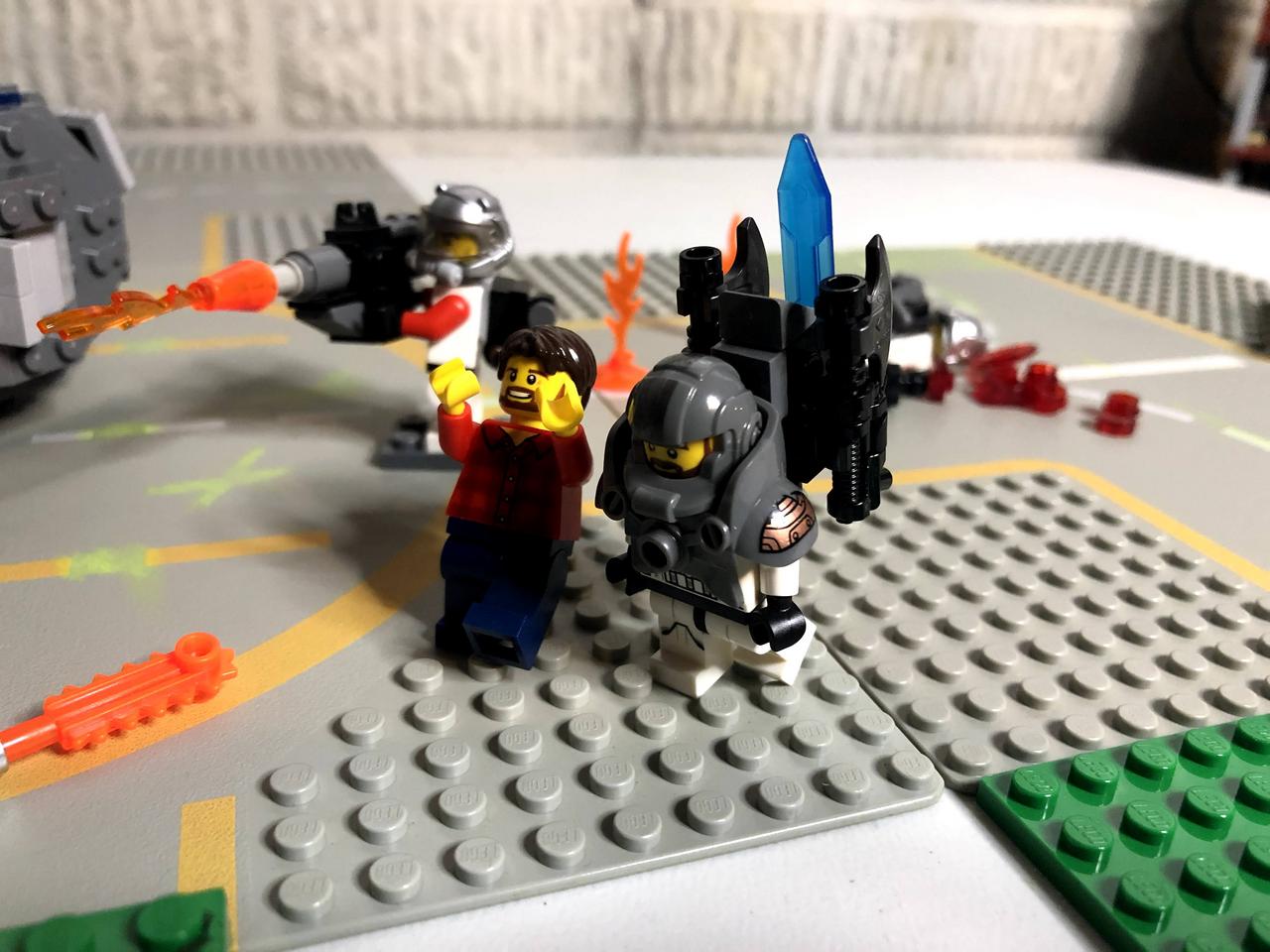 "Make no mistake," the stranger continued, "it was a fabulous time. But, like I said, stagnation. I began building your people but expected to make the same sort of impact with you as I did with my Medivo factions."

"It doesn't matter. My point is I wasn't a major player. I produced content, yes, but was it earth shattering? No. Was it compelling? A little." 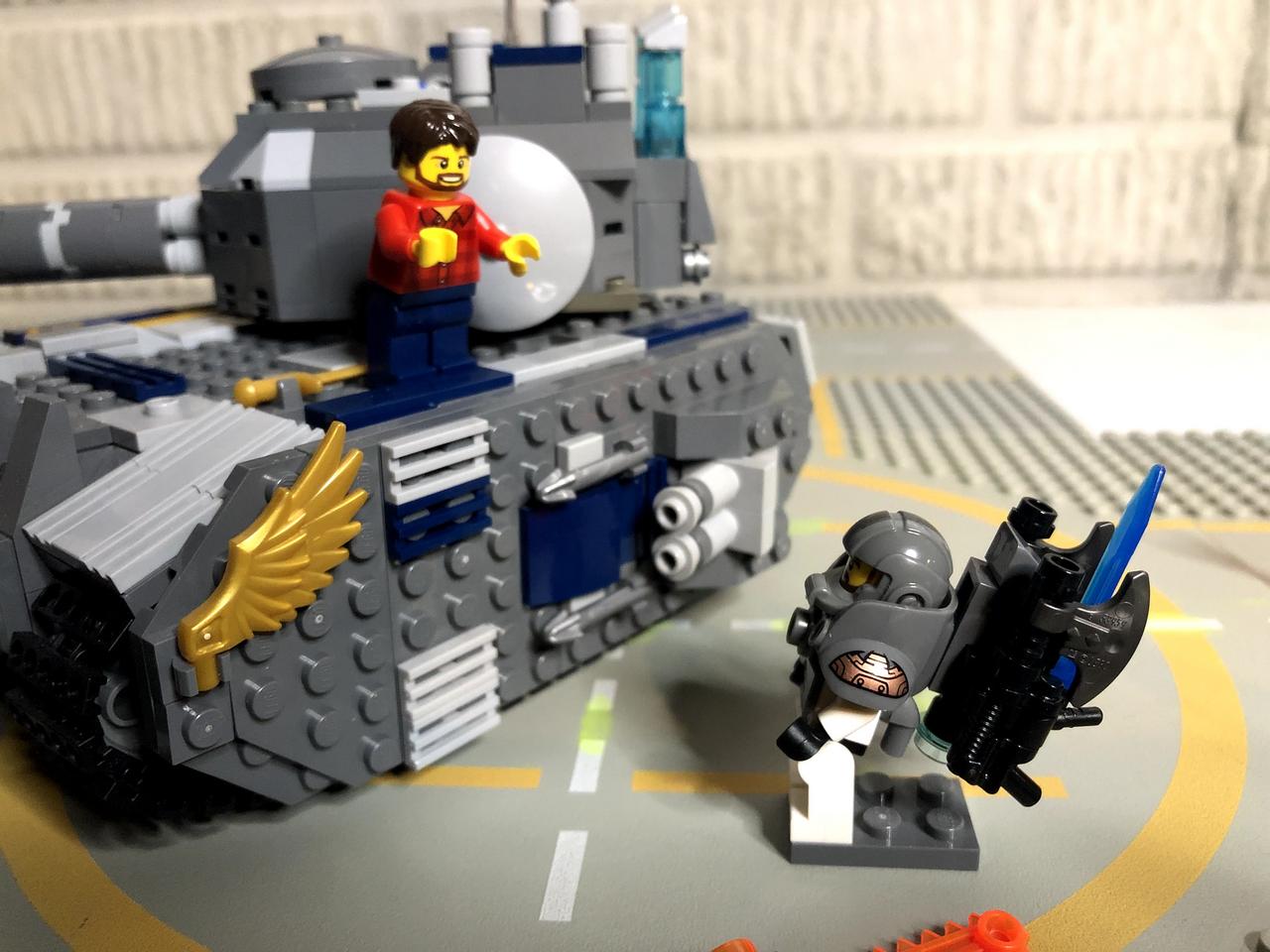 The stranger climbed onto the Thunder Templar amidst the shouts and sounds of battle.

"Then Ragnablock happened. All the old grudges and stories were vaporized. Annihilated. There are openings now, Dienekes. Openings for new stories and conflicts. And now you and your Skion can be a part of it. Did you think it was coincidence that His Serenity declared war? It was not. I am the hand behind the curtain who decreed it would be so."

"I don't understand why," Dienekes said. "Why is this your goal? Why the Skion? Why me?"

"All good questions. This has always been my goal. I wanted to be involved and help craft the great tales and soaps and battles. I want my name to be written in the halls of the great Brikwarriors. The Brikverse will shudder when it hears 'Dienekes22.' "

"Yes, we share a name. I have carried this mantle for years and you for just a few days. But you were created for something special. Something transcendent. Eldon was Skion's first Hero but you are my voice. You are my hand. You are a Quantum Surfer."

He continued, "This means you know your place in the Brikverse. You will cause mayhem and carnage. You will claim lives, just like you always have, but you bear responsibility. I will use you to protect my Kanon. You are the Boss of my Toys."

"I still don't understand what the purpose of all this is," Dienekes said, dismayed. "Why care about us? Why give me this mantle of responsbility?" 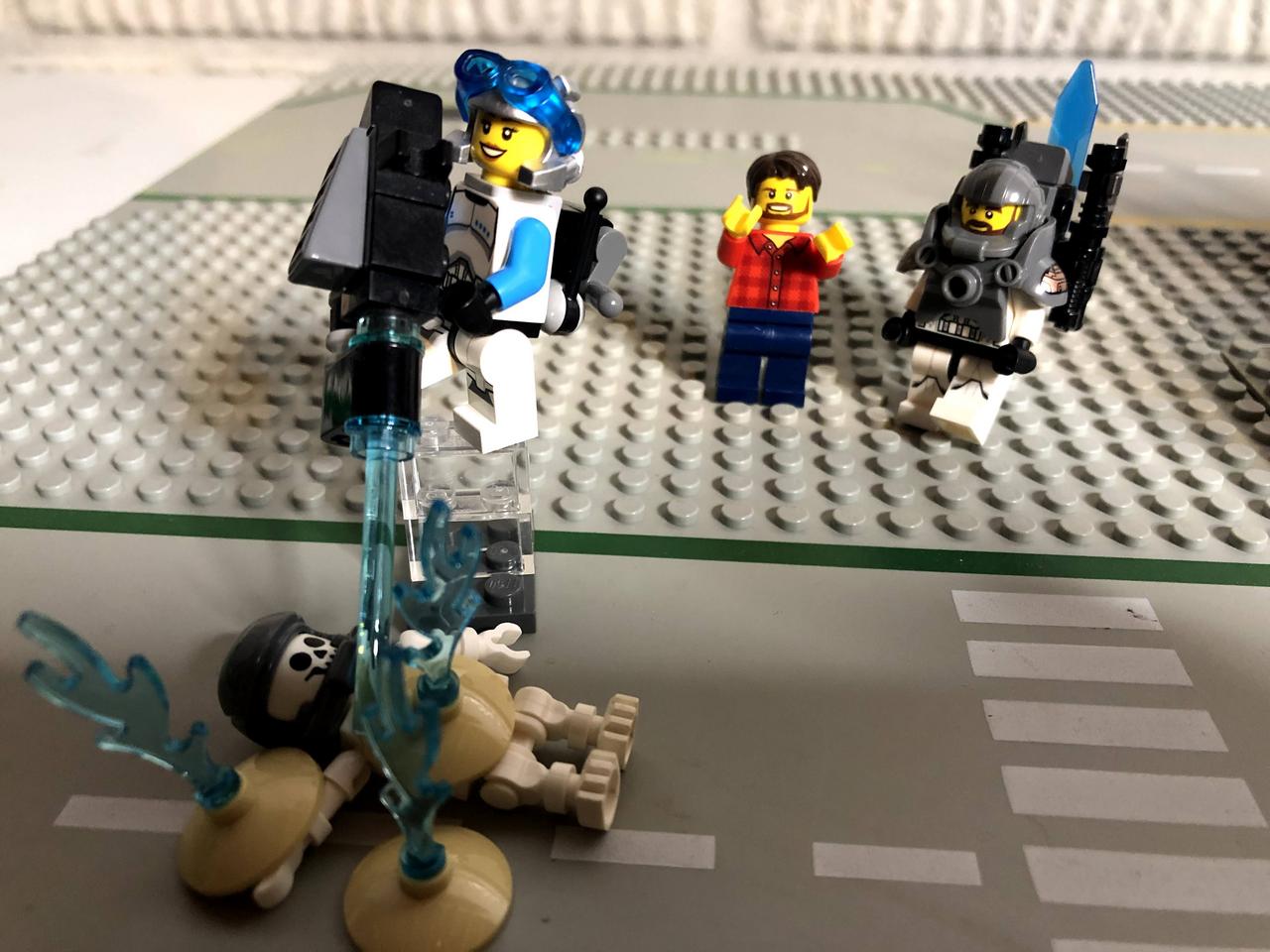 "Look," the stranger said, motioning ahead.
"That is a gal jumping over a skeleton and blasting him to bits with a laser cannon."

"That's the whole point, Dienekes. The point is to do really cool stuff in the Brikverse. When I assembled the associated bits and bobs that would become I intended for you to represent me. And now I want you to do even more. You are QS Dienekes now. You will be pulled into adventures and tales far beyond the scope of Skion and her warmongering. You will see things no minifigure should see. In fact, you may even see The Dice."

The figures turn to face one another.

"Can I count on you, Dienekes? Will you take the mantle of Quantum Surfer and defend the Kanon?"

"I will," Dienekes replied. 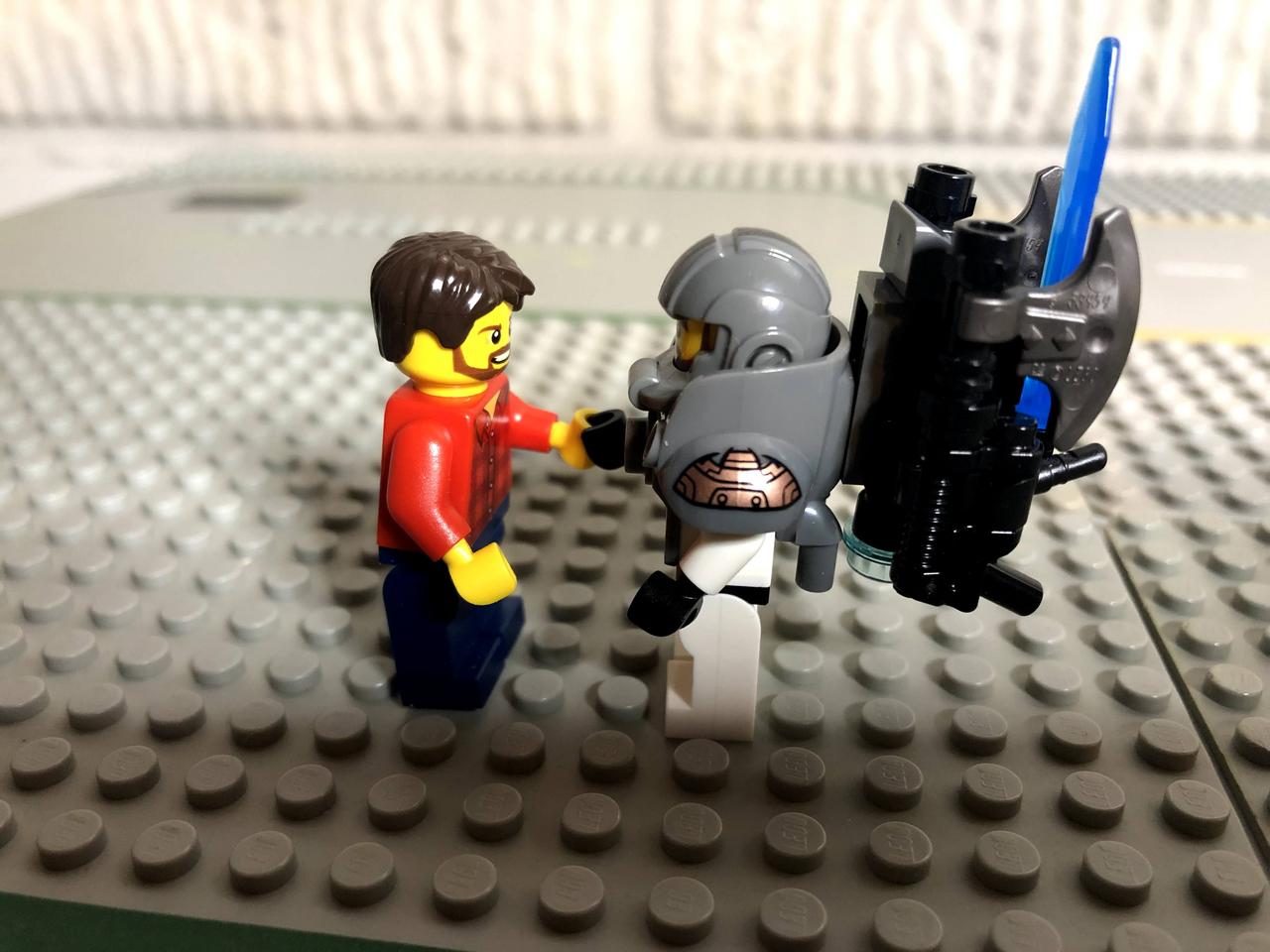 The figs shook hands and the stranger vanished, leaving Dienekes alone for a moment on the infinite plane.

He grinned as he felt the Kanon settle on him.

"Let's get started then."

Believe in the Dienekes that believes in you!
I make apocalypses and apocalypse accessories.

sahasrahla
that is a fantastic question to which no satisfactory answer will be forthcoming
Posts: 805
Joined: Sat Feb 04, 2017 5:40 pm

"I still don't understand what the purpose of all this is," Dienekes said, dismayed. "Why care about us? Why give me this mantle of responsibility?"

"Look," the stranger said, motioning ahead. "That is a gal jumping over a skeleton and blasting him to bits with a laser cannon." 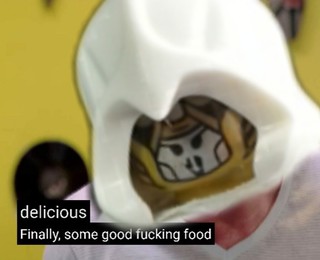 TFW God shoves all his responsibilities onto you.

And so a new saga begins