"The Bell" (German: Die Glocke) represented something at the very pinnacle of SS General’s Hans Kammler's occult and super-secret SS "wonder weapons" empire. Nick Cook's book, “Hunt for Zero Point” represents the only publicly accessible information on this bizarre object in the English language, the equally macabre experimentation that surrounded it, and the stringent security the SS held it under. The following are the salient features of The Bell, according to information Cook received from both German and Czech sources:

(1) The Bell was reportedly a metallic object, approximately 9 ft. in diameter and 12-15 ft. tall;

(2) It looked like a "Bell", hence its codename to the Germans, die Glocke;

(3) It was comprised of two counter-rotating cylinders, rotating a purplish liquid-metallic looking substance code-named "Xerum 525" by the Germans, at high speeds;

(4) "Xerum 525" was apparently highly radioactive, being purple in color, and housed in cylinders with lead lining 3 cm (12 in.) thick;

(5) The Bell apparently required high amounts of electrical power in its operation;


(6) During use, it could only be run for approximately one to two minutes, as it apparently gave off strong radiation and/or other electromagnetic or unknown field effects;

(a) Several scientist died on its first operation;
(b) Subsequent tests included various plants and animals, all of which decomposed into a blackish goo and without normal putrefaction, within a matter of a few minutes or hours after exposure to its field effects when in operation;
(c) Technicians near the Bell during these experiments reported metallic tastes in their mouths after being exposed to it;
(d) The chamber in which the Bell was tested was lined with ceramic bricks and rubber mats, and had to have its rubber matting removed and burned after each test, and it was subsequently washed down with brine by inmates from nearby concentration camps;

(7) All the scientists and witnesses who saw or worked on the Bell were murdered by the SS as the war neared its end;

The Bell was transplanted out of Silesia to a destination that has never been discovered. The Bell, along with General Kammler himself, simply disappear entirely from history, never to be seen again. It is believed, however, that both the Bell and General Kammler were transported by U-boat to a base outside of the Reich (Base 211 in Neu Schwabenland, Antarctica being the strongest choice being the strongest candidate). Others suggest Norway where German troops still held that territory.

(9) A strange "henge" like structure was constructed by the Germans out of reinforced concrete near the facility where the Bell was located and tested. This structure resembled a test rig for the possible test of extremely powerful propulsion devices.

The rotation of the object, and presumably the radioactive liquid-metal called "Xerum 525", suggests that the Germans were investigating the inertial and vortex properties of radioactive material when subjected to high speed rotation, as well as the resulting field effects.
It is likely that this rotation was caused by passing a current through the liquid - hence the high power consumption - but the possibility of mechanical rotation should not be ruled out in addition to this, as German progress in jet engine turbines and uranium centrifuges would have given them the experience to construct very high speed turbines for rotating such material for study. In this sense, it is possible that the Bell was nothing more than two counter-rotating ultra-high speed turbines That is to say, the Bell may have been an ultra high speed electro- mechanical turbine of some sort, an offshoot, perhaps, of German centrifuge technology development.
The housing of this device in an underground chamber lined with ceramic brick and rubber mats suggests that it gave off extremely strong electro-magnetic or electro-static field effects as well as high heat when in operation. The reporting of metallic tastes in the mouths of what few surviving personnel there are suggests this. The quick decay without apparent putrefaction of organic material within its field suggests effects that some would associate with scalar waves.
But what was the mysterious "Xerum 525"? When first investigating this strange material, the first thought is that it might be some radioactive isotope of mercury, or possibly a more radioactive substance in chemical solution of some sort. It is perhaps worth noting that recently a strange substance known as "red mercury", or mercury antominate oxide, has been alleged to have strong neutron emitting properties when subjected to sudden explosive stress, and is alleged to be a non-fissile method of triggering the enormous fusion reactions of hydrogen bombs, as well as being able, in its own right, of fission explosions in the small kiloton range. Perhaps the Nazis had stumbled onto a similar such substance during the war. 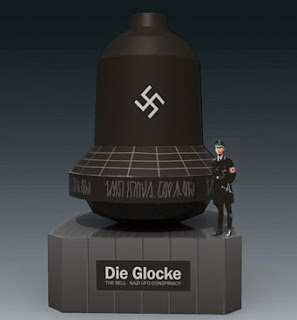 "Xerum 525" was apparently highly radioactive, being purple in color(...)

...So all purple things are radioactive by definition? This new revelation is AWESOME.

This is dumb. We don't need rules for this.
Top

Perhaps if it made the dead into zombies... or Piltogg superzombies.

I actually tested the rules earlier yesterday with a friend, and it was devilish effective at clearing out buildings- I'm considering putting a ship-mounted version on my being built.s
@Magical Soap Bubbles: GTFO! It's not stupid. If you don't like killing people horrible with sever radiation,then you don't belong in this forum.

We have already argued that using gigantic nuclear missiles in Brikwars is kind of lame. I'm with Soap.
Top

But it's not nuclear. It's not explosive. It
s uses radiation to horribly kill people.
Nukes do this:

Die Glocke does this with RADIATION(Not explosions!)

It doesn't matter how it kills them, it's just a little imbalanced to have a radiation producing UFO that kills everything within 24 inches.
Top

As I said, we have talked about nuclear weapons and how stupid they are. This is on the same level as that, just stupidly overpowered.

I'm sure you don't have rules for lingering radiation, do you? The radiation would spread over the whole battlefield, not just the explosion area.
Top

Well if y'all wanna edit the damage and junk-go right ahead! Just suggest it and i will edit it promptly.

I meant in terms of rules. Yes, it is an awesome weapon, but have you playtested it? I mean, what your saying is Get Lost unless you say "[email protected]@@@[email protected]!"

Now, I think talking about this weapon in brikwars terms is better.
Top

Your right-I'll play test it today. I'll build it and see how it works-I'll take pics.

Nukes are only good for ship to ship warfare and that's only if they're big ships and small nukes.

Who's to say they managed to make it work properly anyway, maybe the radiation thing was just an adverse effect and not the end result. I'm still pushing for the Zombie thing. Mr Lincoln will be in touch.