Since we've had so many new users, I thought I'd make an updated thread for my main faction, Bavaria.

Bavaria is a medium sized empire ruled by Kaiserin Renate, the wife of the late Kaiser Klaus. Bavarians differ from normal minifigs in one way, they have higher fertility, which means that twins and triplets are often the case, and as such it has a very large growing population it needs to support by conquering and colonizing new lands. Wars also act as a culling, by eliminating large portions of the population.

The heirs to the throne are Prinz Klaus Jr., whose soul was transformed into a living rock, and whose body was destroyed by the Space Mafia. He is a sadist and one of the most powerful mages in the Magician's Alliance (an alliance of several Magical organizations that share research and resources with each other). Prinz Klaus Jr. is the oldest heir, but due to the fact that he lacks a non-horrifying body, others have supported Prinzessin Amelie. She is the Polemarch of the Fleet, and controls the majority of the Bavarian Navy, as well as it's best admirals. Others still have argued that Prinz Karl "Gustav", the youngest heir, and esteemed tank commander should be the next Kaiser due to his gender. He has backing from his wife, Il Duchessa of Space Venice, as well as the Space Mafia. 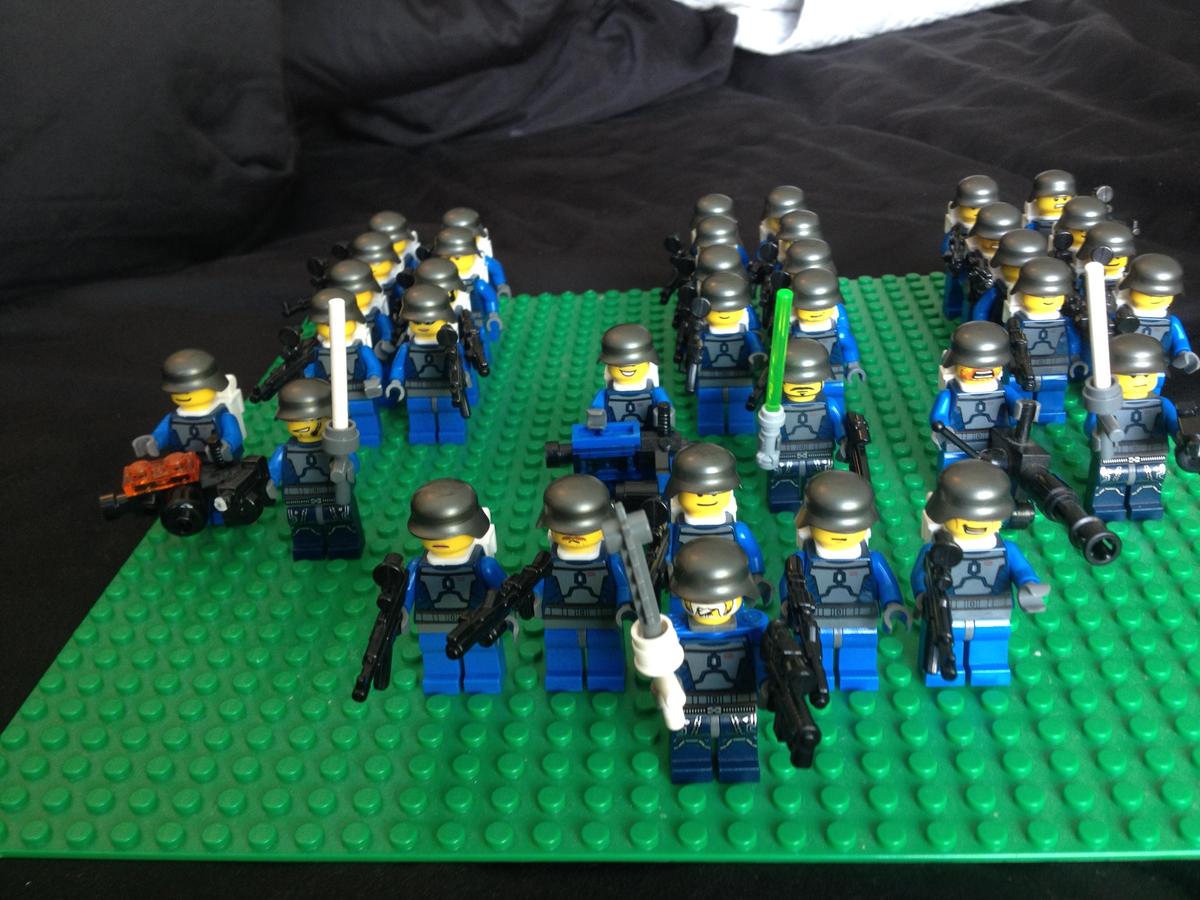 This is the main infrantry of the Reuzenmacht. Squads are composed of eight soldiers, a sergeant, and a heavy weapons specialist. 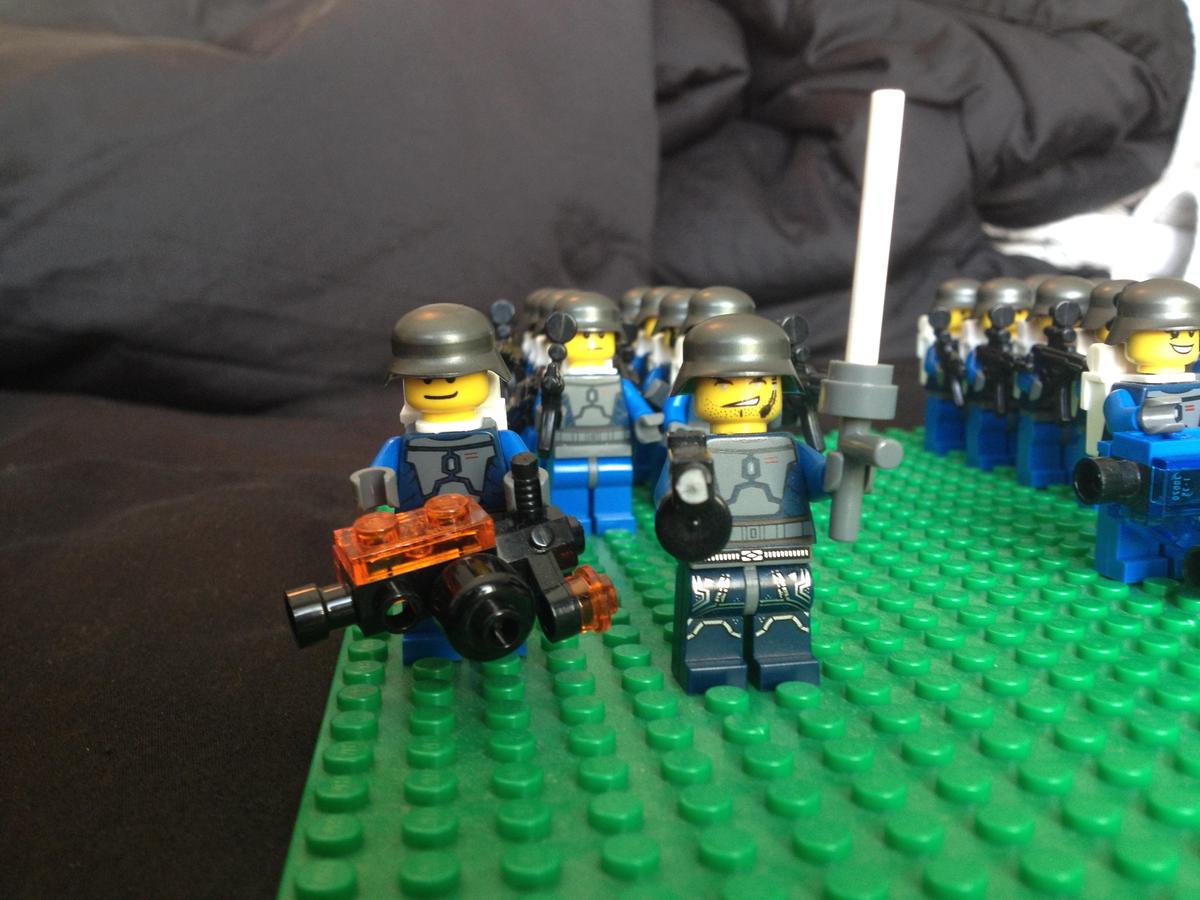 This heavy wields a flammenwerfer, and his officer wields a machinepistol and a whitesaber, a purifying blade that can also function as a bludgeon for discipline. 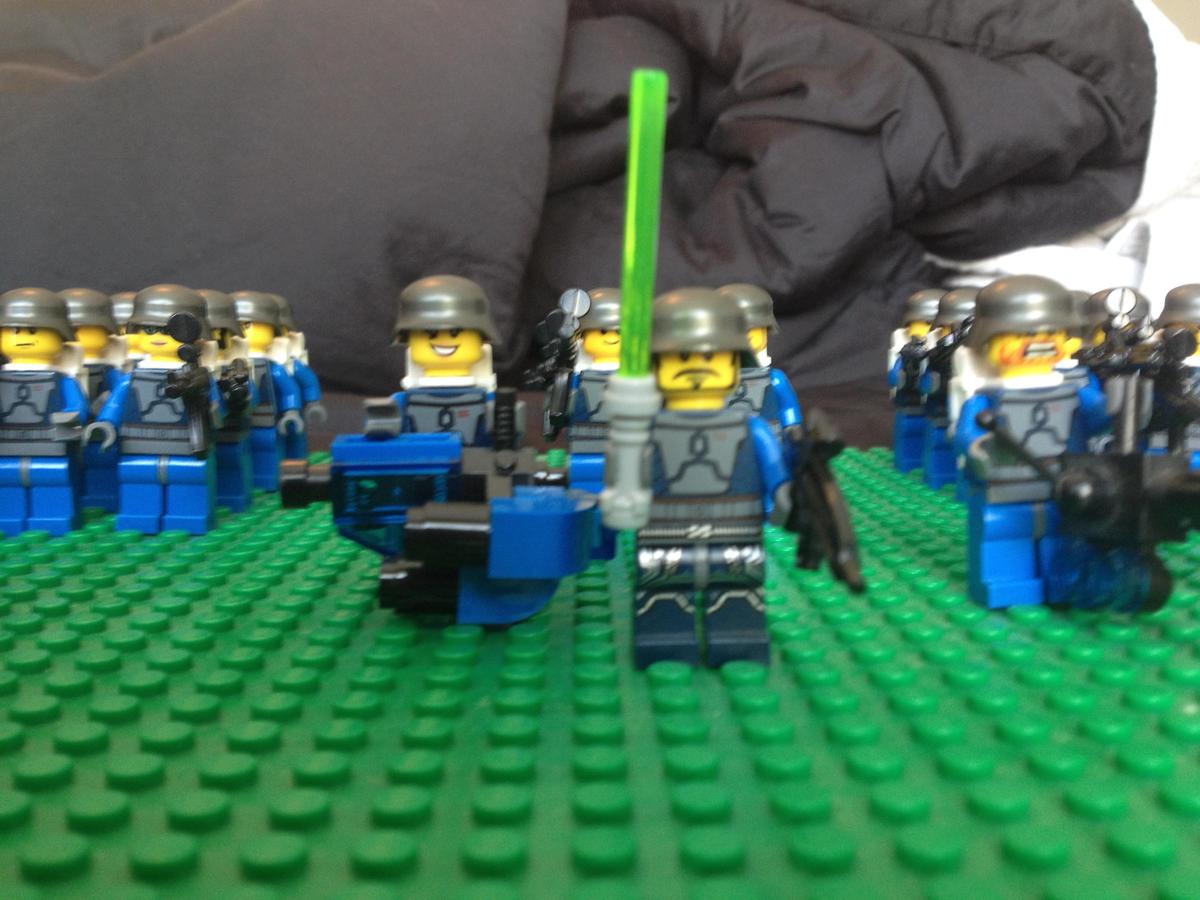 This heavy wields a tri-blaster, a heavy plasma weapon that fires from three barrels at once. Look how happy she is. Her Sergeant wields a rifle and a beamsaber. 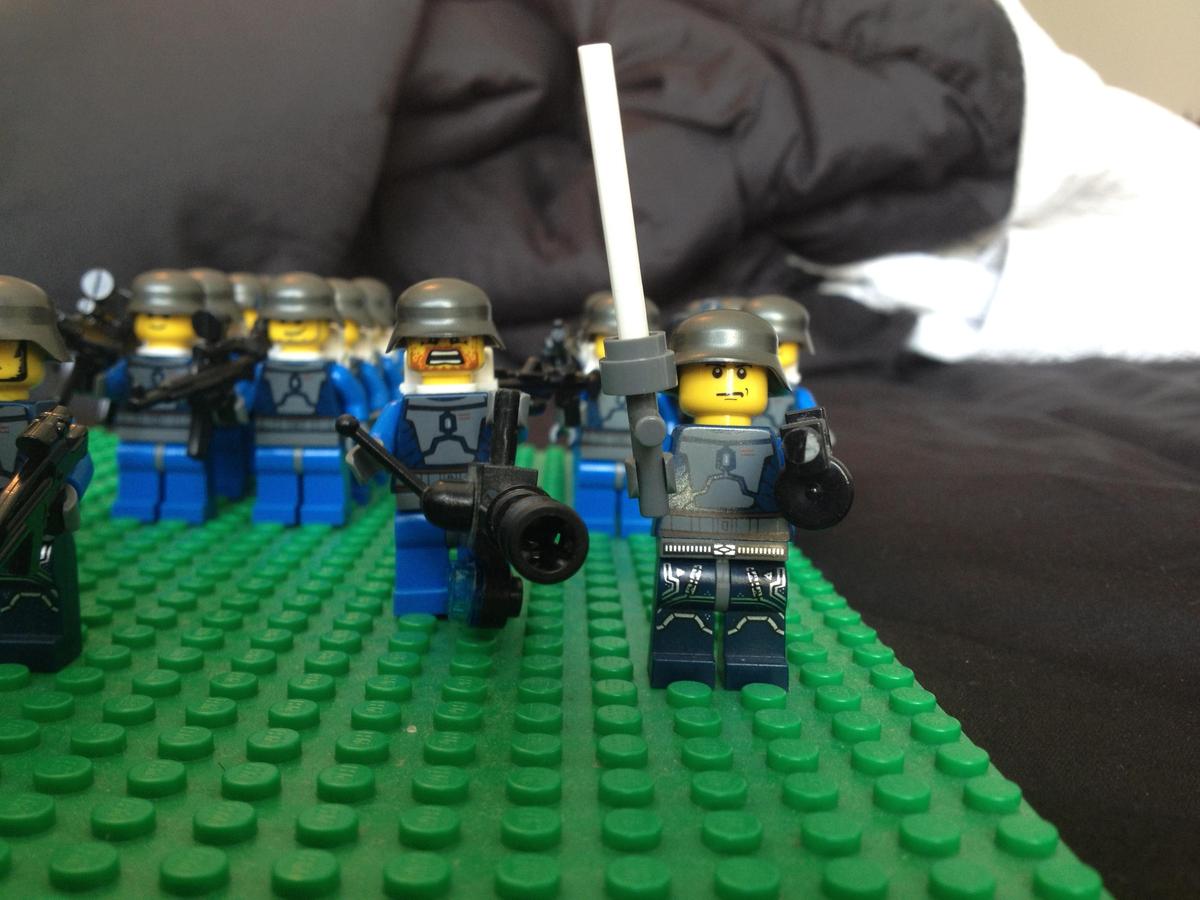 Lastly, we have the super-heavy bolter. A machinegun capable of firing armour piercing explosive shells. 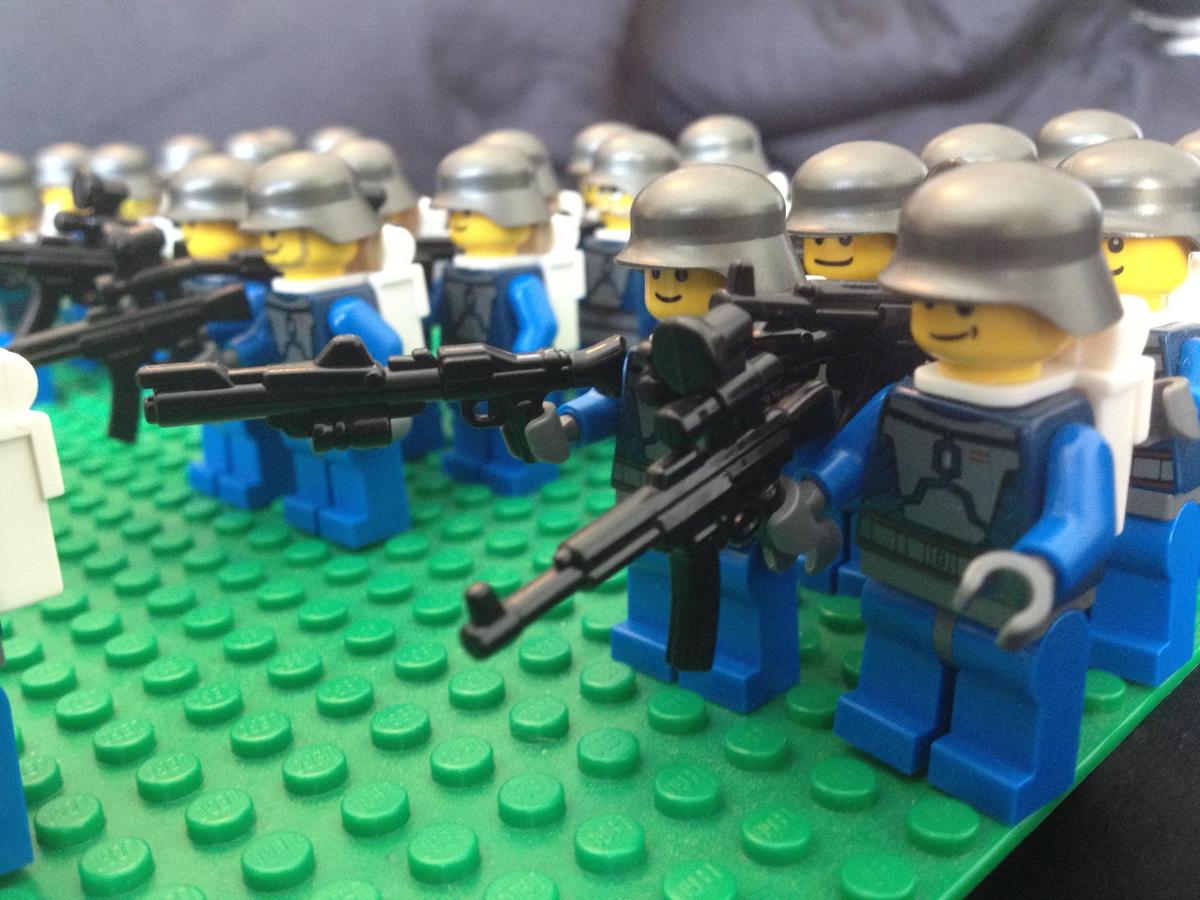 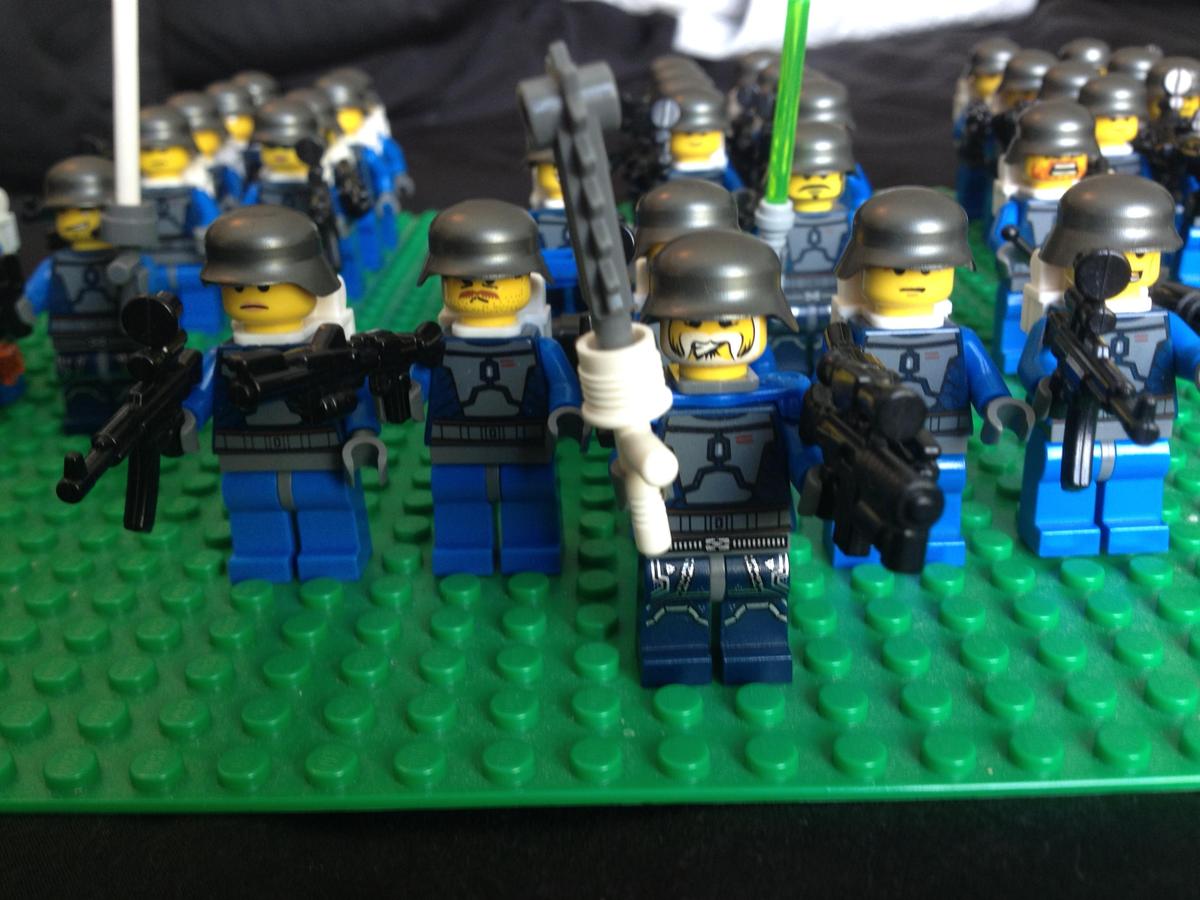 In any force, there is a forlorn hope squad made up of volunteers and lead by a veteran officer. These troops have the most dangerous missions and the highest rates of death, but any survivors have an immediate promotion. 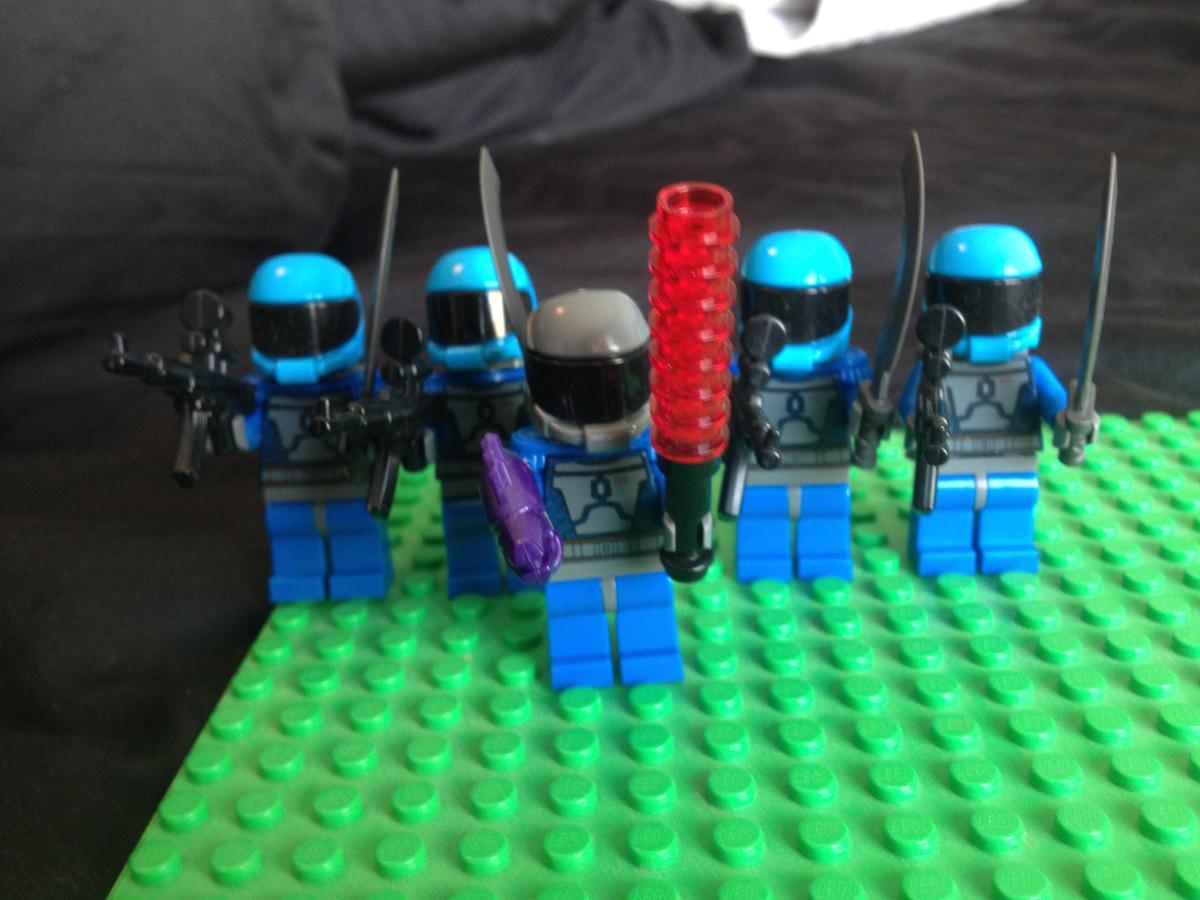 These are the Feldgeister, jetpack soldiers who provide covering fire and mobility to other troops. 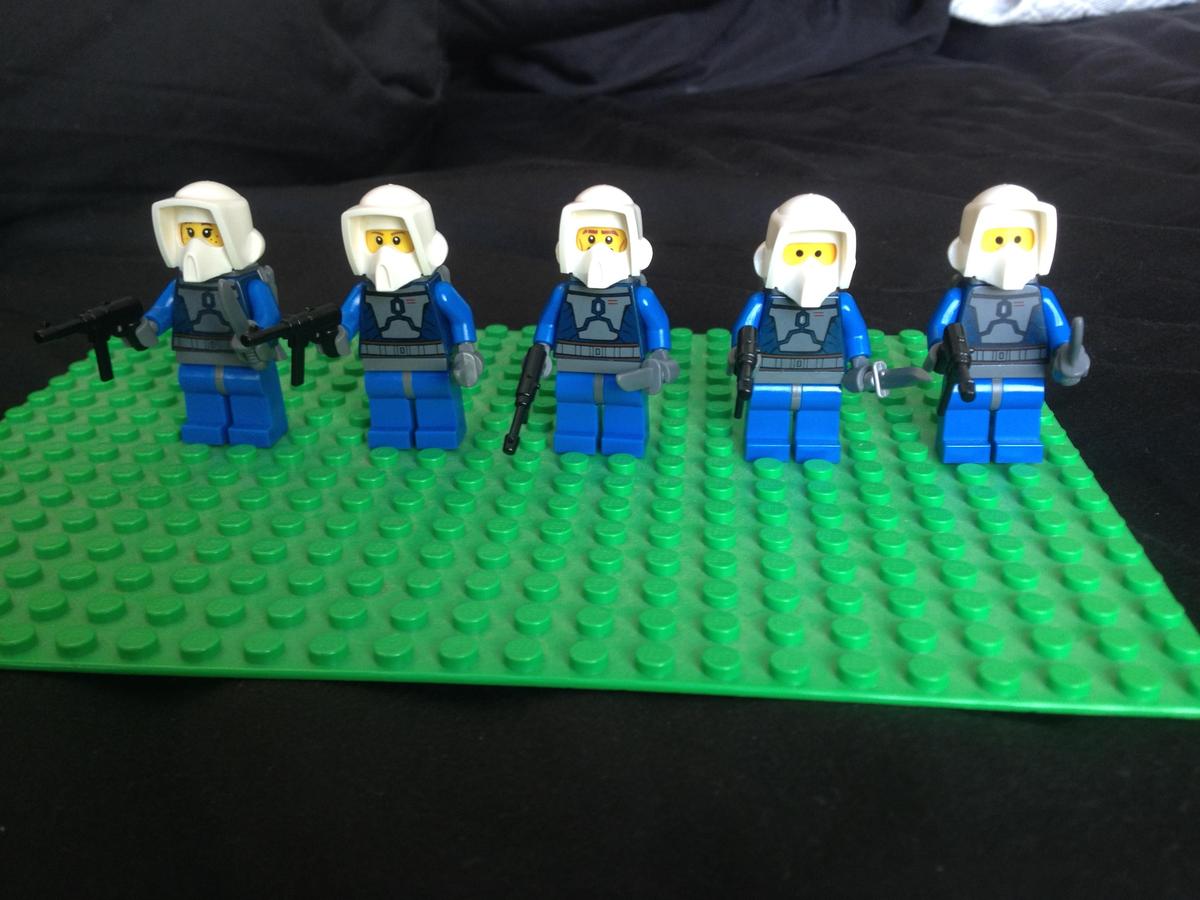 Then we have the feared Valkyries, doctor commandos who will fly in to save their comrades or gun down their enemies. They're renowned for their amputation and torture abilities. 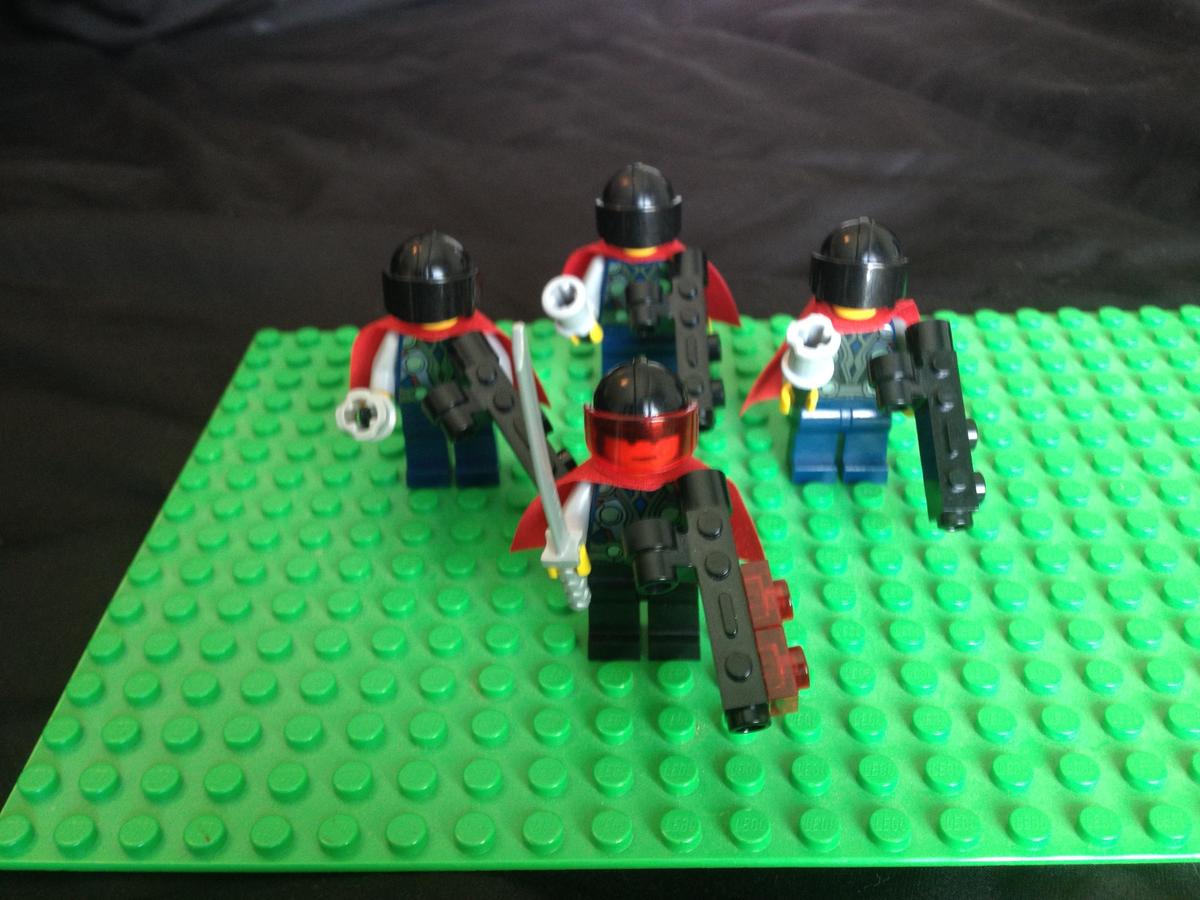 The grenadiers are some of the most disciplined and well trained soldiers in the Bavarian Reuzenmacht, second only to the Jaegers. They are under the direct command of generals, and their helmets scan for areas to detect the areas where they can do the most damage to enemy troops. They are just as used to acting as squads as well as single units. 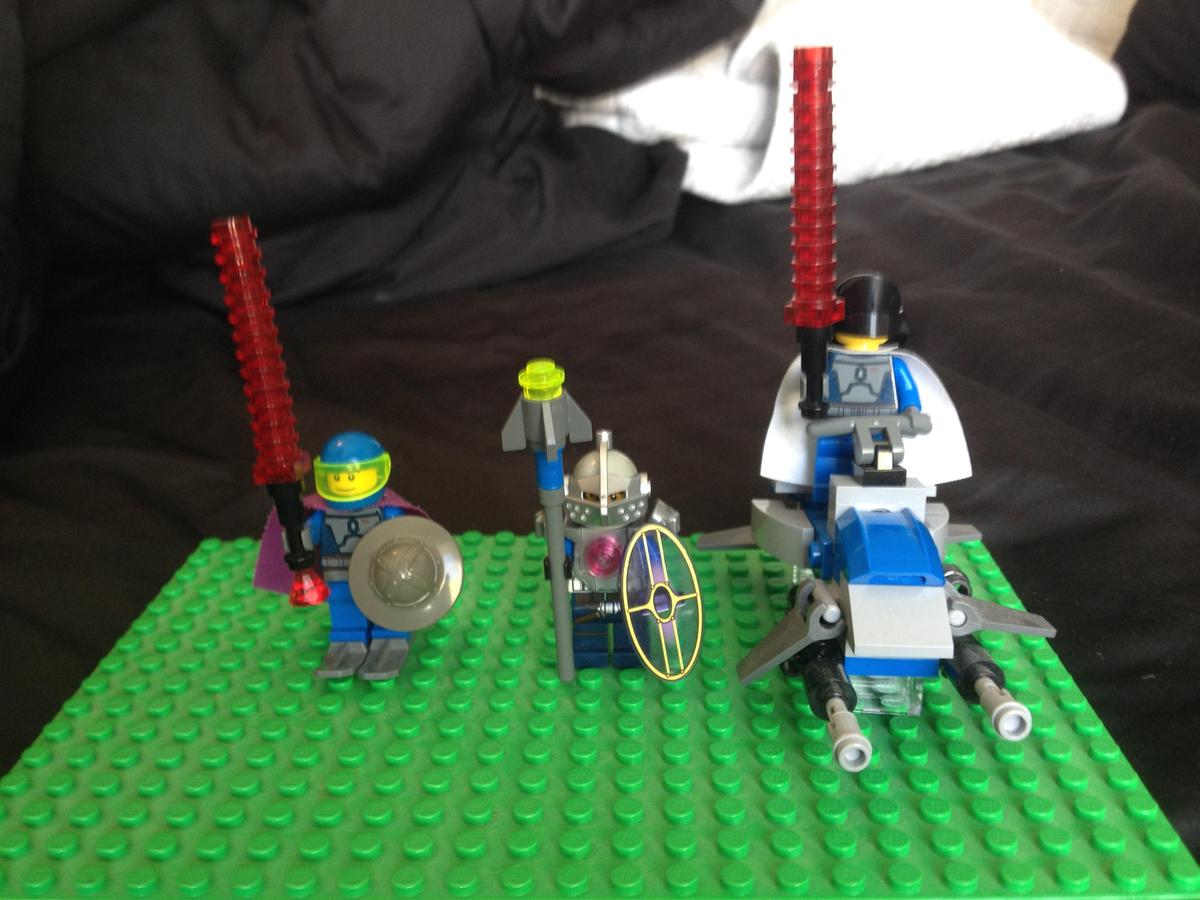 The Knights are the most variable units in Bavaria, and can essentially look like anything. Some knights fight more traditionally, with beamsabers and heavy powered armour on the frontline. Others fight on speeders and from mecha. They answer only to their lord and the Kaiserin. 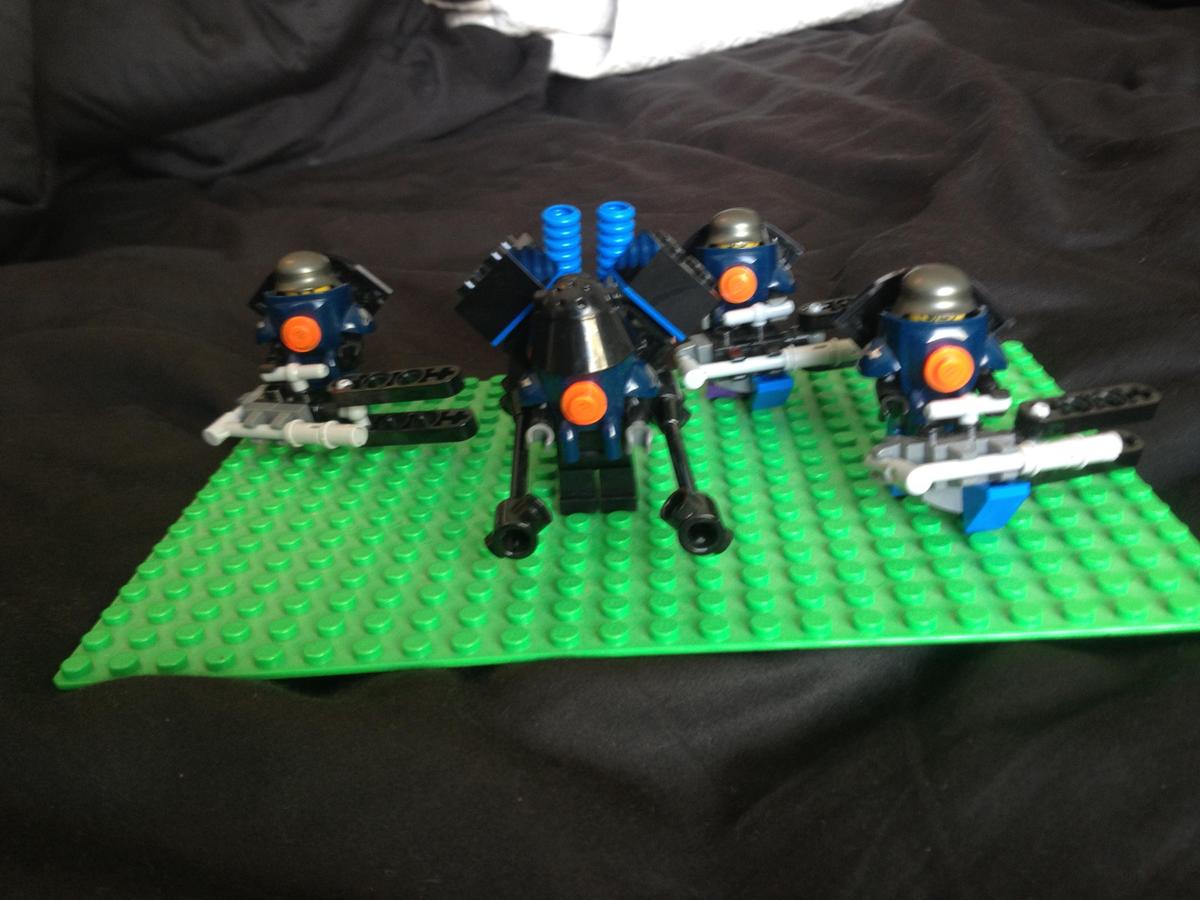 Lastly we have the Riesenlasters, the heavily armoured and heavily armed troops of the Bavarian Reuzenmacht.

Regulars wield railguns with a secondary tracking chip. They fire chips at targets to give their allies targetting bonuses, or blast through armour with their railguns. 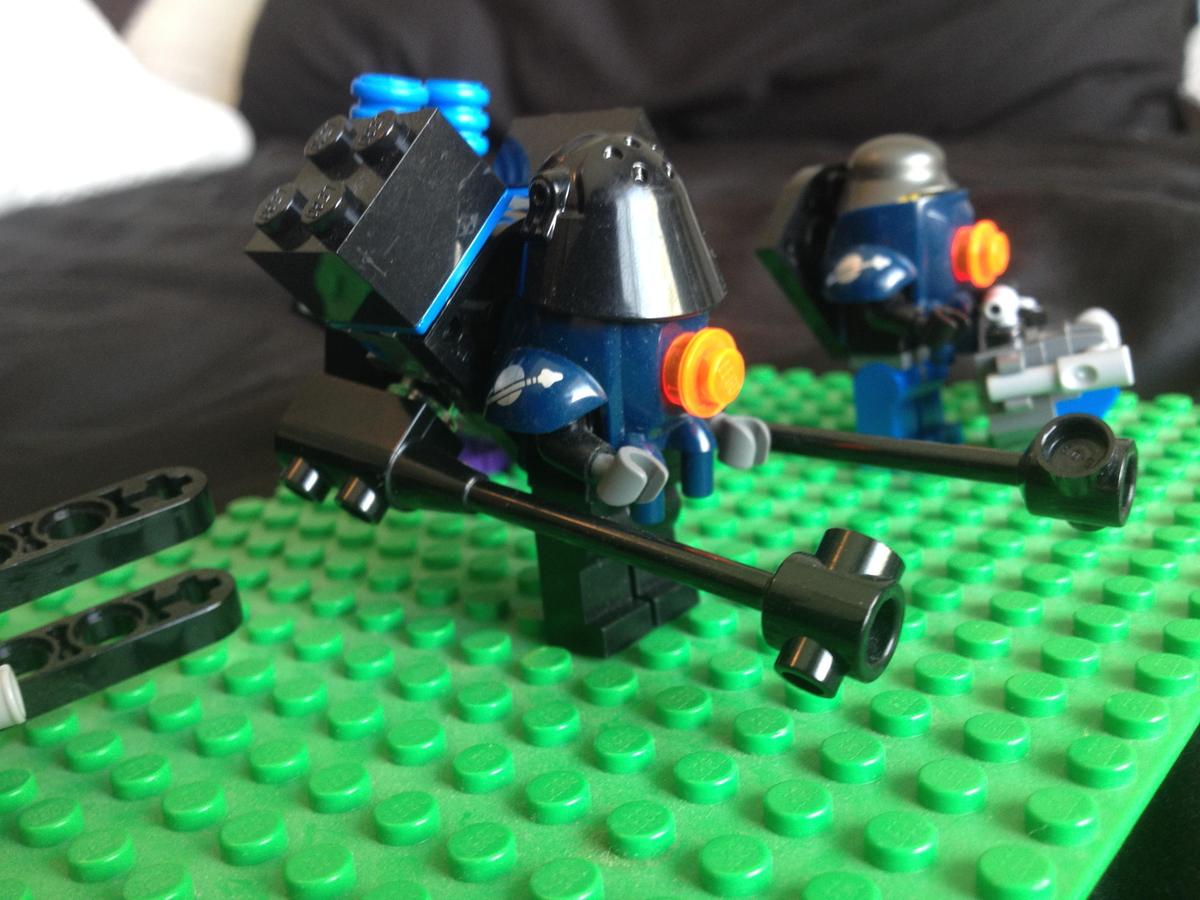 Other Riesenlasters fight with even bigger cannons and act as living artillery.
Top

Where my jaegers at?

RedRover wrote:Where my jaegers at?

Jaegers, are being reviewed for an update. Not anything big, probably just custom capes.
Top

Got ya. I've done so many updates as well, I need to post updated pictures of most of the factions on my factions revamped page.
Last edited by RedRover on Sun May 01, 2016 8:24 pm, edited 1 time in total.

Looking as good as ever. The variety in the heavy weapons troops across the squads is cool, and I'm digging the railguns. No vehicles? Or just no time yet?
Ask now what I'm doing, even for me

mercury19 wrote:Looking as good as ever. The variety in the heavy weapons troops across the squads is cool, and I'm digging the railguns. No vehicles? Or just no time yet?

Aside from my Panzers and Fighter, I'm planning on smashing all my old vehicles and creating something new.
Top

Nice figs, but why did you chop the barrels of the Tommy Guns?

Duerer wrote:Nice figs, but why did you chop the barrels of the Tommy Guns?

Tommy guns are pretty ugly and you can make really cool grenades with the barrels.
Top

I've been really looking forward to this, Bavaria is one of my favorite factions of all time.
Phalek empire, S.P.A., Belgïe, My claim to not being a shitbuilder.

Looking at the artillery, someone watched hellsing....

I don't like the white backpacks. Maybe it's the lighting, but the contrast doesn't work for me.

The big Riesenlaster looks sweet though.

Your forces look great as always. I like the addition of white back-packs. Why don't you share an Overwatch photo including all figs and vehicles?
My Youtube Channel About LEGO and Toys
Top

The basic troops seem a lot more coherent than the last time you posted them. I like the Grenadiers and the Knights especially.
[21:30:33] Scritch: you can put it in theblackdog

Where are the vehicles? How can something be stickied if its just a bunch of figs?
My keboa5rd =isn't wo5rk=ing ve5ry well at the moment... Exc6use any m=istakes =in my ty-p=ing.(T5r6ust, me =it can get a lot wo5rse than th=is)
Top

Bavaria doesn't need vehicles, because their figs are epic