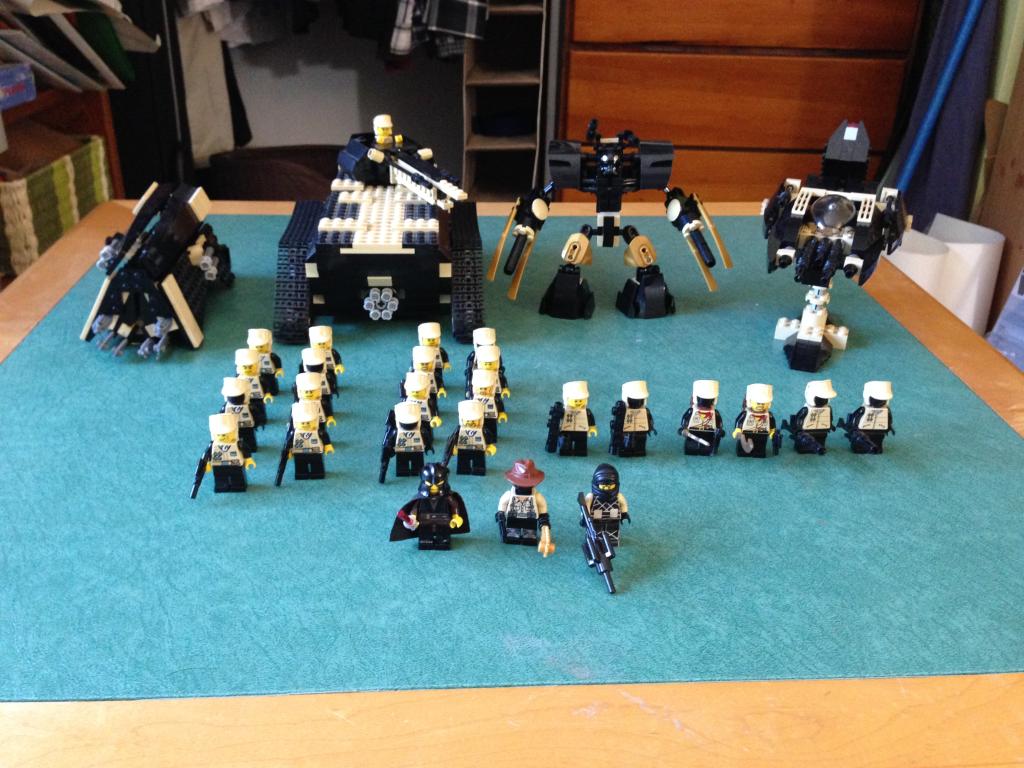 The Avokhan Empire began an undetermined amount of time in the past, in some little known area below the galactik plane. It began with two small empires, each spanning no more than 5 or 6 planets. The Avokhii are traditional yellow minifigs, believed to be descendants of stranded colonists from some unknown empire. The Kraakhan, however, are featureless, entirely black. They are believed to be cast off DSM experiments. The two empires fought, from fear of differences mostly, for a really long time.

They were nearing complete annihilation due to equally matched forces when The Great Uniter came. They saw great destructive potential going to waste. So they brought together what was left of the sorry excuses for governments the empires had, and demanded they swear allegiance to them. They had to kill all of the highest ranking officials before the rest complied. They then had messages sent to all fronts to stop fighting. So began the long process of rebuilding, crushing old hatreds, and re arming to go to the greater BrikVerse. In the meantime, The Great Uniter created an intelligence network to learn about the rest of the galaxy.

The Avokhan is a true Empire, with the supreme law coming down from the Great Uniter themselves. Immediately under him are the two Grand Chancellors, one each for the Avokhii and the Krakhan. Their roles include keeping the peace between their two races, a relativity simple task these days, as well as enforcing the laws of the Empire. Under them is the rest of the government, as usual.

The Great Uniter Now the Emperor of the Avokhan Empire, they are seldom seen outside of their throne room/execution chamber. They are rumored to be a being made of pure OT, and hold immense power. They rarely make public appearances, choosing to let their aides deliver their speeches. They only go to battle occasionally, and only if the enemy is worthy.

Unbeknownst to the common citizen of the Empire, the original Great Uniter was, in fact, the QuantumSurfer Mercury the 19th. Soon after creating the Empire, however, he discovered other things that needed his QuantumSurfer attention, and secretly appointed friend and second in command, Alexis Grimburn. This is a secret known only to Mercury, Alexis, and the Grand Chancellors of the Avokhii and Krakhan. This is part of the reason she does not go out, as it may reveal the lack of powers that the Great Uniter is rumored to have.

Captain John Ferros John Ferros is the Krakhan captain of the Frontier Division of the military, leading excursions into the greater BrikVerse. He rose to his position after his exemplary performance in the Peach Elimination Campaign.He has an abiding hatred for Peaches of all kinds and kills any and all Peaches he comes across. He is also a part of a shady, fedora wearing organization, unbeknownst to his superiors.

The Avokhan culture is heavily influenced by their past conflict. The Great Uniter taught them the importance of unity, and the loyalty that this requires. As such they rank loyalty as one of their greatest virtues, especially loyalty to one's family or to the Empire. This, in turn, has lead to an extreme dislike of lawlessness, because it goes against loyalty. Things like the International Space Mafia are held in great disdain. The greatest offence a minifig can commit in their eyes is betrayal, followed by breaking the law. As such many Imperial citizens who have had dealings with the ISM are shunned.

About mid-BR 2,012, the Avokhan began expanding. They aim to join the Anti-Immortal Alliance, if only because the they seem to be worthy opponents, and their sworn enemy is with the Immortals. They have, however, hit a stumbling block, in the form of the planet Ossum. The local Mechanus Empire is putting up heavy resistance to Avokhan occupation. Progress elsewhere has slowed to a crawl as the fighting escalates.

Following a cease fire on Planet Ossum for the time being, the Empire has turned its attention outwards and is preparing to make its presence known in force.

- A battle, possibly the first, for planet Ossum. Forum Thread