Big Ugly Rock Piece Man is one of the biggest and ugliest of all rock pieces. Having only one moving part that seems to only accommodate one certain LURP piece, the BURPman is arguably the most POOP-filled life form in the galaxy. Little is currently known about BURPman other than that he dwells in the caves of BURPstick9. There he is the ruler of the little BURPmon (short for "BURP monsters") which mysteriously appeared in R. 2,008 - 2,009. He and his little minions frequently have to fight miners to save their power crystals from being stolen as BURPmen like their shiny objects a lot.

In R. 2,009 the mysterious BURPking appeared, forming his own underground empire of BURPmon. Since he is not a POOP being, it is believed that he was created by some outside force. Who did this and why is unknown. 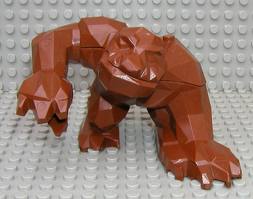