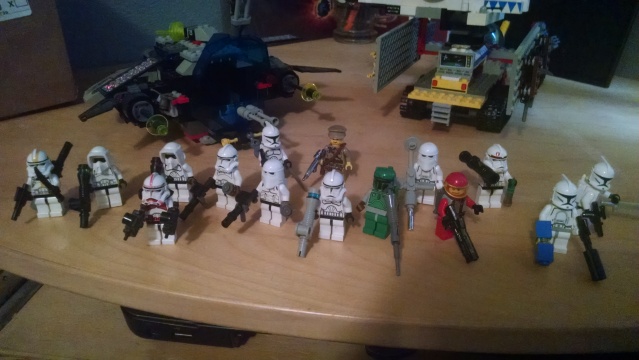 The BrainTrust Initative led the Corporate Revolution in the old galactic civil wars of BR 2,007. Back then, a unified yet oppressive government entity had crushed planet after planet in the name of long-standing peace. Equally strict trade tariffs and other commercial regulations led several corporations to come together in protest of the Galactic Union, including Octan and RoboCrown in addition to several mercenary and even pirate groups. Braintrust, however, was the first to suggest that the corporate powers unify their private militaries in revolution.

BrainTrust was a private security specialist firm that hired out its elite soldiers to protect trade partners, ironically enough from the very mercenaries the corporation later allied itself with. Led by Vyork Wol, a gelatinous alien from a race well-known for telekinetic prowess, the company specialized in transportation solutions as well as experimental weapons. The most deadly of these weapons however was the Mindsuit, which amplifies a wearer's telekinetic potential enough to rival a minor god.

The Corporate Wars were started when, after the Galactic Corporate Alliance was formed, an agent of BraintTrust assassinated the Galactic Emperor. Though his mind was saved, it was forced to be preserved inside of a robotic chassis. For years the Galactic Union waged war on the alliance that tore across the cosmos. The Union quickly lost popular support as most civillians used the opportunity to take what they could, but a large supply of battle droids and other artificially intelligent war machines gave the Union the upper hand.

In time however, the Emperor fused more and more with his cybernetic core. His differences with his cabinet grew larger and larger, until a plot to exterminate all but a select few humans from the face of the galaxy was uncovered. He was quickly assassinated, but almost all of the Union's cybernetic corps were already programmed to carry out the operation immediately. Now only a small group of humans command the robotic armies to combat an equally splintered GCA, which succumbed to internal struggles between the various corporations.

Today, the BrainTrust Initiative is largely untouched by the consequences of those years of war, but has transformed itself from security, weapons and transportation manufacturer into a full-fledged nomadic military fleet led by telekinetic supersoldiers. Still led by the Mind Master Vyork Wol, BrainTrust reaps the cosmos for the resources it needs and fears no mortal opponents. BrainTrust's league of soldiers is well-trained and well-disciplined, but still pride themselves on individuality and liberty.

The BrainTrust Corp. generally sends officers into battle with its soldiers, but some officers are better than others. To the left in the picture below is one of BrainTrust's prized Psi-Troopers, an officer with telekinesis wearing one of the company's famous Mind Suits. To the right stands Vyork Wol himself, in his own battle-scarred Mind Suit that he has worn for nearly two decades. The mind suits that both are wearing add supernatural dice to the wearer's own supernatural potential, which makes wearers capable of projecting shielding energy fields and launching vehicles and infantry flying if need be. Mind Soldiers are also quite capable of manipulating their telekinetic energy to achieve sustained flight. Typically, mind soldiers prefer melee weapons to take advantage of their incredible speeds.