Some creatures perform a specific job particularly well. They are often called on to fill specialty roles within a BrikWars army.

Heroes are the specialty role in any BrikWars army. They are superior to all other minifigs, by dent of their cool outfits and kickass equipment. Other minifigs tend to believe it too, as they are always willing to throw themselves in front of danger in order to protect these vaunted lords of battle. Though heroes do not share the battlefield well with other such leaders, and are bound by their chosen attitudes, they are capable of extraordinary feats by exercising a form of narrative control each turn. 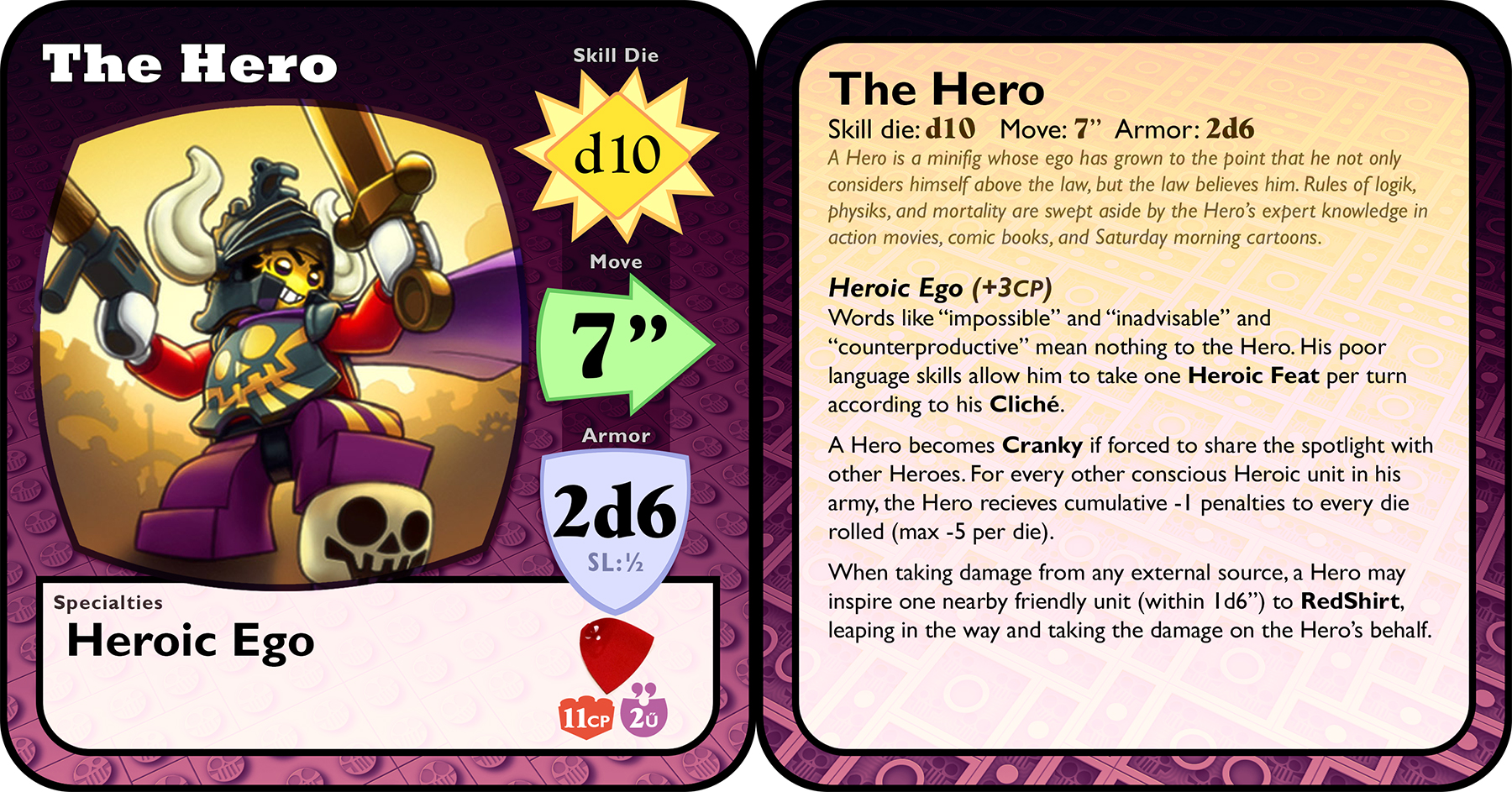 An Officer is a minifig who likes to boss other minifigs around, taking credit for their successes rather than doing any of the actual work himself. Officers manage squads and have the ability to eliminate actions associated with squad movements. 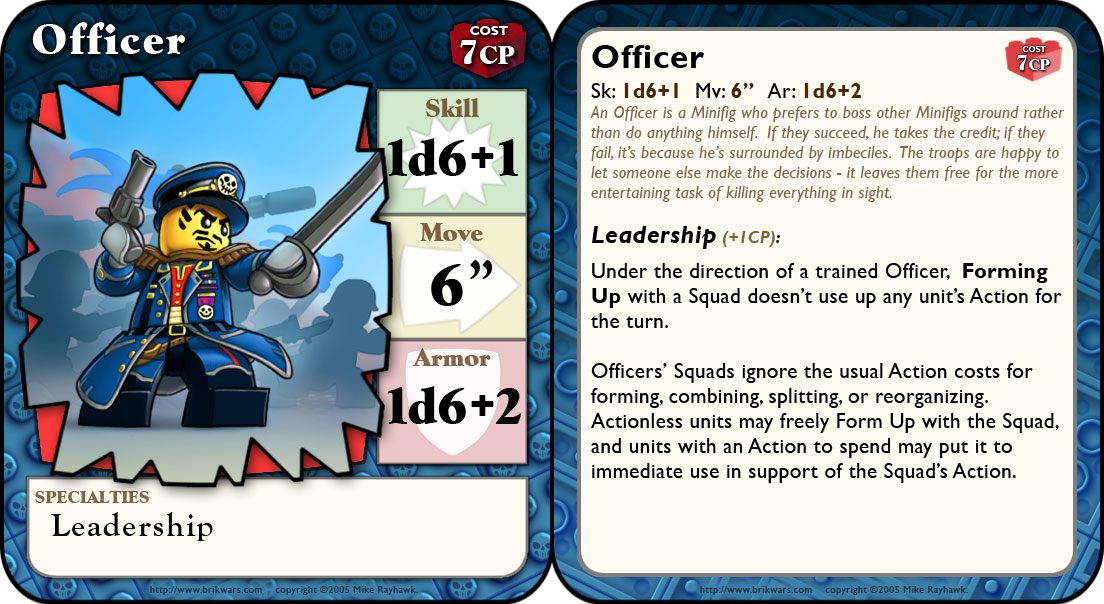 Gunners are minifigs who specialize in mounted weaponry. They have the uncanny ability to coordinate and focus attacks made with large scale ordinance and they can do so with unmatched skill. 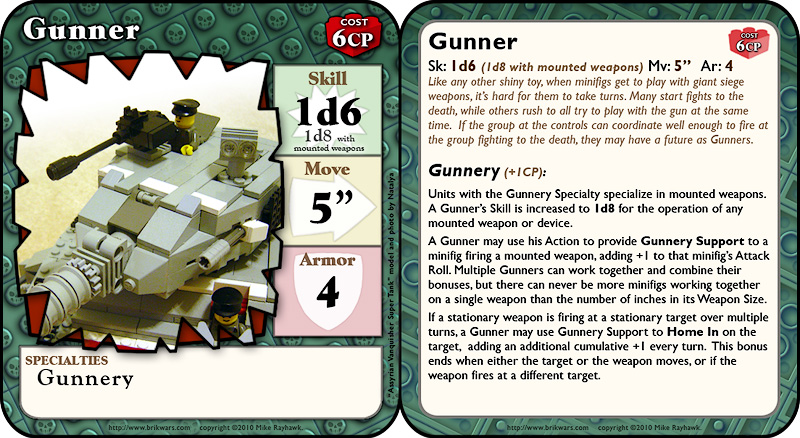 Heavies have a deep seated need to compensate for their insecurities and so, in typical BrikWars fashion, they compensate with bigger guns. Heavies have the ability to wield larger weapons than other minifigs of their size and thus, can bring much more destruction to bear. 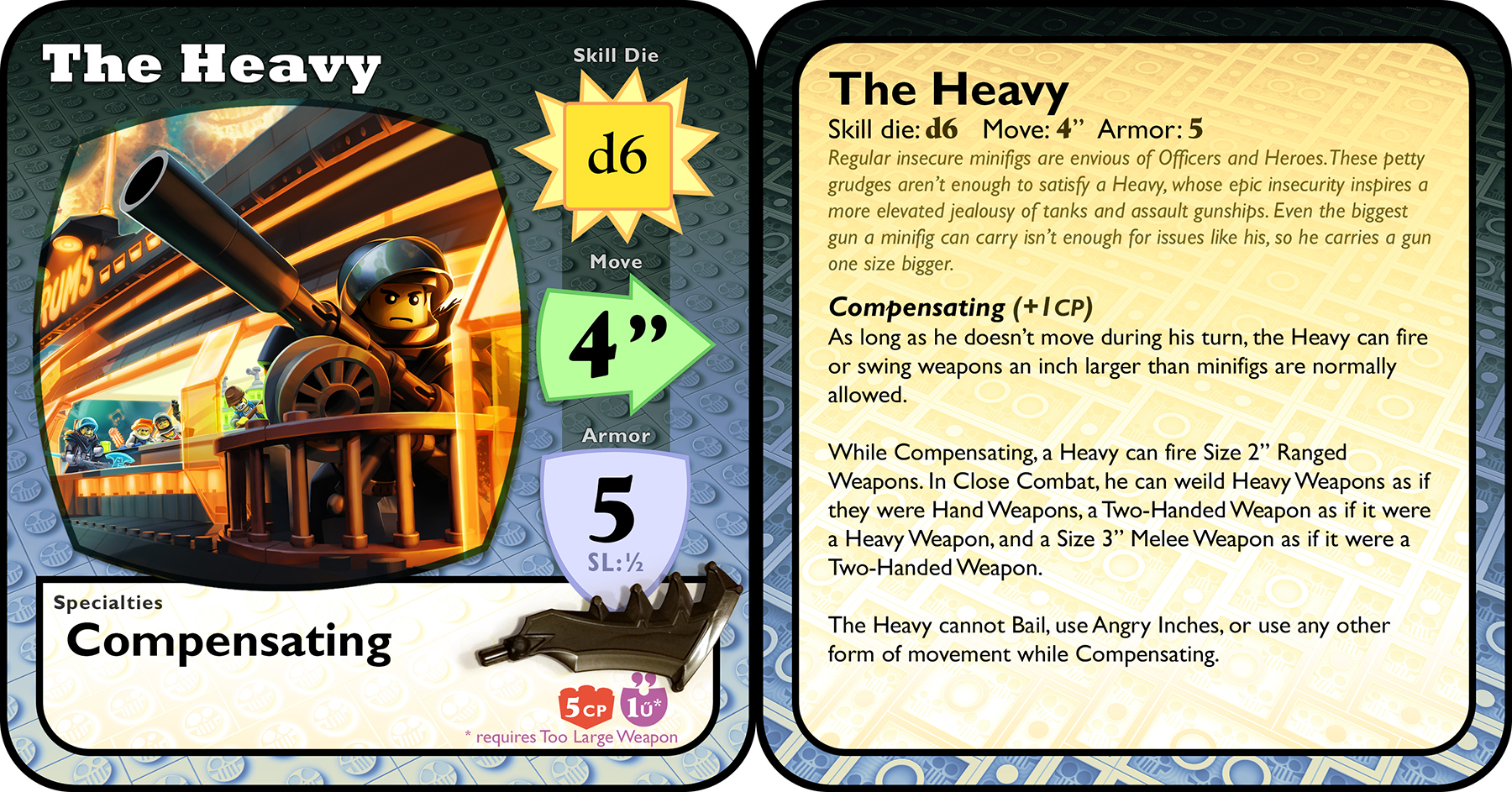 Scouts are reconnaissance troops, deploying to the battlefield in order to lay the groundwork for bigger and better destruction and violence. They have the ability to successfully navigate dangerous battlefields, cloaked and unseen, as well as to track and hunt prey. 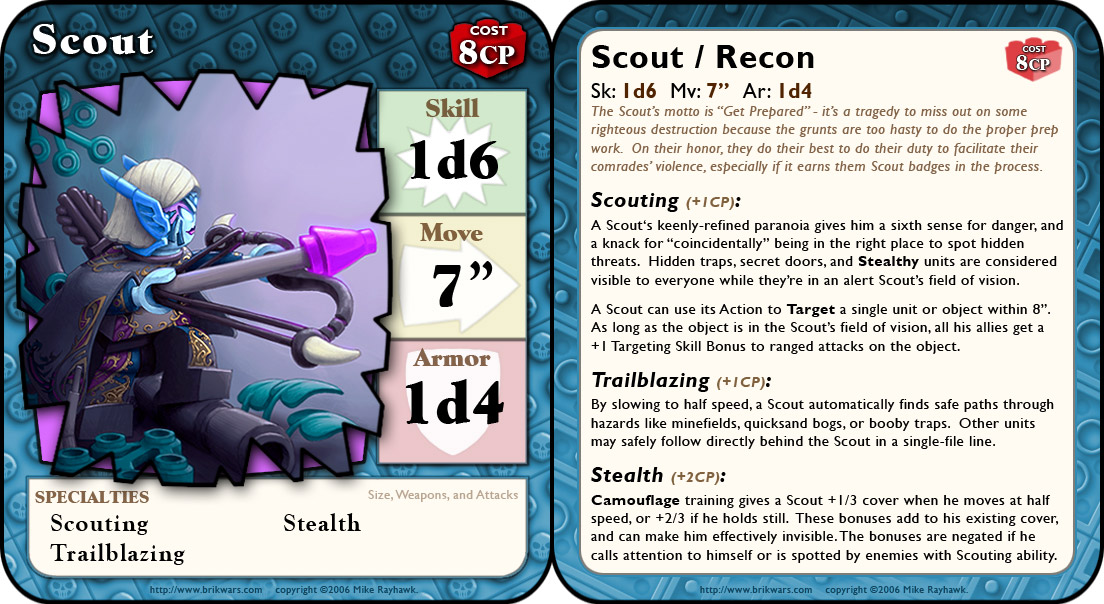 Mediks are the feared field doctors of BrikWars. They delight in reviving and operating on their still squirming, howling, and deeply wounded patients. Mediks eschew standard medical practices and engage in amputations to "save" their comrades. 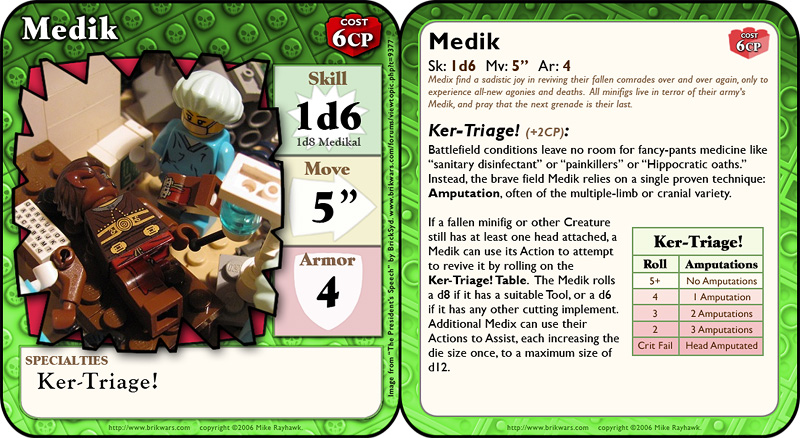 A Mechanik is a construction unit that has the ability to build, repair, and disassemble structures on the battlefield. Mechaniks never work when they don't have to, spending their time on an endless series of breaks, but most can't resist the allure of their shiny tools. 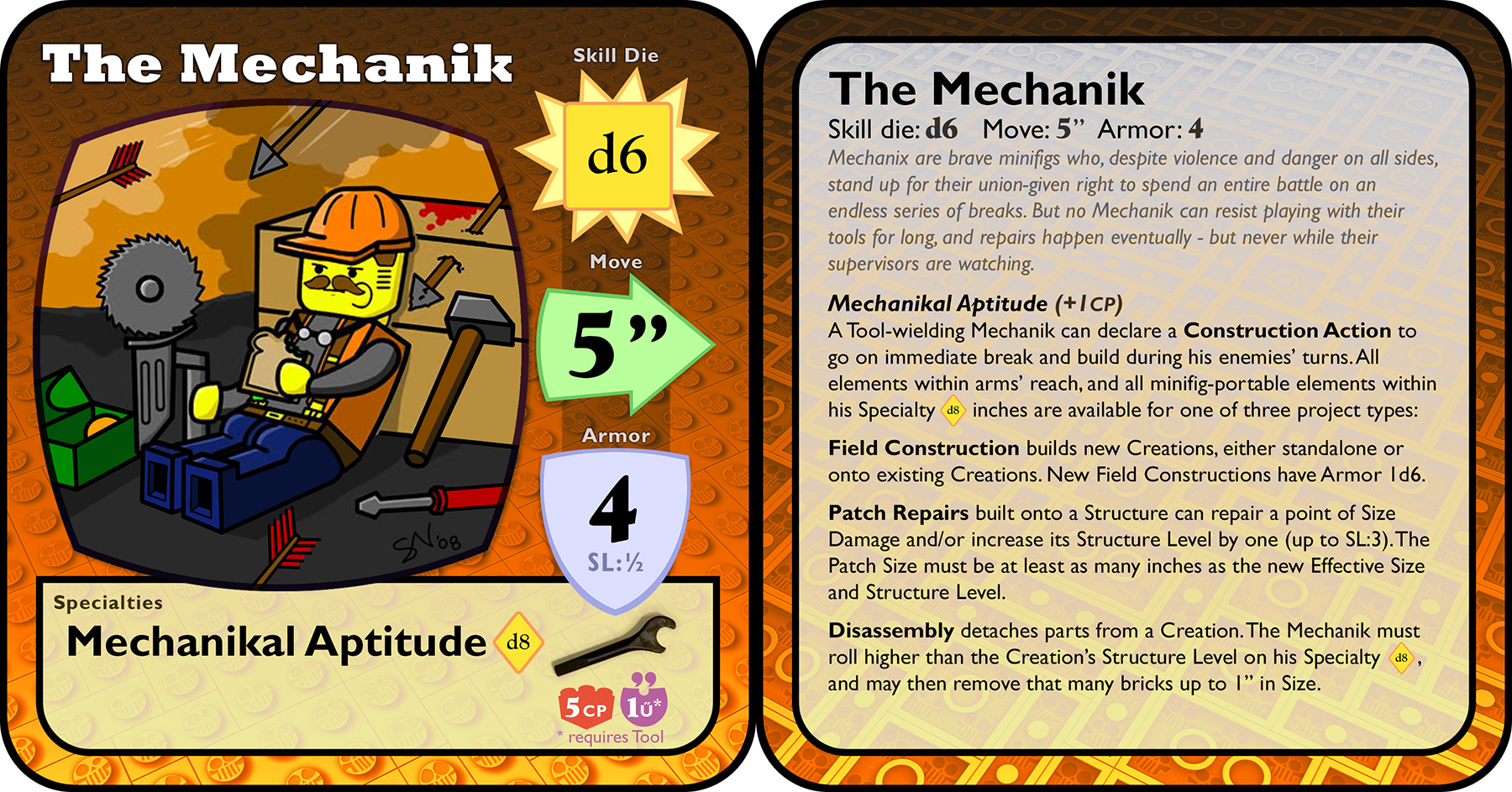 The Pilot, or Rider, is a minifig who has dedicated her time to the perfection of vehicular mayhem. They drive the beasts, mechanical or organic, that power through battlefields at top speeds, obliterating all in their path. Pilots have the ability to focus on driving without losing any actions each turn. 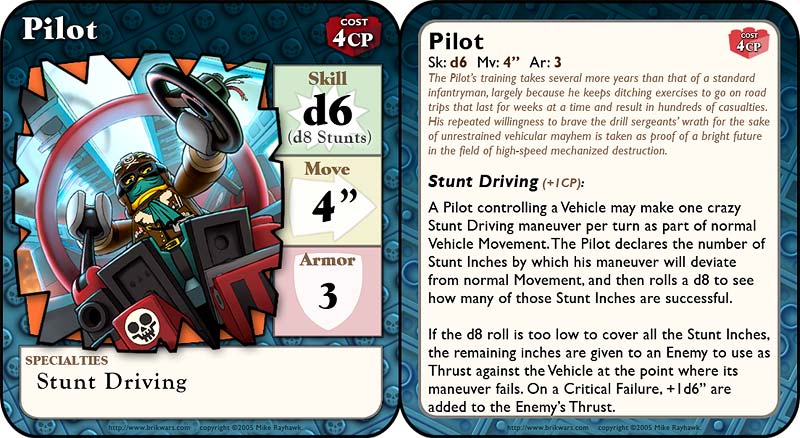