Daemons are monstrous, infernal creatures spawned from the very pit of BrikHell. That foul place is a veritable monster-making machine and it churns out new species of abominations daily. Cataloging the breadth of daemonkind's genetics would take a normal Daemon Hunter several lifetimes.

Typically, a Daemon lobbies for a position within the Nine Clans, hoping to become an overseer of one of the Nine Circles in BrikHell. Failing that, a daemon's second best option is to find a way into the material realm where it can amass power of it's own accord. The rest are doomed to fight over whatever scrap of territory they can get their claws (or tentacles, or whatever) on in the endless wasteland of their home dimension.

The following are Daemons who have been encountered and cataloged by minifigs.

Blood Daemons share a supernatural bond with blood. They are naturally attracted to it and have the ability to shape it using daemonic blood magiks, or a form of Sanguinomancy. Most commonly, they create bodies and weapons from large pools of freshly spilled blood and it is for this reason that many daemonic scholars believe that they are, in fact, psychic creatures. While this idea also explains the blood teleportation that has been witnessed in some battles, it is still considered a fringe theory. The historical consensus is that the daemons have physical forms that require large blood pools and artificial daemonic portals for transport. 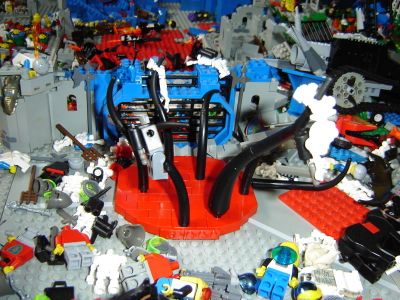 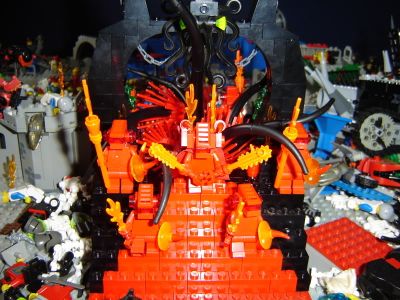 The Old One and six Blood Daemons step from the still churning pool, shortly followed by the rest of the Daemon Pack in Zombie Zulu Dawn.
Retrieved from "https://brikwars.com/wiki/index.php?title=Daemon&oldid=7273"
Category: