For Great Justice, Part 1: Tower of Justice Round Three

Extras: Each team earns +1 CP at the beginning of Round Three. The Warden offers a new deal: Pay 1 CP and advance your initiative one step. Players may bid as many CP as they like. This will take effect at the start of Round Four.

Reminder: The Stasis Chambers will provide you with a reinforcement. Each chamber only has one, though, so whoever gets to it first gets the guy. You'll still need to spend CP to equip him, unless you have extra equipment you can give him. Feel free to take the Warden's Second Offer but remember that CP can also be used to buy specialties, supernatural dice, and equipment, if appropriate. 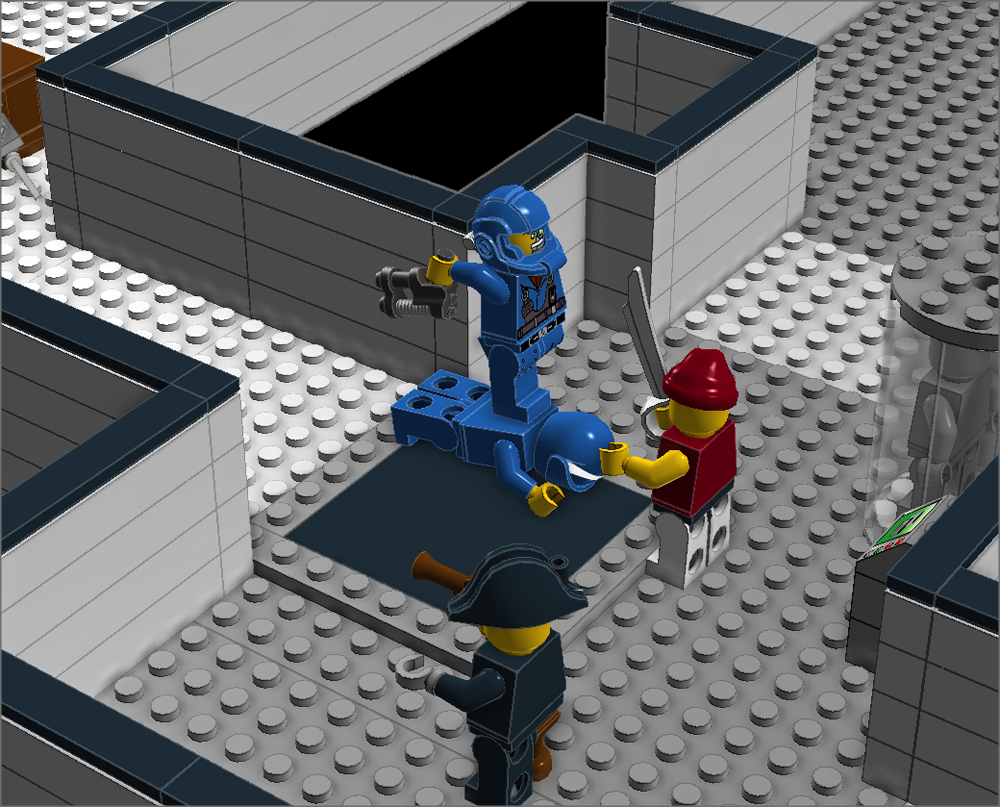 Blue Android rushes the pirates and triggers an Impossibly Deep Pit Trap. His shotgunner leaps forward to save him and Android makes it safely over the hole. The shotgunner and his weapon disappear into the pit however. 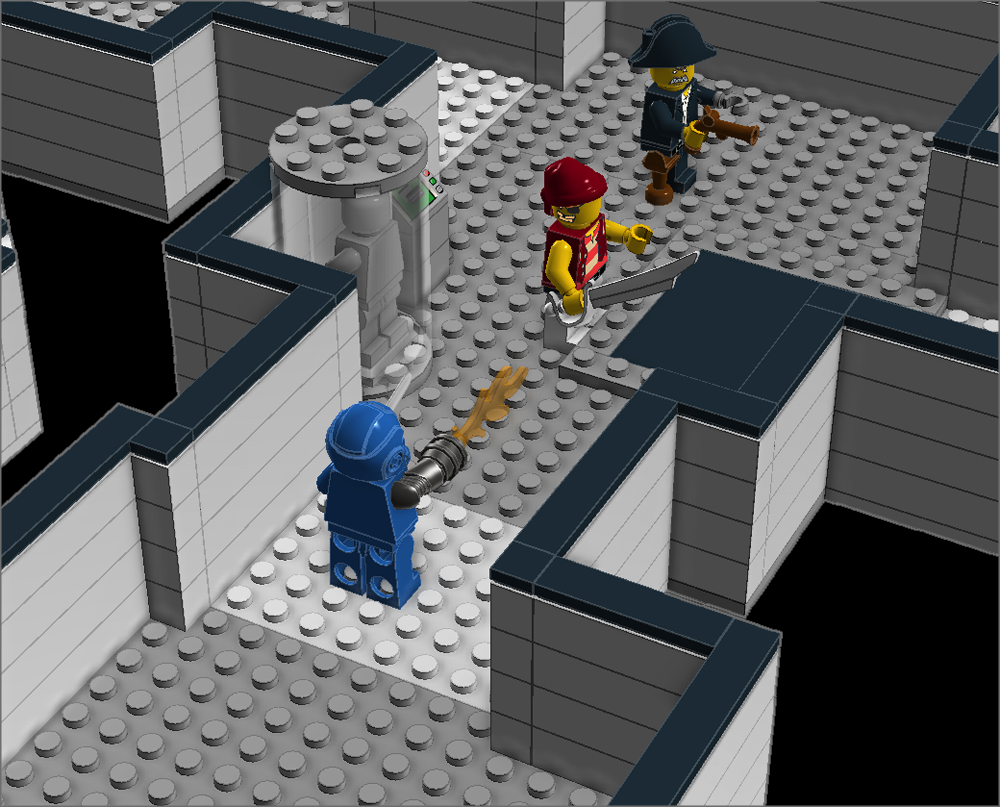 Android dashes into the adjoining hallway and uses a Heroic Feat to transform his gun hand into a machine gun arm, which he promptly uses to open fire on the pirates. Unfortunately, he misses every shot. 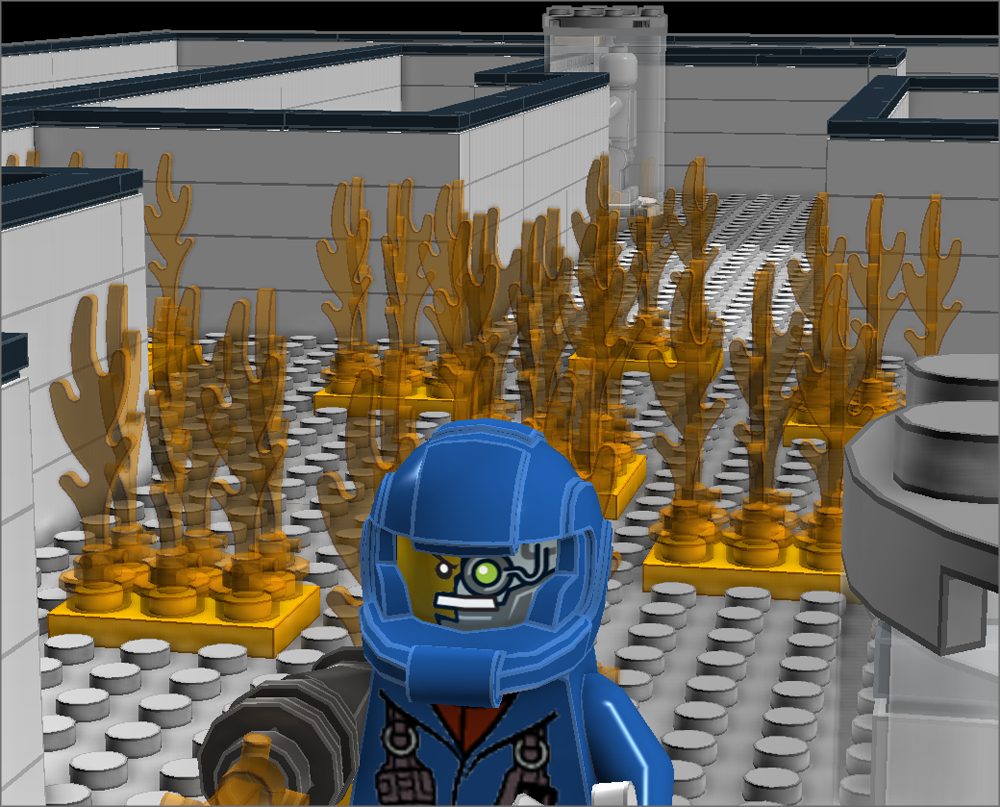 Flames burst to life in the next room from previously hidden grates in the floor. 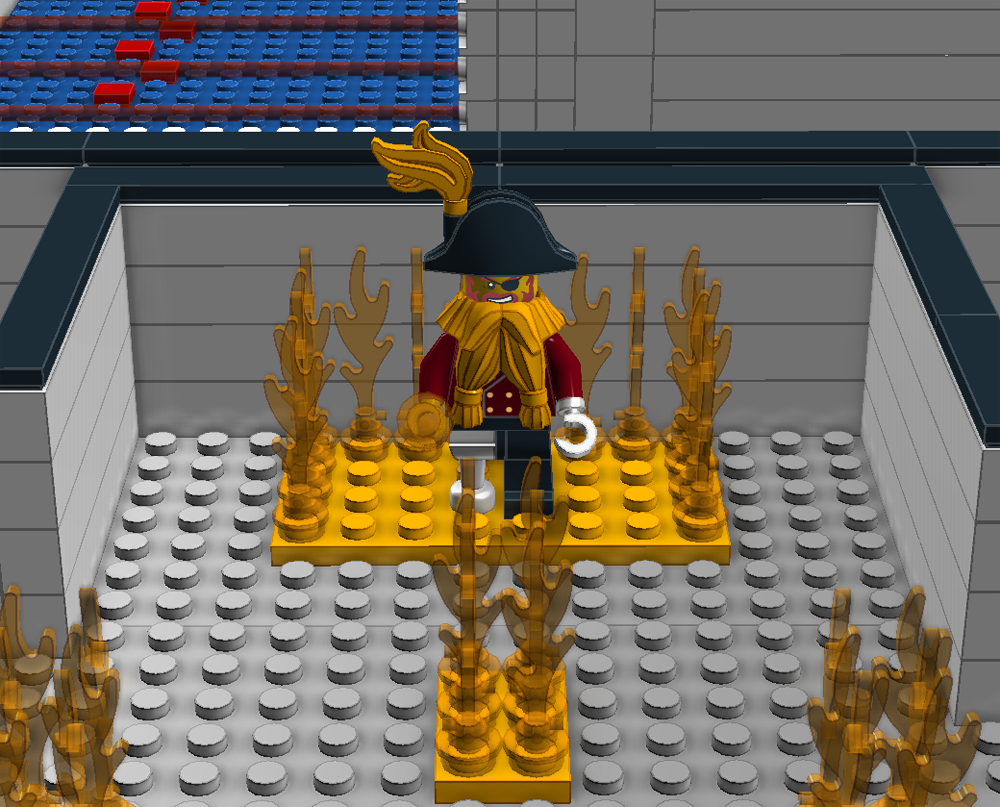 From the largest of these emerges FireBeard, the fearsome Pirate Lord. 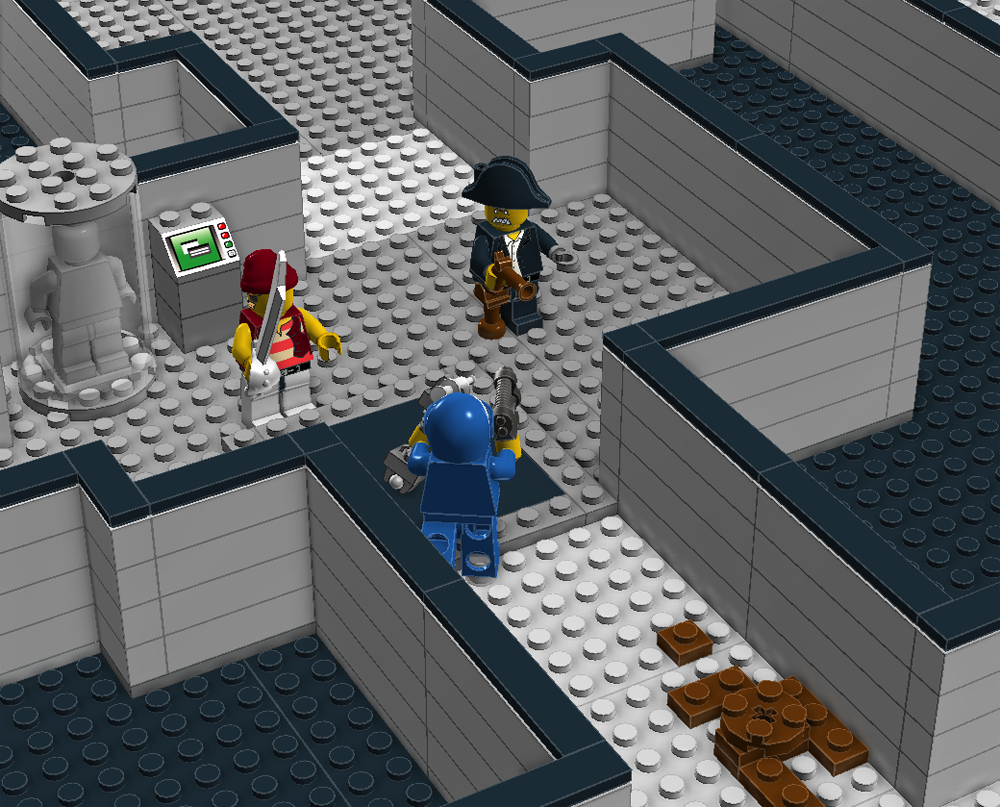 Blue’s Medik moves toward the room at stops at the edge of the pit. Shotgunner is too far gone to recover, so he pops a shot off at the pirate captain. It goes wide. 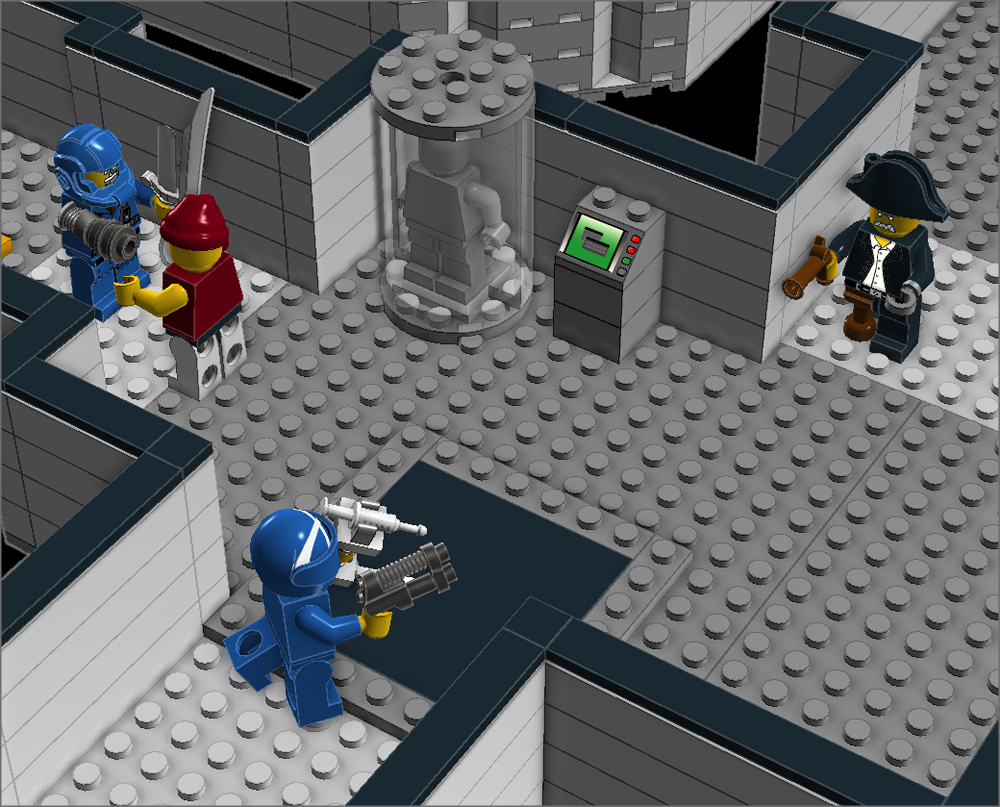 Red pirate leaps into close combat with Blue Android. A lot of posturing occurs. Similarly, the captain backs into the furthest corridor, taking cover from Android and firing a shot on the Medik. The shot bounces harmlessly off of the man’s helmet. 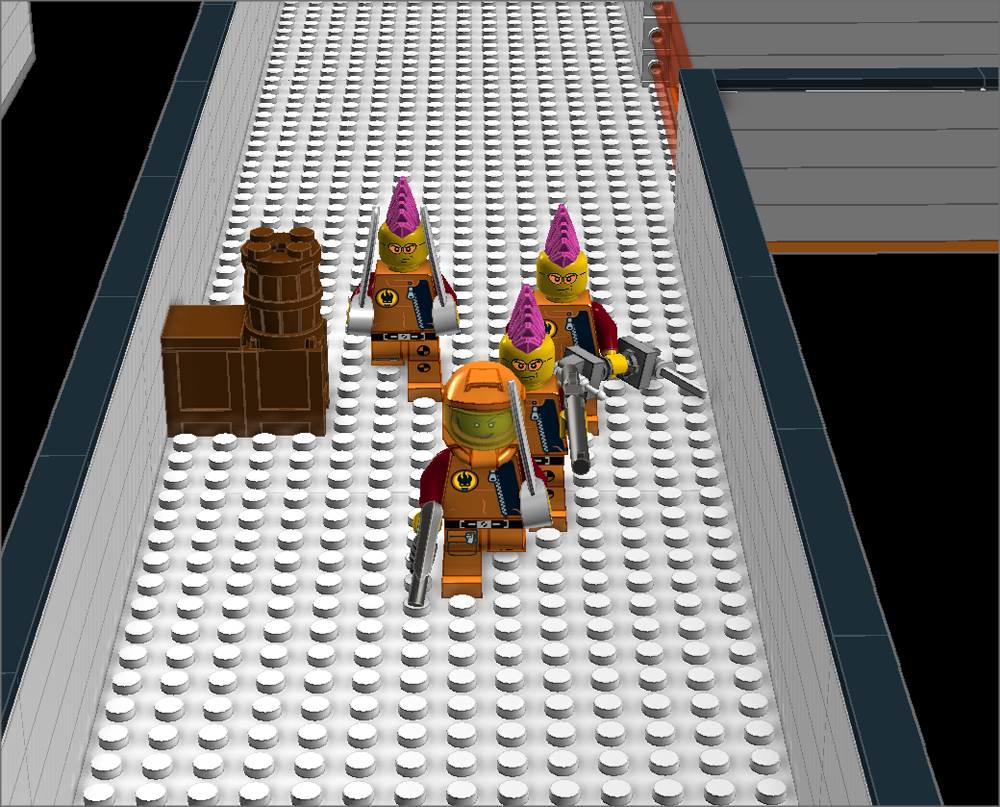 Orange Team moves confidently down the main corridor, forming up with Spy in the lead. 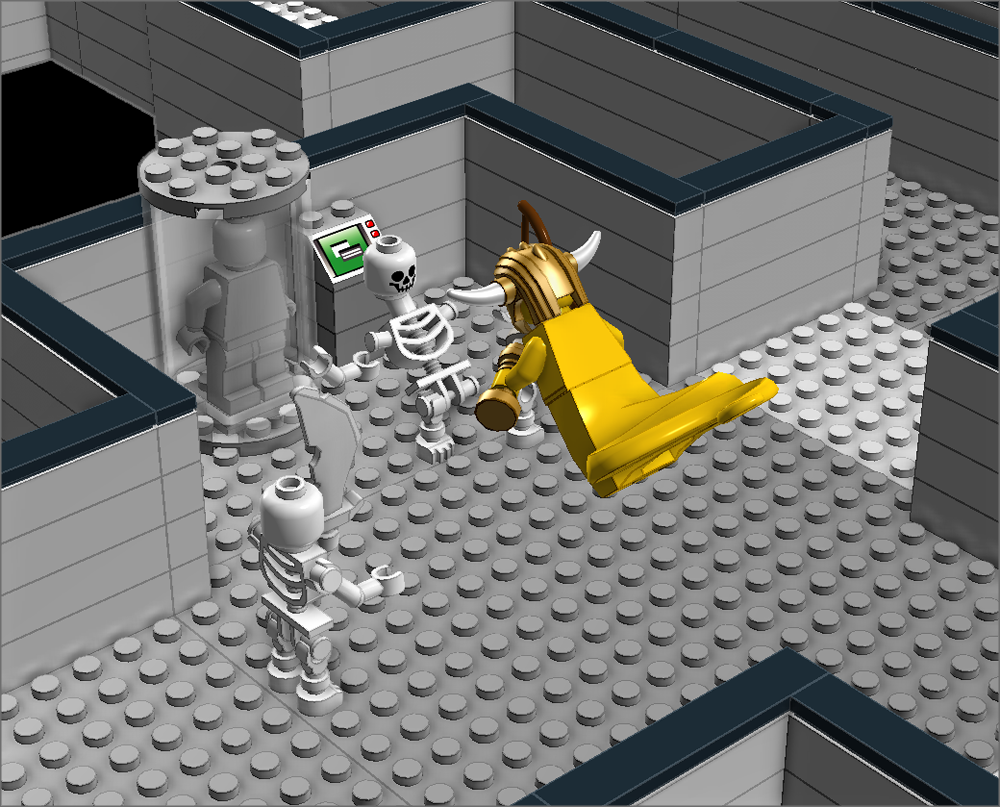 Snake Yellow uses his snakelike body as a coiled spring and launches himself forward into the Skeleton Archer, shattering it into pieces. The Hero stows his Poison Shiv and grabs the bow. 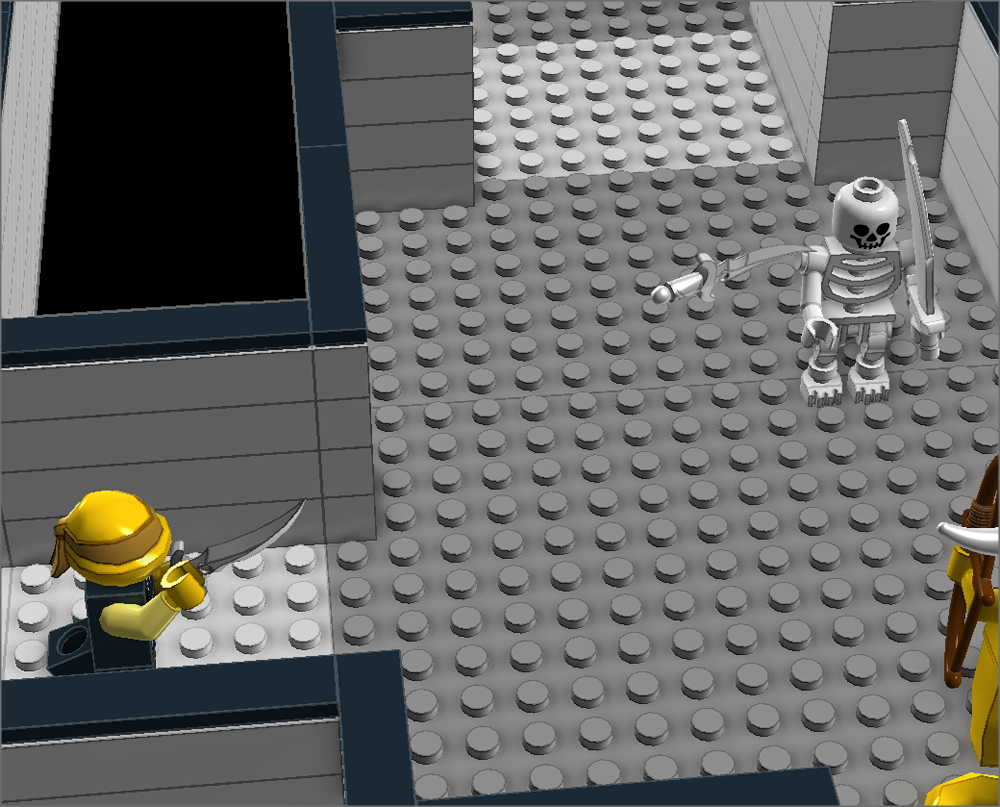 Mr. Daggers moves into the room but, finding himself too far away to attack and too off center to charge, he decides to throw his dagger at the remaining Skeleton. 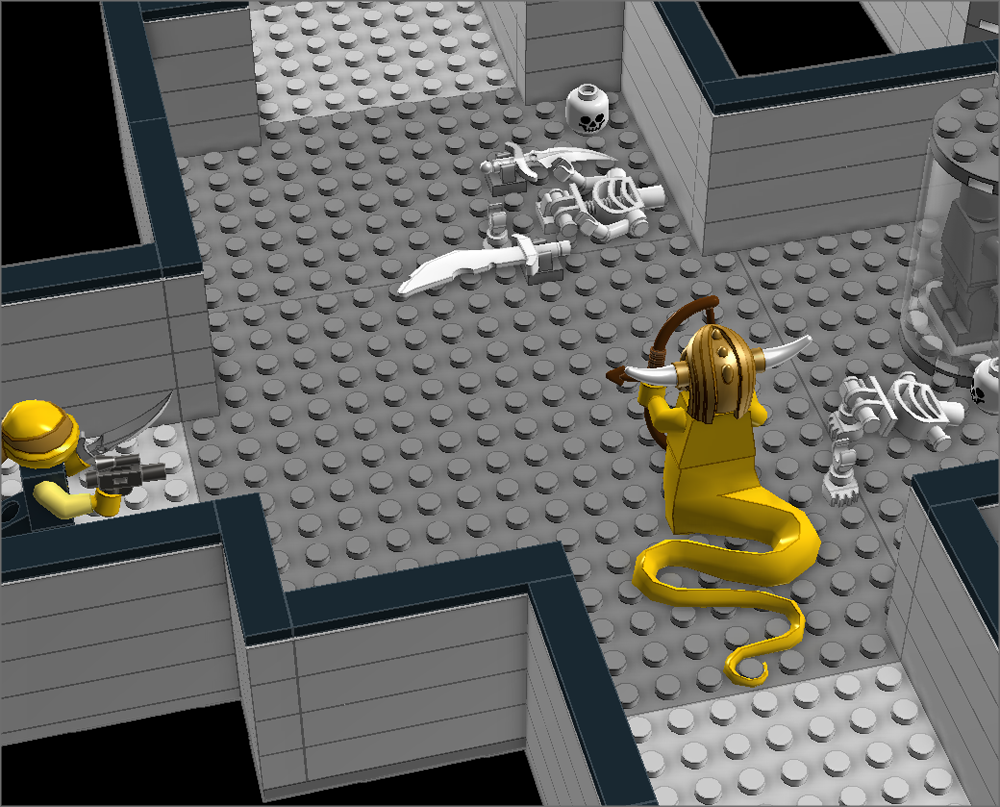 He overskills like a son of a bitch and cuts the skelly’s head clean off. The force of the blow shatters the rest of it to the ground. His dagger and the skelly’s sword lie on the ground amid the bones. Snake Yellow tosses the pathfinder his pistol. 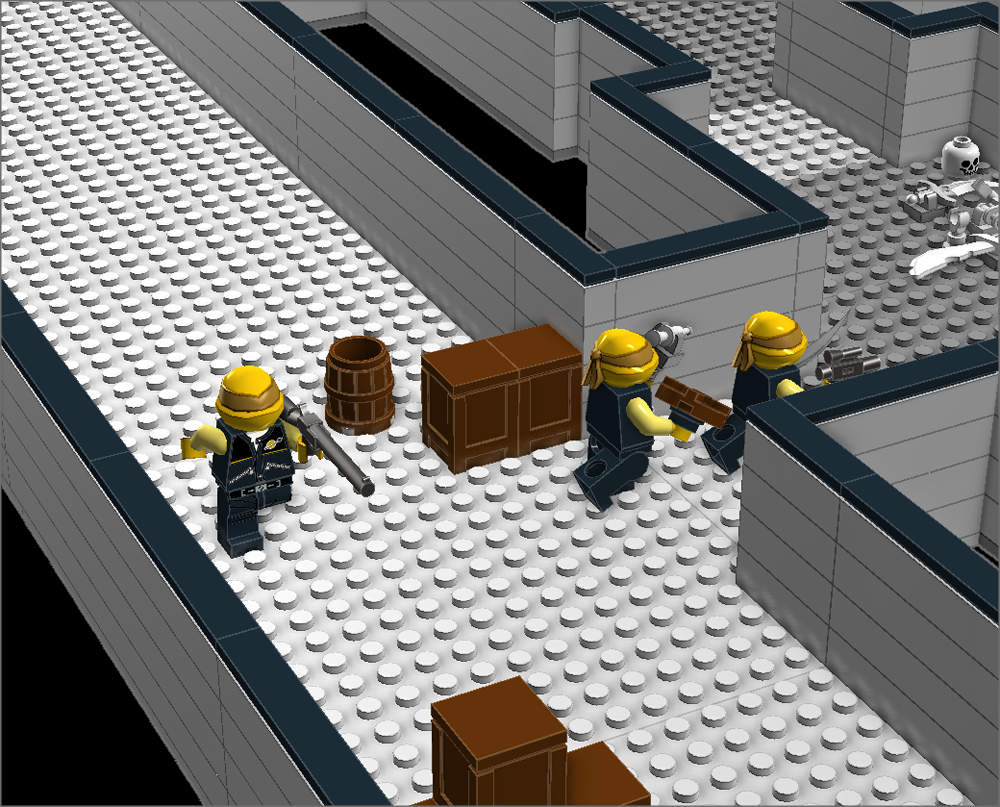 The Medik moves up behind Mr. Daggers and the shotgunner legs it down the main hall. 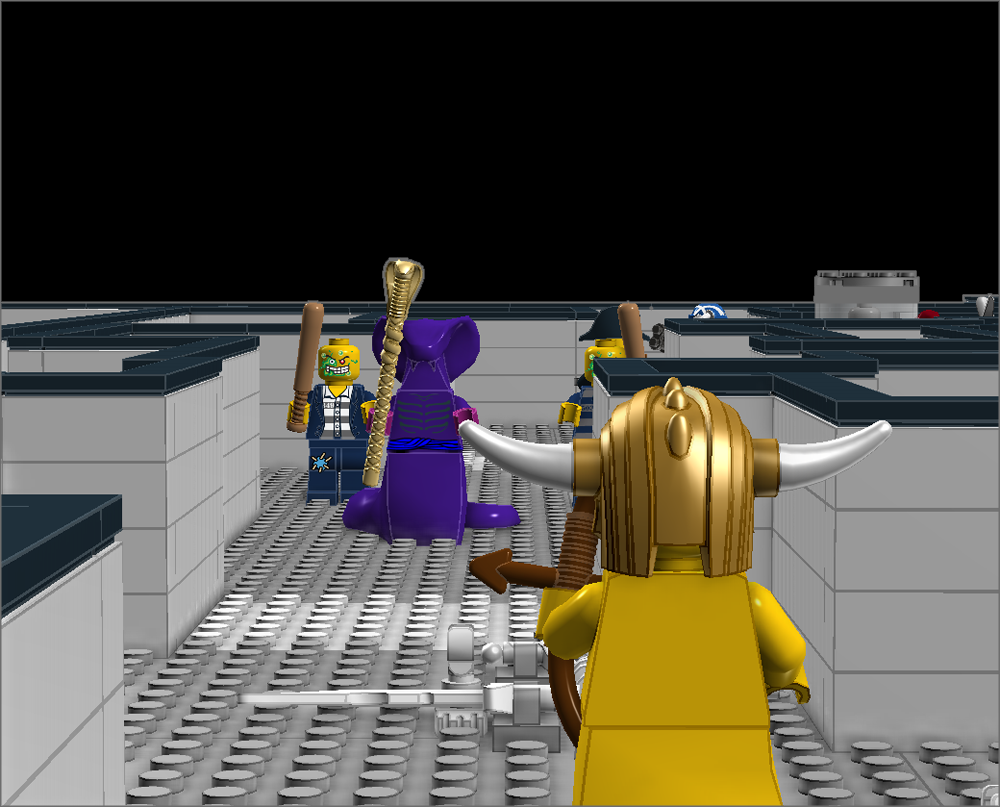 Snake Yellow looks up into the next room. Uh-oh, what’s this? It looks like the remnants of the prison crew who followed the Snake King that Yellow defeated and took a tooth from. They look pissed. Wonder how they got in here. 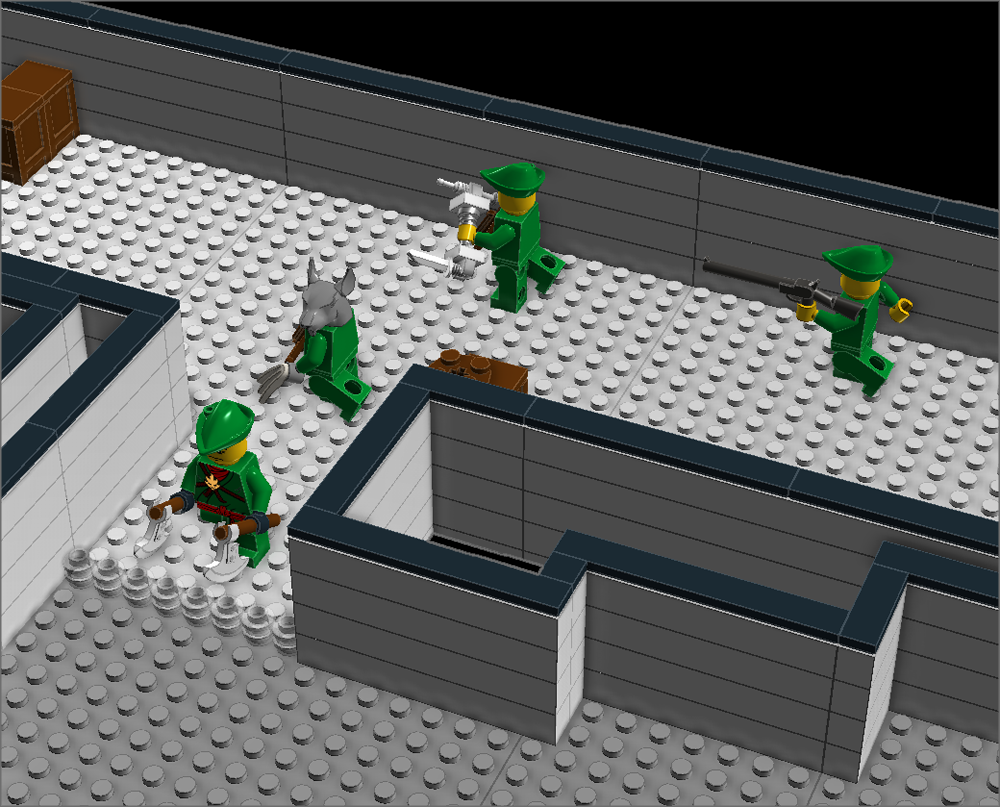 Green Team rolls to their feet and sprint to catch up with their pathfinder, who takes a look around the corner into the first room. The pathfinder detects a hidden spear trap across the threshold. 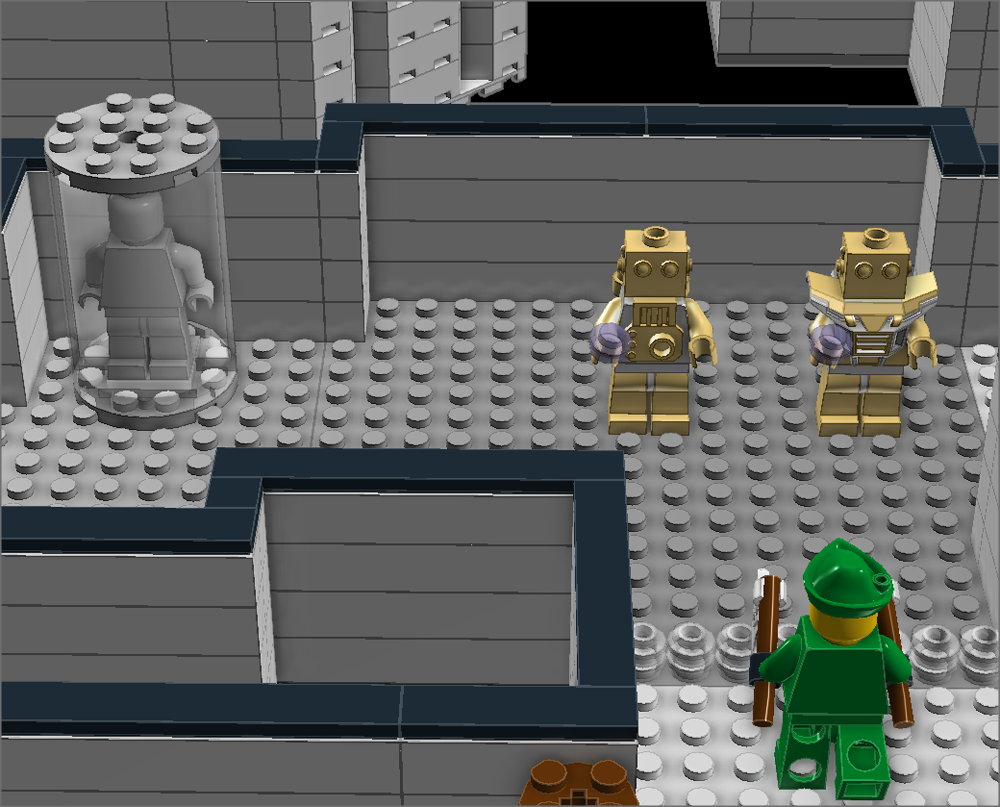 What’s more, he spies two robots standing guard here over a Stasis Chamber! He’s confident he can get his teammates across the trap but eyes those golden bots warily; they’re charging up some kind of electricity bolt. 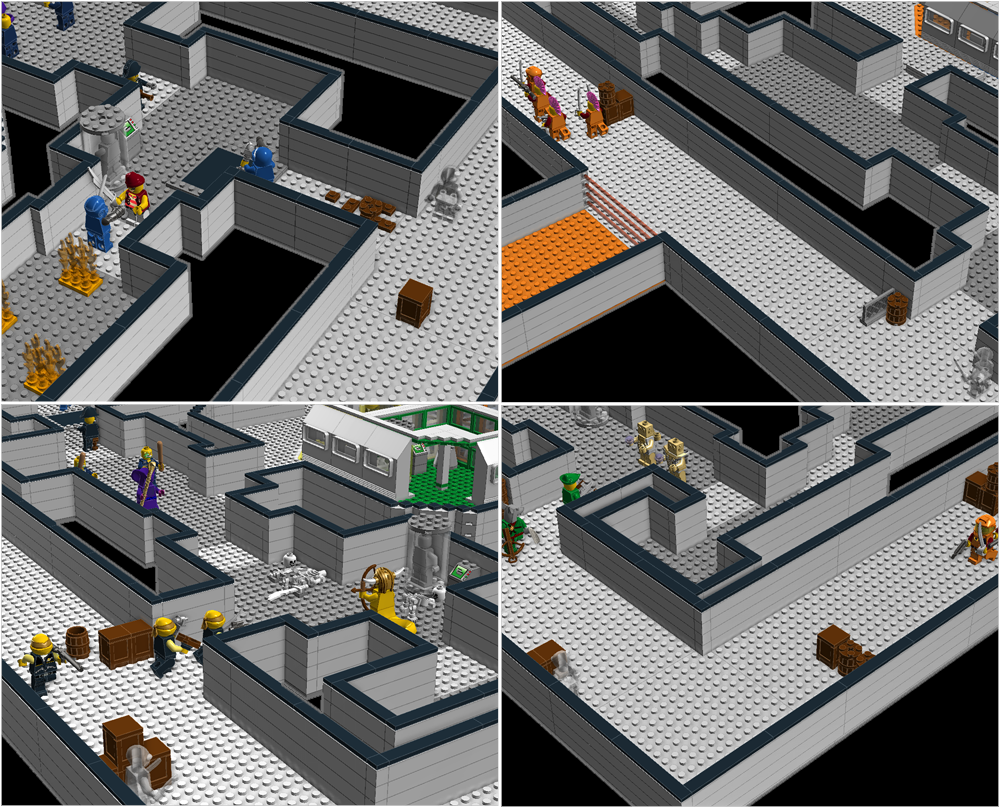 Unbeknownst to the other players, Grey Team enters the battlefield at the four corners of the map. They quickly dash into position, each coming up on the four colors. One looks to be in the free and clear, as his color, the Orange Team, has moved in the opposite direction. However, this puts another one at deep risk, as Green and Orange close in on him from both directions. Each Grey is cloaked in supernatural power. 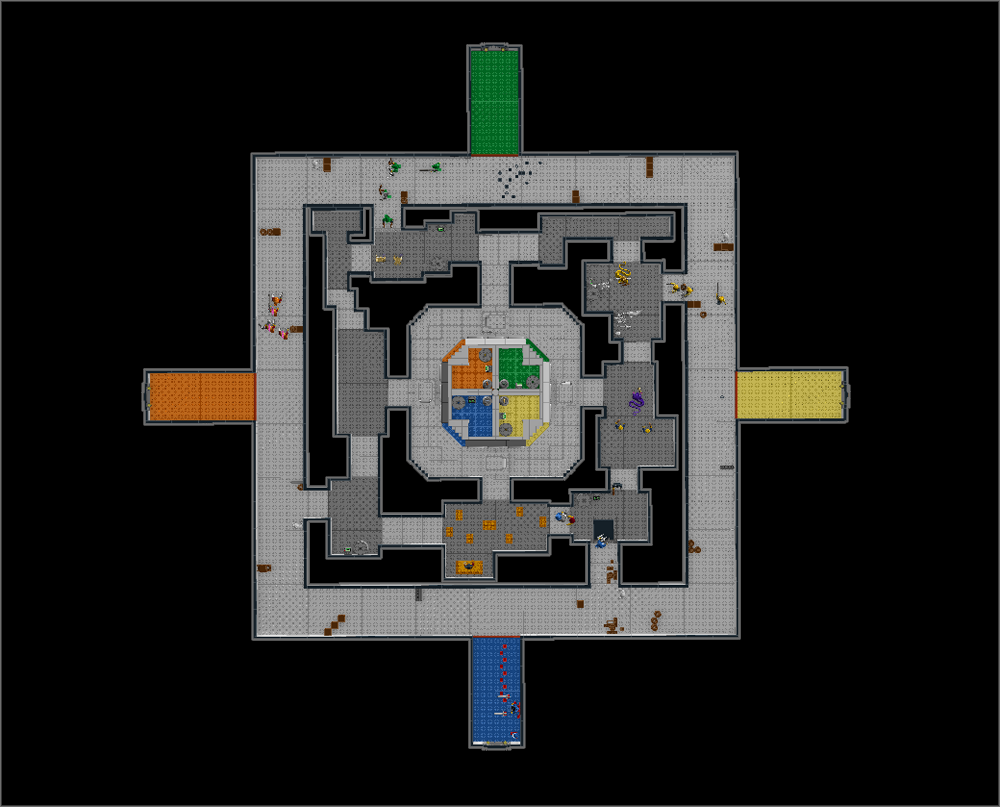 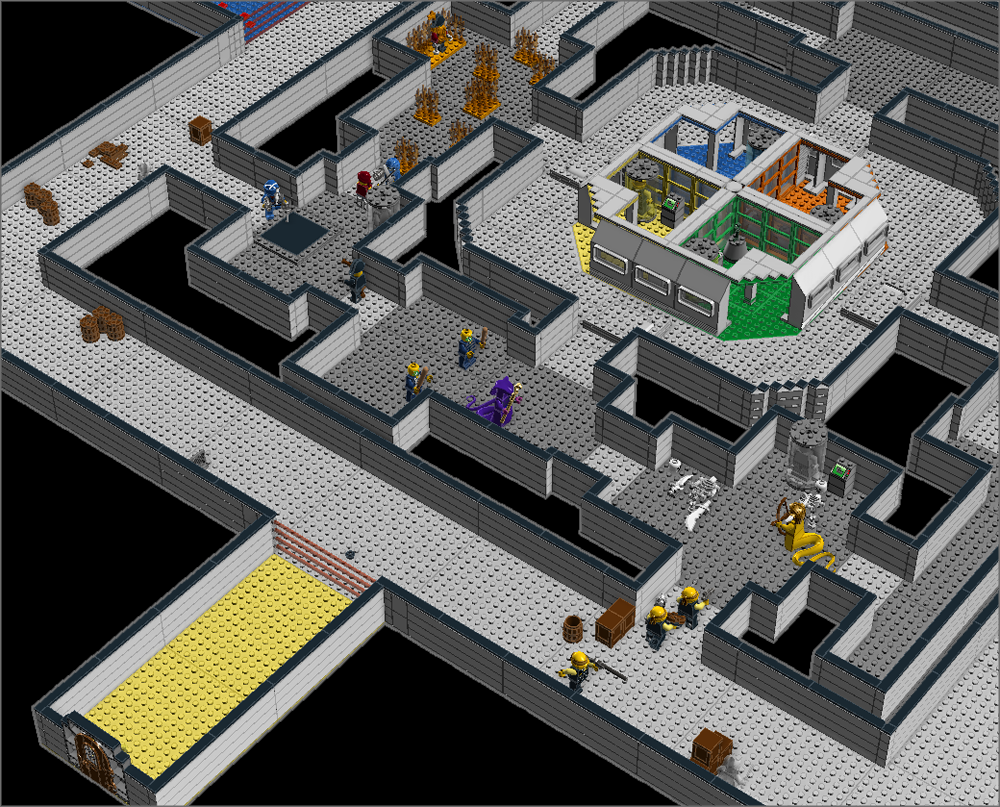 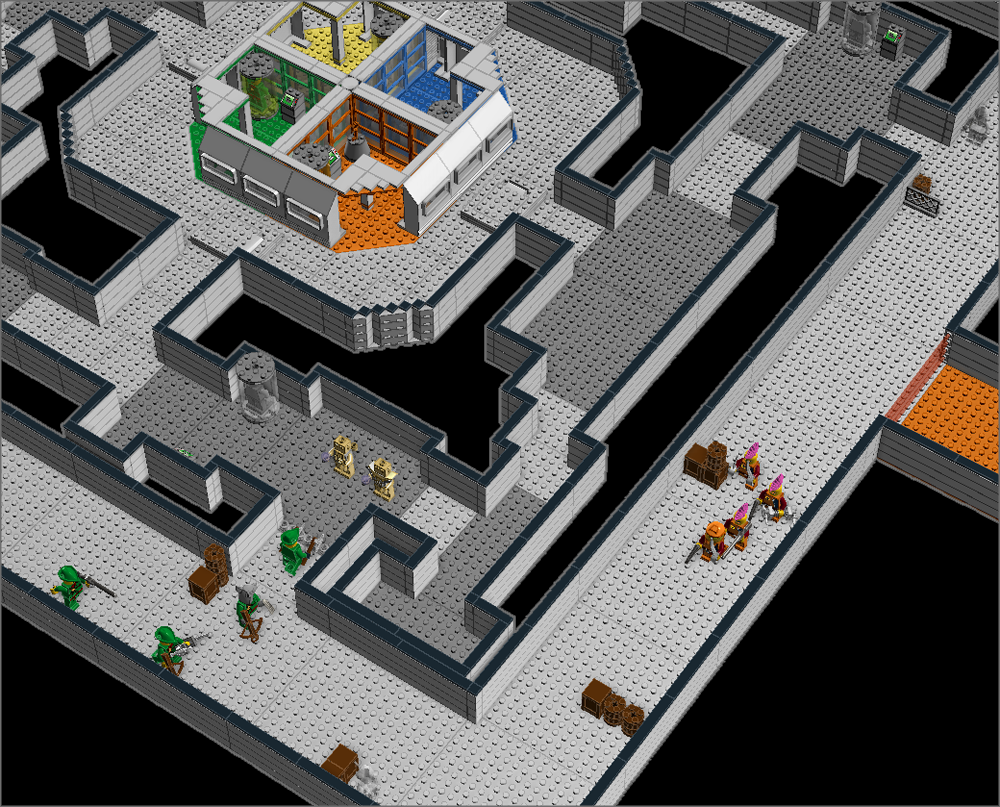