It's basically a feudal society on a Galactic scale (no I wasn't going for ideal here). There are essentially five classes, Royalty, which consists only of the King and his immediate family, Nobility, which consists of those born into families that were assigned governance of planetary regions by the First of the Galaxy Kings, the Military, Artisans, and everyone else. Nobility is split into three sub-classes, High Nobles, or those Nobles given their right to nobility by the Galaxy King himself, consisting of Archdukes (only five), Dukes, and Marquesses; Regular Nobles are those Nobles given their nobility from High Nobles, who assigned out fiefdoms of their own land in order to better govern the vast amount of planets they have under their control. Regular Nobles consist of Counts, Viscounts, and Barons. And the bottom of the rung for the Nobility are Sub-Nobles, consisting of Magistrates, appointed by a Noble to govern a planet, and Governors(technically governors are sub-sub nobles, but this technicality is overlooked), appointed by a Magistrate to rule a region of their planet.

The X-57 Slepnir Assault Hoverbikes are on the far left, directly next to them are several regular troopers, wielding standard heavy laser assault rifles. On the far right are a few heavy troopers wielding heavy laser/plasma shotguns. In the front commanding the unit is a Templar (still haven't made the templar's standard weapon yet, on my to-do list), flanked by a commando (guy with the serious glare off his helmet) and a Dragoon.

A Paladin of the Greyscale (the official name of the military of the dominion, for their color scheme of black, white and grey), one of those brave and highly trained warriors who ride the X-57 Sleipnir into battle. The Sleipnir is a highly advanced medium-armored hoverbike, outfitted to fully complement the Paladin's primary purpose, which is to wreak havoc across battlefields at high speeds. It is outfitted with six precision laser targeted missiles, and a medium strength laser repeater at the fore of the bike. Powering it is a large OT Hoversaw, which gives it high speed, excellent maneuverability and serves to shred to pieces any figs unfortunate enough to get in its way. However most notable about the paladins are their signature OTC Novalances, used to shred through infantry, hardsuits, and even cut open the sides of armored tanks, the paladins are a force to be reckoned with on the battlefield. 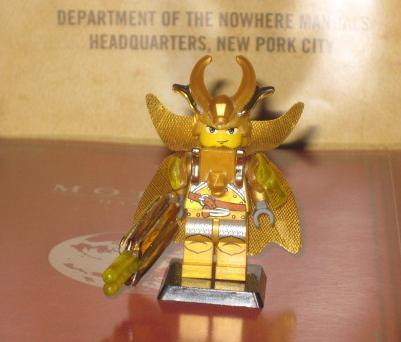 Galaxy King Ernie himself, ruler of the Galactic Dominion. However, a warrior born and not one for sitting about idly like many of the nobles serving under him, Galaxy King Ernie is easily one of, if not the strongest fighters in the entirety of the Galaxy and regularly fights alongside his countless warriors. Shown here wielding the Birthright of the great line of Ernie, Excalibert, the GodBlade.