The Grey are a remnant Empire, once mighty, terrifyingly teknologically advanced, and spread thickly among the stars. Now, they survive in scattered clusters across the breadth of the BrikVerse. It is unknown what brought the downfall of the Grey. Many simply theorize that it was ancient forces that broke them but some historians insist that the often reckless and single-minded Grey have no one but themselves to blame. The Grey are a Hunter culture. For them, there is no finer achievement than the trophy of a particularly difficult kill, cleverly stalked and thoroughly defeated. Everything centers around it. Elevation in society occurs almost only for the most accomplished hunters. Science and teknological advancements typically only occur to further the ends of what they call the Great Hunt. Even when Grey gather together for survival, it is rarely a defensive gesture. Instead, they gather in Hunter Cadres and seek only the most dangerous prey. 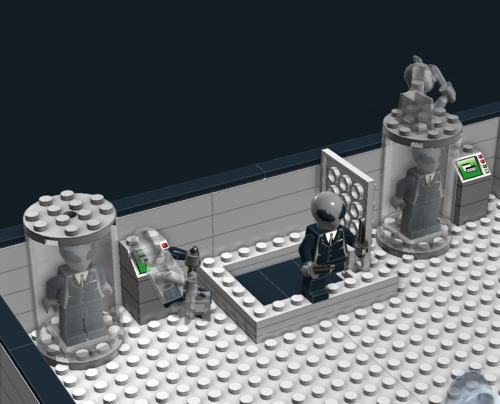 Perhaps the most well known attribute of the Grey is their universal ability to Phase. Phasing allows an individual Grey to shift slightly out of alignment with the BrikVersal dimension. While Phased, Grey occupy a temporary pocket dimension overlaid on the realverse. The two dimensions are still connected and experience time flow and similar events simultaneously. Functionally, this ability allows the Grey to move about unseen and to move through solid matter as if it weren't really there. Much of Grey teknology expands upon this natural ability, amplifying it to provide cloaking fields for vehicles or large groups or weaponizing it by using it to destabilize living matter. Again, Grey Tek is almost exclusively developed to aid them in stalking, hunting, and killing chosen prey.

Grey tend also to use ritualized weaponry. Often no more special than regular weaponry in terms of structure and ability, the Grey nevertheless treat their ritual weapons with reverence. Sometimes, individual Grey will seek out assistance in upgrading these weapons with magik or high end teknology, particularly if they have possessed them for a long time. The Hunt is always more important to the Grey than lost or destroyed weapons, but most of them will make a concerted effort to recover ritual weapons once the immediate hunt has passed.

In addition to the above, the Grey mastered cloning teknology long, long ago. By and large, it is almost exclusively how they reproduce. Overall, there appears to be a kind of cultural apathy toward these processes and cloning facilities are often only maintained as a matter of convenience (almost always to replenish Hunter Cadres during difficult hunts). They seem aware of the importance of maintaining some semblance of a population, though, so remainder funds are often funneled toward obtaining cloning materials and maintaining the scant few labs they still possess. And if there is any kind of defense minded awareness about the Grey, it's toward their cloning facilities. They don't seem to personally care much about them but they dislike intensely the idea of anyone else getting their hands on them.

The Grey were originally developed in collaboration between BrikWarriors Scratch and Quantumsurfer for use in The Chronicles of Doom. They are designated as open for use under the Community Content Guidelines.

The Grey are most well known in the BrikVerse for their participation in the exceedingly popular Far-Ums gameshow, the Tower of Justice. Many Grey travel to the Doom Moon of Dis to take part and hone their skills, though some eschew it entirely in favor of a more "real" experience. The gameshow rakes in an absurd amount of gains and the clever arrangement of alliance treaties and business contracts the Grey have with the royal sovereignty of Dis, the Far-Ums Network, and Dissonance Industries and Entertainment, allow them to make a great deal of profit. If the Grey have a "central government" anywhere, it is there centered around Dis in the Nehellenium Galaxy.

Still, the Grey near Dis are representative of only a small portion of their populace. As mentioned above, the Grey mostly exist in Hunter Cadres but many of them also serve as mercenaries in order to fund their hunts.