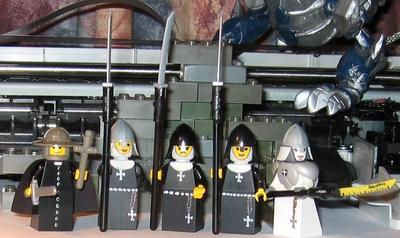 The Purification Sisters of St. Attila arrived on Dinoreich five years after the Britannic League had formally laid claim to the large swampy and damp forested region surrounding what has now come to be known as the 'Lost Valley'. There had been a rumor that the Holy Sisters of Divine Retribution were to have been sent to Dinoreich instead, only it seems that they were more urgently needed elsewhere and no other missionary order was willing or rash enough to set foot on Dinoreich.

It didn't take the good sisters long to establish their mission station in the thriving trading town of Despond close by the banks of the Brackish River (yes, that really is its name). Before the sisters arrived, the town was noted for the considerable number of bars and drinking establishments on its main street, but the sisters created such an impression that several of the more notorious establishments' owners generously donated all the building materials from the demolition of their premises to the construction of the mission station and chapel before they hurriedly left town.

At first there were some small misunderstandings until the good sisters learned that a sentient being with two heads and a number of tentacles just might be a good Christian (though possibly a Protestant) and a citizen from one of the more strange League worlds and not a demon after all. Fitting a stronger lock to the door of Sister Mary Constance's room also helped with this.

There certainly was plenty for the good sisters to do. There were children to teach, though at first much of the young novice Sister Christian's time was spent chasing them down with a large net in hand around the alleyways of the township before classes could begin beneath Sister Hazel's baleful gaze.

There were sick and injured to tend to, even if some of the injured may have acquired their afflictions from the Mission station's superior, Mother Mary Pugilista, the previous evening after attempting to sneak out the back door of the local house of ill repute.

Whoever they might be the sick and afflicted were well cared for by a quiet and thoughtful sister who soon came to be known as the 'White Nun'. However for those who thought their invalid status permitted them to touch instead of merely remaining spectators in their bed of sickness a sudden and painful shock awaited them. With a cry of, 'None of that!,' a stinging blow would be struck upon the wayward limb with a long stout wooden ruler that just seem to appear in her hand as if by magik. This was the blessed weapon named the 'Rulerbokken' that had been gifted to her, according to the other sisters, by St. Attila herself who visited the White Nun in a vision during an intense time of prayer and fasting before she embarked for Dinoreich. However Father Peter O'Connell her confessor is still puzzling over her strange wild tale of a man with a burning skull and somebody not clearly identified who seemed to be named 'Stubby'; - but of course under the seal of the confessional Father Peter must keep his silence.