The Fuse is Lit

The Fuse is Lit

But on the second moon of the gas giant Quelos, the mysterious figure known as Warhead began to take advantage of an opportunity that had presented itself before him.

A group of dice-worshiping cultists had amassed a large fortune in their treasury. Warhead demanded they turn over the gold to him or suffer the consequences.

"The taking of this gold will bring nothing but misfortune upon you!"

"Your primitive ways mean nothing to me, old man. I have fought countless battles and devastated innumerable worlds. Nothing can destroy me! Not even your misplaced beliefs."

"Now, which one of you will go first to meet your cube?"

"Sir, I must protest. It is forbidden to plunder those who have declared their loyalty to the crown. These people have done nothing wrong and need to be left alone."

"What are you doing? Commander War-"

"My thanks Captain, but you have no need to inform me of the law. I am the law."

A cultist shot Warhead from behind and knocked the crown from his head.

"Impossible! That blood can not belong to me! ARGH!!"

"Is this how you repay my kindness?!"

"You want your pathetic gold back? Here! Come and take it!" said Warhead as he flung the chests at the cultists.

"The dice have rolled in your favor for now, but there will come a day when retribution and sacrifice will be demanded of you!"

"There are no dice!"

Back on Avalon, the High Chancellor, Semaj Nagirrac, heard of the catastrophe on Quelos II and demanded Warhead to return immediately.

"Put yourself in my place, Commander. Everyday I search as hard as I can for an heir to the throne. I've nearly come to the realization that the ancient Rites of Rulership may need to be invoked in case a candidate of worthy blood is not found. But that's not all! There are alliances to be made, trade agreements to be brokered, and suddenly I hear that you have slaughtered an innocent group of people, under the crown's protection, and that you have also murdered your personal bodyguard!"

"May I ask what was going through your mind at that moment?! Do you have any idea the amount of damage you have caused?!"

"I have served long enough without proper compensation. It was time to call in my debt."

"It wasn't you that did any of those things. It was me!"

"So, now we see the pretended modesty of the great Semaj Nagirrac run out."

"You say that you do your best to find a new king. Well, I know better than to believe a flat faced lie such as that."

"It is you that plans to wear this crown next! I've known all along of your pathetic scheme to usurp the kingdom for yourself!"

"You go too far, Commander. Surrender your weapon and return to your quarters. You are hereby placed under house arrest until summoned to your trial."

The cold blood of Warhead boiled beneath his skin. He knew without a doubt that he could kill Nagirrac where he stood. But he knew that there were elite guards just outside the door that would be able to kill him just as fast.

"Very well, sir. I'd hate to cause more embarrassment to our good name."

"After all, I'm only a commander. What would I know about carving out an empire?"

Warhead's feigned loyalty was enough to convince the High Chancellor that an escort was unnecessary. He was allowed to return to his quarters without being encumbered by the guards. However, Warhead began to put a plan into effect to remove the High Chancellor from his position. Permanently.

"You know the man's weaknesses. Exploit them in preparation for my arrival. I want him to writhe in agony as I draw the last breath out of him."

"We have taken the little upstart before. He will not be able to resist my temptations of death again."

Later that day, Semaj began the short walk from his office to his home. 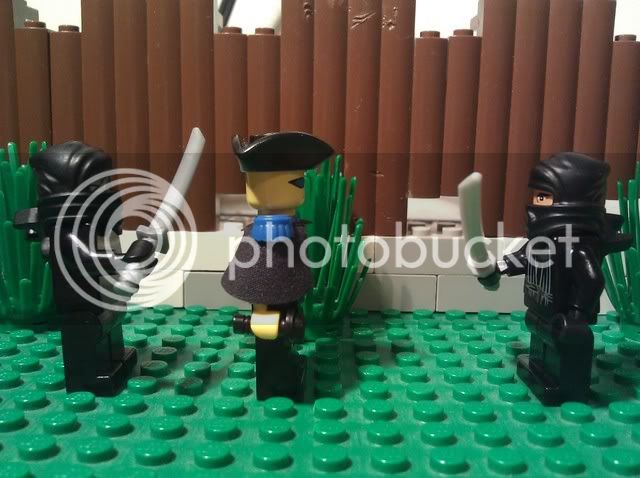 But an old enemy manifested himself from the shadows.

Semaj drew his beam saber quickly, but failed to realize there was another assailant behind him.

"Oh Nagirrac. You never will learn will you. The master has missed your presence. It will be a joy to watch him work again."

"You and your master are cowards."

"Says the man that kneels before me. Mwa ha ha ha ha!!"

"Impossible! How did hey find us here?

"Don't think this is over Nagirrac! We will meet again!"

"I owe you my life, but I do not know who you are. You carry weapons like mine though."

"Naturally Semaj Nagirrac. We are light siders. The guardians of that which is good and light. We apologize. Had we known of the dire circumstances on your planet, then we would have come sooner."

"I don't understand, gentlemen. There is nothing here that we can't handle."

"You don't seem to understand. How much do you know about Warhead?"
Top

Han Solo wrote: Hokey religions and ancient weapons are no match for a good blaster at your side kid.

This is a great saga, and I can't wait to see the next chapter.
This sig is too fucking large: show anyway

mmm, yes, another wonderful installment. these always keep me wanting more. wonderful work, and I especially love the face makeover Warhead gets after killing the peasants

This story is just badass, and I really loved this chapter of it as well, ace job sir!

I decided to make a page for the Brikwiki. Here it is.

It only contains history up to the Liberation. Let me know if there's anything I should add. Thanks.
Top

The Avalonians have just become even cooler

Note: this information is classified and unavailable to other space factions as of yet.

The Kingdom of Avalon requests a full military and trade alliance with your glorious nation. With your military expertise and our resources, we have no doubt that you will benefit from such a lucrative relationship.

The Inquistadores kidnapped many of our subjects during the Menggu Invasion and while we are mounting a task force to rescue them, we admit that we lack the intelligence necessary for an operation. With your experience and technology, we believe that a joint operation between our nations will result in a victory for our alliance.

In return, we will provide you with a new, up to date navy and as many units as you require of our elite soldiers. In addition to the navy, we will allow you full access to our economy and allow you to establish mining operations on select planets.

Your Majesty, we humbly ask that you review this proposal most carefully and choose the most beneficial option. We may be without a king for the time being, but we are a strong and industrious people.

We are honoured by your request, and, as it seems, you have already been faced with the brutalities of the Inquistadores. Thus we need not warn you of the horrors being faced with the vicious Immortal Alliance evokes. We are in no position to refuse a kind offer of aid from another neutral faction, and our diplomats have already begun to prepare for a meeting between both our honourable races.

Trade may be difficult to establish with our outer systems under enemy control, but we will do everything possible to establish a route. As soon as our diplomats have finalized our bond, we will dispatch one of our elite units, who will have the necessary intelligence and skill to free your people from the Inquistadores' oppressive grasp. The Ghost Division will see your people freed.

May the Farce be with you

- Konrad I, Emperor of New Prussia

Semaj just handed me everything I needed to finalize the concept for the second battle in the Prussian campaign. Unless he's going to host something himself, this can give you a pretty good idea on what the next (Prussian campaign) forum battle is going to entail

[quote="Comms from Grand Leader of the RIN, codename "Commander""]As a fellow son of Prussia, I urge you, Avalonians and Neo-Prussians, to join us in the mighty third alliance! Help us cast off Immortal oppression! Help us conquer the Brikverse!
*End comms*[/quote]

Comms of Otto Von Bavaria wrote:Konrad, Semaj. Join us, the RIN, the Akkadian Empire, the Brickville Union and the Fynnlunders in the third alliance. All members are manufacturing superpowers, so we can not only rebuild your fleet, but we can expand upon it. We will not only liberate your men from the Inquistadores, we can expand both of your civilizations in size, power and tek level.

Right now the Third Alliance is a force to be reckoned with. We have the elite winter troops of the Fynnlund Imperian, we have the mecha of the RIN, Piltogg of Akkadia and the fleet of Bavaria.

Join us, and the brikverse will usher in an age of German ingenuity and leadership.

You know what you should add: links from the wiki article back to the associated forum threads.

You know what you should add: links from <a href="http://brikwars.wikispaces.com/">the wiki</a> article back to the associated forum threads.

I'll get right on that.