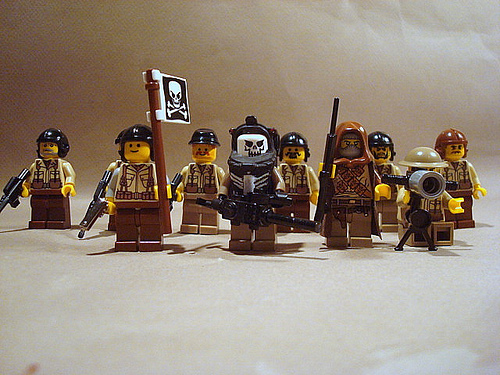 Austzechia is the nation, controlling the well defended world of Thereck. They have been looking for more planets to control, as their technology develops. Austzechia is well known for it's uranium ore deposits, and incorporate it in much of their technology such as fuel for steam engines.

Austzechia has a single command bunker, Compound 1 located at the center of their planet “Thereck”. Command is linked through outposts and forts, then to the main cities. The main cities are regulated by the military, as police forces are not required for the non-existent crime.

Also command is linked to Thereck’s airspace, and the planetary defense system. Command can regulate trade, and can identify specific enemy nation ships. The Planetary Defense System views main threats to the planet, such as enemy fleets, meteors, and any other threat found in space. They can then activate a system of defense turrets and satellite cannons to remove such threats.

Austzechia is run by Chaplin-Austin, who makes all decisions for Austzechia. He has complete control of diplomatic, war, and government in Austzechia. He generally likes to meet any diplomatic missions personally, as he can handle himself if situations break down unlike a representative would. Although he has so much power in Austzechia, he is not corrupt or power hungry and leads Austzechia under his best thoughts.

Thereck is the planet under Austzechia’s control. Thereck’s land is about 55 percent desert, 39 percent grasslands, and 6 percent Dead-lands. Thereck is called a “wasteland” planet because of it's large deserts and radioactive uranium deposits. Water is extremely important on this planet and almost every city on the planet is stationed by a lake or river. Depending on the area though, water must be filtered and boiled due to fallout and uranium dust.

The Dead-lands are scav and zombie infested uranium civilizations. The mutants worship the G.T. making massive underground cities in the uranium mines. These mutant figs used to be raiders and slaves, forced to work without proper protection. Once exposed to the radiation, these figs mutated and became the scum of Austzechia.

A group of scavs on Thereck

Austzechia’s main threat is the scav and zombie hordes located in the deadlands. Major wars have been set upon these mutants, but they seem to come back stronger than ever. Obviously Austzechia must monitor the mutant threat at all times, and be prepared to crush them if they try to attack. Peach nations and space pirates and the main enemy nations that Austzechia has to deal with, but Austzechia is almost always of defense as their fleet is not large enough at this time to try to destroy one of these nations on their separate planets.