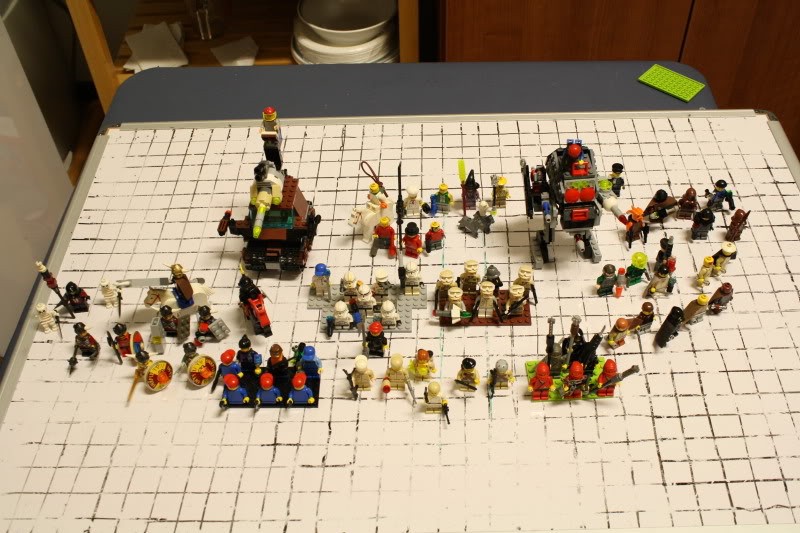 An overview of B.E.S.E. forces.

The Brik End Space Empire(Hereby referred to as the B.E.S.E.) was originally several smaller factions that shared control of the planet known as Endumus Prime, the largest among them being kingdom of Brik End. Originally, the planet had no real countries or nations; only tribes and loose conglomerations of primitive people vying for control over the world. These people fought one another day in and day out, hardly ever pausing.

One day, a minifig stood up amidst the violence and said enough! This man was the Baron of a tiny province that was part of a tiny, tiny kingdom of savages. With a group of renegade soldiers by his side, armed with new, experimental weaponry, Baron Fredrick Von Pwyll ousted the only king of the largest of the small factions from power. With the help of the people, Baron Fredrick Von Pwyll created true civilization. He founded the first real town, trained the first professional army, and even tamed the first dog. Pwyll raised a son in his kingdom, and from atop the Great Table he had built his new home on, he saw all things that went on in his land and governed it well. He led his people into a new age of new technology and new things.

One day, however a threat appeared. From the southern deserts came the first sign of trouble...raiding parties. Pwyll's supply caravans were raided many times by different groups of bandits, and Pwyll's own caravan was once assaulted by a group of the bandits. Men and women died and the losses began to become a larger problem.

Pwyll knew what he had to do. Up until that point, the only real protection the place now known as Brik End Kingdom had consisted of a band of mystics armed with primitive laser swords, a witch, a wizard, and a well-trained but poorly equipped militia of some fifteen men. Pwyll would have to manufacture more weapons, draft more men, and build ships that could withstand the bullets and blasts of the desert bandits...

Pwyll would have to go to war.

With the help of a newly constructed shipyard and the minds of his finest Mechaniks, Pwyll constructed two airships, both armed well and capable of carrying troops. These two ships had no commissioned names, but were the first non-wheeled war machines built on the planet of Endumus Prime.

After constructing his ships and drafting more men, Pwyll charged off to meet his opponents. One battle turned to many, and soon Baron Pwyll was locked in a long war, later named a civil war after facts about the origins of the bandits came to light. Pwyll eventually slew the bandits, at the cost of his wife and many of his finest men. The war was over, and his kingdom was unified. Brik End Kingdom had been born.

Some time later, after the militia had been formalized into a proper army(and navy/airforce), Pwyll set to work establishing diplomatic relations with the other factions on Endumus. Many were small and had become peaceful. These readily joined Brik End Kingdom, figuring they would be safer under the protection of Pwyll and his army. Some factions, such as the Black Knights and the Mountain Vikings remained separate for a very long, long time. In the case of the Mountain Vikings, they replied to the offers from the B.E.K. by sending their messengers' heads back in boxes.

In BR 2,008, though, an event happened that would change Endumus and unify its peoples forever.

Halfway through BR 2,008, Brik End Kingdom launched its first foray into space. With two lightly armed frigates and one colonization ship, the B.E.K. set out to colonize the stars.

Soon after their ships left the atmosphere and began to venture out, the Blokbots struck. The small frontier fleet could only hold off the Blokbots long enough for the B.E.K. to launch their newest ship, the Fighter-Carrier Whale. This ship held off two Blokbot assaults, but when the enemy fleet returned with an Epic Space Cannon, it was all over. The F.C. Whale was blown out of the sky, and the remaining ships fled to the surface, where they prepared for the Blokbot invasion.

Over the course of two years, the Blokbots decimated Endumus. They destroyed towns, cities, ships, and a whole bunch of other things that explode very easily. The B.E.K. was reduced to rubble, and the other factions of the planet didn't fare any better. Doom was eminent, and they feared that their final days were coming...

...And then, one morning in BR 2,010, the people of Endumus awoke to silence. The Blokbots had left Endumus; taken off into space, all of them. In the wake of their near destruction, Baron Fredrick Von Pwyll stood up once again and unified the people...but not just of Brik End Kingdom. This time, Fredrick Von Pwyll unified the entire planet under one flag.

Now the B.E.S.E. look to the stars yet again, soon to be off to expand their empire to other planets....only, this time, they're bringing bigger guns.

The B.E.S.E. has now begun to make their second attempt at colonizing the stars. They know there are more empires out there, as they've run into some trouble from an unknown neighbor that seems to be some sort of remnant of an old Galaktic Empire, the same empire their Farce Knights came from.

Armored man who caries a large vibro-halbard. It is said he beat Santis the Strong in a duel and thus gained his incredible strength. Heroic Powers:

Founder of the great Brik End Kingdom and now Brik End Space Empire, Fredrick Von Pwyll is the real hero of the people. Their devotion to him is unwavering, as is his to them. Though he possesses no real powers, he still manages to attain the status of Hero by being such an unrivaled military commander and fearless warrior. Heroic Powers:

No one knows her name, but she has been with the empire from the start. Since the days of the great tyrant king, before Baron Pwyll tookthe rains, the Sorceress has been protecting her people. Heroic Powers:

The Wizard is said to have been around even longer than the Sorceress, chronicling the events of Endumus' history since the beginning of time. Though his powers have wavered over the years, his wisdom has not. Heroic Powers:

Though not as powerful or charismatic as other heros, Freddy Von Pwyll has always held the loyalty of the B.E.S.E.'s navy. He's a brilliant tactician and a valiant warrior, having more than his fair share of victories on record. Though he isn't quite the leader his father is, he is twice the warrior. Fredrick trained with his father's army and founded the first group of space marines. Heroic Powers: