In B.R. 2002, the Czecho-Slovenian Republik wrested control of their worlds from the Assyrian Star Empire in a war for independence. In B.R. 2003 the CSR fought another war with the ASE that secured their position as a truly independent sovereignty. 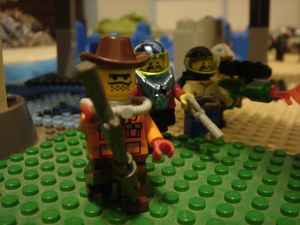 In mid B.R. 2002 there were strange happenings in the beige carpet deserts on the Assyrian world Perseid IV. At the time this was just a small colony, the local militia could not handle the problem on its own. A strange virus of unknown origins, which the Assyrian government will not confirm exists began infecting some of the settlers on the outskirts of the capitol city, Kesmark. These minifigs were turned into what can only be described as rednecks, but the condition possibly has some relationship to Dimmyism. In any case, the redneckified settlers ended up drinking their beer supplies and they acquired pick-up trucks and shotguns and in a blind march they descended upon Kesmark in search of more beer, but really it just turned into chaos. The Perseid militia could not put down the redneck uprising, and more and more of the inhabitants started becoming rednecks. The local governor was forced to request help from the Assyrian Space Force.

Captain Smith was dispatched with a squad of 20 Harvesters to crush the rednecks. At first, their Harvester hovercraft could not be fought by the rednecks; buckshot and small arms fire could not pierce the armour. Scores of rednecks were mowed down by the Harvesters with their homing missiles and their twin machine guns. However, the rednecks improvised and started making rocket-propelled grenades. In a daring attack, the rednecks surrounded 6 of the Harvesters and destroyed them with a barrage of RPGs from the rooftops and a parking garage near the centre of the city. Facing the new weapons, Captain Smith requested back-up, but no other ships came to Perseid IV; the main Assyrian fleet was engaged in a conflict with the Gludavian Raiders at the time. Smith backed his squad out of the downtown area because they couldn't compete against the constantly swelling redneck masses. It was horrible, even educated minifigs like doctors, scientists, and architects were losing their sanity and becoming mindless drunken idiots.

Captain Smith then ordered an evacuation of the planet, anyone with half a brain was to leave immediately. Smith had the rest of his squad guard the road to the Kesmark spaceport so that the civilians who were still sane could flee. In orbit, an Assyrian battleship waited for the evacuation to complete. Once all shuttles had left, Smith returned to the battleship with his squad. Smith was commended for his actions and promoted to Major. But then a new set of orders came in from the Assyrian Viceroy, Dark Blackness, telling them to plasma-bomb the entire city. Lieutenant Major Jackson who was commanding the battleship complied, and Kesmark was destroyed. An untold number of lives were lost.

Some of the civilians on the shuttles witnessed the destruction of their city as they left the atmosphere. They were ferried to other nearby worlds in the Czech Sector where they told the news to the inhabitants. However, a number of the civilians on the escape ships had already been infected and they didn't know it. Shortly after arriving on the other worlds, the redneck disease began to spread. Lt. Major Jackson saw what was going on and declared a quarantine of the 6 other systems in the Czech Sector; no one was allowed in the exclusion zone and no one was allowed out.

A small strike force was sent down to Perseid IV outside of the ruins of Kesmark, to one of the small towns where the virus was thought to have originated. They met heavy resistance but they got what they were looking for. They collected the bodies of three of the rednecks and returned them to the battleship for examination in the quarantine unit. Scientists began examining the bodies to find out what went wrong.

On the other worlds, chaos ensued during the coming weeks. All available Assyrian Space Force patrol vessels sent squads down to their respective planets to kill the rednecks, but it was too little too late. The casualties climbed into the thousands. The uninfected civilians were growing upset after seeing their friends and loved ones becoming infected then in turn killed by the ASE. They figured that something turned them into rednecks, so something ought to be able to turn them back. They wanted to leave the rednecks alone until a cure could be found. A growing movement of these civilians demanded that the ASE stop all military action and await a cure for the disease, but the Assyrians pressed on.

About a month after the redneck uprising began, some civilians from one of the other worlds returned to Perseid IV to see what had become of their former home. There they found that the former rednecks had regained their sanity and were trying to put their lives back together. Apparently, the virus was only a temporary change, and once it ran its course a minifig who had been infected would return to normal. Vindicated in their beliefs, they told the other worlds and the Assyrian Space Force what had happened, but the ASE was callous and they decided to continue to kill the rednecks as they appeared. The civilians on all affected worlds grew angry with the ASE.

They didn't want their friends and family to be gunned down if they would return to sanity about a month after initial infection. They demanded that the ASE withdraw and merely monitor the situation, but orders from Dark Blackness came in saying to continue with the killings.

One man, who only went by Democratus, began to organize the civilians on the Czech worlds. He had an automatic shotgun developed which could penetrate the mimetic armour the Assyrians wore. Democratus trained the old militia soldiers into fighting squads. They adopted the RPGs and trucks the rednecks were using and began to fight the Assyrians. Assyrian soldiers are too well-armed to be defeated by rednecks who have no strategy, but Democratus and his men planned their attacks carefully and began defeating the Assyrians in skirmish after skirmish.

Major Smith was dispatched again, this time to find Democratus and capture him, but Democratus was ready. Smith's squad was defeated and he was forced to withdraw. With Democratus still at large and no Assyrian reinforcements available, Dark Blackness reluctantly ordered the Assyrian Space Force to withdraw to the edge of the exclusion zone.

About 6 months after the first outbreak, the redneck virus had run its course. Absent governance from the ASE, Democratus was able to organize his soldiers and declare martial law in the 7 systems in the exclusion zone, so that new governments could be installed in power on the habitable worlds. Democratus painted the ASE as overbearing dictators and saw public support for him increase because he had stopped the killings and pushed the ASE out of the area. Democratus began a military buildup, knowing the Assyrians would try to take back control of the colonies. When the time was right, Democratus had the newly formed Czecho-Slovenian Republik declare its independence.

Upon receiving this news, Dark Blackness was furious. He left the capitol world Austere with some of his best men, the Commandos, on an assassination mission. Dark Blackness was going to kill Democratus and reinstall Assyrian rule. 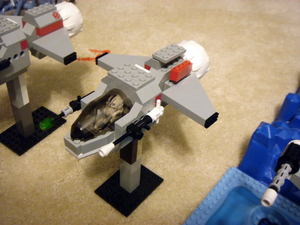 At the opening of B.R. 2003 Dark Blackness arrived with his commando squad, but also reinforcements. They knew the new Czech capitol world Sloveniask was heavily industrialized before the redneck outbreak, so it was only a matter of time before they could begin to produce mass amounts of starships and other heavy weapon platforms. But it was too late, the Czechs had already constructed a sizeable fleet of their new Vostok starfighters. These are short-range fighters with weak weapons, but their numbers were high. They were able to harass the advance fleet of Longinus Corvettes the Assyrians had deployed to secure the space around the Czech worlds. Without support from above, a ground invasion was impossible.

However, Dark Blackness was undeterred, in a daring attack they punched a hole through the Czech fighter swarm around Sloveniask long enough to dispatch his assassination squad and a sizable ground force. While Dark Blackness made his attack, a little-known Captain of a Longinus Corvette also made her mark at the border of the exclusion zone. Captain Natalya scored kill after kill by using her ships main cannon, which would ordinarily be fired at large ships, to incinerate Czech fighters and small transport shuttles that were being used to smuggle in weapons to support the rebellion. She was promoted to Major for her victories.

On the ground, the fighting was fierce, thousands died on each side. Corpses lined the city streets, entire blocks were burned up by laser fire. Dark Blackness and his commandos managed to get inside the Republik Fortress where he confronted Democratus personally. Dark Blackness was a Level 3 Maytricks user, he figured Democratus had no chance, but Democratus had better armour and a jetpack and some Maytricks powers of his own. In single combat, Democratus killed Dark Blackness. It is said that when he died, a black energy dissipated from his body and it evaporated. The Assyrian Viceroy was dead. Without their leader, the Assyrians withdrew.

A treaty was signed between the two states and peace has for the most part continued, although the relationship is strained. Czech forces occasionally deal with the Space Ninjas who are sworn enemies of the ASE, so along the border the ASE occasionally will end up in a skirmish with the Czechs after chasing Space Ninja ships out of their area and into Czech space. This ends the CSR Saga.