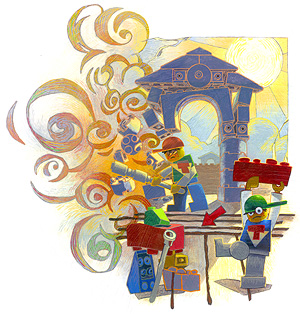 Dimmies destroy quality construction wherever they find it.

Minifig Dimmies, uniformed in the T-shirts and baseball caps of the human FratBoys they seek to emulate, destroy quality construction wherever they find it. They gradually turn their sections of the BrikVerse into endless wastes of shoddy assembly and piles of random elements.

Dimmies where created by an adjunct professor named Cypher in the Myjstik Mountain Time Lab in BR 1,996, using Negaverse radiation to transform innocent minifigs who had been unwittingly exposed to Nega genetiks deep in the past. Their particular mutation is deeply horrifying to regular minifigs, as it causes them to form a frightening growth on the head known as a "nose."

Dimmies, despite appearances, are not undead, since even re-animated skeletons have more brains than they do. (They are a lesser subtype of monster known as "scum", a position they share with Jaw-Jaws and Nega-Blokians.)

Dimmies, despite appearances, are not Undead, since even re-animated skeletons have more brains than they do. (They are a lesser subtype known as "scum of the earth", a position they share with Dungan Jaw-Jaws and Nega-Blokians.)

It has since become apparent that BoB is the true Messiah of all the Dimmies sent to unite them and lead them to war. Dimmies from all across the Brikverse flock to BoB and pledging their total allegiance. A vast army is amassing and it is predicted that shortly mayhem shall ensue.