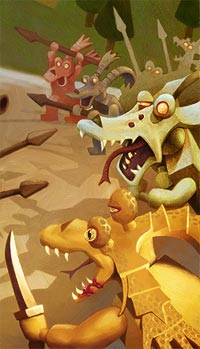 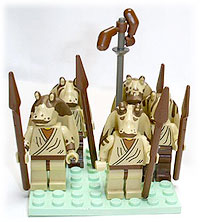 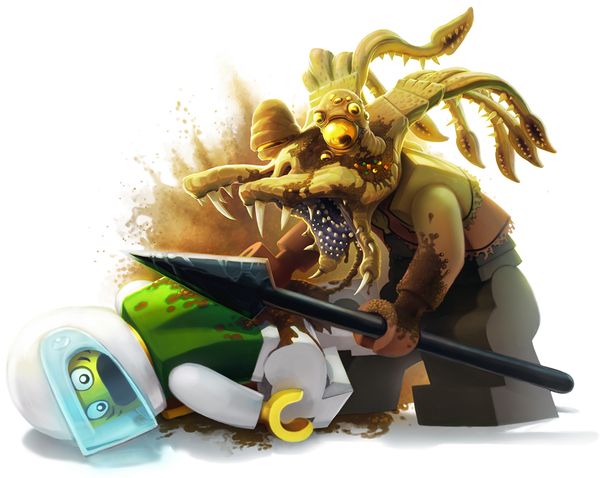 Dungan Jaw-Jaws are among the most savage and disgusting creatures in the BrikVerse, striking terror into the hearts of all minifigs (except for dimmies, who are too dumb to be scared). Apart from their monstrous heads, their slimy, rubbery bodies are roughly minifig-shaped, but otherwise they seem to be some devolved cross between toads, leeches, and lamprey eels. It's unclear whether they are the result of a Magikal experiment gone wrong, some kind of transporter accident in a rotting swamp, or monstrosities created by BrikThulhu in order to troll minifig-kind.

As an amphibious species of Poopacabras, Jaw-Jaws are coprophages, feeding exclusively on excrement. Encountered rarely in the wild, their hunger for raw sewage draws them into metropolitan sewers where they build great nests of detritus and debris, sometimes breeding massive Jaw-Jaw infestations if not exterminated quickly. They can be drawn out by the scent of a live shitgoat, which they find irresistible.

Although Jaw-Jaws prefer the waste products of other creatures, they can survive on their own poop for weeks at a time if necessary. They are capable of regenerating limbs and heads over time unless the bodies are burned. If kept away from sewage and moisture, Jaw-Jaws will eventually dehydrate, drying up like sponges. Although they appear to be dead, they can be reactivated years or even centuries later by just adding water.

Although Jaw-Jaws don't eat the flesh of minifigs, they have a poisonous bite that both paralyzes its victims over time and promotes defecation, allowing the creature to latch onto their helpless bodies with its lamprey-like mouth and parasitically suck out the intestinal contents.

Larger Jaw-Jaw infestations show evidence of Dungan poop-worshipping religious practices, gathering in orgiastic rituals to worship poo crucified on a stick. This crucifix serves the Dungans as both an object of reverence and a deadly weapon, and they attribute their regenerative abilities to the Poo's messianic powers and omnipresence.

Hieroglyphic writing smeared on the sewer walls is consistent between nests, serving as communal transcriptions of the Dungan holy scriptures. A translated screenplay adaptation of these hieroglyphs resulted in the brief but unexpectedly successful Dungan cult film, "Two Girls One Cup."

The Jaw-Jaws were almost wiped out in the First Space War.