Poo on a Stick 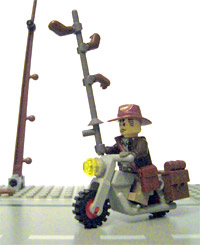 Poo on a Stick is an extremely powerful holy icon, usually seen employed by the disgusting Dungan Jaw-Jaws. To them, the Poo represents a revered way of life, covered in bodily filth, and it guides them ever toward such a promised future. Against normal minifigs and the other creatures of the BrikVerse, it has the power of extreme repulsion. No one wants to get splattered with feces, of course, but the Crucified Poo magnifies that feeling a thousand fold. If the Dungans were smarter, they could use this incredible power to control a battlefield. Their savagery, however, only drives them to blanket the battlefield in scat. Of course, the Poo urges the basest, grossest desires in all who are near and those who wield it, especially if they are Dungans, flow across the battlefield like raw sewer sludge and envelop all in their path with the warm, slimy embrace of semi-chunky diarrhea. Few can escape the far reaching effects of the Crucified Poo's power and those who oppose it find themselves desperately clawing for clean ground, retching and wild-eyed.