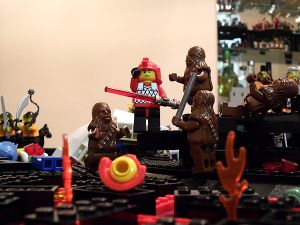 A lone Vol speaks his death prayer as shitgoats close in.

Shitgoats are beast-like primitives who are permanently covered in filth. No one knows what they look like underneath the crap-matted fur, or why they coat themselves in offal, because no one has ever experienced any interest in investigating more closely.

The shitgoats' shitcoats are believed by some to act as an alternate form of Fudge, protecting them from Rules Lawyers and Being Reasonable. Unfortunately for the shitgoats, it also makes them irresistibly delicious to Dungan Jaw-Jaws, who will follow their scent for miles. Captured shitgoats make excellent bait for drawing Dungans out of their sewer nests for extermination.

The first shitgoat to be known by name was solvess, later followed by SnakeMittens. Their shitgoat nature became apparent during attempts at mudslinging went wrong, leading some to believe that mudslinging is essential to a shitgoat conversion process, or that shitgoats cover themselves in filth as a means of stockpiling ammunition.

Shitgoats were among the several dozen factions battling for Maniac Beer during the Assault on Goatse Bunker.