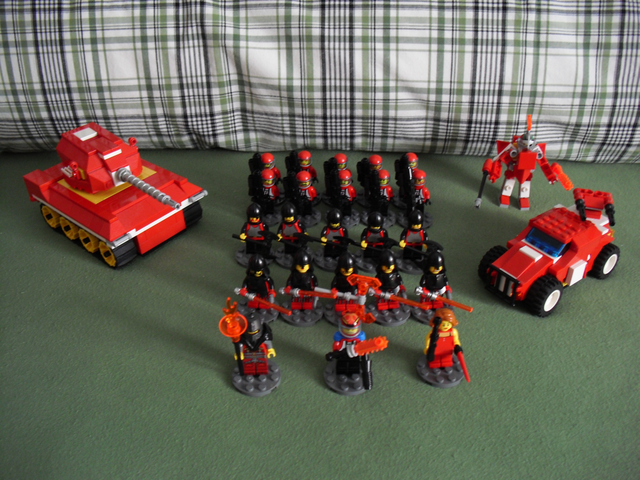 The Greater Empire of Lietuva emerged from the National Front of Lietuva (not to be confused with the defunct Lietuvan National Front), an ultra-nationalist paramilitary organization, which managed to overthrow the Soviet puppet government on Planet Vilnius and enforce their own agenda.

Thousands of years ago, the Duchy of Lietuva controlled a huge piece of land inside the Purple Sector, which were devastated from recent Immortal raids, however. Lietuva was considered a bastion of Paganism, until the Teutonic Knights invaded their lands, after occupying several Polish territories. In order to repel the Teuton aggression, the Lietuvans allied themselves with the Poles and decided to adopt the faith of the Great Creator.

After successfully crushing the Teuton Order state, the Kingdom of Poland and the Duchy of Lietuva merged into one huge state known as the Noble Republic of Poland and Lietuva (pl.: Polsko-Litewska Rzeczpospolita Szlachetna). While huge in size, the unique governmental form of the Noble Republic was massively flawed, granting the Nobles more rights, than the actual king and hindering him more and more from efficiently leading his country, as the years passed. It was just a matter of time, until every neighbouring country decided to attack these lands and claim them for themselves. After a long period of brutal strife and exhaustion, the USSSR managed to conquer these lands and implement several puppet government, inside.

In BR 2,015, several rebel organizations tried to overthrow the Soviet puppet government on Planet Vilnius, which only the National Front of Lietuva under Vytautas Blinda managed. Because he had tight contacts to the ASE, he received tons of modern military equipment, which gave him a decisive advantage over the other rebel groups, such as the Lietuvan National Front. After Blinda took over, he implemented a Fascist government and pursues to conquer the lands, that once belonged to the Duchy of Lietuva, ages ago.

The following BR the Lietuvans attacked the Byelorussian SSSR, while the Intermarium Coalition was busy with defending the Magyar homeworlds. Due to being careful by not attacking the Poles they avoided having to deal with them altogether, until a captain of a border patrol made the mistake of firing at an unarmed Polish freighter. That action provoked the Polish attack on Byelorussia and lead to the execution of said captain. During the Byelorussian campaign, the Lietuvans managed to obtain the samples of the Weedkiller, a highly aggressive bio-weapon that can vanquish an entire planets life within hours.

As Generalisimas Blinda took over, live for the Lietuvan population has improved, while several minorities have to face oppression and discrimination, everyday. Every opinion has to undergo tight censorship and every critics of the new regime have to remain silent or face capital punishment. Furthermore, Baltic Paganism has been endorsed as the new state religion, as it is seen by the government as the true faith of the Lietuvan people.