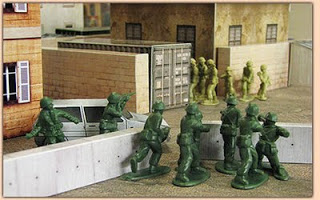 Toy Soldiers, also often called Army Men, are militaristic, aggressive, hardasses who have been displaced from their own Universe and dropped into the BrikVerse. They come in many varieties, regularly complete with tomes of rules, regulations, and codices. They are meticulously statted, painted, and positioned for maximum lethality. Minifigs want to like them, of course. Another someone to battle and create mayhem with always sounds fun to them. But the reality is that the only Toy Soldiers minifigs usually come to like are Green Army Men. Those guys know how to party. The rest of them are too stuffy and regulated for minifigs to tolerate for long.

One of the primary points of contention between Toy Soldiers and Minifigs is the Toy Soldier's propensity for gauging combat in terms of winners, losers, and victory conditions. Most minifigs aren't even aware that there are sides in a battle, so long as there is an opportunity to commit gross violence, let alone winners and losers. Toy Soldiers are geared toward winning and they will do everything in their power to shut down an opponent in order to win a fight. Where minifigs always seek to maximize casualties, Toy Soldiers seek to minimize. Where minifigs revel joyously in wanton destruction, Toy Soldiers attack with purposeful, grim determination. In short, Toy Soldiers are the some of the biggest Anoraks in the BrikVerse.

Toy Soldiers don't have access to Feats or Fudge or any of that. Their regulations would never allow such balderdash. They do, however, have access to an endless list of circumstance triggered special rules and equipment. In the BrikVerse, this has created a warped power effect (likely having to do with their disassociative quantum signatures) wherein reality tends to become locked down and depressingly deadened. Rules tend to have more weight and meaning when Toy Soldiers are around and they are exceptionally good at bending those rules to their own ends. Only the joyous lust for chaos in the minifig heart seems capable of at all resisting this and restoring the BrikVerse to its proper imbalance.